Headed to the bus station this morning to catch the 9.15am bus to Pushkar. Got there early as we got told a variety of departure times from different people. Whilst waiting for our direct bus, we got to people watch and spent a very uncomfortable moment watching a man on a bus who watched us and appeared to… (fill in the blank yourself). Thankfully, his bus pulled off quickly (as did he – bazinga!!) and was replaced by our empty bus. We actually got a three person seat to ourselves! It is the little things in life that please us.

4.5 hours, 3 traffic jams, a deviation down a railway track and driving past a horrid accident later (FYI – tuktuks aren’t made for going into the back of lorries), we made it to Pushkar. Said to be where Brahma dropped a lotus flower, Pushkar is a compact Hindu pilgrimage town built around a sacred lake.

I’d like to say we did something exciting but once we got to the hotel and had some lunch, we just stayed on the rooftop terrace and enjoyed the view. 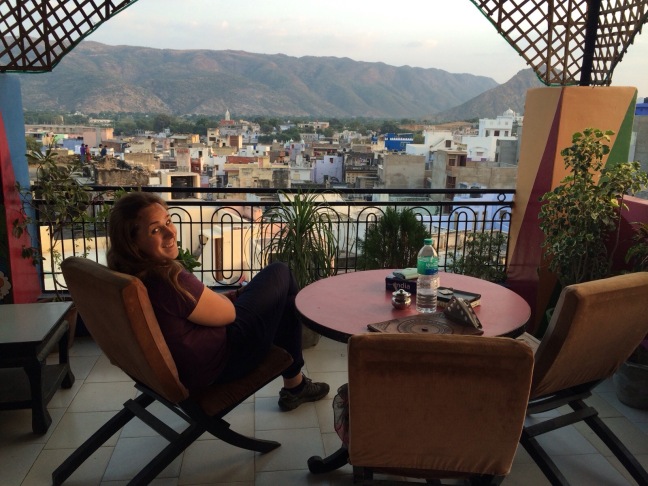 Some much needed time chilling out, drinking milkshakes, watching monkeys jump amongst the rooftops and reading books was how the afternoon was spent!

After the sun set, there were a few fireworks set off that looked amazing against the fairy lit hill-top temple.