Decided to spend the day exploring Ahmedabad. The city itself has a long history and many remarkable old-world charm buildings although they get a little bit lost in the crowding and noise of the modern era. Wanted to head out to the local stepwell, after yesterday’s amazing one! Managed to get a TukTuk who agreed to take us for 40INR (a little too easily!!) however it soon became apparent that he had no idea where he was going or what he agreed the fare to be! A couple of stops to find someone who spoke Hindi and English to help him make absolutely sure that we wanted to go to a place that clearly no one ever goes to! Arrived at a very fascinating but equally eerie place. Built in 1499 by a woman of Sultan Begara’s harem, Dada Hari Wav has steps to lower platforms and ends at a small octagonal well.

It was absolutely deserted and we got to explore all the different levels and staircases filled with bats, most of which didn’t appreciate visitors so began flying around everywhere!! Two local guys turned up at one point and made us feel a bit uncomfortable – trying to point out different things and telling us to follow them. A firm ‘no’ and they, thankfully, left us alone. 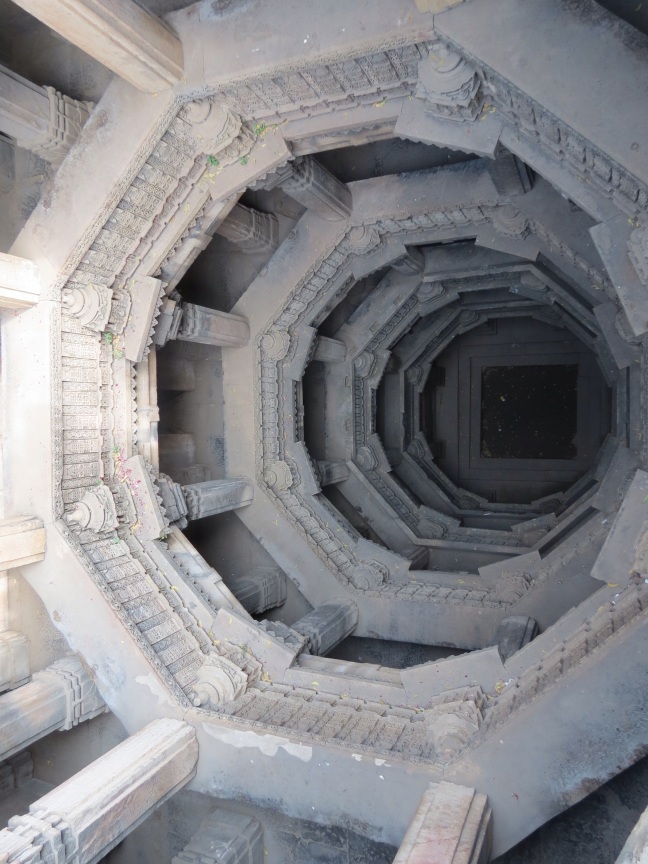 Came up the steps to wander around the top and watched the monkeys sunbathing. Attached to the stepwell are 2 Mosques. As we got closer, an old man came out and began to show us around. The first Mosque had several tombs inside (and a load of scaffolding poles!!!). Was very bizarre. The second Mosque was beautifully decorated with stone engravings. The ‘caretaker’ let me climb up onto the roof whilst he showed Jayne the crypt/store room underneath the Mosque courtyard. It was beautiful to enjoy somewhere so calm and quiet. 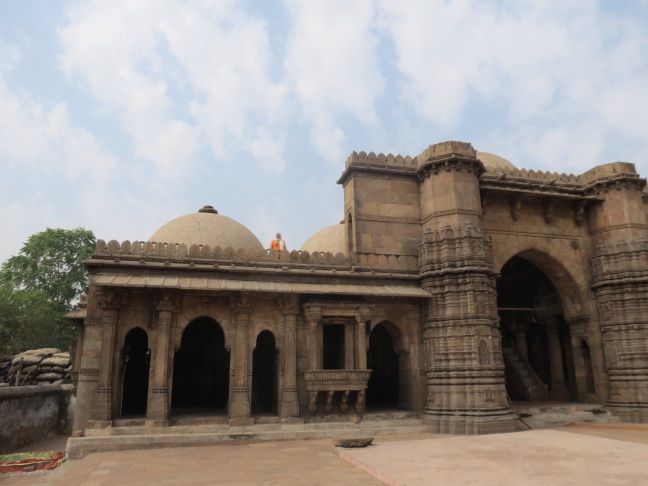 Decided to walk towards the Calico Museum of Textiles. En route we came across a supermarket (which are rare in India) and decided to stock up on some toiletries. Having destroyed my feet recently by constantly scrubbing them in soap to get the street grim off, I decided to get some body cream. Jayne tried to convince me to get the cream that had SPF in it – I had to keep pointing out to her that it was also whitening cream… She’s so jealous of my flip flop tan marks. She’ll do anything to get rid of them!!! Continued our way to the museum. Heard it contained one of the worlds finest collections of antique and modern Indian textiles so we were really interested in visiting. What we didn’t know is that you have to book, in advance, your entrance to the museum – they only allow 20 people in a day and they get booked up weeks/months in advance. So, we had to rethink our plans! As we were both literally melting in the heat and baring in mind that we had already done/tried to do most of the city’s major ‘tourist’ attractions, we thought we might cool off at the cinema. Decided to head to the ‘multiplex’ as it seemed that the name suggested it might have more films so flagged down a TukTuk. Again, we easily negotiated a price for our chosen destination until, 2 minutes in, the driver stopped and asked someone to help! Seems like they are willing to agree a price first and then work out where we are headed after!! Unfortunately, despite asking for directions, the driver still had no idea where he was going so Jayne had to navigate him using her MapsMe app. It was hilarious watching her trying to tell him where to go – but the driver seemed to love it! Lots of thumbs up, laughing and smiling. Once at the cinema, it became apparent that, although the ‘multiplex’ DID have lots of films, they were all in Hindi!! Decided to walk to the next cinema to try our luck there. The Himalayan Mall cinema had ‘Spectre’ in English(!) but we had to wait 3 hours before it started. Luckily, there was a McDonalds where we were able to buy some food in exchange for their free wifi which we used to booked our accommodation in Mumbai.
The 18.30 showing of ‘Spectre’ was in the Embony Lounge… It was amazing. Massive, super soft reclining seats, food service to your seat and an interval in the middle to stock up on goodies – all for £3 each. 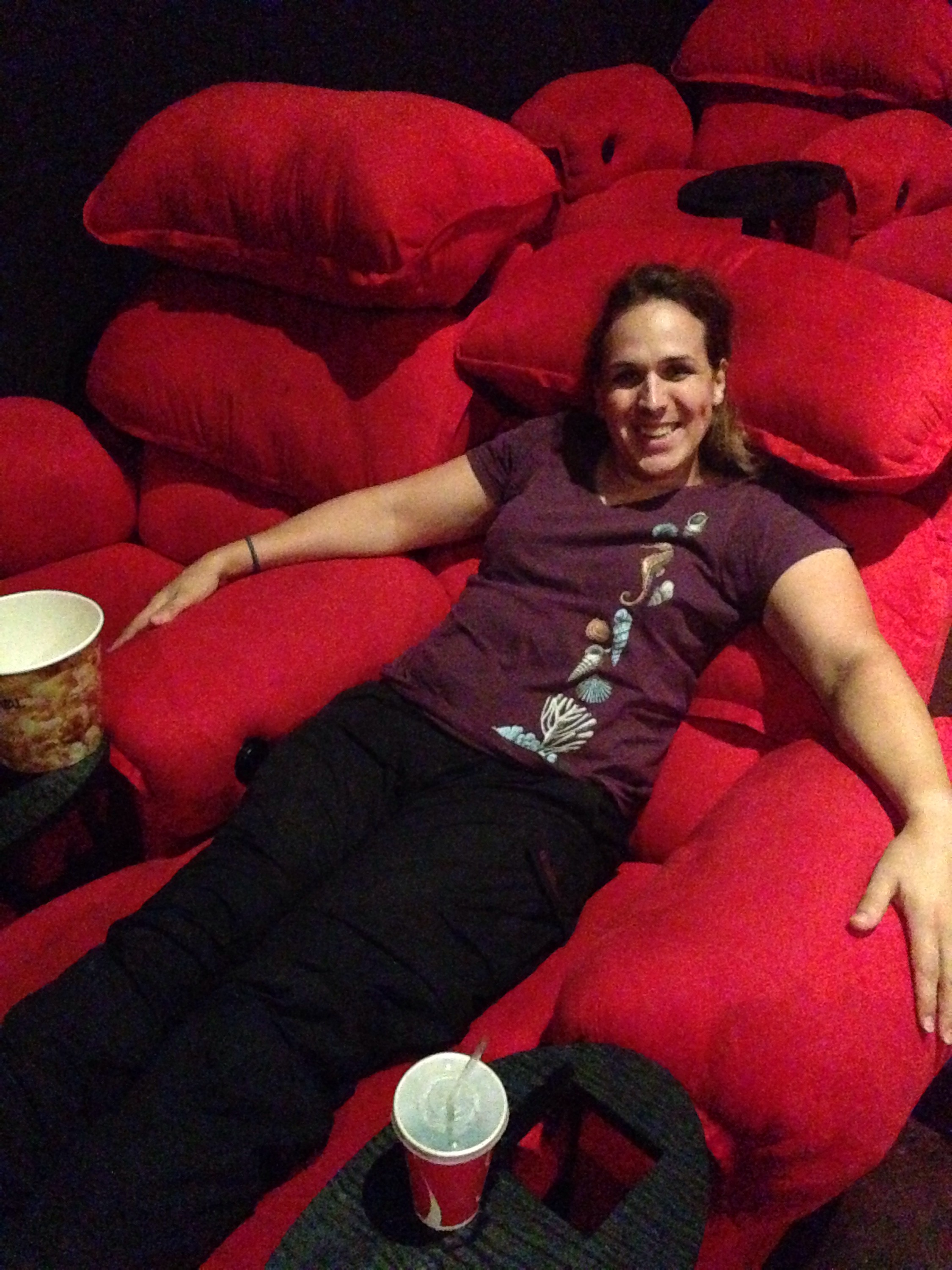 The film was pretty good too, for a James Bond movie (Jayne is despairing at me for writing that!!). Got a TukTuk back home (he knew where he was going!!) and had a much needed shower before heading to bed.