Set our alarms for 3.45 so that we didn’t miss our station stop. Turns out that the train was running an hour late at that point (really need to start learning Hindi!!) so Jayne could have had an extra hours sleep on the train and I could have lay there trying to sleep! Arrived in Aurangabad at 5am and decided that since we were up and couldn’t check into our hotel until noon that we should make the 105km journey to see the Buddhist Caves of Ajanta. 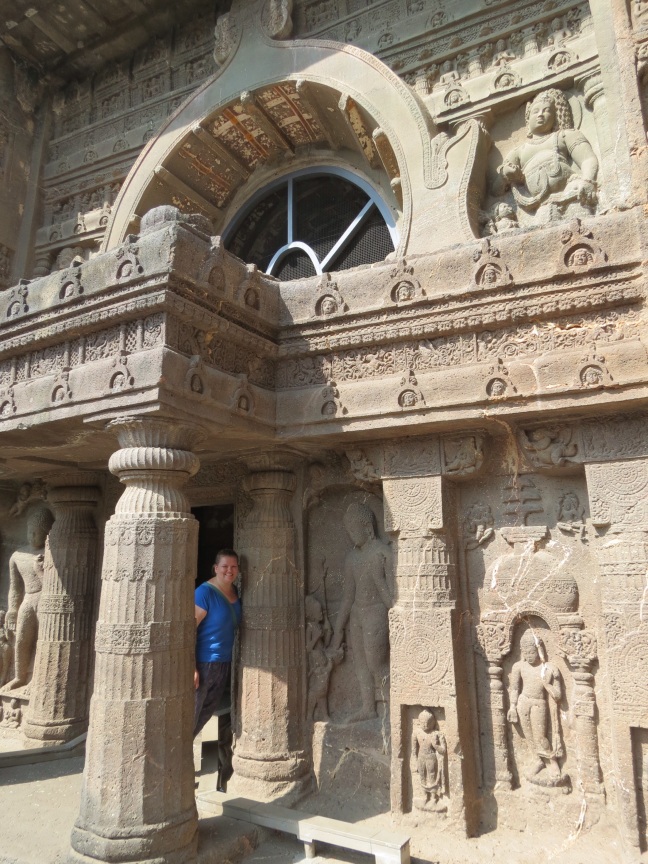 Another UNESCO World Heritage site, the secluded caves date from around the 2nd century BC to the 6th century AD and were amongst the earliest monastic institutions to come up in India. The site was abandoned, as Buddism gradually waned, to be discovered in 1819 by a British hunting party, led by John Smith. The paintings in the caves remain in an incredibly good state of preservation today, most likely due to the fact that the caves had relative isolation from humanities for centuries.

There are 30 caves that are situated in the steep face of a horseshoe-shaped rock gorge which overlooks a river below. Seven of the caves are closed or inaccessible but we were able to visit the rest of the caves.

Five of the caves are chaityas (shrines or objects of worship/hall divided in to a central naive and 2 side aisles by a line of columns with a votive Stupa at the end). 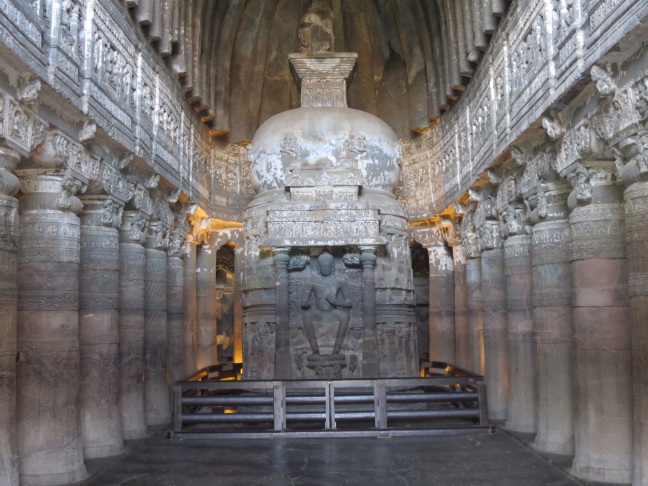 The other 25 caves are viharas (Buddhist monastery, with a central court and a Buddha shrine at the end – most around 5m high). The artwork on the walls of the caves depicts scenes from various stories surrounding Buddha and many of the caves have small crater-like holes on the floors, which acted as colour palettes during paint jobs. 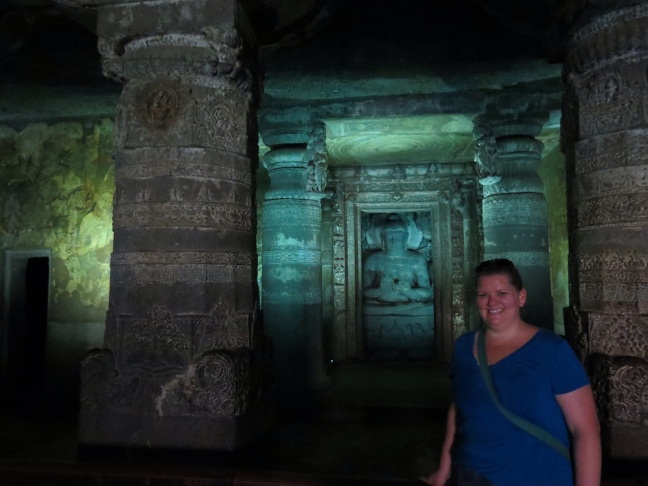 The most impressive one was cave 6 as it is the only two-storey vihara at Ajanta with a seated Buddha downstairs and upstairs is surrounded by cells with beautiful paintings on the doorways. The stairs up to the second floor were a little steep… Jayne had to come down them backwards (the security guard who came to ‘help’ seemed most impressed by her arse!!). The other cave we liked was cave 24. If it had been finished, it would have been the largest vihara at Ajanta but it is unfinished so you can see what the caves might have looked like before the Buddhist monks began breaking through the rock and carving the sculptures. As we were alone, I decided to have a cheeky, quiet, lady-like fart… Unfortunately, the echo around the caves made it sound like a monster fart – much to Jayne’s amusement – it sounded like a small bomb exploding!! Once we’d finished at the caves, we headed back down the mountain and went to explore the visitors centre. Very weird but clearly well developed – we think it might be there for tourists who turn up to visit the caves when it is closed on Mondays. They had replica caves, detailed descriptions and video tours of the caves. As we were both slowly succumbing to the tiredness from lack of sleep and the heat, we decided to head back to Aurangabad. Despite protests from the TukTuk drivers, who were insisting that they needed to drive us 2km to the bus station, we crossed the road and I stuck my hand out – 20 seconds later, we were on a bus headed in the right direction!! Checked in at the hotel, had a shower and watched ‘The Inbetweeners 2’ on the netbook in a semi-comatosed state. Dragged ourselves out for dinner and treated ourselves to an ice cream before heading back to bed and, hopefully, a good nights sleep!