Spent our morning packing our bags and watching ‘Criminal Minds’ (our new favourite past time when checking out of hotels!!). Had a ‘proper’ lunch of noodles and a grilled cheese vegetable (cucumber and tomato) sandwich before heading to the train station to catch our 10 hour train to Bhopal. 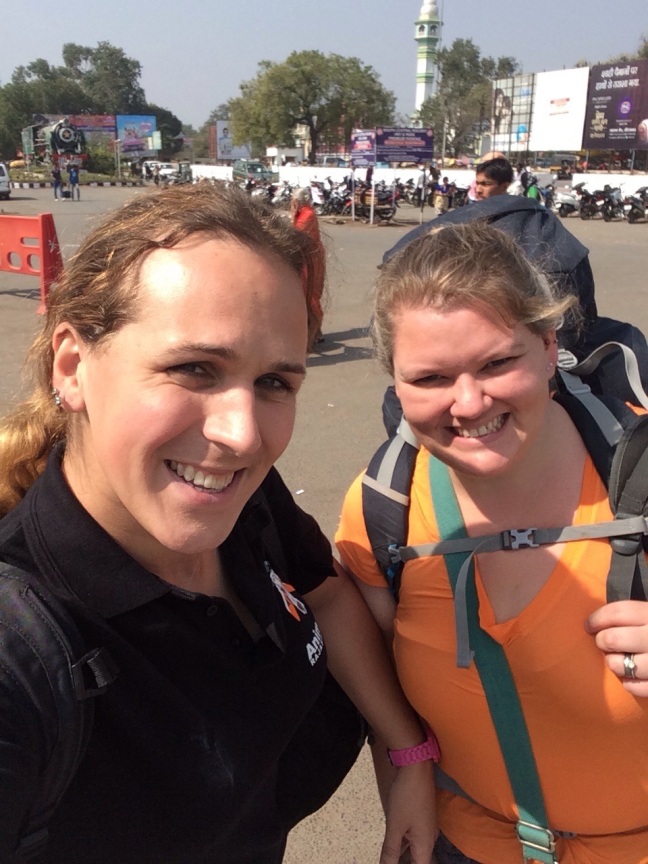 Jayne abandoned me on the platform with the bags to go to the ATM and came back with no money (no money in the machine!) but with tonnes of fruit! She managed to haggle with the local fruit lady to get 1kg guavas for 30INR (30p) and then got surrounded by other vendors trying to sell her more fruit at local prices. She got a full carrier bag full of grapes for 100INR (£1) and was so proud of herself when she came back to me – especially since I clearly got screwed over when I paid 80INR for my fruit in Ahmedabad. Determined to prove I wasn’t a soft touch, I went in search of bottled water to take on the train with us. Got 2 bottles, saw that the bottle of water said 5INR on it and started arguing with the vendor when he tried to charge me 15INR each. He looked at me with pity and said ‘the one has come off’ and showed me the other bottle which clearly had 15INR written on it – Jayne was beside herself!! Got on the train and found our seats only to find an old Indian man snoring on my bunk. We stowed our luggage under the seat and, after a brief bit of confusion with another passenger who thought we had the same seat number as him, the old man woke up. Turns out he was the train goods guard (nowhere near the goods carriage, might we add). He wasn’t particularly impressed that we asked him to move – in fact, it took the 4 other guys in our compartment to convince him to move his arse so Jayne and I could sit down!

It was a 10 hour train journey from Aurangabad to Bhopal. Jayne saw that one of the guys in our compartment had films on his computer and, after a quick chat, the two of them spent some time swapping films – he was very keen to have my crappy dance films(!) and we took his Disney and Hollywood classics. We then settled into the journey and watched the first three ‘Pirate of the Caribbean’ films. Ate train station samosas and where slightly jealous when the guys had a tali curry delivered to the carriage from a local restaurant at one of the stops (although it still doesn’t beat the Dominoes pizza delivery guy on the train to Mumbai!!). Arrived in Bhopal around 1.30am. Walked to the hotel, which seemed like a good idea since we’d been sat down for so long but we probably should have taken a TukTuk. Both felt a bit uncomfortable at times but we arrived safely. Had to hang around in reception with lots of staff watching us (intently) whilst they ‘got our room ready’ – don’t think they were really expecting us, despite our booking and email to let them know what time we would be arriving! The room is… Interesting. A massive suite with sofa area and huge double bed but the smallest bathroom ever with a squat toilet and the shower is a bucket and a tap! Locked the bathroom door from the outside and, after locking the front door, put the coffee table in front of it – just to make sure we woke up alone!