Had set our alarms early with the intention of getting up to visit Sanchi but when they went off we both decided that neither of us had slept very well and it probably wasn’t a smart move to push ourselves to head out. So, we rolled back over and went back to sleep for a couple more hours. Got up and started brainstorming plans for the next fews days and over the Christmas period, trying to work out where we would be and what we could do. Headed out of the hotel – the area looking decidedly nicer in the daytime than at 2am in the morning!! Went to the nearby Internet cafe to investigate train times to our next planned town. Worked out we could get an overnight train in 2 days from Bhopal to Kharujaho so we don’t have to stay an extra night in our hotel as we can sightsee during the day and sleep on the train at night. Headed to the train station to buy our tickets. Decided to get some money out of the ATM en route and both got a bit worried after six rejected transactions from different ATMs. Managed to get cash out of the train station ATM which made us both feel much better – think the ATMs where just being supper fussy. Jayne wanted to keep the puppies that were outside the ATM building but they ran off whilst I was getting money… Oh dear! Queued for an hour and a half to get our train tickets in a crowded, stuffy hall. Neither of us were coping with it very well, especially when someone decided to cut the line in front of us! Jayne asked him what he was doing at which point he pointed at a sign written in Hindi and said ‘you can’t read Hindi – it says I can’. I thought Jayne was going to hit him whilst I was seriously considering ‘tripping over’ and stabbing my pen into his leg!! Anyway, got to the front of the line and got waiting-line tickets (they had sold out during the time we had been waiting). Apparently, since we are number 1 and 2 in the wait queue, we are pretty much guaranteed our tickets but we just have to wait until there is a cancellation. Since it’s in 2 days time, we decided to risk it knowing that we’d get a full refund if we don’t get tickets. A quick tour of the station to find out where to check our ticket status and the luggage lockers, we then headed to the bus station to make sure the bus to Sanchi left from there and at what time. We decided to buy an additional lock and key from a tool shop for the lockers at the station, wanting something more secure than our little combination locks that we have for the big bags. Headed to a restaurant for a late lunch / early dinner before swinging back to the Internet cafe to book accommodation for the next week or so and plan our other transport between towns. 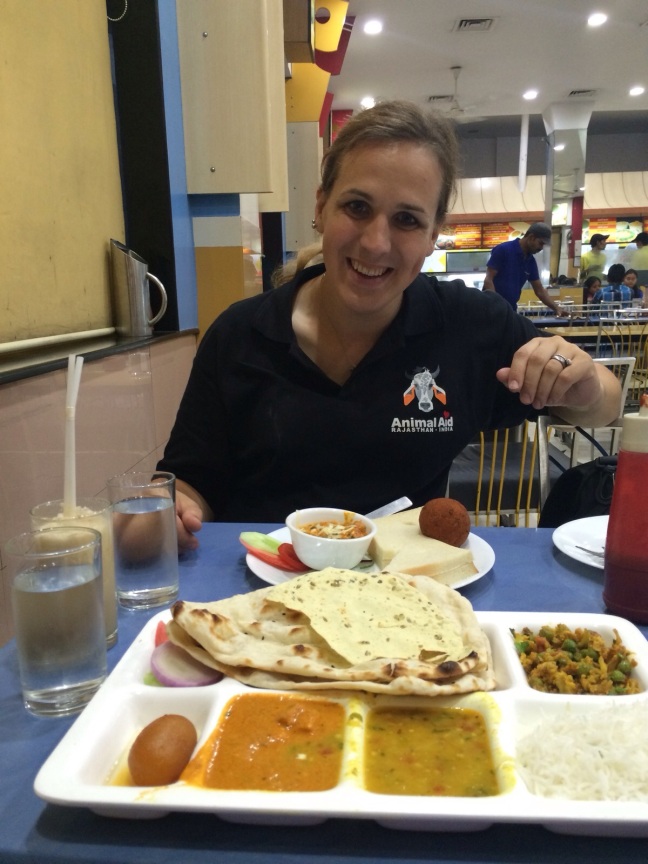 Jayne went back to book another train ticket (Satna to Varanasi) whilst I looked at busses and hotels. Came back to the hotel and put on the radio. Listened to a truly fantastic remix of an Indian version of ‘Gangnam Style’, the hit from the film ‘Shandaar’ we saw in Jaipur and headed to bed ready for an at attempt Sanchi tomorrow.