Got up early again to check out of our ‘hotel’. We not only had water but we also had hot water so this mornings shower was decidedly much nicer than yesterday’s  ‘wash’!! As we checked out, we seemed to have every member of staff from the hotel and the adjoining restaurant come and see us off – for such a dirty hotel, it had a remarkable amount of cleaning staff! Headed towards the train station to stow our bags in the storage lockers. Sorted it out relatively quickly and then went to find our bus out of the city. Having asked at the bus station yesterday, we were told to get a bus from the train station. After checking with a few buses, one driver got off his bus and took us to another one which he and the new conductor assured us was going to Obaidullaganj – the nearest town to Bhimbetka cave shelters. Got on the (very) small bus, which was so packed by the time we were 50m down the road that two people were hanging out of the door. After about 6km, the bus stopped and the conductor told us to get out. Knowing full well we were nowhere near where we needed to be, we began to object. He then said ‘catch bus other side of the train tracks’… Which was fine, except we had paid him enough to take us much further. Jayne asked for some money back, at which point he conveniently seemed unable to speak English. Luckily some ladies on the bus helped us but not before Jayne jumped back onto the bus to stop it pulling away from us! Crossed the train tracks, both slightly nervous at this point that it had taken us an hour to get 6km and we had to be back at the train station before 8pm to see whether we had got waiting list train seats on our train. Managed to cross the incredibly busy road and saw a group of buses down the road. Found one that was going our way and, after a slightly dodgy moment where the bus conductor had to check with another passenger that the bus was headed to where we wanted to go, we were on our way! The journey was relatively painless (aside from the changing of a tyre to one that equally had a hole in it!). From this point onwards but we were both constantly checking the MapsMe app as we were worried. The bus conductor got the bus to stop directly outside the entrance to the road we needed to take up to the rock shelters and after a 3km walk up the road, we were at another UNESCO World Heritage Site. Hidden in a masse of craggy cliffs and forest, Bhimbetka has more than 700 rock shelters. 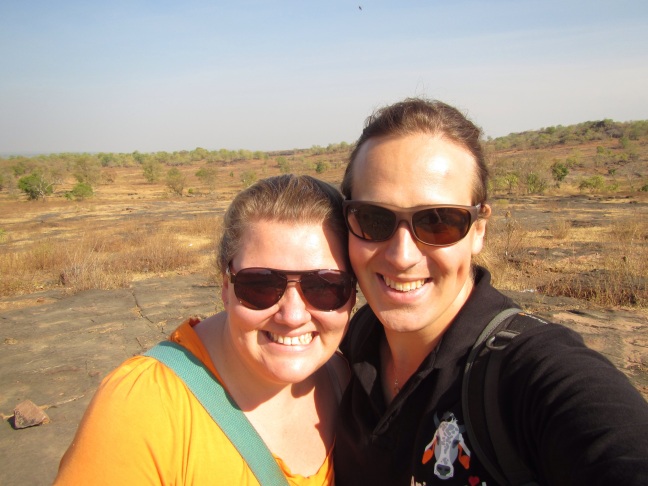 Around 500 of them contain some of the world’s oldest prehistoric paintings. We only visited the most accessible 15 of these rock shelters but it seemed like the others were cornered off. Due to the natural pigments of ochre, white, green and black, the drawings are incredibly well preserved. The oldest paintings in red, often of huge animals, are thought to be 12,000 years old.

We spent about 2 hours walking around the 15 rock shelters just looking at the different drawings, trying to work out what some of the images were and enjoying the quiet. The place was surprisingly empty – we saw one tourist group (a group of French tourists who chatted to us for a bit) and a few Indians who rushed around the site before leaving. Our favourite rock shelters were number 4 which is called Zoo Rock Shelter as it has over 400 drawings of different animals including a hunting scene and a royal procession.

Our other favourite was shelter 15 which had a huge magnificent red bison attacking a helpless stick figure. Once we’d finished, we walked the 3km back towards the main road, slightly nervous as we’d heard that getting back to Bhopal could be difficult (especially given this mornings bus journey!). I managed to wave down a bus within 2 minutes that took us to the outskirts of Bhopal and then we caught another bus back to the train station. Very simple, all things considered! Went to have some food and lots to drink before going back to the Internet cafe to check emails, Facebook etc. and kill some time before our train. Checked online whether we actually had tickets for our train – which we did! Don’t think I realised how worried I was about the gamble of waiting list tickets. Possibly not something I’d do again in a hurry!! Went back to the train station and took it easy before jumping on our train at 9pm heading to Jhansi.