Despite not sleeping properly for the second night in a row, we set the alarm and headed out early to visit ‘the holiest place on earth’ – the Mahabodhi temple. Fortunately it is, quite literally, across the road from our hotel so we handed in our mobiles and walked in. The temple is situated at the place where, 2600 years ago, Prince Siddhartha Gautama attained enlightenment beneath a bodhi tree and became Buddha. The original Mahabodhi temple is believed to have been built by Emperor Ashoka about 250 years after Buddha’s enlightenment. A newer temple was built there 800 years later but was destroyed by 11-century Muslim invaders. The present temple was restored in 1883 but there is still part of a stone railing surrounding the temple which is the only ancient remains on the site.

The bodhi tree is still there although legend says that the original tree was destroyed by Emperor Ashoka’s angry wife who was jealous of her husbands attention towards it. Fortunately, their daughter took a sapling to Sri Lanka, where the tree still grows. A cutting from that tree was then brought back to Bodhgaya and planted in the same place where the original stood, alongside a red sandstone slab that marks the spot of Buddha’s enlightenment (known as the Vajrasan or Diamond Throne). 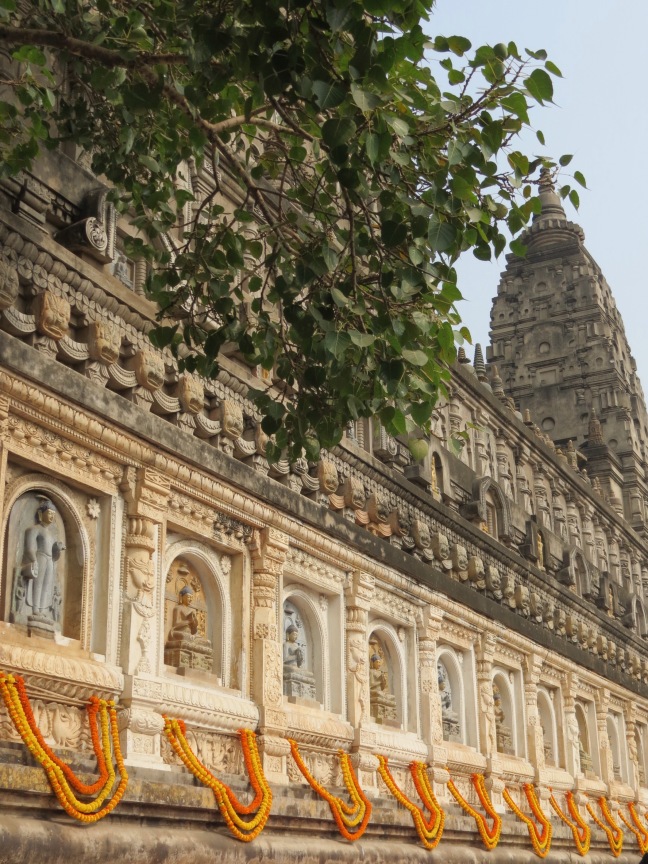 The temple complex itself was really nice. There was a sea of maroon and yellow robes in every direction as Buddhist monks from around the world came to pray and meditate.

We spent a long time wandering around the outside of the temple, trying to find all the seven different places where Buddha spent his weeks after his enlightenment. Jayne got chatting to an elderly Buddhist monk who declared his undying love for her because she was tall and strong. We then queued up to enter the main temple which is when our day unfortunately took a slightly darker turn. As we waited to see the Buddha statue inside and listened to the monks chanting, I noticed the Indian security guard putting things into his pockets. He then stood opposite us, emptied his pockets of the Buddhist food offerings and put them in his bag (either to take home or to resell to the shop). Feeling appalled that someone would steal from a temple alter, we decided to head round the back of the temple to the bodhi tree. As we sat contemplating what we just witnessed, a leaf from the tree fell to the ground. The Buddhists scrambled after it like bridesmaids after the bouquet at a wedding!! I don’t think either of us realised how important this tree was/is to Buddhism. We then saw an Indian man climb up the railings and start picking leaves off the tree. He was told to get down by the security guard but the man climbed up again as soon as the security guard turned his back. Totally despairing for humanity at this point, I felt a bit teary so we decided to leave and walk to the 25 metre tall statue of Buddha.

Unveiled by the Dalai Lama in 1989, the statue is located in a small garden and is surrounded by 10 smaller statues of Buddha’s disciples. We then visited some of the numerous monasteries and temples that are dotted around the town which have been constructed by various countries. The Bhutan one was so beautiful and detailed compared to the plain simple construction of the Japanese temple next door.

It was fascinating to see how each country has put its own spin on Buddhist temples and you can definitely see the influences from each country and culture. Managed to get into the Vietnamese temple before it closed and got to watch them ringing the bell – headed back to the hotel to grab our fleeces before going to a Thai restaurant for dinner. Stuffed ourselves with pad Thai noodles, green Thai curry and papaya salad – which was a much needed change of cuisine!