A wild Bengal Tiger, in the Sundarbans jungle, in the Bay of Bengal… A day we will remember for a very, very long time!!

Reluctantly woke up from the best nights sleep we’d had in a while to leave the Eco village at 6.30am. Jumped onto a much sturdier and more comfortable boat to begin our day long trip sailing through the mangrove forest. We started by stopping off twice to other islands for our guide could pick up fish for lunch, our permits to enter the nature reserve and a local guide. We sailed through the mangroves keeping a beady eye open for any wildlife, having been told that it was extremely rare to see a tiger as the mangrove forest is very dense and we can only disembark the boat at specific watchtowers. Our boat suddenly did a 360 degree turn after about an hour and the local guide pointed out a water monitor lizard nestled in the hollow of a tree – managed to get a few photos before it tucked itself away out of sight. 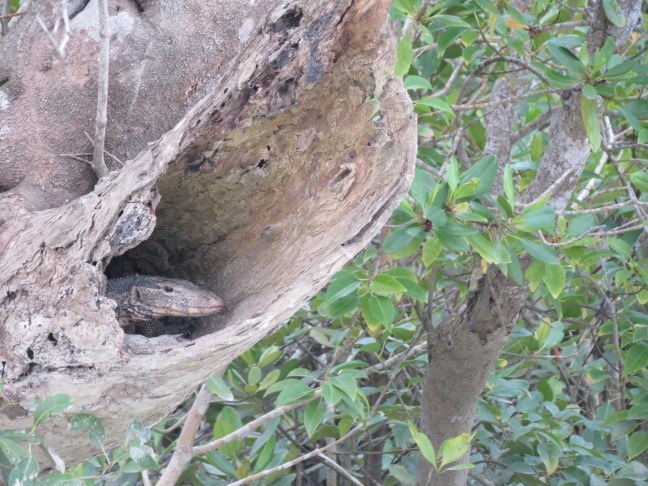 Continued along the river and we saw wild spotted deer eating near the river bank. Joked with some of the other passengers that it would be great if the deer could be used like the goat in Jurassic Park to entice the tiger our into the open! No such lunch, although as we continued our guide called our ‘tiger food’… Of course, all of us only heard ‘tiger’ so we weren’t too impressed with Om when he pointed out more wild spotted deer (even if it was amazing to see them!).

We pulled over to our first watchtower of the day. We had been told that tigers have been known to visit the area as deer often visit and there is a fresh water source available, providing the tigers with both food and water! As we headed up to the top of the watchtower another boat arrived with a group of loud Indians. Our guide despaired that they were making so much noise and even the young Indians in our group (who now live in the USA) couldn’t believe that they hadn’t been told to shut up! We got to see kingfishers, mud crabs and other birds along with deer tracks in the mud. Got back onto our boat and immediately spotted a crocodile relaxing in the mud on the bank opposite the watchtower. Could really understand why they are considered such a deadly animal – it was really hard to spot him until we we close. Luckily the local guide spotted him for us!

Kept sailing down the river until the local guide called out ‘tiger’. Our skipper headed to the other side of the riverbank at breakneck speed as we all got into good viewing position with our cameras ready! On the riverbank was the most beautiful and huge male Bengal tiger. We were one of the only two boats that had seen him but our local guide got on his phone and within 5 minutes, 11 other boats turned up. The tiger graced us with his presence for over an hour – hugging the coastline, ducking in and out of the mangroves. After about 45 minutes of the boats playing merry-go-round with each other so that we all got a chance to see the tiger, he sat down and watched us. Got some incredible photos, video footage and enjoyed time just watching him watch us! When he was clearly bored by all the paparazzi taking his photo, he was gone with a swish of his tail.

None of us could quite believe it and the local guide said he had never seen a tiger in such a clear position for such an extended period of time – we were incredibly lucky… And we all felt it!! Spent time examining each other’s photos and swapping email address so that we could share our pictures. Jayne became a local heroine by downloading the guides video footage onto everyone’s device for them which was replayed over and over again! Headed to the next watchtower whilst having, a now cold, lunch – it was about to be severed when the tiger was sighted so it sat getting cold for over an hour – not that any of us minded! I continued to keep my eyes out for wildlife but even wild deer weren’t very impressive after what we had just witnessed. At the second watchtower, we saw that they had stripped parts of the mangrove forest so they could have a better chance of spotting a tiger. A list of sighting was written at the entrance – the last one spotted was back in October and no tiger sighting had been longer than 10 minutes. Got back onto the boat and since everyone else had only chosen to stay for one night, they got on a boat back to the minibus whilst we stayed on our boat back to the Eco village. Got back and showed the videos to the locals – they were incredibly impressed! Settled down to the peace and quiet until the next tour group turned up – a massive group of 20 Indians. We left them to listen to the same folk music as last night whilst we sat on the terrace, writing blogs and sorting out our volunteering work for the next day. Literally crawled into bed without having any dinner, totally exhausted from the excitement today and the last few days of travelling finally catching up on us!