Another lie-in this morning as we were told to head to the main seating area for a 9am breakfast. Got chatting to an American guy who, having seen us volunteer yesterday, decided to remain behind himself to help out at the village. He seemed slightly worries as we were still spotted with blue paint but equally excited by the prospect of spending Christmas Eve and Day with people rather than being alone. Breakfast was aloo curry with almost sweet puffed chapatti – I could have eaten it all day! Grabbed our stuff, said an emotional goodbye to our puppies and boarded the boat back to the main island.

Took over 2 hours to sail back to our departure point and we had the boat we painted yesterday sailing in the river next to us as they had finally got it working! The boat ride was peaceful and we were both feeling a bit apprehensive about leaving the tranquility of the jungle and returning to the madness of the city. Had to wait for the mini bus to arrive bringing the tourists to the jungle before we could board and return to the city. As there were so many of us, we had a mini bus and a car. Unfortunately, we got stuck with a very loud and obnoxious family on the mini bus who thought it was perfectly okay to talk about us in Hindi – it was pretty obvious what they were doing when they said something, looked in our direction and laughed. They even asked if I spoke Hindi at the toilet stop, to which I replied ‘a little!’ – that shut them up a bit! Coupled with the fact that my chair was broken in the reclined position and the driver was clearly a fan of the wacky races, I wasn’t in the best mood when we arrived in Kolkata. Picked up our bags from the shop and started walking to our hotel. Decided we both needed a shower before heading back out to grab a few last-minute Christmas presents (although after seeing the tiger, there was nothing we really wanted!!). Had a Thai meal for dinner and I finally got a much needed and appreciated glass of red wine. 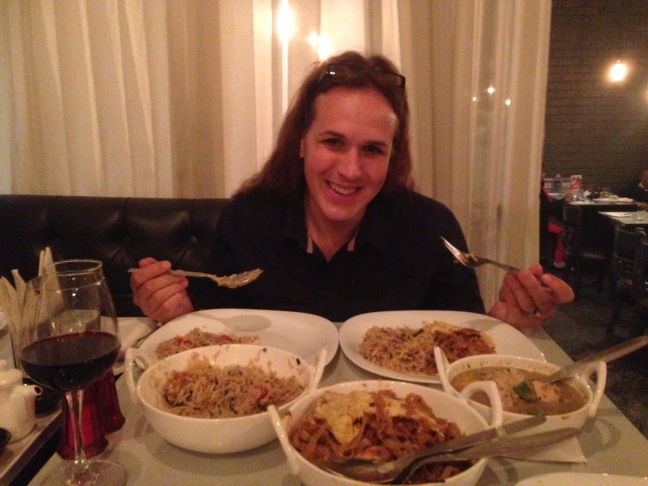 Tried to go to midnight mass at the cathedral but the security guard had told me the wrong information the other day – apparently the 11pm service was for members only and the 12.30am service was for guests but no one could tell us if it was in Hindi or English. Decided that neither of us had the energy to stand in the cold for over 2 hours on the off chance that we might get into church to listen to a service that we might not understand so we decided to go back to the hotel – as Jayne says ‘it’s the thought that counts’. Back at the hotel, we climbed into bed, drank Limca and ate Dairy Milk chocolate whilst watching ‘The Muppets Christmas Carol’ – although I fell asleep after the ghost of Christmas past, leaving Jayne to enjoy our Christmas tradition on her own… Oops!!