We were up at 6am to finish packing up our stuff, get ready, finish off the Indian Christmas cake for breakfast and head out to find a taxi to take us to the airport. Jayne found one almost immediately that was willing to us the meter instead of taking a pre agreed amount. Think he may have driven the long way to the airport but £2.80 for 22kms didn’t seem like something to complain about! He also drive really well for an Indian taxi driver and he spent most of the journey pointing out different sights that he thought we might have found interesting (they weren’t!!!). Got to the airport and, after a slight faff over having to show our passports and flight confirmation before they even let us into the building, we got our bags x-rayed, sealed and checked in. Headed to the departure lounge where I indulged my week long craving for hot chocolate!

The cafe also served LGBT sandwiches… Whatever they were but in a country where all that is prohibited or frowned upon, it certainly did make Jayne and I chuckle!! Tried to look for some speakers to use with the netbook but the choice of airside shops was a bit disappointing. Had a browse in the bookshop and became strangely nostalgic for the children’s adventure books where you got to decide what happened based on what page you turned to after each cliffhanger!! Boarded the plane and settled in for our 3 hour flight to Goa. Used the time to catch up on some of my blog writing(!), sleep and reading while Jayne played Angry Birds and read. 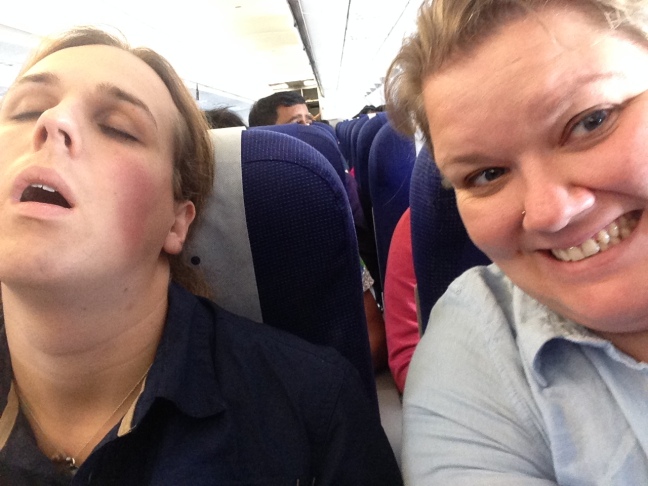 Had preordered food on the plane and got two different sandwiches. One was a cucumber, tomato, cheese and lettuce sandwich which felt a little bit British afternoon tea! The other one was a spinach, sweet corn and cheese sandwich which looked a little bit like eating a massive bogey on bread! A non eventful flight and landing later we were in Goa!! Had a vague plan but wanted to see if it was possible so went straight to the tourist information desk. Apparently, one can get an overnight bus to Hampi and, after getting some instructions, we left the airport in search of a bus stop. Stood on the wrong side of the road for 10minutes before we realised we needed to cross back over to be next to the airport. Got a bus to the right place quickly after that!! A quick change of bus in the next town and we were powering off towards Goa’s main bus depot. Tried to buy our bus tickets to Hampi but all the ticket desks were closed so we needed to place bets on which bus stand would most likely have space for us. Decided to try the private bus stand across the road from the government bus stand as they had one guaranteed ticket available – we just had to wait to see if there was a cancellation… About 20 minutes before the government bus was due to leave, Jayne ran across the road to see if there was space for us. The conductor was willing to let us share a single person bed even though we would still need to pay for two people.

Decided that we would be better off on a bus rather than potentially stranded at the bus stand so we went for it. When we got back to the government bus, he then gave us two beds – our lucky day!!! A quick toilet run where I had to argue with the attendant that it was never 10 INR to use the toilet and had to demand the change (and then the correct change!) only to find out another tourist on the bus had the same issue – bloody cheeky bastard! Settled into our bunks for the long journey ahead.