Both feeling much better after our refreshing afternoon of watching Harry Potter and sleeping, we decided to try attempt two of visiting the Brihadishwara temple in Thanjavur. Left the hotel around 7am and caught a bus that actually had space although the bus driver kept looking over at us and saying ‘sexy’, so I guess you can’t have everything!!! The 41km journey took just under an hour and a half, which is practically a miracle by Indian standards (notice, my love of buses has decreased slightly since we began travelling!!). We jumped out at the bus stand and walked the rest of the way to the ‘big temple’ using the walk as an excuse to stretch our legs. The temple, built between 1003-1010, is considered the crowning glory of Chola architecture, sculpture, painting and bronze carvings. You walk through two ‘gates’ before entering into the temple complex, each one built to celebrate a Royal victory. There is a covered statue in front of the temple of Nandi (Shiva’s sacred bull). Carved from a single piece of rock, it is the largest statue in India of Nandi, weighing 25 tonnes, measuring 6m long and 3m high. Another long hallway leading to the main temple, filled with less carousel horses but more bat guano. The temple itself was similar to yesterday’s although today’s priest was willing to let us violate the no photo rule for a small ‘donation’. Suffice to say, we left without taking any photos! The outside of the 66m vimana (tower) in this temple is straight and severe when compared to its ‘sister’ temple that we saw yesterday – you can clearly see the difference in design.

Along the temple walls, the king who commissioned the temple had inscribed the names and addresses of all of his several hundred presents, 400 dancers, 57 musicians, barbers and poets into the stone. After the temple, we walked back towards the bus stand and decided to get out of the midday sun by using an Internet cafe to sort out our plans for the next few days. Also had lunch in a nearby ‘hotel’ where our food was served on banana leaves directly onto the table.

Think the waiters were fascinated by us eating with our fingers and not making an awful mess, although one did keep coming over to give us ‘tips’ and to pore sauce over my rice to make it easier. Got back on a bus and got off at the town before Kumbakonam to visit the third and last Great Living Chola Temple. The Airavatesvara Temple of Darasuram was built by Rajaraja II between 1146-1163 and was, by far, our favourite Chola temple.

Less grand than the other two, with its 24m vimana, it was overflowing with mini sculptures, columns, paintings, stone chariots, elephants, horses and a stone image of Shiva on the rare incarnation of Kankalamurti, the mendicant.

Having avoided the priest who, when I said I didn’t require a blessing, blew out his candle and huffed away to look for more visitors and the shoe boy who wanted money cause he didn’t touch our shoes, we left the temple and walked the 3km back to our hotel. As it is Pongal tomorrow (the Tamil Nadu region Indian version of harvest festival), we got to see all the beautiful and intricate kholams that were being created to decorate the outside of most homes we walked past.

As we continued our walk, a group of guys slowed down on their scooter and practically drooled as they said to Jayne ‘niiiiiiicccccce quality’ – I couldn’t contain myself and the three of them drove off looking slightly wounded to the sounds of my laughter. I then, being lovely, teased Jayne about it the rest of the way home! Decided to visit a couple of the colourful temples in the town before heading to dinner. 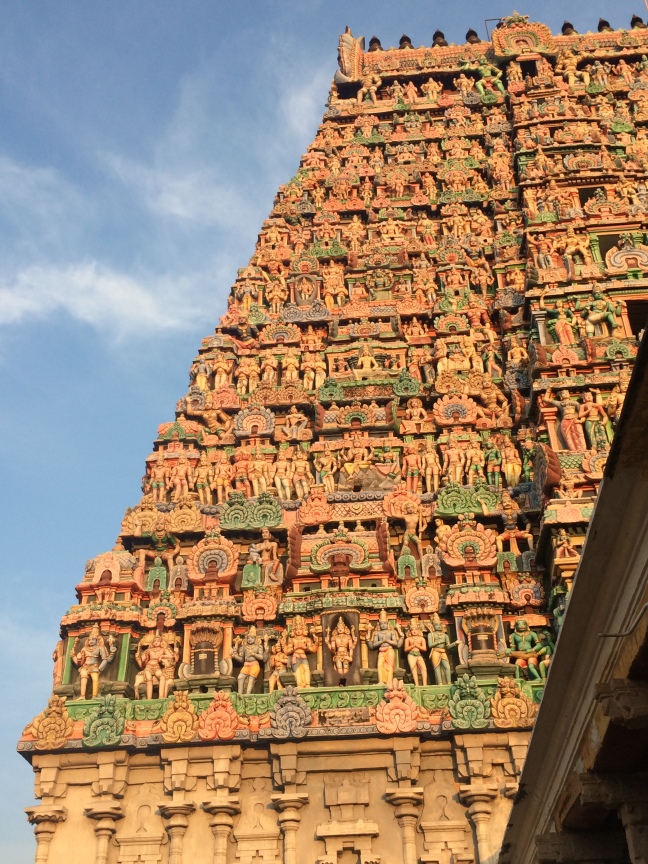 There are 18 temples in Kumbakonam, mostly dedicated to Shiva or Vishnu but we only visited two – the Sarangapani Temple which is the largest chariot-based Vishnu temple (at 50m high) and the Kumbeshwara Temple which is the largest Shiva temple, claiming to contain a lingam made by Shiva when he mixed the nectar of immortality with sand. Headed back to Dosa Plaza for dinner before returning to the hotel, packing and falling into bed.