Woke up around the same time as yesterday and headed up to the terrace for breakfast. Had another traditional Sri Lankan breakfast of string hoppers, potato curry and coconut sambol. Feeling really spoilt by the local food especially as it is so different from our previous Indian breakfasts – just as tasty, not as spicy but very different – could eat it all day!

Fortunately (mainly for my waistline!) we finished what we’d been given and headed back to our room to pack up our stuff. Asked Shauna if she wanted to join us in our walk to the bus station as she was getting the train to Ella. She agreed but clearly struggled with her 12kg bag… She kept asking us if we were nearly there! Felt really bad that we were ‘forcing’ her to walk but she kept saying she wanted to stick with us. Got her down to the train station and she was delighted. Turned out she had never walked more than a few hundred meters with her bag so the 3km was definitely something she was proud of! Felt incredibly guilty that we might have broken a second tourist during our stay in Sri Lanka, said our goodbyes and headed off in opposite directions. We had only got about 100m further down the road when a mini-bus pulled up next to us and said ‘Dambulla?’. Now, we had honestly planned on getting the local bus for 100LKR each but at that moment in time, the luxury air conditioned bus literally called out to us!!! So, for 330LKR each, we travelled in space, cool air and luxury the two hours to Dambulla. I spent some time catching up on blogs whilst Jayne tried not to be sick – something at breakfast hadn’t quite agreed with her so we were definitely glad we had the AC bus!! Jumped off the bus with some other tourists about 2km outside of town to visit our second Sri Lankan UNESCO World Heritage Site – the Golden Temple and Dambulla Cave Temples. Sitting atop 160m above the road are five separate caves which contain approximately 150 Buddha statues and paintings. We left our bags at the (un)official luggage store in the gift shop – have a feeling that the lady kept the 200LKR herself but she looked after our bags so we didn’t mind!! We started off at the ‘World’s Largest Buddha’ statue in the Dhamma Chakka Posture which is located at the bottom of the Cave Temples. A slightly kitsch looking 30m high Buddha that was built using donations from Japan, it was revealed in 2001 and currently undergoing renovations.

It was fascinating to watch the men work on three different levels. The bottom level were sanding off the old paint, the next level were applying a white base colour whilst the third level were repainting it gold. Clearly in the Sri Lankan heat, you don’t need to wait 6 to 12 hours between each coat of paint like you do in the UK!! Started walking up the endless amount of steps towards the caves which had superb views over the surrounding countryside – we even caught glimpses of the Lion Rock in Sigiriya (which we have the ‘joy’ of climbing tomorrow!!). 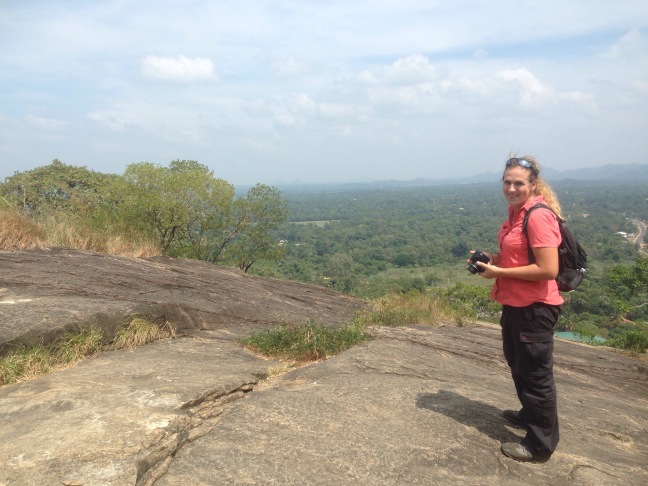 Thought to be the place where King Valagamba took refuge after being driven out of Anuradhapura in the 1st century BC. When he regained his throne, he had the interior of the cave carved into the Rock temples to become a place of worship. Subsequent kings, including King Nissanka , who had the caves interiors gilded, which earned it the name Ran Giri (Golden Rock). Having left our shoes with the shoe storage man, we literally had to hop, jump and skip our way across the burning hot floor stones. Made our way to the first cave which has a 15m long reclining Buddha. The second cave was 52m wide, 23m deep and 7m tall at its highest point. It was full of Buddha statues in different positions.

There was also a vessel (safely hidden behind a metal grill) that collects water that constantly drips from the ceiling of the temple – even during droughts – which is then used during sacred rituals. The third cave was equally as impressive as the second cave, housing a reclining Buddha as well as other Buddha statues in the cave that used to be used as the Kings storeroom! The forth cave was quite small in comparison to the others and contains a sculpture of Buddha surrounded by Sri Lankan Dragons. The dagoba in here is broken as thieves thought it contained jewellery from the queen and broke into it. The final cave also housed a reclining Buddha. 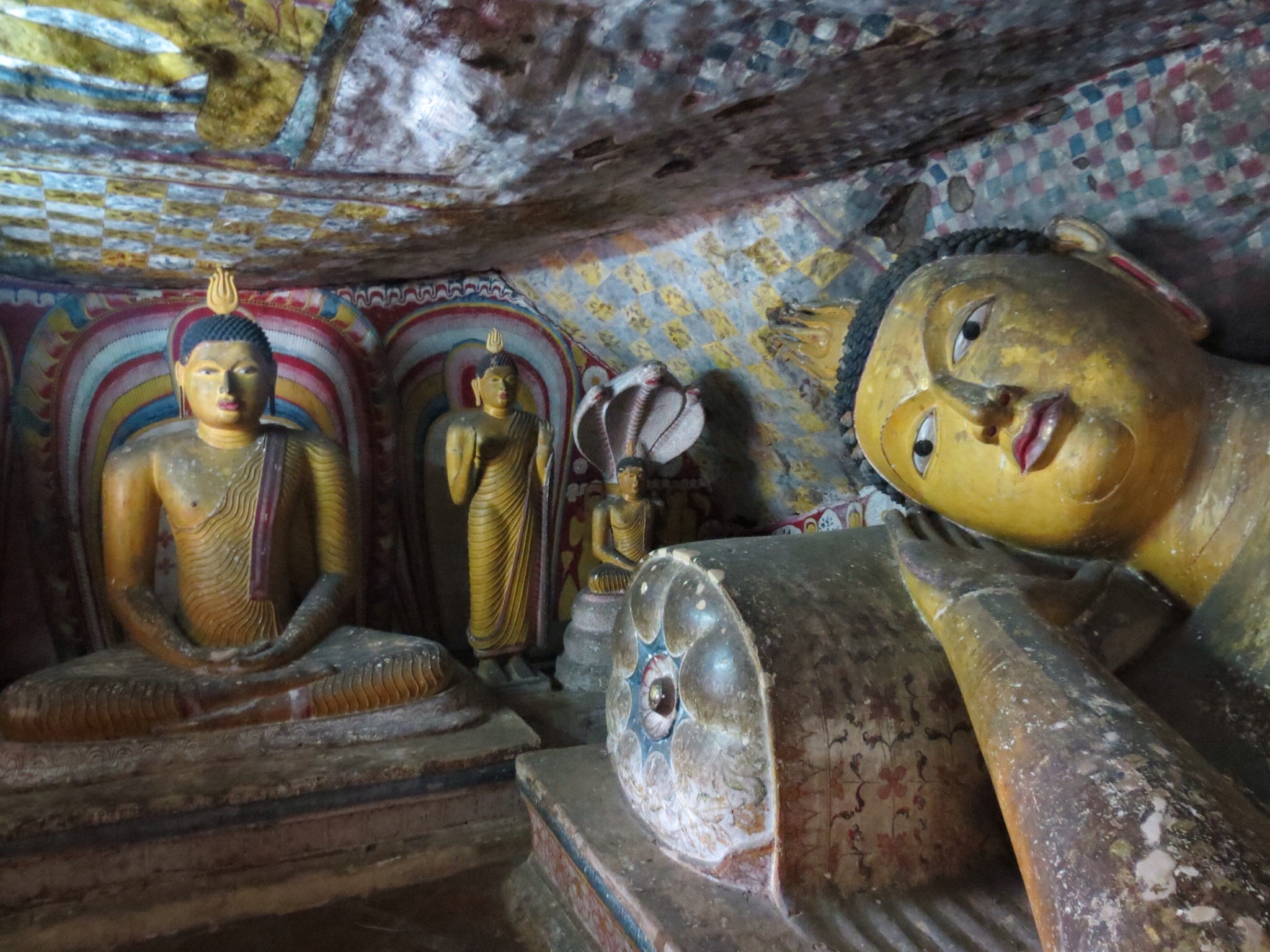 Visited the caves again in reverse (not only to avoid the baking hot sun but also the roasting floor stones!), picked up our shoes and headed back down the rock. Grabbed our bags and, after waiting for 20 minutes with no luck at the nearby bus stop, walked the 2km to the bus stand in town to catch a bus to Sigirya. Found one easily once at the station although three helpful police officers were determined to point us in the right direction. Managed to explain to the conductor that we wanted to get off before the town and, with a bit of visual support from ‘maps.me’, we got off at the right stop and only had to walk 300m to our guesthouse. Found it easily, checked in and ‘enjoyed’ a rather salty watermelon juice welcome drink – despite its taste, it probably did us the world of good replacing all our lost salts from sweating! 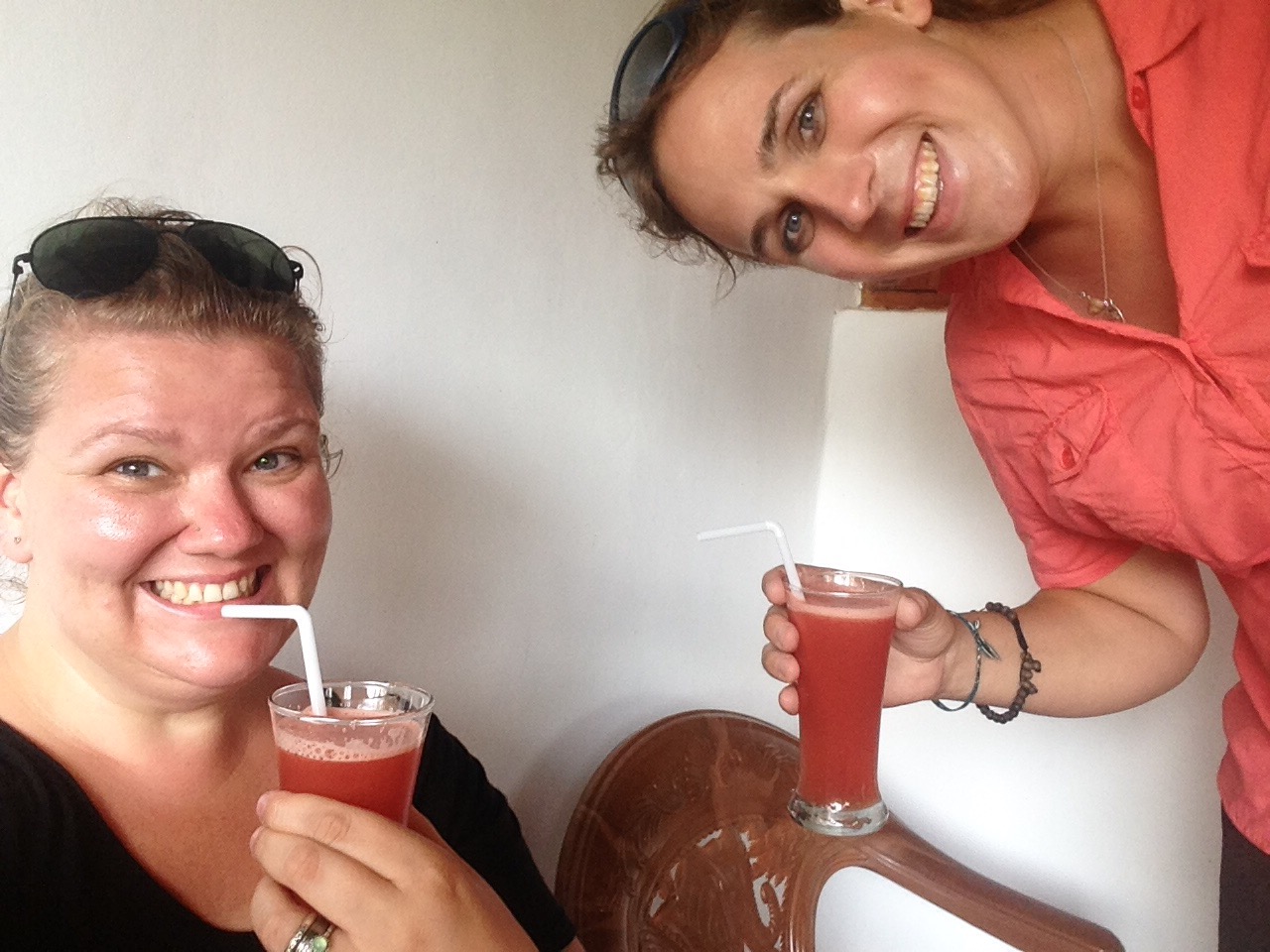 Sat on our little terrace, enjoying the quiet sounds of the jungle and reading books. Had dinner at the guesthouse – it was amazing! Five types of Sri Lankan curry, devilled chicken, poppadoms, cucumber salad, vegetable soup and pudding for less than £10 – we were stuffed!

Luckily, it was only a short stumble back to our room to sleep off our food babies!!