“Rising from the central plains, the iconic rocky outcrop of Sigiriya is perhaps Sri Lanka’s single most dramatic sight. Near- vertical walls soar to a flat-topped summit that contains the ruins of an ancient civilisation, thought to be once the epicentre of the short-lived kingdom of Kassapa, and there are spellbinding vistas across mist-wrapped forests in the early morning.”
If the opening paragraph of the guide book doesn’t draw your attention to this behemoth of a rock, then fellow travellers and tourists to the beautiful island of Sri Lanka will all tell you that Lion’s Rock is a must on the itinerary.
We set off early from the guest house and we’re going through the ticket turnstiles at 07:30. We caught glimpses of Lion’s Rock through the trees on our walk, but we had chosen an out of the way lodge so as to be more quiet and the remoteness only heightened the anticipation as every so often it would appear before us, larger and nearer. It was only in the gardens with the wide terraces and moats that we were able to crane our necks up at the rock itself and gasp at the sheer size of it. 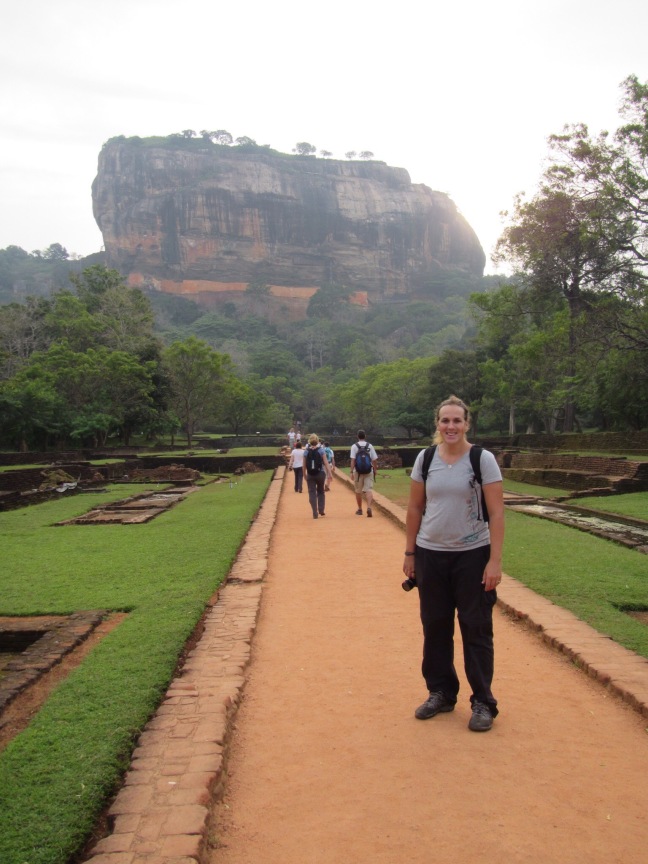 We wasted very little time (maybe a few sneaky photos of a baby Giant Squirrel begging for food) in getting to the top. We were up on the summit by 08:10 and it was worth it. The overhang on the west side of the rock is adorned with frescoes in beautiful colours of reds, yellows and greens but the spiral staircase up and down to them really put your nerves to the test. With the staircase being attached outwards from the rock there was quite a view (and drop) should you fall or get lightheaded from vertigo. They were however caged so precautions were at least in place.

In this niche is a series of paintings of buxom, wasp-waisted women, popularly believed to represent either apsaras (celestial nymphs) or King Kassapa’s concubines.
Protected from the sun in the sheltered gallery, the paintings remain in remarkably good condition, their colours still glowing. They are supposed to be at their best in the late-afternoon light, but we weren’t planning on making a second trip up to see them.
Modern theory suggests the female forms represent aspects of Tara – a bodhisattva and one of the most important figures in Tantric Buddhism. They are similar in style to the rock paintings at Ajanta in India, but have a specific character in their classical realist style. No one knows the exact dates of the impressive frescoes, though it’s unlikely they date as far back as the 5th century (when King Kassapa reigned). Personally, I can’t remember any such voluptuous paintings in Ajanta, but maybe they have been rubbed away from people drooling and pawing over them???

The halfway stage was the Lions Paws on the north side of the rock. It was a worrying sight to see a first aid tent erect and manned so early in the morning, but again it was nice to see that some thought was being put in for tourists, especially those that were about to have a heart attack (i.e. Me) from the climb. These paws are pretty cool; being at one time a gigantic brick lion sat at this end of the rock, and the final ascent to the top commenced with a stairway that led between the lion’s paws and into its mouth. The lion symbolism serves as a reminder to devotees ascending the rock that Buddha was Sakya- Simha (Lion of the Sakya Clan) and that the truths he spoke of were as powerful as the sound of a lion’s roar.

The final stretch of stairs traced their way along the edge of the north face. It is a cruel irony that they put the treacherous final leg on the north face whereby the metal steps creaked and every third or fourth metal pole seemed to be missing its place in the rock face or just eroded away completely. Funny how we both had thoughts of what to do should the narrow staircase decided to go on our ascent – I would have jumped as best I could towards the trees and hoped for the best.

The views as you can imagine are spectacular. For miles in every direction there are forests and lakes and in the distant the beginnings of a mountain range. There was nothing particularly that stood out, but everything was beautiful. We dreamed of seeing elephants marching unseen though the dense jungle and listened to the screech of falcons as they circled higher and higher from the heat buffeting off the rock to then soar off in to the distance. Our quench to soak in all the view was surpassed by the thirst that built up on the summit and we said we’d properly explore the ruins of this ancient city.
The established historical theory is that the rock formation served royal and military functions during the reign of King Kassapa (AD 477–495), who built a garden and palace on the summit. According to this theory, King Kassapa sought out an unassailable new residence after overthrowing and murdering his own father, King Dhatusena of Anuradhapura. However, in recent years some archaeologists have challenged this viewpoint and believe Sigiriya was not a fortress-palace but a monastery and religious site.
After the 14th century the complex was abandoned. British archaeologist HCP Bell rediscovered the ruins in 1898, which were further excavated by British explorer John Still in 1907.
They were busy restoring walls to a part of the complex and we decided to help carry some of the sand bags for the workers as it was on our way up and across to the swimming pool. It was hilarious watching them having to up their game and they started carrying three and four bags each as we had done two. Seemed silly as we only did a short stint and got to stroll around the worlds most pointless swimming pool, they had to do it in the baking heat all day. 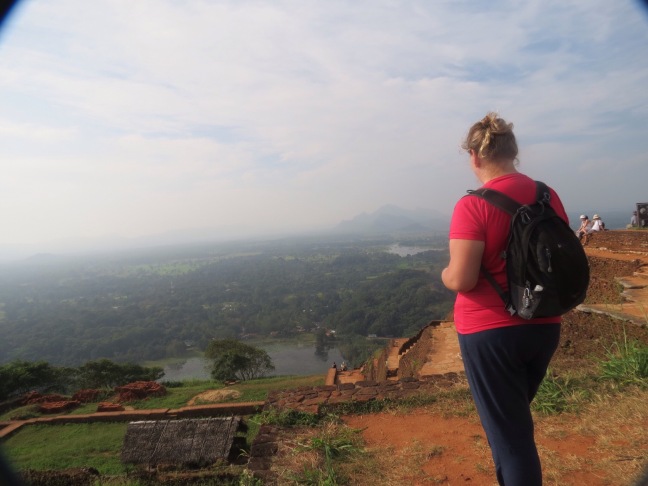 The descent was thankfully quicker and easier, using a different route (smart people these Sri Lankans). The area below is peppered with natural cave shelters and rock overhangs – supplemented over the centuries by numerous hand-hewn additions and modifications – Sigiriya may have been inhabited in prehistoric times. The surrounding landscape, lily-pad-covered moats, water gardens and quiet shrines all add to the sense of a grand city and hint at the marvel that it once was.

After the museum, which isn’t all it’s cracked up to be, we wanted to scale the hill to the north of lions rock. Trying to improve our fitness and partly for something to do for the rest of the day, it was disappointing when a gentleman came looking for money to use the beginning of the path as it past by a shrine and a reclining Buddha. Needless to say we left crest fallen and headed home. We were going to cheer ourselves up with a cool fizzy drink until the girl wanted to add a ‘cold charge’. Reminiscent of a distant land we didn’t get to do what we wanted and we didn’t get to drink what we wanted because people were looking to scam some tourists. Hmmm…. Such a shame when everyone else can’t seem to do enough for you. Even the ice cream man was honest earlier when he charged us four times more than it should have been – quite rightly said that he was the only one and why not?

Back at the guest house we treated ourselves by flagging down the TukTuk bread van and sat down to catch up on Facebook and planning further ahead.