Woke up early, ready to spend a mammoth day exploring the ruins of the ancient city of Anuradhapura (fifth UNESCO site in Sri Lanka already!!). Skipped breakfast at the hotel, as they wanted to charge us £2.50 each for the privilege, and bought some ‘omelette bread’ from the bakers down the road for 20p instead!

We’re given directions to the rental bike shop which was only 1km down the road… 3km later, we got two bikes and were on our way! As it was the weekend, we wanted to visit the Sri Maha Bodhi first as we knew it was likely to get busy. Grown from a cutting brought to Sri Lanka from Bodhgaya in India (we’ve been there!!), the sacred bodhi tree is said to be the worlds oldest, historically, authenticated tree, having been looked after by devotees for over 2000 years. Thought to have been brought over from India by Princess Sangamitta, the site has several bodhi trees but the holiest and oldest stands on a platform surrounded by railings and guards! It was nice to walk around the site, admiring the different trees whilst the locals made offerings or prayers but even as we left at 8.30am ish, it was already getting hard to move around without bumping into people. We jumped back on our bikes and headed to the Jetavanarama Dagoba which was built in the 3rd century and originally thought to have been 120m high, although today it is about 70m. When it was built it was almost certainly the third-tallest monument in the world, the first two being the Egyptian pyramids.

Apparently, the dome consists of more than 90 million bricks which (supposedly) contains enough bricks to build a wall from London to Edinburgh that is 3 metres high!! We spent some time wondering around the ruins of a monastery that is just behind the dagoba which once housed 3000 monks. We also visited the museum which had a large collection of stone wear, including a monks urinal, as well as jewellery, carvings and pottery. We visited the Ruvanvelisaya Dagoba, which is a 55m high white 2nd century dagoba that is guarded by a herd of elephant statues standing shoulder to shoulder around its perimeter. It was also wrapped in beautifully colourful fabric around the base of the dagoba. As we walked around, a musical precession started, consisting of 5 band members (playing drums), monks and devotees. 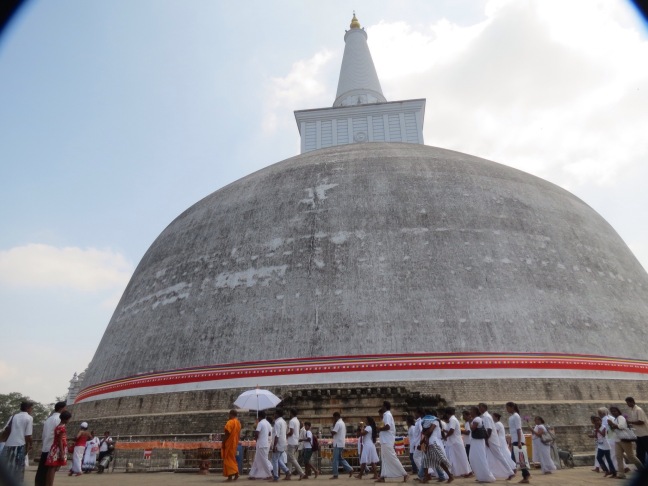 Was beautiful to watch even if our bare feet were slowly cooking on the stone floor. Jumped back on our bikes and visited the Thuparama Dagoba, the oldest dagoba in Sri Lanka (and probably the oldest visible dagoba in the world). Constructed in the 3rd century BC it is believed to contain the right collarbone of the Buddha. We cycled on to the citadel but most of the ruins have almost entirely been reabsorbed by the earth so there wasn’t very much to see. Stopped at a local rest-stop for a much needed bottle of Sprite and, stupidly, didn’t think about where we had parked our bikes… 5 minutes later, we were climbing on to absolutely roasting saddles, trying to cycle standing up until the seats cooled down slightly!!! We spent some time exploring the Abhavagiri Monastery, an absolutely massive area of ruins located in a shady woodland area. Making sure our bikes were parked under trees(!), we headed first to the Abhavagiri Dagoba which was originally over 100m high. It’s name means ‘Hill of Protection’ or ‘Fearless Hill’ and there is supposedly a golden bull containing relics of the Buddha buried within the core of the stupa.

It was here that I burnt the soles of my feet walking on the stone floor – I stopped briefly to read an information sign – of which, I read about 2 lines – before I hopped and ran back to the shade. With slightly sore feet, we visited other ruins in the site. The elephant pond was pretty impressive based on its size which is thought to be an ancient water storage pool for the Abhavagiri monastery, rather than a swimming pool which is what we wanted to use it for, but we did see a terrapin indulging in the deep waters!!! Having walked around the ruins for over two hours, we headed back to our local rest-stop, had another cold drink before cycling out of town to visit the Isurumniya Vihara temple. 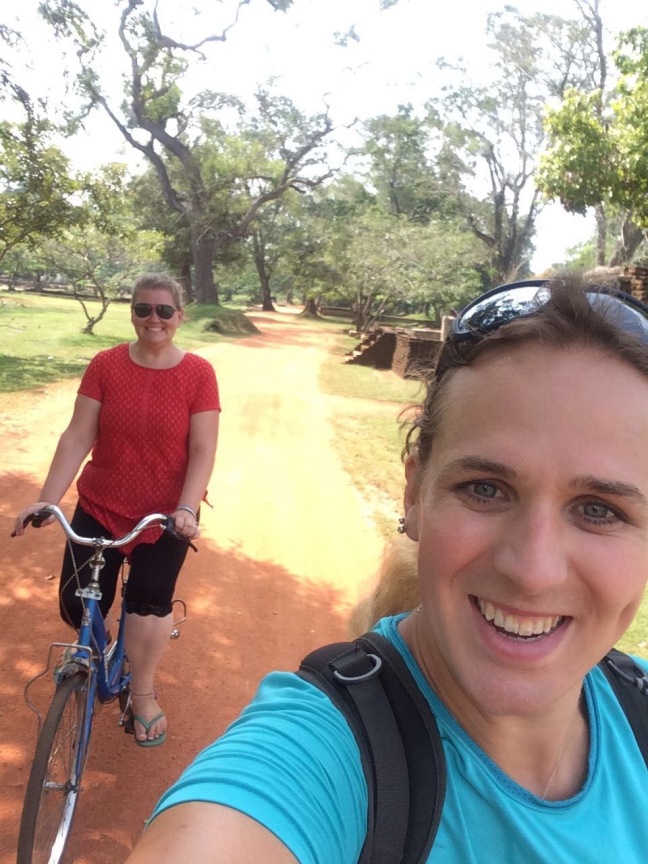 When we got there, there was a big sign asking people to only enter if they were wearing white clothes (a holy colour). Despite protests from the security guards that we could enter, we both decided that we wouldn’t feel comfortable in our colourful attire so left and visited the Vessagiriya instead. We spent some time climbing and exploring the extensive remains of the cave monastery complex, enjoying the nice view of the two largest dagoba’s from the top of a rather high rock. We cycled slowly back into town and dropped our bikes back – it was nice to see that the family were teaching the Down’s Syndrome son how to manage the business, even if he did chase us down the road asking for the key that was in his hand! Went back to the same restaurant as last night for dinner and gorged ourselves on chicken kottu, roasted vegetables and cold drinks after our day of cycling! Headed back to the hotel to catch up on emails, Skype call parents and finish watching ‘The Hobbit’ before collapsing in bed.