NJ joining the seasoned travellers – day 2
Colombo – Galle – Mirissa
After dropping off to sleep almost immediately, I woke a few times due to the air con which the 4th person in our room had whacked up high. Clearly not cold enough to actually get up and turn it down, but was awake enough to hear jayne get up and then I panicked as my alarm hadn’t gone off too (forgetting that I had set it for half an hour later!)
We enjoyed an included breakfast of juice and omelette before waving jayne off on her journey south and had a lazy hour or so watching American tv (with subtitles) before catching the bus (without backpacks) to the train station. Very easily got tickets to Galle on the south coast and watched as the platform filled with a mixture of locals and tourists. We discussed the fact that all the other tourists were probably very impressed with how light we were travelling (a day sac and my handbag!) and I told Katherine of an article I had read in a magazine about a lady who had travelled for 3 weeks with only one dress and 3 pairs of knickers – we both agreed that we couldn’t do that – she didn’t even have a book!
The best train journey in Sri Lanka didn’t really live up to its hype (although I don’t know what any other journey is like) but the sea views out the window were lovely and watching the city turn to countryside turn to beach villas on our side of the track was an enjoyable way to spend the morning.

Expecting to meet jayne in the fort at a coffee shop, we were surprised to see her waiting at the barrier (apparently seeing us walking up the platform was the highlight of her day!). A walk up the road brought us to the fort – a UNESCO world heritage site.
The site of this fort (built in 1663) is pretty hard to beat with beautiful sea views on 3 sides. As you peer down into the sea from the ramparts the coral and fish are clearly visible as people cool off or snorkel in the water. We walked along the wall leisurely (as it was the hottest (36 degrees) part of the day (mad dogs…) roughly following the lonely planet walking tour. 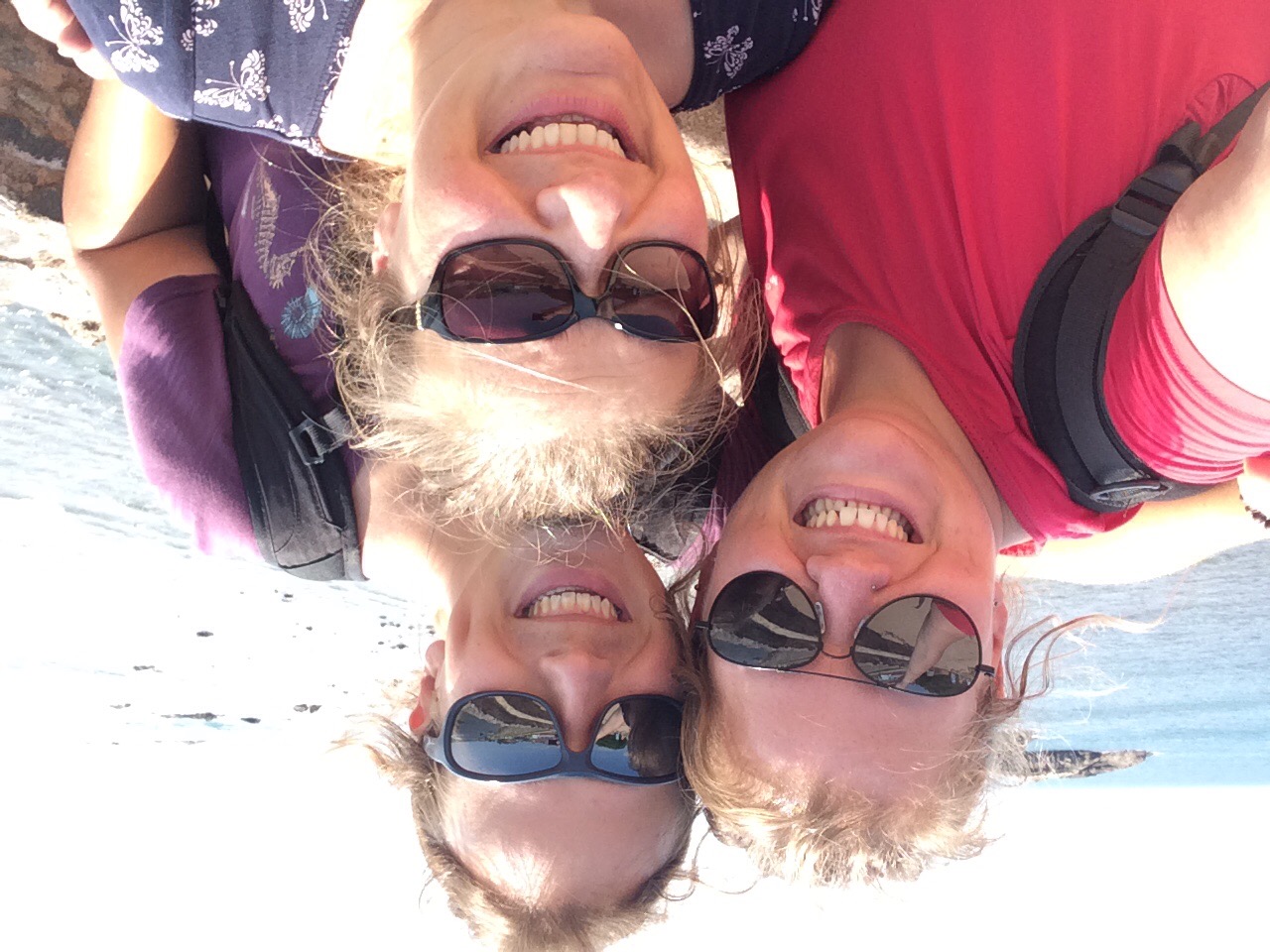 Headed into the centre for an amble around the shops/churches and temples before heading back onto the wall to back where we started (and where a valentine’s concert was taking place down below). I actually enjoyed everything today, but my highlight was managing to eat a Mango ice lolly without getting any down me, despite the fact that it was melting quicker than I could eat it. 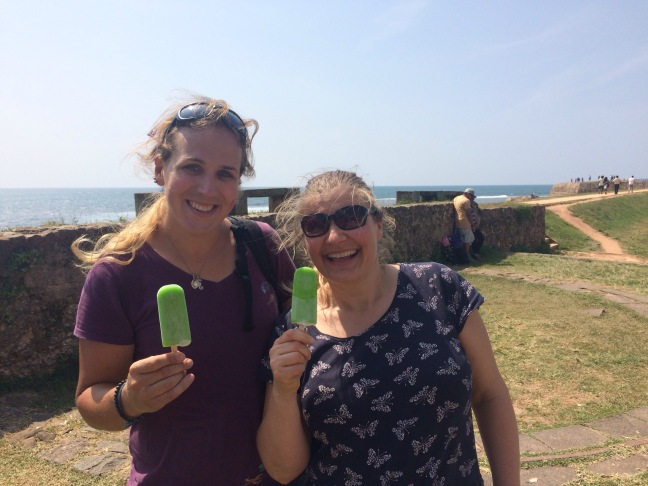 As jayne had driven back up to Galle (rather than getting the bus) we made our way to the car and headed towards Mirissa a little further down the coast ready for our whale watching tour early tomorrow.

On the way we stopped at the turtle hatchery (Katherine’s highlight of the day) – right on the beach they have built a guarded sand area where they bury the eggs they find in labelled and dated sections where they stay until they hatch 65 days later. They release the turtles back onto the beach (apparently they need to waddle down to the ocean themselves otherwise they can’t find their way back 30 years later when they are ready to lay their own eggs) either that day (the green turtles), or after a few days (Olive Ridley) until they are bit more hardy, or 8 months later (the very rare loggerheads) to supposedly give them an even better chance of survival (however, from a large batch there were only about 6 still left in the tank that we saw. – so not sure how much they are increasing their chances by). There were quite a lot more of the tiny Olive Ridleys which were very cute, flapping about making their way to our side of the pool or sleeping with their tiny heads above the water, mouths agape. 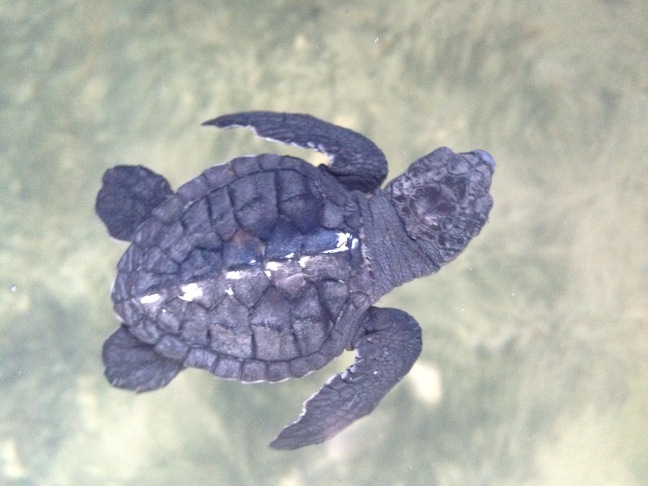 A number of rescued turtles were in the other pools – caught in nets and delivered by the fishermen – most will eventually be released back into the ocean, however, the ones without a fin (cut off by the very sharp nylon nets) can’t dive down so would not survive if put back in the ocean.
Another short drive brought us into Mirissa – a beach lovers Mecca. We headed for the beach and walked in the water (jayne and Katherine) or as far up the sand as physically possible (me) along the beach front deciding which restaurant to choose (apparently my second responsibility.) Most of the restaurants are built onto the sand (apparently illegal and at risk of being pulled down – not that I knew this at the time) and the incoming tide was lapping at the diners/drinkers feet.
Surfers were catching waves to the right even as the sun was disappearing and hopefully stopped before it was pitch black although they could have been aided by the laser beams from each of the restaurants enticing customers in. We enjoyed dinner on the beach before heading to our family run hotel right off the beaten track.

A slight reversing into the driveway calamity, while the owners looked on with increasing worry, but all good in the end.

I must have passed out last night, as Kat and Nic were commenting on how cold they were during the night, while I didn’t even hear the other guest arrive in the early hours. Apprehension started to build about my long drive and breakfast was a blur. I knew I had to get petrol before hitting the expressway and was hoping (and managed) to find some before continuing on the route I thought I needed to go. I passed through several hamlets, street traders setting up for the day and bus all ready at the depots. I was on the southern expressway soon enough travelling through varied landscapes but not appreciating the view with all the concentration.

I did pull over at one point. The car was rattling slightly and a passing car was either pointing to the wheels or describing something obscure between themselves. The only thing I could see of concern was a repaired puncture on the back right wheel, but nothing that would cause a racket. So, on I went and pulled over after paying the exit fee for the toll booth and turned on the wonderful maps.me app to direct me the final 8.5km to the hotel. Sure enough, a silent engine driving through tiny villages meant I needed to start using the horn a bit, I had to swerve for a dopey monitor lizard who was kamikaze and I arrived… nowhere! No sign of the accommodation and some locals said it was straight on, others backwards, until eventually a kind gentleman jumped on the back of a bike and we went on an adventure.
Parked up down back roads while they went knocking at doors and showing others where I suspected the hotel to be on the map. It was only when they were calling it a break did they hand me back my phone and I got to search through photos for a screen shot of the accommodation and the address. They felt like right idiots, so the bike was now zooming down the road and the local in the passenger seat was finally learning that I wasn’t moving till he put on his seat belt. Back to where we originally were the two lads went shouting for guest owners to wake up/ come out and they didn’t seem all best pleased at the interruption. The gentleman and myself were put out that there has never been a sign on their house and the locals didn’t even know it was called ‘Grand Villa’.
Bags dumped, a pointless attempt and exchange of words seeing if they wanted/needed anything in Galle and I was back off, driving down the coast road to meet Katherine and Nicola so I can tick off UNESCO site #6 from Sri Lanka’s list. The sea was beautiful – the ocean waves breaking a frothy white over turquoise – it reminded me of one of those foamy bath bombs that fizzing and turns the water extraordinary colours and a layer of bubbles. Continuing through more villages and hamlets the surf schools lessened and the fish stalls increased. Parking down a side road in Galle, I marched to the train station knowing that I’d be there before them and put some literary creation to my part of the day’s blog. 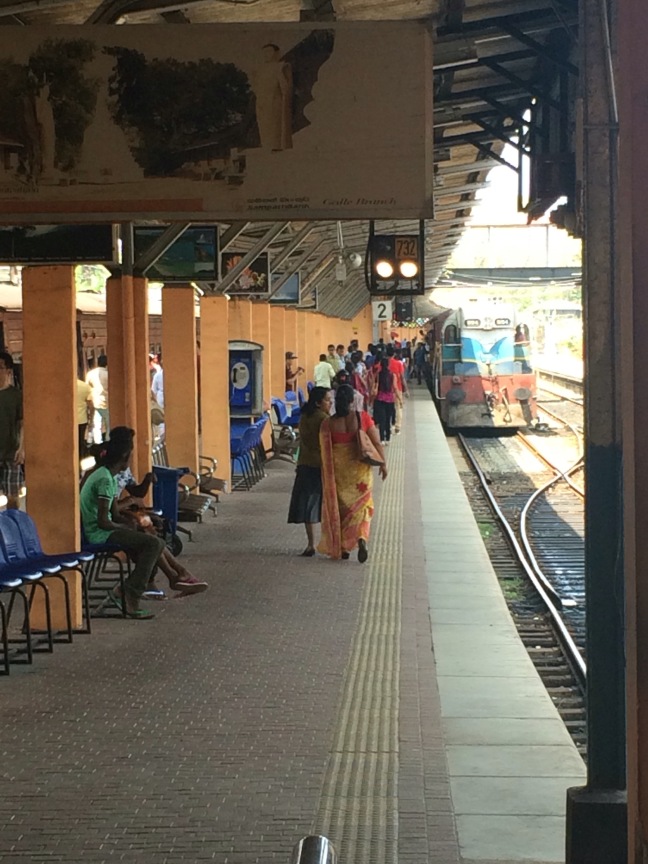