Got up early and were out in the water snorkelling before the sun was up. Made the local women laugh as we joined them in the water fully clothed only to shudder at the chill in the early morning water – probably not cold at all but we’re used to jumping in after sunbathing!

The current was incredibly strong after yesterday’s storm so there were occasions where we were swimming against the current but not actually moving. Turned out to be a great work out as you couldn’t stop swimming, even for a moment, without getting pushed back a couple of feet. The current and cold water(!) was definitely worth it though when we spotted an absolutely massive eagle ray, followed by a couple more sting rays and a school of damsel fish by a solitude coral. 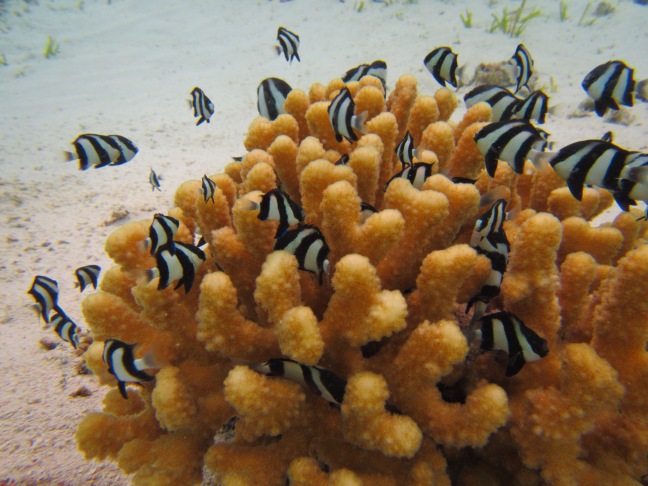 Given that we swam against the current for nearly an hour, we turned around and, without kicking, made it back to shore within 10 minutes!! Saw a enormous fan tailed sting ray just as we were coming up to the channel used by the local ferry and boats. Watched him for a while before heading in for breakfast. Eggs, sausages, toast and jam we’re devoured before we headed back to the beach to vegetate all day. Jayne went back into the water around mid morning for another snorkel – heading nearly to the wave breakers, finding a coral garden, some butterflyfish, pipefish and other tropical fish.

I opted to snooze on the beach under the shade of a parasol – occasionally waking up to peer into the water to make sure I could see Jayne. We spent the rest of the day being lazy, reading books, chatting and eating peanut butter and blueberry jam sandwiches. Headed in to shower a bit earlier today as we both felt a bit tender – clearly you can still get sunburnt when dressed head to toe in long clothing and sat under a parasol!!! Went to watch the sunset, bumping into the Italian family again who showed us their new (and improved) version of hermit crab racing that Jayne and I had taught them and the kids yesterday.

We continued up the beach after the sun sank slowly behind the clouds and horizon to walk along a stretch of beach which is the southern most tip of the island and uninhabited. With the failing light, we were still able to see about a dozen juvenile stingrays and a few baby sharks. We were just about to wade in to the shallows with the torch on the phone when there was a flurry of activity and the sharks clearly just started their feeding frenzy. We headed back over the island to our cosy cafe for a round of tune kotthu roshi, having already enjoyed a jar of olives with the sunset. We waited patiently until the shop reopened for an ice cream to complete our progressive dinner of the island. Back to the hotel room to pack, relax and enjoy a bit of cable tv before the ferry in the morning.