Having woken up much more refreshed than I have in a long time, we took our time getting up, watching ‘Friends’ in bed whilst eating breakfast of toast with chocolate spread and peanut butter & jam. Headed to the opposite end of the island, fully clothed so we wouldn’t offend anyone, and put ‘Barb-ara’ to use again. I sat on the shore line catching up on LOTR, making a head scarf out of my t-shirt whilst Jayne waded out in the water to cast out her line. 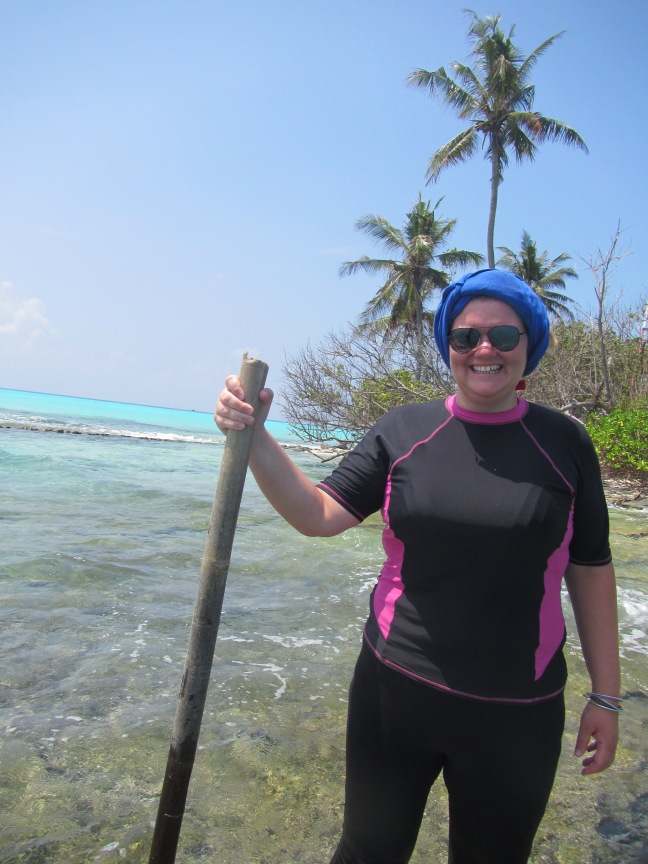 Clearly the fish here aren’t stupid and, despite there being a massive shoal when she cast out, they moved about 10 metres further down the lagoon. The current began to pick up so we headed around the corner to fish there. Found a piece of polystyrene and ‘Barb-ara #2’ was formed. 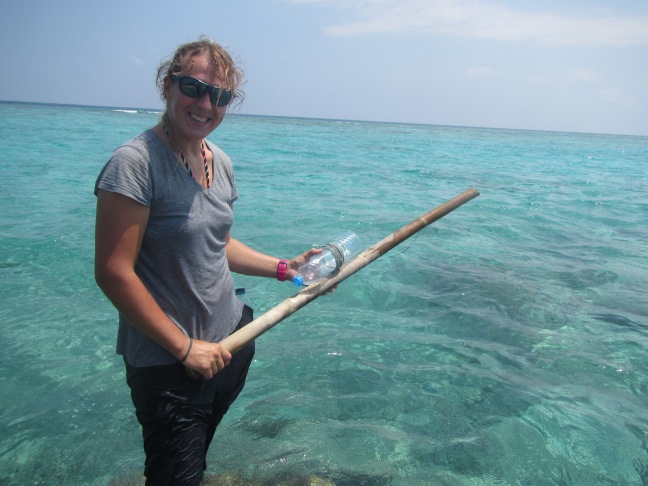 Managed to wedge the bamboo pole into the shipwrecked structured just off the island as we both sat in the shade and read our books. Still being let down by ‘Barb-ara’, I decided to snorkel out and push the fish in her general direction. Managed it really well (clearly I was a sheep dog in a former life) but still no fish caught for our dinner! Gave up trying after that but had had a brilliant morning attempt to catch fish using our recycled rubbish.

Jayne headed back to the flat for a bit whilst I continued reading in the shade, listening to the sound of waves crash against the white sand. Jayne returned with ice-creams (love her!) and we ate them quickly before having a quick dip in the ocean. We both went back to the flat to get out of the intense heat, watching a couple more episodes of ‘Friends’ before going back to bikini beach. I swam around in the water whilst Jayne snorkelled, finding an octopus, cuttlefish and more sting rays.

Watched the sun go down behind some clouds which cast beautiful colours into the sky. Headed back to the flat where Jayne made dinner of rice, vegetables and chicken (a substitute for our bad luck at catching fish!). Had fruit and ice cream for dessert as we watched the third ‘X-Men’ film. Tuesday 8th March 2016