Happy 70th Birthday Dad! Neither of us slept particularly well – think it might have been the late night feast of too much ice cream giving us both weird dreams. Certainly the bed sheets looked liked they had endured a marathon movement session over night!! Spent the morning washing our clothes (using a washing machine… Oh – The simple pleasures in life!!) before heading down to the beach. Decided to give my skin a bit of a break from sunbathing so ninja-upped in a rash vest and suncream again before heading into the water.

We decided to swim out again to the edge of the lagoon to see if we could find sharks or dolphins. The current was pretty non existent on the way out which meant there wasn’t much marine life out in the shallows. A few damsel fish around some of the bigger corals but nothing of real interest (how blasé we have become during our time here!!). Started heading back to shore when the current picked up, both of us slightly worried that we were 1. tired and 2. quite far out from the shore. The current dragged in some huge trigger fish and Jayne found a flat fish hidden in the sand – took me about a minute to see what she was pointing at! Back at the beach, we sat in the shade both reading LOTR. We agreed to read one chapter each before heading back into the lagoon only I was on the ridiculously long chapter 2 of book two – which took over an hour to read! 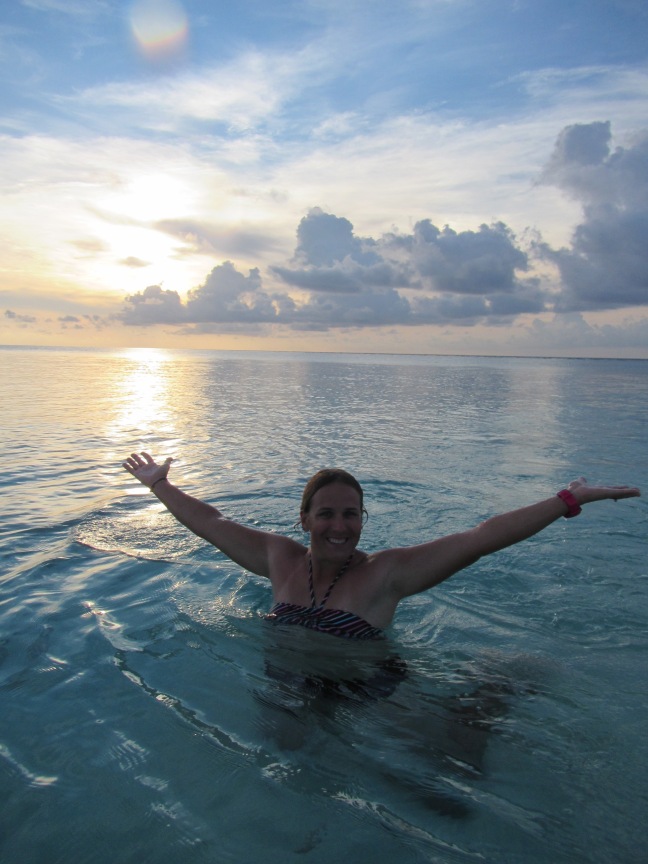 Jayne was back in the water within 20 minutes, heading to the other side of bikini beach to look at the coral garden there. I joined her for a quick swim before we headed back to the flat to escape the heat. I cooked lunch today(!), before calling my dad to wish him a happy birthday and watching a few ‘Friends’ episodes.

Headed back out to the beach around 4pm to carry on reading and snorkelling. Watched our last sunset in Fulidhoo and it was a good one!!

Finally a sunset that wasn’t obscured by clouds – the colours were amazing. Back to the flat for a shower before we treated ourselves to dinner at the local cafe. Played ‘Backpacker’ (to which I lost, badly!!) and stuffed ourselves with Kottu Roshi. Walked along the shore for a while, star gazing and listening to the waves. A quick stop off on the way home to buy an ice cream before chilling out in the air conditioning watching more ‘Friends’.