It was another early start, but certainly not as painful with a good nights sleep and less problems with the boats. We (Mifdad and I) headed over to Rasdhoo Channel and descended down to 30m out in the blue before the sun had even rise. With no unicornfish, batfish or plankton to discern direction and water movement we were out in the deep navy blue waters for about 20mins when we saw shadows…

No, we didn’t stumble across the hammerheads but had been sucked back in towards the atoll island on the far side of the channel and came from the seaside in to a small shoal of tuna. We continued along the reef with a few sharks lazily swimming by, also in need of a bit of coffee and energy.

We had run down both air supplies and deco time but we enjoyed a leisurely dive finding some big groupers, a shoal of pennant fish, an octopus and a blue angelfish. We surfaced and were all alone…

Yep, the sheer depth we had gone to so quickly before the sun had risen meant the boat crew weren’t able to see our bubbles on the surface, breaking up in to a small fizzy solution before silently popping on the surface. Thus, they were hoping and waiting for us on the other side of the channel where the current should have brought us based on how it was going earlier. A distant blur of a hull finally appeared bouncing over wave crests. There was no real panic, I would have swam on to the resort island and become a shipwrecked hobo, lived off coconuts and had a volleyball as a friend.

Breakfast was late, as is now expected/anticipated and allowed for in our schedule. Although, someone got blueberry jam with theirs so she was incredibly happy!

Back at the dive centre Nica gave a briefing for the next two dive sites. Madivaru Corner again for the first dive and Holhi Faru for the second. The first dive was awesome. Rex and I hovered above the other two divers and Nica, not doing any yo-yo diving or hanging on to coral/rock outcrops constantly for a better photo. We saw a grey reef try to attack a sting ray and watched it become stiff and stick out its sting in anticipation of using it. A small white tip came over the bridge of the reef lip to pass a metre away, too close for the camera to focus so quickly but proof is available if needed! We gently drifted in to the channel itself, between Rasdhoo and the Picnic island. 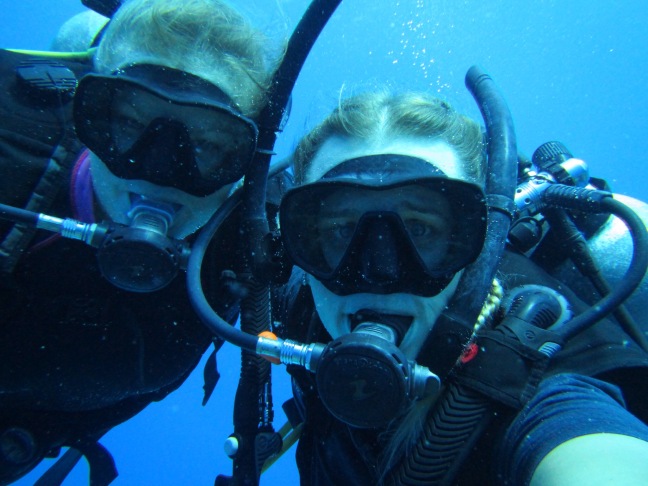 The other two divers had used up so much air in their activities to have to start their safety stop and ascent. We continued on for another 10mins or so, most of which was spent gently kicking against the current to remain in line with a large eagle ray. Being at the back of the group taking photos I was able to start my counter-finning sooner and got in to a fabulous position to be about 2m away when it got curious. Apparently they are inquisitive to anything horizontal and big that aren’t themselves. Thus, my buoyancy skills have finally paid off for a close encounter of the ray kind.

We moored up to wreck for our surface interval, it being the original plan if the current had died down. My computer was a bit cranky for me going in for the third dive – everyone else being only on dive two of the day – so I was punished and had to stay shallow for the duration of the dive.

A rather uninspiring site at the back of the resort island it was incredibly murky and clearly very damaged from all the works they’ve done on the shoreline, projecting the little huts out over the reef. We did manage to spot 2 grey reef shark and a white tip reef shark, all of which were up above us in the shallows (giving further credence to the idea that there’s a lot of rubbish up there, bringing in the parrotfish and cleaning crew). There were also 9 nice sized lobsters (that had never heard of garlic butter in their lives).

A nice relaxed afternoon and we were set for the night dive. The briefing involved a lot of promises to have areas to kneel down on, nothing scary and yet there was still a lot of whimpering and nail biting. It was horrific. The projected fears of others meant the darkness behind the reef, where the torch light couldn’t penetrate, was an ominous abyss of things lurking to come and get you. The fact that the dive site, same as the second morning dive, was on a wall, was a drift and didn’t have any single area to knell upon meant it was an exercise in fear rather than diving. Couple in the fact that the torch battery died and you’ve just pretty much summed up Katherine’s worst fears in a single instance: potential of sharks creeping up, the deep blue being behind and below, now shrouded in darkness casting shadows on the smallest creatures, drifting at a ridiculous speed so as to potentially separate even the most experience of divers, and the torch battery dying leaving you with no reference of up/down, reef/sea.

I called off the dive when Nica passed Katherine a back-up torch. It wasn’t acceptable to have so many things like that happen on the dive and then expect to carry on with a piddly lill’ torch. We were already shallow enough to have already completed a safety stop and let’s face it, it had become increasingly difficult to navigate the dive while holding someone’s hand for parts of it, controlling buoyancy and avoiding the rocks and corals.

A Milo milkshake, tuna toasty, chips, two hours of solid sand beneath her feet and bright lights in the cafe and streets and Katherine was starting to calm down, breathe normally again and let the adrenaline rush come down. I’m very proud of her and think it may be the last night dive ever for Scuba Rex!

I, however, was glutton for punishment. Just before dinner I had returned to the dive centre to settle the bill and thank Dirk for the fab diving. He had a group of 19Danish arrive and were all doing DSD’s the next day. I know all too well the headache involved and returned when it calmed down to offer my help. Graciously accepted, I was now a dive leader for the morning and afternoon dive and had myself a job in the Maldives. A bucket list tick if you don’t mind! 😀 Better get to bed and rest up!