I think it’s cute that Katherine refers to EBC as the ‘side trip’. We have trekked something silly over 100km in about 2 weeks, with highs and lows (including the hills and valleys as well) and now we refer to Everest Base Camp as a ‘side trip’… Ouch!

Being first in Gorak Shep, we were then first to start on the trail, cruising down the dried up lake and getting lost at the first hurdle. With others catching us up and having no ego to be the first at camp, we were happy to always let trekkers and sherpas pass so we could identify the easiest route.

We clearly stormed it – the recommended 3 hours there was obliterated and we would have done it quicker if not for the yak traffic lights (i.e. Wait for them to pass on the narrow ridge above the glacier). The tents grew nearer, the colours seperated into individual tents and we could discern the path down and up the last stretch to the ‘tourist’ prayer flags.

Well, the emotions simmered over and we had to worry about dehydration, not seeing where we were walking, avoiding slippery ice bits and, a new one for us both, worrying about the water freezing on our cheeks. To have finally arrived at EBC when, at times, it seemed impossible and, other times, when people en route doubted us, all the while questioning ourselves, our ability and fitness, to arrive at the mound of prayer flags was simply overwhelming.

When we recovered composure (and dignity), we proceeded to fill SD cards and iPhone memory with photos that will pale in comparison and never do it justice. The individual camps are noticeable by the remote toilets, the large kitchen tents and the concentration of slightly different shapes or colours of tents.

When all the obligatory photos were done, the prayer flags secured somewhere out of the way (but in the wind), we wandered in to the circus and got closer to the ice field, the epicentre of the prayer flags and ceremonies, the action itself and got chatting with an ice fall doctor. Impressed by the sheer size, cacophony, atmosphere and ambience at the place, we found somewhere quiet to nibble a snack before coming back.

Over 2 hours in Everest Base Camp, we were on cloud 9 and breezed back to Gorak Shep for a well deserved cup of hot mango and flick through the photos. Can’t believe already that those photos were because we were actually there…

I seemed to be the more energetic of the two, although neither of us slept particularly well so it was actually welcome when the alarm went off at 05.00 and we could stop pretending. The altitude, the apprehension, the final stage of an epic journey was upon us and it was going to be mega. Bill paid, hot lemon and porridge fuelling the morning hike, the sun shining through a cloud just over the ridge of Nupste and it was cold, bitterly cold. 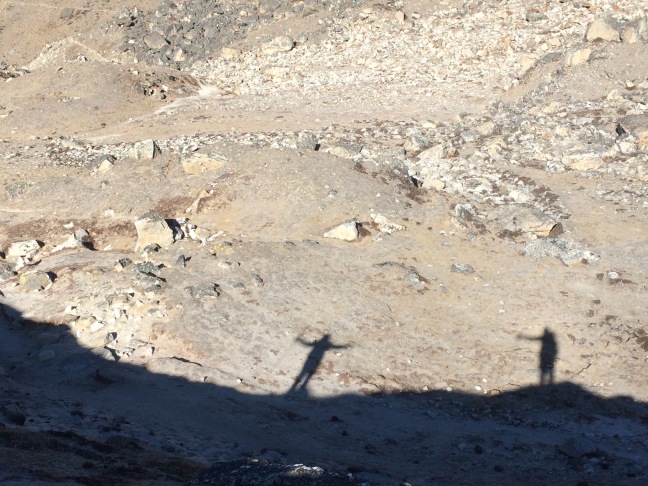 We were, however, storming it, catching up with Yak teams, sherpas and overtaking the tour group that plagued us at Dingboche and Dughla. The final stage is a scramble up and over a hill, boulder field, glacier debris and a slalom of Yaks and loose rocks.

It is always magic to come over a ridge and suddenly the next stop (village) is in sight. Checked in and, after having a second breakfast, we were psyched and ready for the final leg and the emotions were already starting to simmer…