Avoided going to the toilet during the night due to the rumoured yeti who roams the village – so both of us got up at first light to use the outside toilet! Managed to snooze for a little while longer in our toasty, 2-blanket beds before getting up for breakfast. The hike today was actually quite pleasant – the valley looked almost like a deserted quarry which had a river running through it. The path had a steep staircase at one point which, with some wobbly bits, was a joy to get over and done with. As we turned off just before the start of the glacier, we came across the first of the sacred lakes of Gokyo. Crystal clear water that almost looked emerald green from the shore. As we continued along the trail, we came to the second sacred lake and the sheer size of it took our breath away.

However, it paled in comparison to the third lake which is where the town of Gokyo is located.

Found the lodge that was recommended to us weeks ago by another trekker (down near Puiya) and had Sherpa stew for lunch. Chilled out in the lodge for the afternoon, reading books and drinking hot drinks. Got approached by one of the British volunteer doctors who is part of a team trying to raise money to medi-evac a local man with a life threatening infection to Lukla. We gave $40 (which felt like not enough, but was our emergency money) and then spent the rest of the day listening out for the helicopter. Jayne read the story of ‘Yak and Nak go on a trek’ to Ongmo (the lodge owners granddaughter) as we all warmed ourselves by the fire. 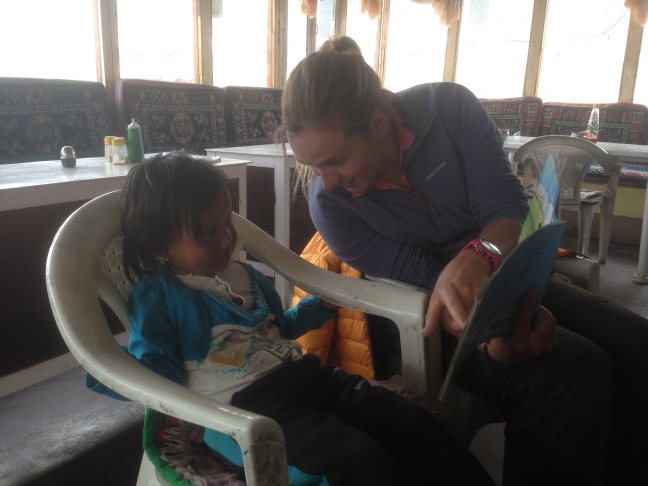 After dinner, there was a thunder and lightening storm with enough snow to cover the roof of the lodge next to us, leaving Jayne to believe (in the semi darkness) that the lake had frozen over!! Snuggled into our beds after getting extra covers although it still doesn’t quite take the chill out of your bones!!