An early start to catch our bus to Lumbini. Left the hotel at 5am and walked to the bus station. Was really nice walking through the, usually busy, streets of Kathmandu just as it was waking up for the day. Watched a large group of ladies do an aerobics class in the grounds of one of the temples. Arrived at the bus station and then were surrounded by guys who wanted to help us! Except none of them had an idea about where we needed to go so we headed to the ticket counter and told to look for bus 9777… Easy enough, except all the license plates are written in Nepali numerals. Started looking for number plates where the last three digits looked the same and found our bus relatively quickly!! One of the benefits of getting up this early was to catch the air conditioned bus to Lumbini – it was bliss, especially after the horror of the bus journey the other day!!! As we left Kathmandu, there were huge traffic jams going up and down the hills. Mainly trucks, lorries and buses that clearly lost speed and momentum to go uphill when trying to pass each other on the narrow roads. I spent most of the bus journey typing up blogs (which was tough given the bumpy nature of the roads) as Jayne watched the film that was being shown on the bus – a Hindi one that kept restarting every time we hit a big pot hole so she never saw the end!

Stopped for lunch after about five hours in a restaurant that has clearly never seen a tourist – they were all really shocked to see us eating the food (which was actually really nice!). For the rest of the bus journey, we watched ‘Friends’ on the iPad. We arrived in Lumbini around 15.00 and left our bags at the hotel/guesthouse to have a little wander around and to stretch our legs. Went through the village and ended up at a local market. The chicken stall was great – a man chopping up a dead chicken for the waiting customers, a massive pile of chicken feathers just behind him and a group of live chickens (not caged) just sitting under the table waiting patiently for their turn to be slaughtered. 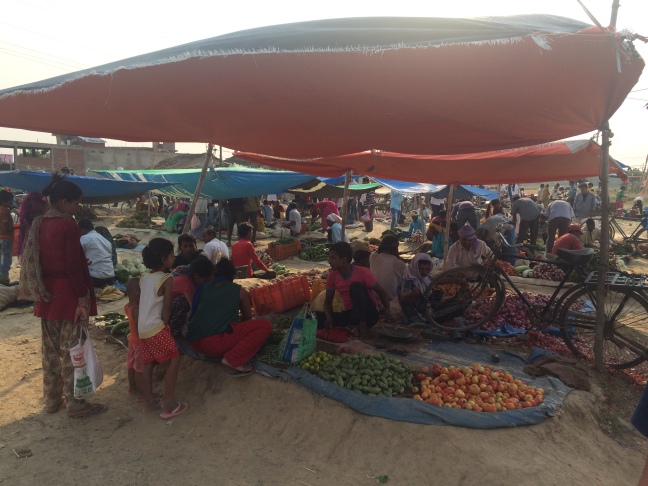 We then walked into the temple complex but didn’t go in as we were both too tired to fully appreciate the Maya Devi temple today (and since it’s a UNESCO site, we need to be on top form!!!!). Headed out for an early dinner and then to bed. However, no electricity + heatwave = no fan and two very grumpy Stockdales!!!