An early start to leave for the bus station for 5.30am to start making our way to the second ancient city. A slightly disgruntled hotel manager, who was clearly miffed that we hadn’t booked his over priced city TukTuk tour or used anything from the mini bar, decided to try to charge us 3,000 kyat instead of the previously agreed 2,000. A ‘teacher’ look of disapproval later and we were on our way, although it had put Jayne in a slightly grumpy mood. Bought some yum yum style bread sticks for breakfast before watching the bus men drag and tie down a motorbike on to the top of the mini bus along with our bag and other various types of luggage, including several bags of coconuts. 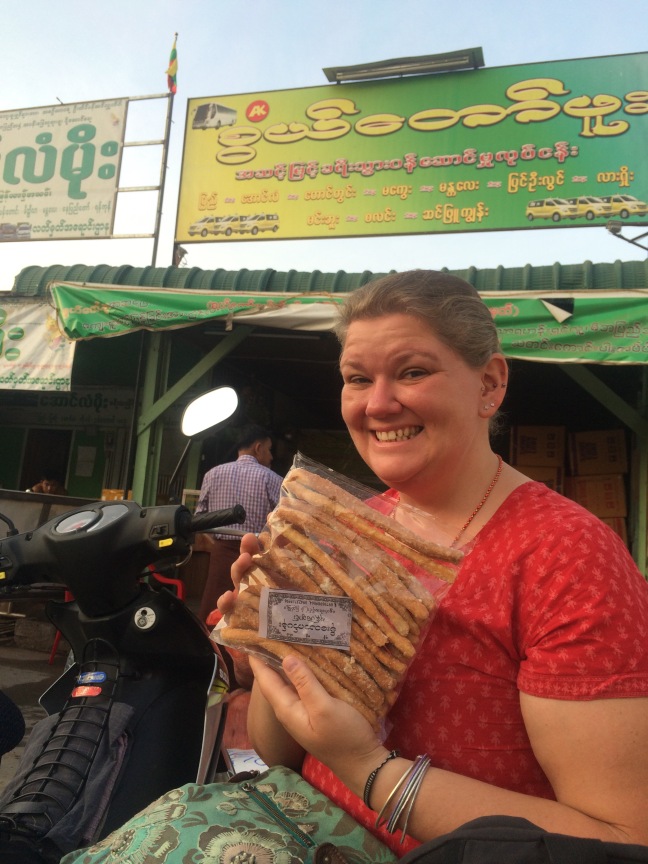 As we bumped our way down the road, I fell asleep as Jayne enjoyed the hot breeze on her face. A pit stop after three hours for some Lychee Sunkist (slightly less chemically but more fizzy!!) and a leg stretch where the street vendors kept miming about how tall I was… Much to their amusement!! Back in the van for another couple of hours before we stopped at a crossroads. Having used our note book to try to explain where we wanted to go, the driver doubled checked with his limited English and our limited gesturing. The whole bus waited at the crossroads as he flagged down a mini bus going in the opposite direction to take us to where we wanted to go – he even paid for our fare since we weren’t going to entire way with him that we’d paid. A wave goodbye to him, the other passenger who helped, and the fruit selling ladies who had surrounded us to say hello, and we were speeding into the unknown – nothing about this route or the town of Taungdwingyi is in the Lonely Planet guide book… We were just hoping and praying that the information we’d read on the internet was correct!!! Drove past the sign for Beikthano ancient city and the bus driver stopped to show us – the site map showed us that this place was massive and, after the stupidity yesterday of walking in the heat, we knew we had to get a taxi at the next town. Bless the bus driver as he drove us around in the next town trying to find someone who spoke English to help us. He left us at the only hotel in town that took tourists – and did they use and abuse that!! Only said they had one type of room and they wanted to charge us $60 for a room, which is way over our budget. As we said that, suddenly more rooms appeared but at $55 and $50 they were still too much for us. Jayne headed off in search of a solution whilst I looked after the luggage. Summoned to a hut by the side of the road, I was treated to a story about Jayne using our notebook and the ‘point it’ illustrated dictionary to communicate with the local taxi rank and bus stand – apparently, they all thought it was hilarious. Having worked out what time the last bus to Magway was, she arranged for us to leave our luggage with the bus ticket sellers and we had two motorbike taxis waiting to take us around the ancient city site. Just as we were climbing on, the tourist police turned up – clearly very excited to see actual tourists – and chatted to me for a bit while Jayne drove off into the distance. The police demanded that my driver get me a helmet although they didn’t seem too concerned that it didn’t do up before they waved me off after Jayne. Slightly surreal pulling into the petrol station to have a whole truck of women smile and wave at you the entire time whilst the motorbike was filling up with fuel… Arrived at the entrance to the ancient city which had two massive statues outside.

The taxi drivers then took us to the (modern-ish) pagoda and the monastery.

Clearly, something was lost in translation, as they were showing us the new town rather than the ruins of the ancient city. Fortunately, we drove past a site map and, with a stick, we were able to point at the bits we wanted to see! Off the tarmac roads onto dirt trails, we headed for the some of the 63 excavated mounds within the area.

We saw the city walls, that are usually shaped like a rhombus, although slightly missing in some sections as people used to steal the bricks for building roads and railway tracks. We saw the ruins of pagodas, gateways, dwellings and the main citadel which, when discovered, had two massive feet on the plinth of their entrance. 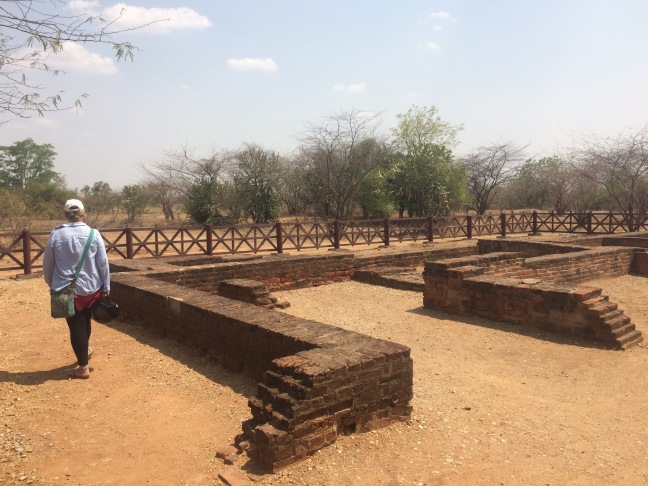 Our last stop was to the archaeological museum which was full of excavated objects such as burial urns, silver coins, jewellery, statues, bricks, tools, beads, toys and the feet sculptures mentioned earlier. We were showed around by a member of staff who explained everything as her colleague took photos of us! 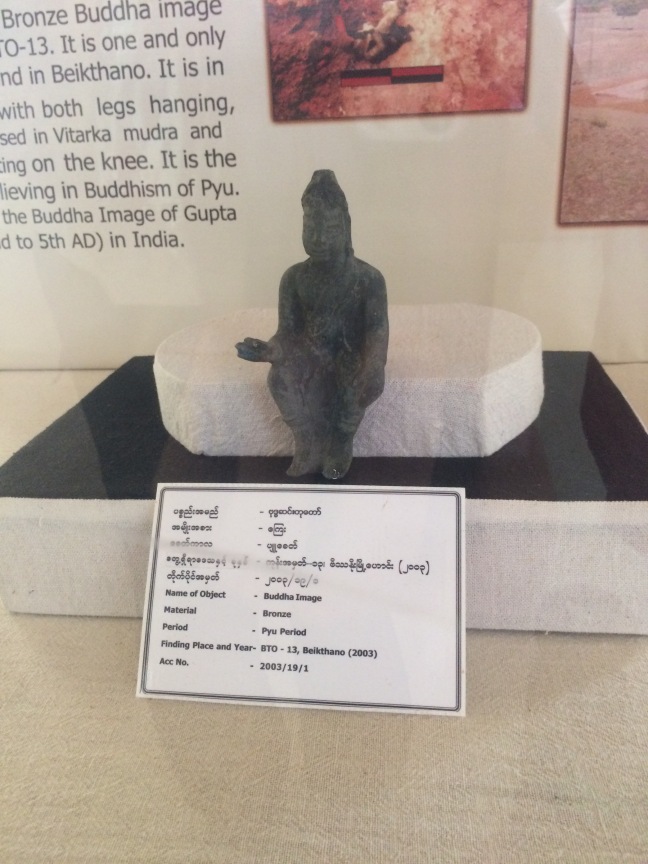 We even had a tourist police officer try to get a sneaky photo with us so we posed properly. Think I scared him when I put my arm around him… Time was running out so we jumped back on the bikes and headed the 19km back down the road to the bus station, having to pause midway because the bikes were too hot in the sun!! Got the bus and after 2 hours had arrived in Magway. Planning to spend the night in town before heading on to Mrauk U, we were surprised to find that there was a night bus leaving at 10pm. Decided that since it was only supposed to be a stopgap, we decided we might as well get the night bus and be in Mrauk U a day earlier. Walked down into town to pick up some snacks for the bus, we then found a little cafe to have some food – realising that all we’d eaten today was some yum yum bread sticks and shed loads of water!!! Some fried rice and chicken and mango juice later (which were the only two things on the menu that the waiter was able to translate for us) and we were both feeling more human. The waiters 3-year old daughter was fascinated by our life straw bottle and watched us avidly as we ate, even though her dad kept pulling her away. Went back up the the bus station and was offered a shower! Taken to someone’s house, it was a very strange set up with no where to get changed without someone watching you, when the guy asked us for money, it was an easy excuse to head back to the station and wait. A TukTuk drive later (which caused an argument between Jayne and the bus ticket seller) and we were waiting by the side of the road with a Polish man. A rather lovely air conditioned coach pulled up and we began our 12 hour journey to Mrauk U. Chatted to the French tourist and watched a few episodes of ‘Friends’ before we settled down and tried to get some sleep.