The security guards/conductors woke us a few times during the night to say we were at stops, ask for passports, etc. But, otherwise is was a relatively painless bus journey and much easier than we expected. The road that supposedly didn’t even exist was not at all as bumpy as we feared it was going to be and we even managed to spread out and get some sleep (I managed better than Katherine!).
Arriving at Mrauk U (pronounced Meow Ooh) at 09:30, we were quite happy to stretch the legs and felt we could manage the heat a bit in the attempt to head away from touts and find a guest house. A much smaller town than you’d think by looking at the map, we found one of the places recommended in the book with the smiliest two girls running around frantically to find the key to the bedroom and then for the aircon remote.

Settled, showered and stinky clothes washed we headed out for fried noodles and vermicelli. We asked the girls where to go and they said ‘For You’ restaurant. Being a complete idiot and making a bit of fun I said “For Me” food. One girl got it and was in hysterics, while the other one took a bit of time and could see the despair on Katherine’s face that signifies a bad-joke moment. I thought it was funny. Just to clarify, the name of the restaurant is ‘For You’. 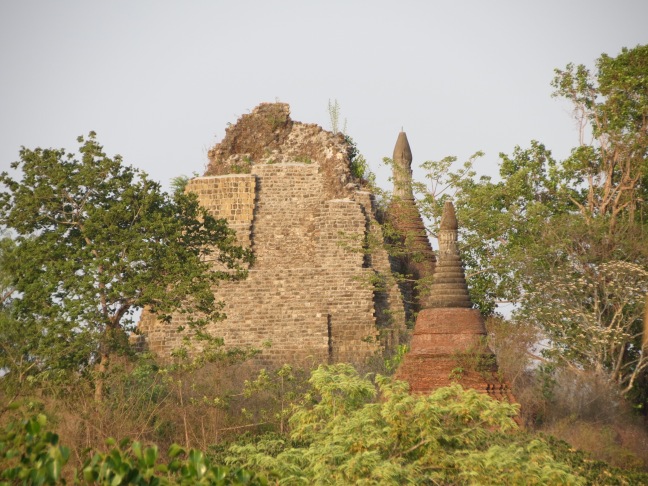 Plans of renting bikes or visiting some of the free temples went out the window. With a bit of food and a sit down we were zombied. Decided that we’d have a 2hr nap and after that we could hit the road at 14:00 and still see loads. Except we only got up at 17:00. Well, clearly needed it. Oops!
Thus, we booked another night accommodation and headed to the Haridaung Paya for the best views of the sunset. A golden orange sky with temples peppered everywhere, we could hear festivities parading down streets, birds singing and the views were incredible. We were the only people at the temple for almost 2 hrs which is beautiful in one respect, but sad in another, nobody is visiting this town compared to Bagan or elsewhere. 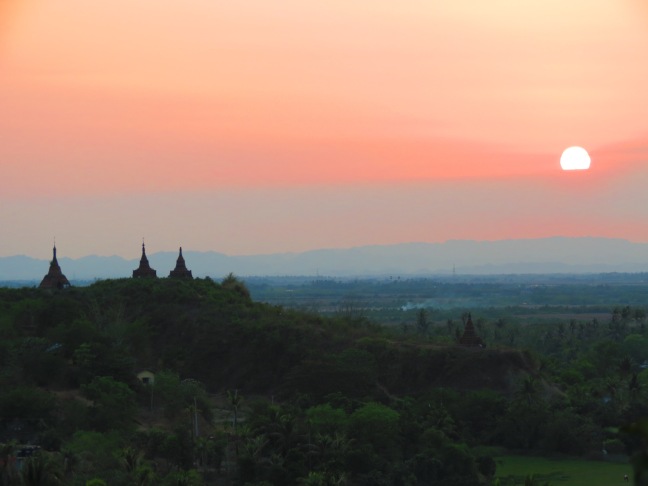 We went for dinner at Khuang Thant, recommended again in the book for the eccentric family that runs the place. And they didn’t disappoint. A myriad of dishes (loads of prawns in everything) and constant attention meant we had a nice sit down meal – even if the food isn’t quite to my liking. Back to the room for air con and Friends, we are ready for bed again.