The free breakfast at the hostel was an absolute feast, with the smiley young lady from yesterday bringing us more and more food. Fried eggs, toast, jam, fruit, cake and fried noodles were all washed down with the largest pot of coffee. Feeling rather full, it was quite nice to head down the street to rent bikes for the day. Cycled first to the ‘bus stand’ (the restaurant where the buses stop and the guy sells the tickets) to sort out our tickets for tomorrow to Bagan. Slightly confused and lost in translation about a night bus leaving at 7.30am, we got out the notebook and between me and the ticket guy, we managed work out that there was only one bus a day and it arrives at night (hence it being called a night bus!!). Got our tickets and cycled on to the Northern group of temples. We started in Shittaung Paya, which means ‘shrine of the 80,000 images’.

Inside, as you might expect from the name, are 80,000 holy images and it was built in 1535 by King Mintaikkha. The outside stupa is surrounded by 26 smaller stupas which get light up at night. We started by walking around the outside inner walkway, a 310ft passageway with sandstone slabs cut into six tiers displaying over 1000 sculptures. 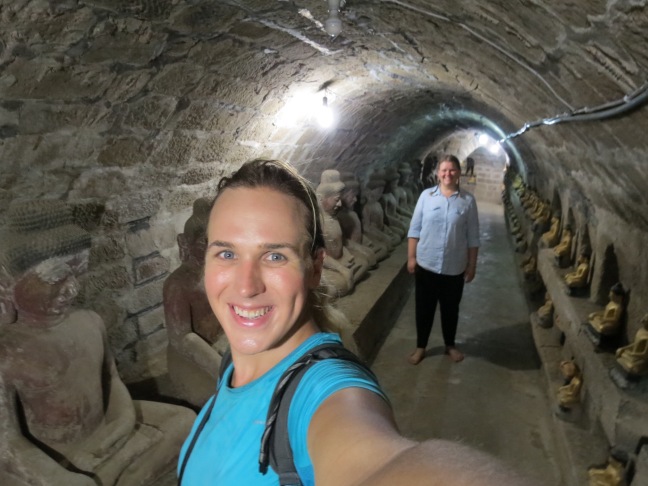 We visited the main prayer hall before going inside the inner walkway. The coiling chamber was full of school children who were looking at the Buddha images in niches and giggling loudly every time they saw us. The walkway wraps around on itself and we ended up at a dead end where there is a large Buddha footprint (apparently, Buddha walked on it after he reached enlightenment). Double backed on ourselves, scaring children as we rounded corners and listening to their footsteps as they ran through the corridor. We also saw the Shittaung Pillar, a 10ft sandstone obelisk which is considered the oldest history book in Myanmar – listing the Rakkine Kings from 638BC to 729AD. We jumped back on the bikes and headed across the road to the Dukkanthein Paya – another labyrinth temple that circles round on itself three times before ending up in the main prayer hall. The corridors were full of images of Buddha and common people – apparently displaying all of the 64 Mrauk U’s traditional hairstyles.

We then visited as few other, less ornate and complex, temples before cycling for about 3km to visit Kothaung Paya which is Mrauk U’s largest temple. Built in 1553 by the son of King Mintaikkha who wanted to ‘out-do’ his fathers temple so built a shrine of 90,000 images. The images line the outer passageway, with a lower and upper passage surrounding the huge bell-like stone stupa. The ground was becoming unpleasantly hot and, as we had to be barefooted, we appreciated the view of the images from the sanctuary of the shade as we ran from corner to corner of the walkway. 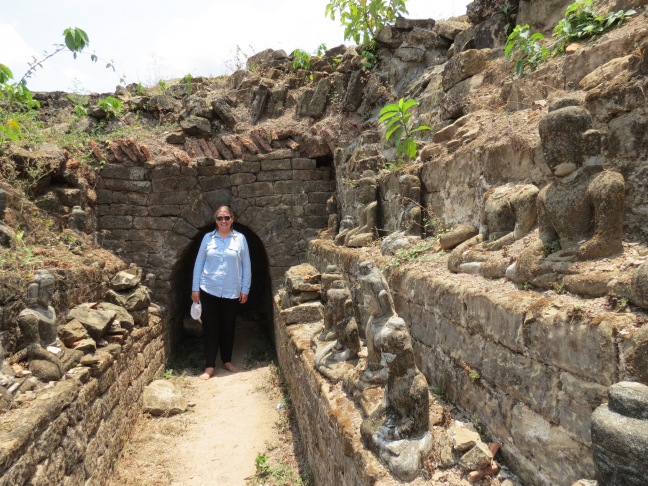 As it was getting towards the middle of the day and we were both a ‘bit’ hot, we decided to head back to the hostel for some drinks and a rest. Stopped at a few more temples en route, which were all deserted and some of them you could see where they had repaired the Buddha statues (apparently, all the statues were headless when the sites were rediscovered). Watched a couple of episodes of ‘Friends’ under the air conditioning unit before heading back out. Went to the Mahabodhi Shwegy, a temple known for its illustrations of tribumi (the Buddhists version of heaven, earth and hell. We were told that there were erotic carvings in this cave but, having been to the Karma Sutra temples of Khajuraho, a sculpture of a man grabbing a women’s breast was incredibly tame!!! 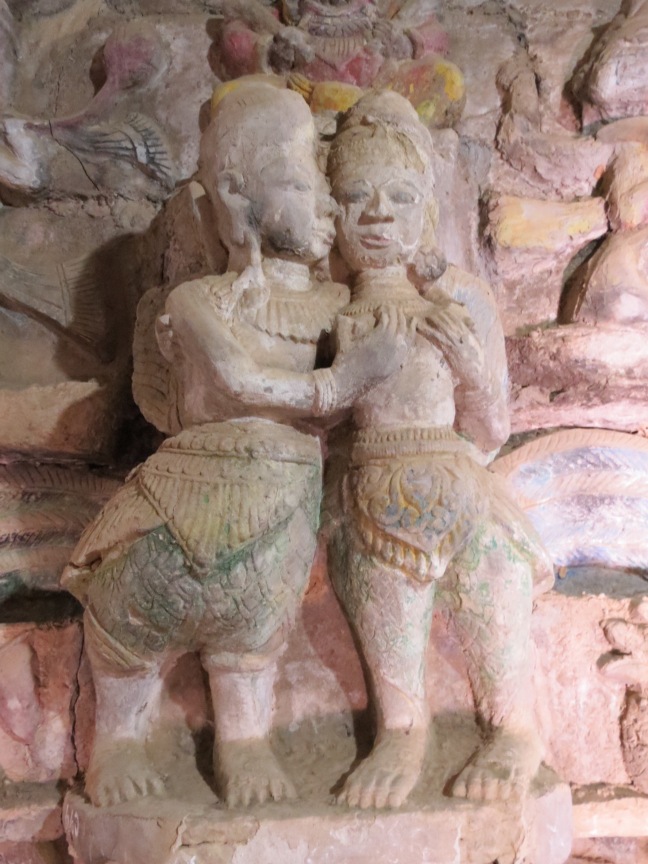 We visited a few more temples in this area, pushing our way through the overgrown grass and vines feeling very Indiana Jones!!

The last site we visited was the Pitaka Taik one of seven libraries left out of the orginal 48. A tiny but highly ornate building built in 1591, our photos are slightly ruined by the blue and maroon shelter protecting it! We dropped our bikes back and bumped into Fred, the French guy we met on the bus yesterday. Sat in a cafe having a Fulidhoo drink as we all chatted about our various travels – he has just come from Ethiopia and his stories certainly made us want to visit… Maybe one day!! Decided to go back up to the Haridaung Paya to watch the sunset and met an American girl who we chatted to for a while and she recommended Indonesia – if we keep talking to people about their travels, we are going to have a never ending list of places we want to visit!! Went to the restaurant next door to the hostel for dinner – a slightly tough pork with ginger and spring onion for me but a delicious hot and sour pork for Jayne was washed down with far too much Myanmar beer.