What a simple yet awesome day! Bags pre-packed and with a wholesome breakfast we set off trekking early. We hoped that by doing so we’d arrive at the sites before others and enjoy them in the peace and quiet. Also, if we got lost we thought we could tag along behind someone when they caught up. But, as it transpired, there didn’t seem to be anyone else out and about but it was easy to navigate so we needn’t have worried.

The heat and humidity were intense. We passed through areas in the field were there was what can only be described as heat bubbles, much like a thermocline when diving. 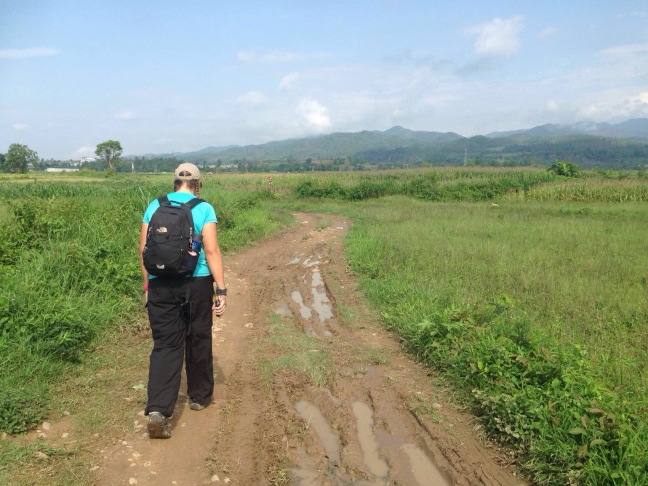 We made our way down the paths and beside the streams and we had only a small uphill bit at the end before we were at Nam Tuk Waterfall.

Before we could even take the bag off, cool down or find somewhere to sit, we were descended upon by a local girl wanting a photo with us. Sweating, out of breath and generally looking grim, we can’t imagine she’ll be showing the photo to too many people. The local group finished their whisky and shandy and headed off to the limestone cave around the corner.

We got to enjoy the harmonious roar of the waterfall in peace and spent ages just looking at it cascade down the rock face.

We retraced our route back past the rubbish dump, with the smoke from the various fires blowing across the pathway as opposed to earlier when it blew across the fields. Back through the cemetery, each section distinctly different depending on where you were – Chinese, Buddhist or Muslim. We witnessed the tail end of a funeral, the gold-roof pick-up truck tucked away discreetly next to a funeral pyre that was still blazing. The procession headed off in three flat-bed trucks as we were arriving and we we showed our respect as best we could and carried on.

Through the local village where we presume you make the bamboo hand fans if you go on an organised trek – at 15,000ks per person – we easily found the dam that is the last significant landmark before you look for the hot springs. Deciding to be more adventurous, we crossed the river upstream of the dam in oozy, terracotta coloured mud and gravel.

At the far side of the river was one of the outlets of the hot spring, and the very clever locals had dug down a bit to form a bit of a shallow bath tub. It was luke warm and warmed up the feet nicely from traversing the river. But, all good things have to come to an end, and with three local lads jumped in the hot springs (one being completely stark naked), we carried on in to the jungle in search of a bigger, better spring.

We left our shoes off and walked up a road that soon became clear was being used as a route to a cliff, now a quarry. The sharp rocks underfoot were painful, but we were covered in mud from the walk and we wanted to get out of the rain that was about to downpour. We crossed the river again and took shelter in a cave, but fearing the idea of snakes having seen so many reptiles in this country. The rain continued and we decided that since we were already drenched to continue upstream and investigate. The river was now a fast flowing chocolate deluge akin to a scary version of Willy Wonka’s chocolate factory. The waterfall was pouring down mud instead of water and there was no hope of finding any more hot springs. So we turned around and started home.

We got a bit lost in the rice fields and then got directed to the main road by farmers feeling sorry for us.

We managed to find a trail with the wonderful MapsMe app and thus we started another adventure traipsing through shallow streams, knee deep ponds and cattle worn tracks back to town. The locals loved seeing us and it was so peaceful the entire way.

The rain had taken away the unbelievable heat of the day and we were back in Hsipaw before we knew it. A nice shower to get rid of all the mud and we were back out to the restaurant to indulge in another helping of Chinese food. Tired and starting to ache, we were kinda glad that we had an easy bus journey coming up tomorrow.