The day started with a lovely hot shower, both of us fully aware that it might be our last shower for a couple of days. Dressed in trekking gear again, we headed down to breakfast. Another feast of coffee, toast, omelette and mango before heading back to the room to reshuffle the bags – the two smaller rucksacks full of things we needed whilst trekking and the large backpack to be sent ahead of us to Inle Lake. Met Ko Aung at 8.30 and headed out of town straight away.

Walked past the Christ the King Church – built in 1882 by the British it was run by the same Italian priest from 1931 to 2000. Continued walking out of town, the sweat dripping off all three of us – a much easier trek than anything we had done in Nepal but the heat and humidity providing a new challenge! Walked through, what was described as, a rainforest although we both think it was actually a pine forest.

‘A little bit up and a little bit down’ was exactly right – never ascending for longer than 10 minutes – it was a really enjoyable morning. Stopped for a water and snack break next to a reservoir as Ko Aung told us about issues previous clients had had… Apparently, one claimed he was running, another accused him of killing them and a third cried cause she got mud on her shoes. This then became our joke for the next three days, moaning in dramatic flare whenever the mood took any of the three of us! Continued walking, picking our way through the forest, occasionally walking along a stone road and over several boggy patches. Thank goodness Ko Aung had made me a walking stick otherwise there is no way I’d have been able to traverse the bogs using just the strips of bamboo laid down. Came out of the forest to a viewpoint and watched as local villagers tended to the tea plantation.

A short walk further on was our lunch stop for the day – a purely tourist cafe with an incredible view. A couple of other (large!) trekking groups were there and, based on the dynamics of the groups, we were both glad we paid the extra couple of dollars to have our own private guide. Lunch was simple – chapatti, curry and fruit – before we continued walking. Ko Aung started mentioning that we were fast walkers, which made me smile so much since I’d consider myself a dawdler at best!!!

Got to walk along the train tracks for about half an hour, looking at the broken sleepers were the train had come off the track a few months ago – apparently not killing anyone but cutting off limbs of several people who were sat on top of the carriage… Arrived at a train station and had a snack whilst watching the fruit vendors get ready for the approaching train. 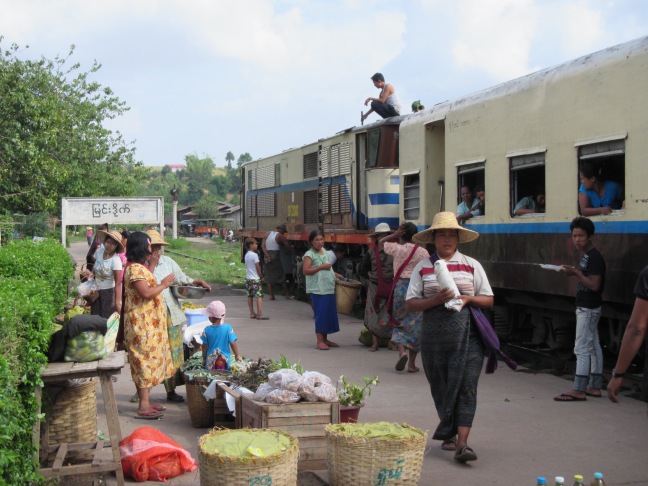 Watched the station come to life and, upsettingly, missed capturing a photo of the soldier gesturing Jayne over before grabbing her hand to kiss it!! Another couple of hours walking through the countryside before we arrived at the homestay.

We were both offered a shower – turns out it was a bucket of water and concrete floor which was ‘hidden’ from view by a low bamboo fence (although the kitchen window looked out directly into the shower area!!). Jayne decided to give it a miss but, feeling disgusting from a mixture of sweat, dirt and suncream I thought ‘when in Rome’!! Used my white scarf to give myself some modesty (until it got wet and went see through!!) I had a very bizarre rub down with soap and water. Feeling slightly better, we played a few games of UNO – teaching Ko Aung how to play and then he kept putting down +4 cards on me!!! A thunderstorm was visible in the distance with the lightening flashing within the clouds every few seconds, making it look like a firework display. An absolutely massive dinner feast of five different local curries and fruit meant we could barely move. 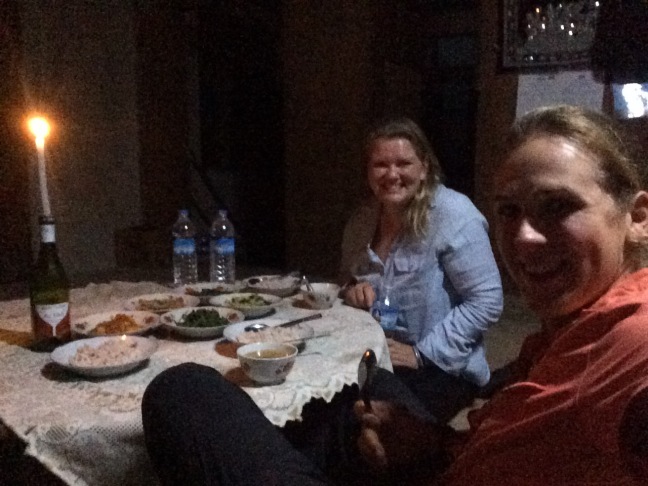 All lights were turned off around 9pm so we settled down on the floor of the barn to try to get some sleep.