The electricity had gone during the night so we were packing in the dark. It was typical that only after finishing breakfast and about to leave that they started the generator. Leaving the quirky antiques and eccentric decorations behind we were escorted to our tuk tuk by one of the ladies at the inn. Well, somebody was escorted, while the other enjoyed the rain. Guess who was treated like royalty???

The locals tend to get on with their work and day-to-day life in the downpours. They have no idea how long the rain will last or if there will be enough of a respite in between showers to get where they need to go or do whatever it is that needs doing. As such, we picked up a lady passing the market, with three massive wicker baskets full of fruit & veg (mostly tomatoes) and saw a couple of monks with their beautiful paper and bamboo umbrellas walking in to the city to one of the temples. 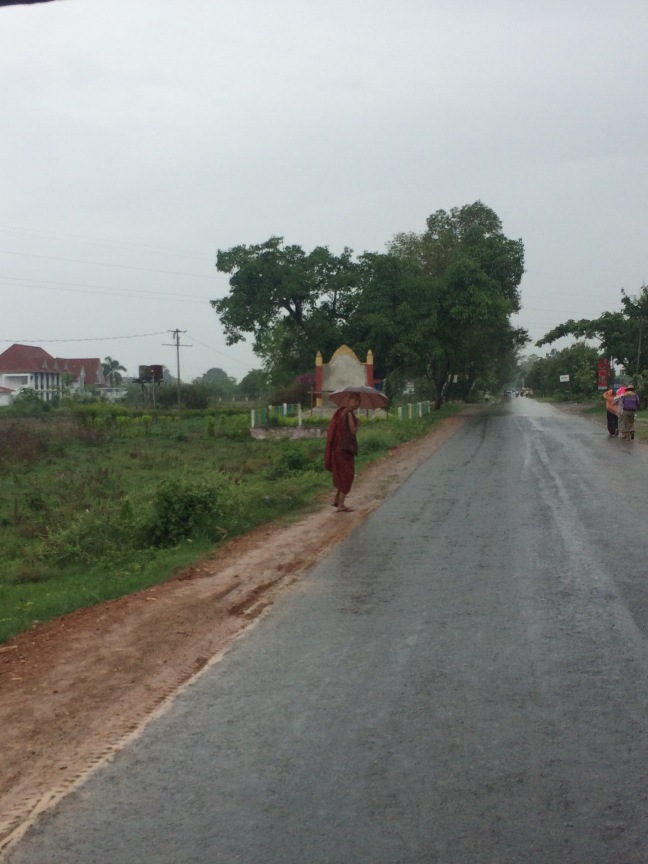 The rain briefly abated to glorious sunshine and intense heat when we stopped for a lunch time pit stop. The girls at the restaurant thought we were incredibly fascinating or funny (maybe both) and used every plausible excuse to visit our table – more kimchi, more soup, checking we were OK. They found it hilarious and were in fits of giggles every time we spoke a bit of Myanmar. We bought a packet of beans and banana chips and went to stand in the shade of the building and watch the town folks go about selling to passing buses that weren’t stopping. It was with mixed feelings that we got back in the bus… the air con was already a welcome relief, but the gentleman in the front row had not cleared out his system and was still heaving and puking quite noisily for the rest of the trip. The smell got so bad that one girl was pretty much leaving the Vicks vapour stick up her noise and the conductor sprayed air freshener into the air con outlets to spread around the bus quicker.

We arrived in what we thought was Naypyitaw, but was in fact the main bus station north east of the city. The main station for the capital and the hotel zone was north west of the city. We weren’t prepared to pay 50,000ks to get us to our hotel so we waited for the bus to continue its journey and get us a bit closer. By which time we were prepared to jump on the back of a motorbike taxi (working out 3,000ks cheaper than a taxi) (with rucksacks) and speed down the empty highways to The Golden Lake Hotel. But sure of course, didn’t the heavens open again and the entire city became a golden lake with the streets now covered in a pale orange glow on a tar-macadam road that was saturated so quickly as to be a continuous shallow lake.

We arrived safely – albeit a bit wet – and dumped our bags before enjoying a pork Myanmar curry, a hoisin chicken clay pot and lavish attention from a waiter. We didn’t get the golf buggy back down to the room, but pretty much collapsed in to bed after an uneventful yet tiring day travelling.