Possibly the best beds that we have slept on in a long time! Both of us felt a million times better than we have in ages even if the torrential rain storm did wake us up several times during the night as the raindrops sounded like golf balls dropping onto the roof. Showered and dressed before heading to the restaurant for breakfast. A slightly weird set up where you would pour your own coffee but they would carry it to your table… The buffet breakfast included fish which, although we both scoffed at the thought of eating fish for breakfast, was actually really nice. Fully loaded up with orange marmalade and plenty of coffee, we went to reception to organise motorbike rental and a late check out. They wanted us to rent two motorbikes but when we told them that Jayne didn’t have a bike license they let us rent one. Went back to the room whilst they organised the bike to find the wifi working – finally!! Sent a few messages to parents to let them know we were still alive before picking up the bike. Clearly concerned with a weight issue, they had organised a ‘proper’ motorbike with gears for us to use (unlike the scooters I grew up riding in Paris and the type of bikes we’ve always rented in SE Asia). Having only used a bike with gears on my CBT, over a year ago, I decided to go up and down the road in the hotel before Jayne jumped on and we braved the roads! We were told that we needed to put some petrol in it and were pointed in the direction of the nearest man selling it out of old water bottles by the side of the road, 4km away. Except, we never made it… About 50m away from the petrol man, the bike stalled and we couldn’t restart it. Would have been scary but the roads here are absolutely deserted! Fortunately a man pulled up next to us (we think it might have been one of the guys from the hotel) and tried to help us restart it. No such luck, so I pushed it over to the side of the road and down to petrol man who filled us up with, what looked like, very watered down petrol… Anyway, the bike jumped back to life and we were hurtling down the road towards the Uppatasanti Paya temple, with Jayne doing some excellent navigating from behind. Happened, purely by accident, to fall upon the infamous 8-lane highway. A rather surreal experience as the road was practically empty – enough for us to feel completely comfortable to take photos standing in the middle of the road! 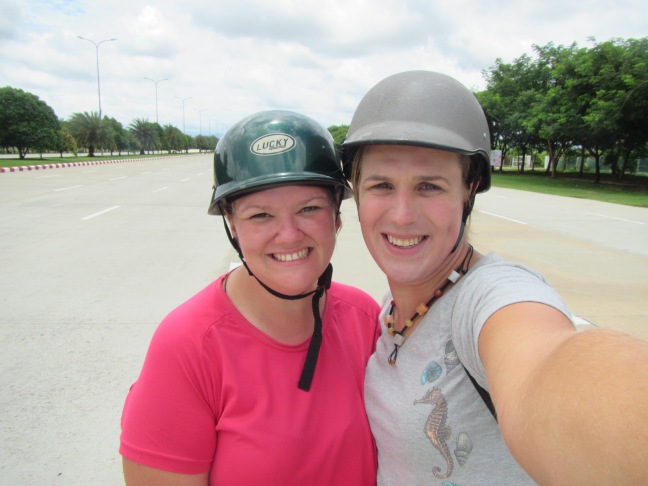 I drove up and down parts of the highway by myself, enjoying the speed of the bike before Jayne hopped back on and we continued on our way to the temple.

Located at the top of a marble staircase (or a lift, if you’re feeling lazy) is a 98m tall golden pagoda. We had seen it last night from the bus window, looking impressive in its illuminated glory!! We both thought it was just as nice in the daylight, despite the criticism from the guidebook about it being hastily constructed and poorly finished.

The inside wall is lined with murals depicting the life and legend of Buddha along with some key scenes from Myanmar’s Buddhist history, all carved out of stone. The mural with the man and his necklace of atoms fingers was particularly intricate… Wandered around the inside and outside, enjoying the panoramic views of the valley before picking up the bike and driving round to see the elephants. 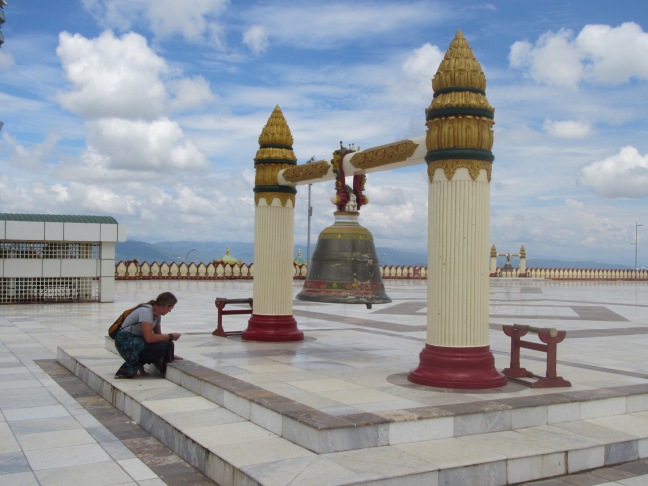 There are 6 white elephants housed at the temple, along with two grey ones. Have never seen a white elephant before – I’m guessing they are basically an albino version of grey elephants but their pink ears and pearly eyes were bizarrely fascinating. 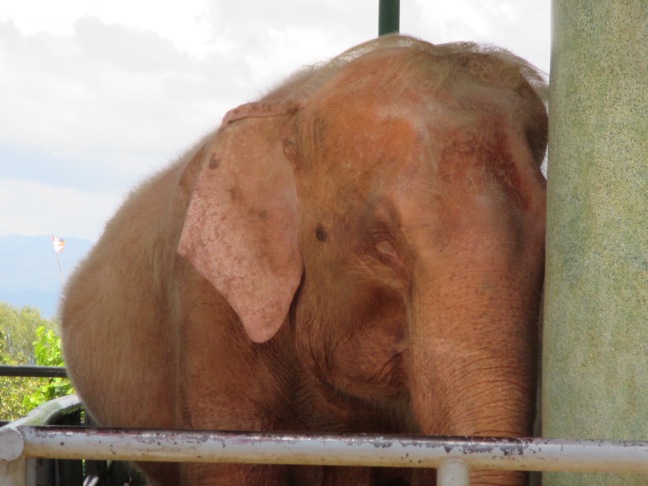 Back on the bike and to the 8-lane highway to let Jayne have a go at driving. Feeling a bit nervous, I think we were both just glad she didn’t do a wheelie like she did in her CBT…

After she had a go (whilst I stood in the middle and on the side of the road taking photos), I got back in the drivers seat and started making our way back to the hotel, stopping at a shopping mall to get some snacks for the bus later and to get some lunch.

Back at the hotel to upload some more blogs whilst the internet was still working whilst Jayne tried to clear some space on my iPad so I could download some films and more books to read. Had to call the little golf cart when we checked out to take us to reception as it was chucking it down with rain again – we were told by reception that monsoon season has officially started! Got a car taxi to the bus station (wasn’t prepared to get on a motorbike in that kind of weather) and had some dinner at a local tea shop whilst waiting for our bus to arrive. 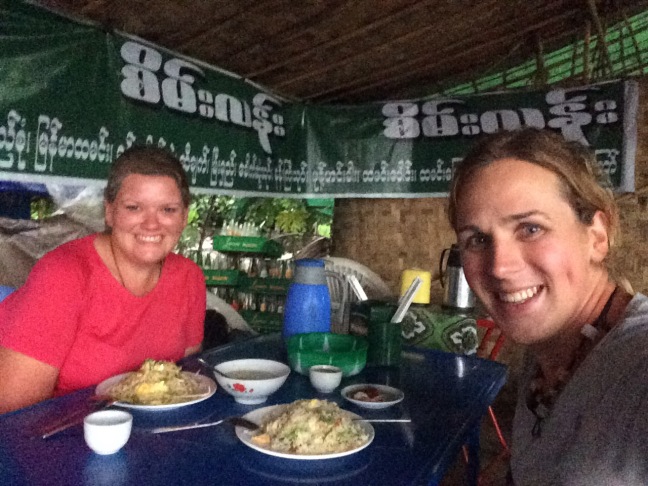