So, that weird E number drink from last night brought me out in a rash – ended up taking two anti histamines during the night just to make the itching and redness go dow. So it was slightly understandable that I woke up groggy and heavy headed!! Ate breakfast of toast and fruit with two coffees whilst I waited for my head to catch up with the rest of my body. Used the time to do another load of washing – I don’t think our clothes have smelt so nice in months! After breakfast, we used our last day in Ayutthaya to cross the Chao Phraya River and explore one of the ancient temples outside of the Ayutthaya island. It was a 5km cycle in the blazing hot sun to the temple and we literally inhaled the water when we arrived. Wat Chaiwatthanaram was built in 1630 as the first temple of his reign by King Prasat Thong as a memorial to his mother’s residence in that area.

The temple name means ‘the temple of long reign and glorious era’ and was where the King and his successors performed religious ceremonies. Princes and princess were cremated here, including King Baromakot’s son (Prince Chaofa Thanmathibet) who was whipped until death for his affair with Princess Sangwal, one of the King’s concubines. His father then ordered the construction of a chedi to shelter the relics of the prince. 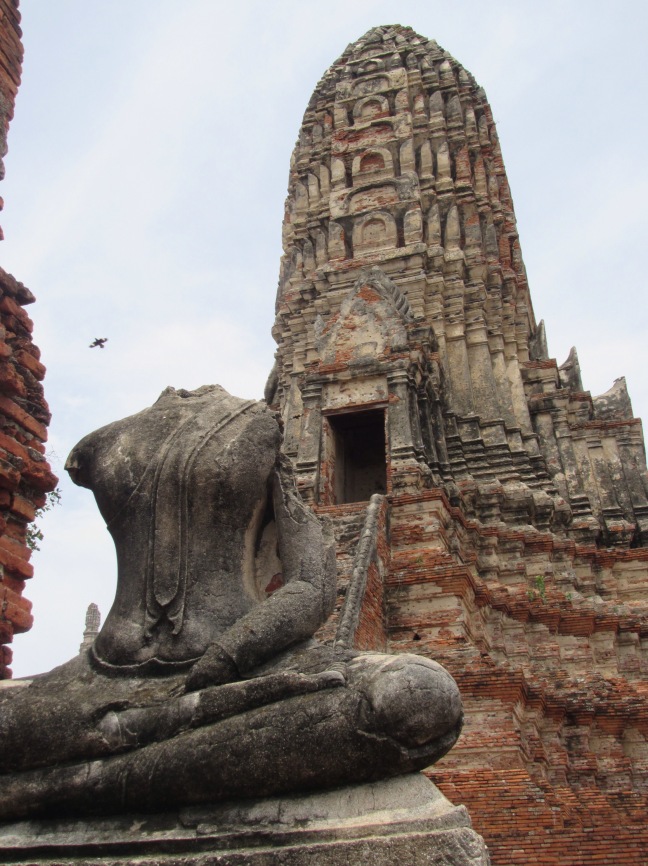 We walked around the temple, enjoying the de headed Buddha statues and watching a local couple have their wedding photos taken. There was also descriptions about the stucco relief panels that were depicting various scenes from Buddhas life. We were both glad they were there as it would have been hard to tell what the images were truly depicting without the information (think there may have even been a bit of poetic license used to describe the non existent images!!). 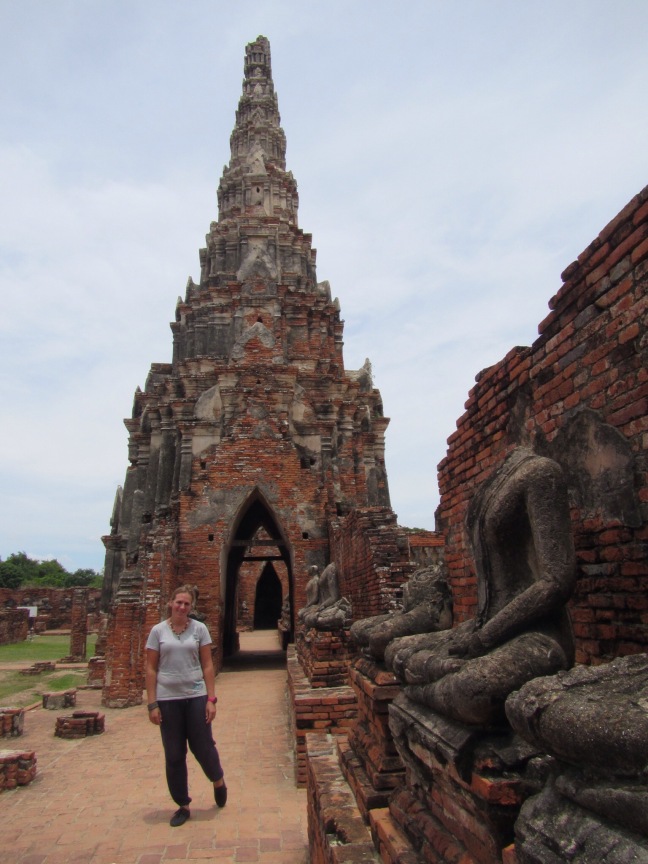 Jumped back on the the bikes and cycled just over a kilometre to the 7-eleven shop to get some more water and some lunch. Had a toasted pork sandwich and crisps before crossing the (very) busy road and visiting the Wat Kasatrathirat opposite. Built in the Middle Ayutthaya period (1488 – 1629 AD), it is a monastery that is still used by the Buddhist clergy. A really beautifully quiet temple, it had super hot marble floor tiles as we walked quickly between the ordination hall and the group of viharas. It also had a sermon hall with beautiful mural paintings of Lord Buddha’s life story. 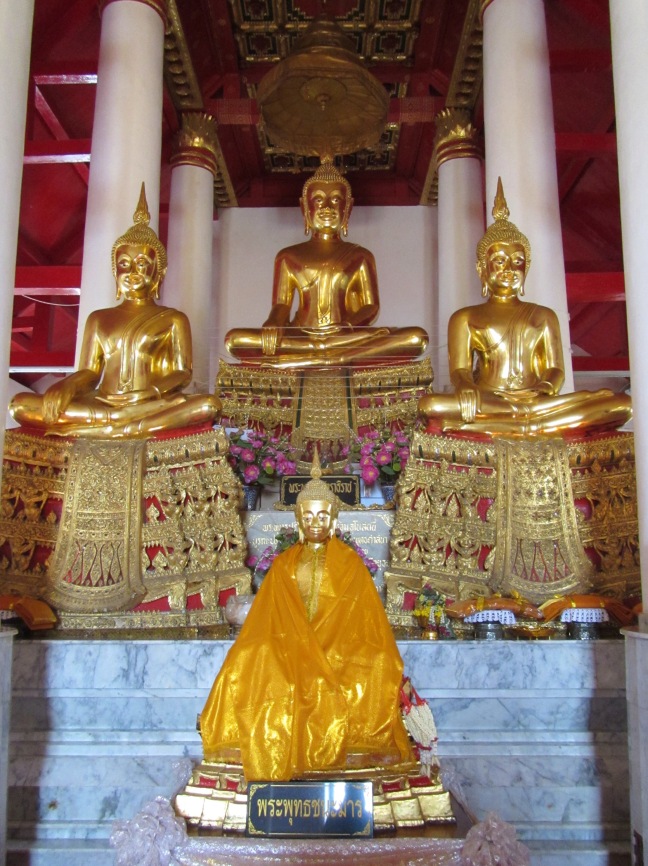 As we slowly made our way back to the island, we stopped for a quick rest in Sri Nakakharh Park, enjoying the view of the river and playing with the cutest puppy ever – we both wanted to put him in our bike basket and ride off but the owner clearly knew of our evil plan and hurried away!!!

After a bit of navigation issues from yours truly, we arrived at Wihan Phra Mongkhon Bophit. Noted mainly for having one of the largest bronze Buddha statues in Thailand, the large bronze (guilded) image was built in the early Ayutthaya period. The total height of the statue is nearly 17 metres high, including the 4.5 metre high base. Like many of the other buildings in the area, the vihara was destroyed by the Burmese in 1767 and reconstruction was completed in 1957.

A short walk away is Wat Phra Si Samphet. 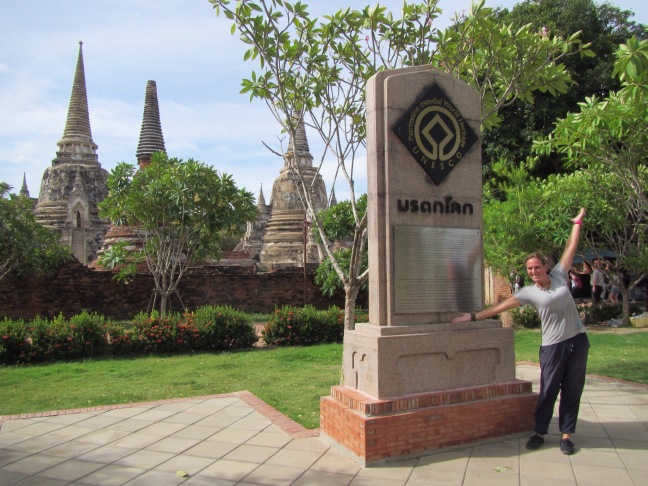 Considered the holiest temple of the site of the old Royal Palace, the three main stupas in this temple contain the ashes of King Boroma-Tri-Loka-Nat, King Rachathirat III and King Ramathibodi II. 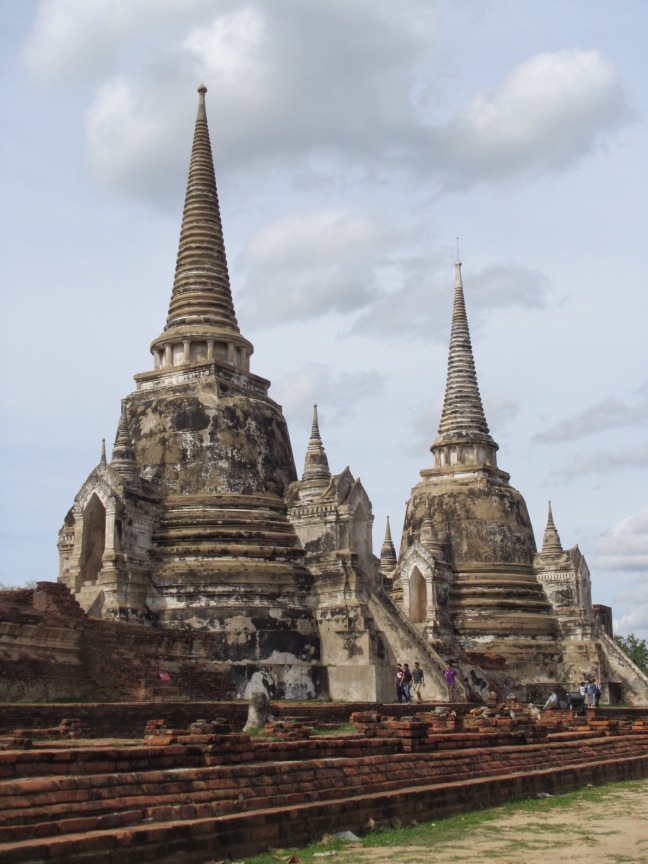 The original temple was constructed between 1350 and 1351 but, again, was damaged by the Burmese. The Wat Phra Si Samphet was the temple of the royal family; no monks lived there. The Wat was used exclusively for royal ceremonies (such as swearing allegiance). It also served as the royal families private chapel and was the place where the royal family’s ashes were preserved.

As we were leaving the temple, it looked like it was going to start raining and, since we had left washing out to dry, we went back to the hotel – making it just in time! Since it was getting pretty late in the day to visit another temple (they all close at 18:00), we decided to call it a day and head to the night market instead for dinner. Today’s street food crawl included papaya salad with Pad Thai noodles for starters, Thai green fish curry for main and mango with sticky rice for pudding. I got myself a sugar cane juice (which Jayne finished) whilst she got herself a weird condensed milk drink full of jelly bits, coconut strands, butter beans and prunes – it was actually nicer than it sounds! 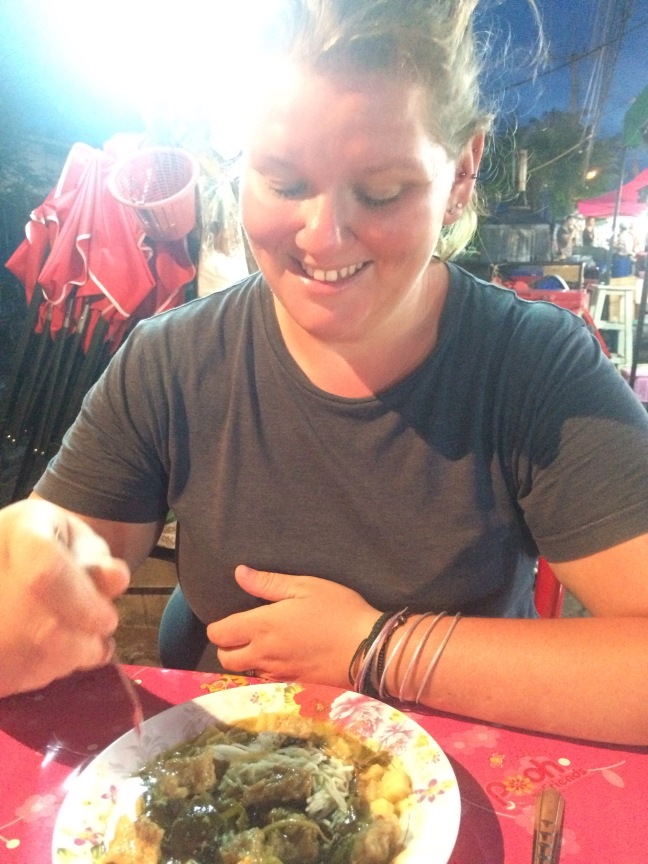 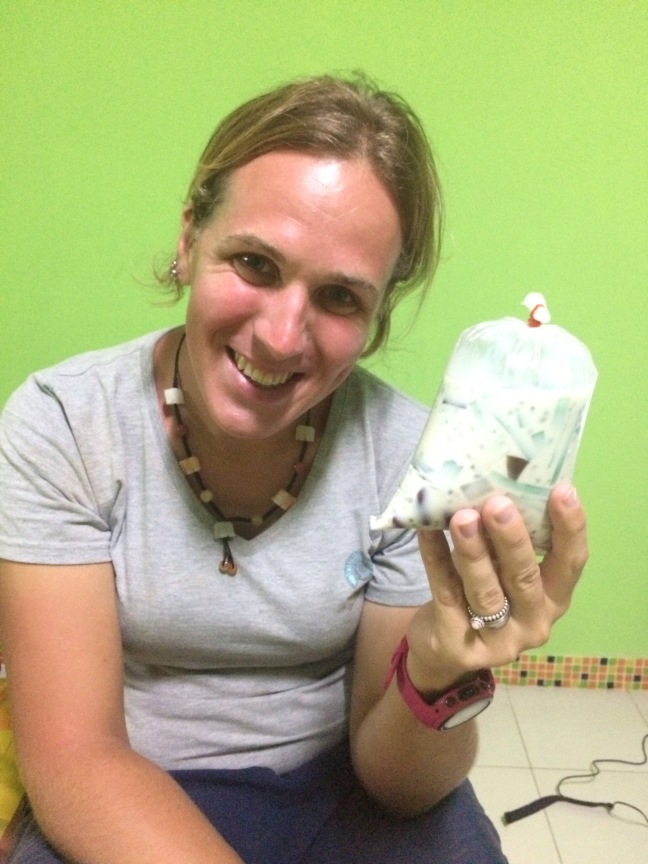