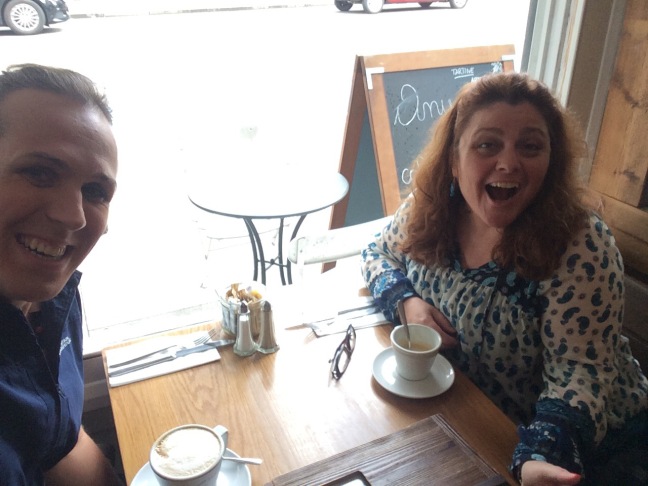 I eventually got up off my ass, having spent the morning clearing the Hard Drive of films and tv series and freeing up space for all the photos to come. I grabbed a train to Wimbledon and the 57 bus out to Tooting Broadway. I can’t remember ever having gotten off there and was surprised (and slightly excited) to see that there was a Primark (Primarni – for the posh people shopping cheaply). I got some new plimsoles, a smaller headphone splitter to the one we have and a handy little USB charger ‘do-da-thingy’.

I killed some time in the 99p store, before meeting up with Jo, my boss from Lifeways, the amazing place I worked before jetting off to travel the world. We spent a brilliant few hours chatting. We went to a Sri Lanka restaurant where I was able to order some exciting new stuff for her to try. What I remembered calling Idly is actually Vadai – a potato doughnut served with a chilli, coconut dip. I also ordered a Masala Dosa, although it wasn’t nearly as big as the ones I remember/used to, plus it only came with sambal (chilli coconut mix?) and a nondescript curry. The pièce de la rèsistance was – as some might have guessed – chicken Kotthu. Not nearly as spicy as Trincomalee or other remote areas of Sri Lanka, we both tucked in and it was fab. Not doing any good to Jo’s new strict diet, I hope it was worth it. So, having literally and figuratively ruined our tummies for the next few days we threw caution to the wind and had carrot cake, red velvet cake and coffees in a cafe a few doors down. It was awesome catching up and we spent ages chatting about our respective adventures; Jo have recently done Antarctica and heading off to Glastonbury in 2 days. By the time we parted ways I think I managed to convince/sway her to visit Sri Lanka and possibly squeeze in a trip to the Maldives and Myanmar. I’m such a bad influence. First the diet, then the holiday budget. Down the road there was a massive M&S, so I managed to get some new underwear, replacing the poor old hand washed for 8 months, falling apart, piece of rags that I still had. I also got a small atomiser in Boots so that I could do away with the little glass perfume bottles and some new shampoo, conditioner etc not to use any more of the luxuriant products that Narae had provided. With traffic ground to a halt and buses not moving either, I walked in the Wimbledon. I had hoped to pop in to Blacks and get some new trousers but I missed them by 9minutes. Finding Dory isn’t out in cinemas yet or wasn’t showing in the Odeon, so with both plans scuppered in town I headed home.

I was unexpected back at the Park household and yet I was still offered dinner. A beautiful medley of Korean food and it was pure gluttony that saw me eat a selection of kimchi, gyoza, omelette, avocado, prawn & miso soup, dried fish & walnuts and what is described by the famous chef Rick Stein as snot, a fermented soya bean called nato. It was a funny texture with stringy goo holding the beans together in what otherwise resembled a pile of bogies. But, they are good for you and I ate ’em. Needless to say I waddled to bed.

Tracey went back to work today and I was home alone. Eerily weird to walk around someone else’s house when they are not there – I still had to shower with the bathroom door closed! Made myself some breakfast and watched a bit of early morning television before I got started on my list of jobs. Some call it dreaming… I call it planning! That was my task today. Trying to assemble some sort of a route for our travels around Australia, hitting as many UNESCO sites as possible without making us bankrupt – it’s an impossible task! Spent time trying to work out what there was to do in each of the towns we wanted to visit and working out a rough price for each of the things we may want to do (FYI, every time I read the word ‘free’, my heart fluttered a little bit!!). Having covered our map of Australia with highlighter pen, circles, pen lines in to the sea and post-it notes (with a text to Tracey apologising for using up the majority of her post-it notes), I have a vague idea of where we are going to go and what kind of things we are going to do. 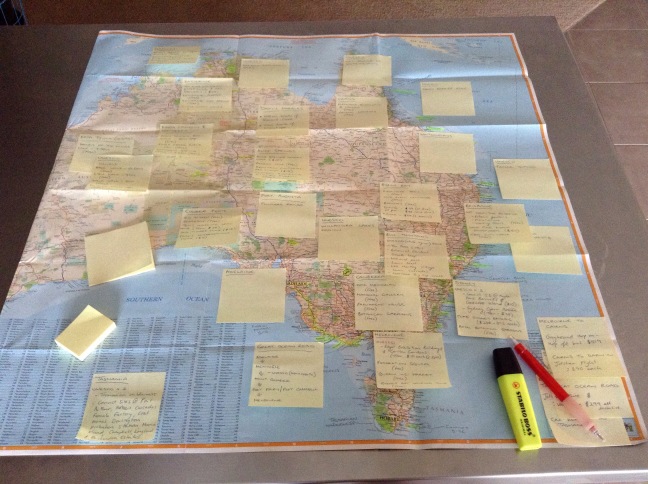 Not going to be able to do all 19 UNESCO sites in Australia, which is kind of disappointing, but it equally means we’ll have to come back one day. Tracey came back from work, dropped off Chilli dog and went straight back out to Pilates whilst I skyped Jayne and showed her the current mess that I had created on Tracey’s dining room table. A dinner of spaghetti bolognaise whilst we watched the final episode of series 6 of ‘Game of Thrones’. Now, I have only ever watched the very first episode with Jayne, which was declared a ‘WTF is this?’ experience and I have never watched an episode since, much to the disappointment of Jayne who is a big fan. I won’t spoil it for anyone but this is how I watched most of the episode…

Therefore, ‘Game of Thrones’ still remains, and possibly always will remain, a ‘WTF is this’ programme – think I’ll stick to ‘House Rules’ and ‘Modern Family’!! A quick Skype with Jayne before bed. 15 days to go!