An early start to catch our 6.31am train from Shepparton to Melbourne. Tracey very kindly dropped us off at the station and it was an easy (and quiet!) 2.5 hour journey through the countryside, catching up on writing blogs and continuing our ‘spot-the-kangaroo’ game. Arriving in Southern Cross Station just after 9am, we headed straight to Thrifty to see if we could pick up our car rental early. A couple of signatures later, we had the keys and directions to find our small automatic car… It’s bright pink!!
Navigated our way out of the city with no problem and we were on the highway heading towards The Great Ocean Road. Driving through quaint villages, calm seaside towns, pockets of rainforests and vast expanses of green, the views of the sheer limestone cliffs were a perfect background to the crashing waves of the Southern Ocean. We stopped at several places along the route to Apollo Bay to look at the viewpoint and take photos, timing it carefully to avoid the sporadic downpours of rain.

After about two hours of driving and photographic detours, we ended up at our first ‘official’ stop of the day – Split Point Lighthouse. Since both of us grew up watching the children’s television programme ‘Around the Twist’, it was a must-see for both of us to see the lighthouse and house that was used during filming. 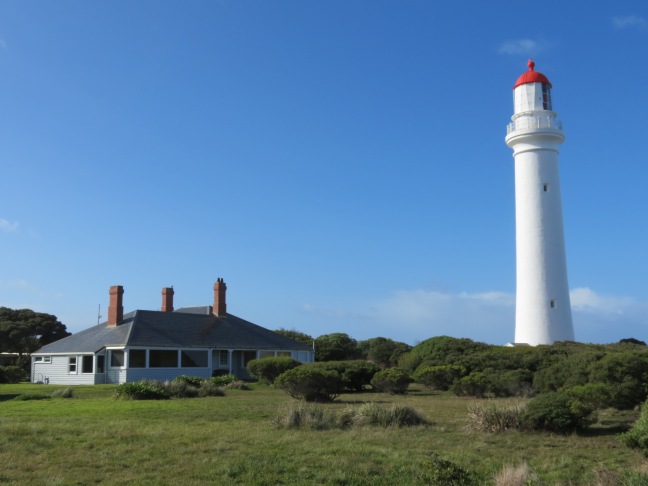 The walk up to the lighthouse was beautiful, even though it was slightly soggy and windy! I did a tour of the lighthouse, climbing to the top and looking out whilst Jayne decided she’d rather keep both her feet on solid ground, especially after she scared herself last time she climbed a lighthouse in Cuba.

I learnt about the history of the lighthouse on the walk up to the top, ranging from the four different ways that they had lit the torch over the years, to where the lighthouse was made (Birmingham, England). I also learnt how they communicated with ships in the olden days, including a network of underground telegraph networks between lighthouses along the coast. I also learnt that this particular lighthouse had a special design of having 2 metre thick walls at the bottom and half metre thick at the top (something to do with sustainability and protection from the elements). The cast iron staircase was beautifully ornate and the lighthouse itself was in great condition. 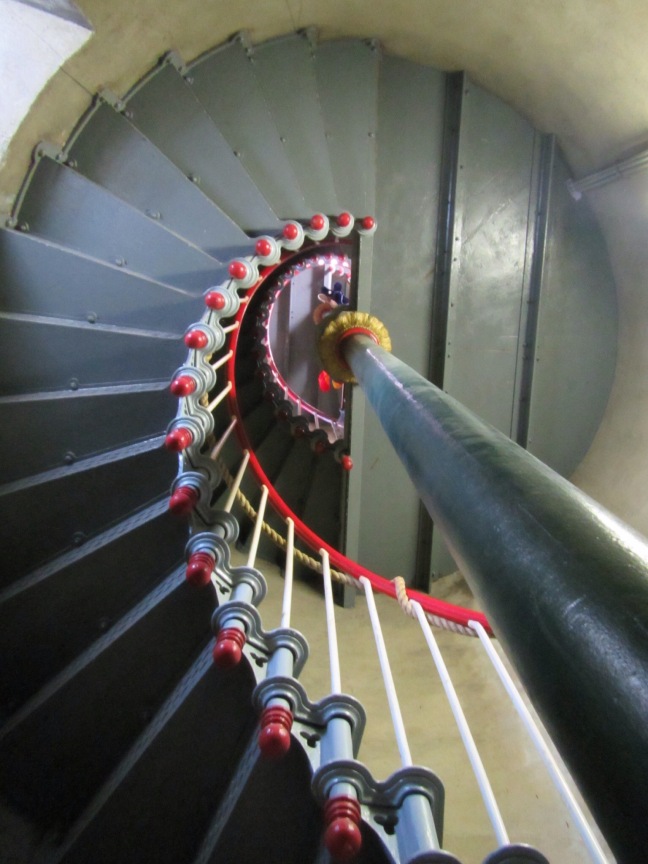 The view from the top was stunning – could see for miles, although the female tour guide assured me that the view wasn’t very good today. Looked out to sea in an attempt to spot a passing whale but the water was too rough to spot any definitive shape. Waved down to Jayne who was walking around the pathways taking photos. 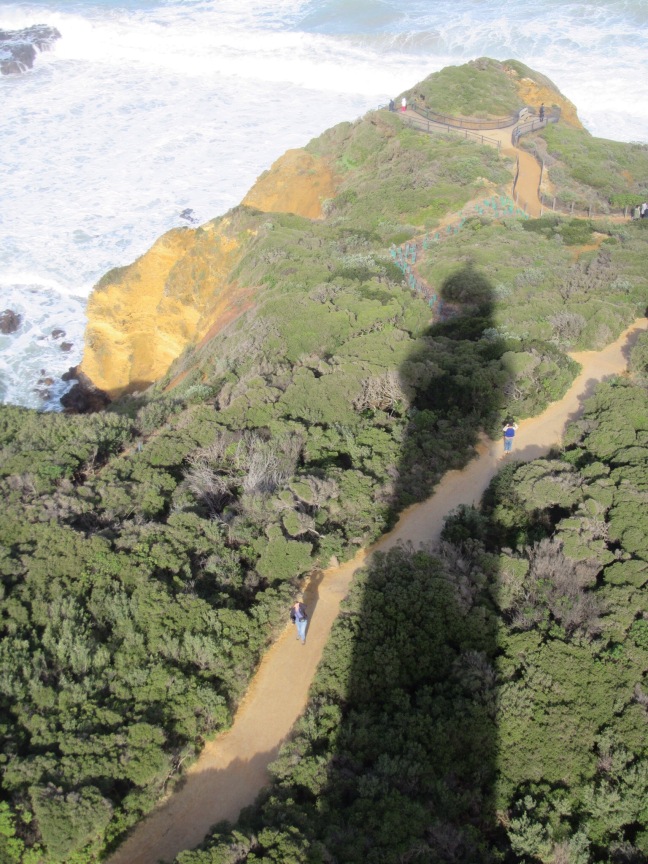 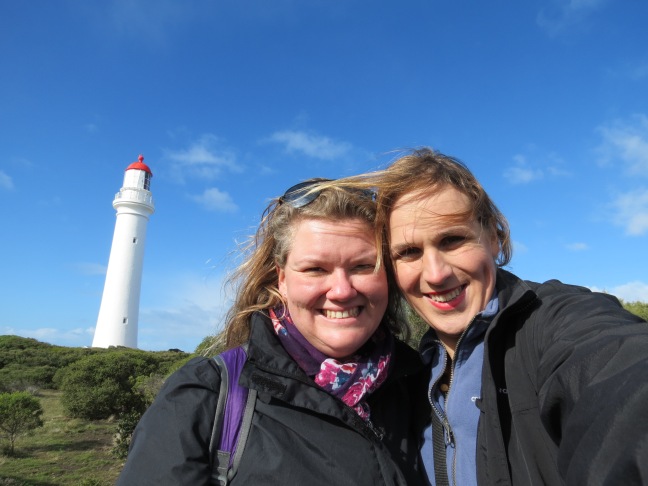 Back down at the bottom, we walked to various viewpoints nearby, looking at the cliff formation and admiring the volcanic rocks jutting out from the water. A walk along the beach exposed some caves in the cliff that the lighthouse guide said were safe to visit but the tide was still too high to go exploring. A quick mess around in the playground attached to the car park and we were back in the car and on the road again. 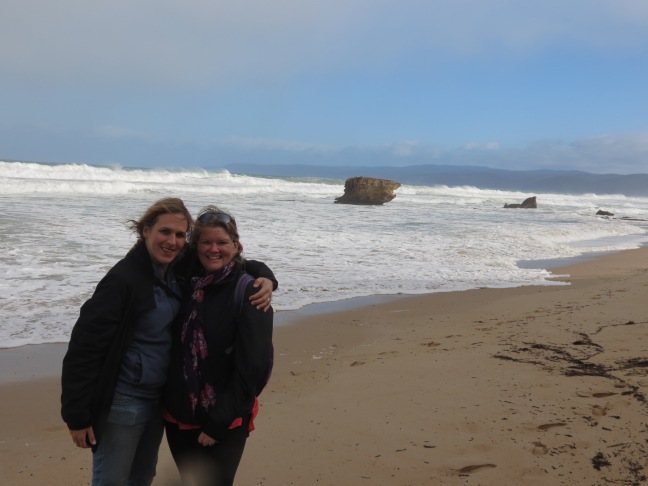 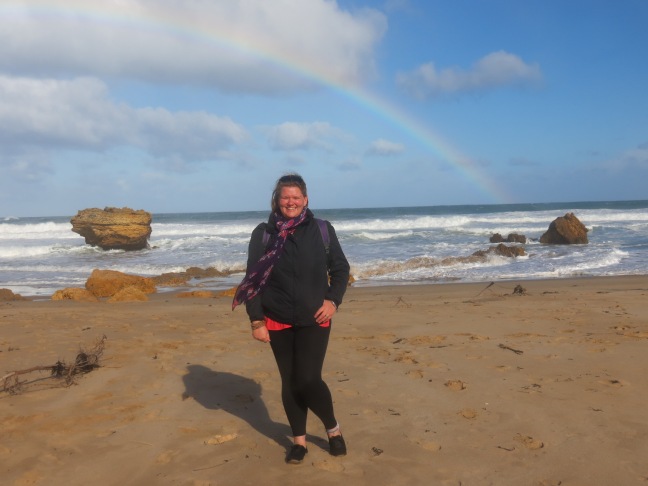 Had been told to head towards Erskine Falls as, not only was there a beautiful waterfall, there was a chance to see koala bears and they had also had snow yesterday which made the place even more magical. The windy road though the forest canopies revealed no koalas but we had plenty of snow – we even made a new friend… Augustus the Australian Aboriginal Snowman – the twin of Henry the Himalayan Snowman Sherpa from Nepal. 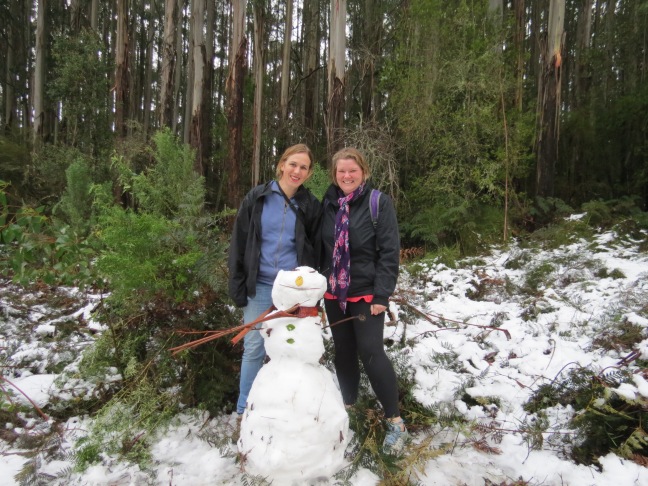 The road down to the falls were barricaded with signs saying ‘do not enter’ (which some people were ignoring). Decided that neither of us had decent enough shoes to navigate icy snowy paths that were already labelled as ‘dangerous’, so we got back in the car and continued on our way, still searching for koalas. Jayne got me to do a u-turn in the town of Kennett River as she saw ‘koalas’ flash up on her MapsMe app. 5 metres down a side road and we got out of the car and found four koalas hanging out in eucalyptus trees. They were so cute and fluffy, with gorgeous shiny black noses – I want one!! There was also an array of birds (cockatoos, king parrots, rosellas), clearly tame from tourists visiting the area as they perched on people’s heads if they stood still for too long… (e.g. longer than 2 seconds!). 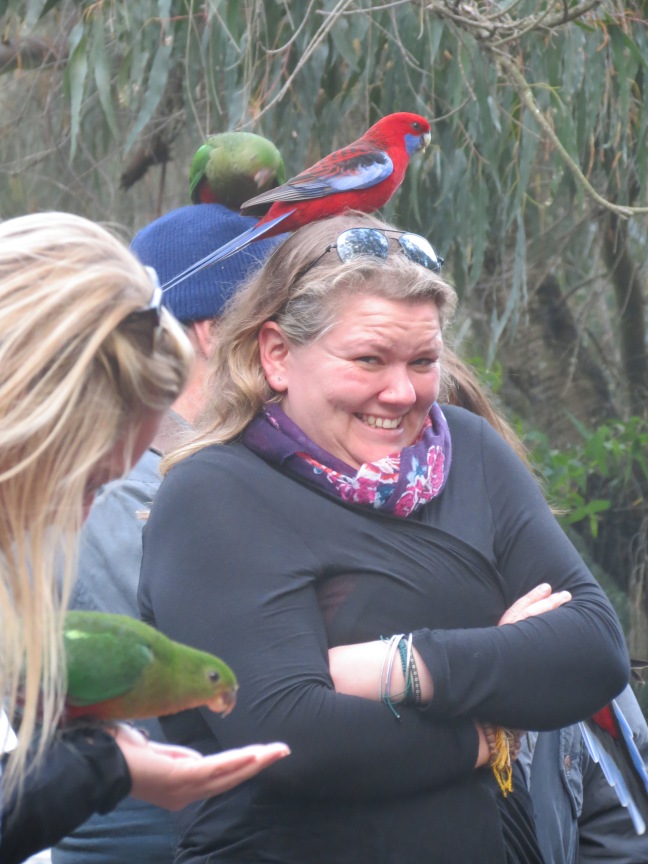 Drove the rest of the way to Apollo Bay and checked into our YHA hostel. Feels very weird knowing that we are going to be sharing a room with strangers after so long of being able to afford private rooms (thank you SE Asia for turning us into princesses!!!). Dropped the bags off in our dorm and headed over to the supermarket to buy supplies for dinner, breakfast and lunch tomorrow. I think it is going to be kind of nice popping into the shop everyday to get something for dinner, although we are going to have to be careful that we don’t use each supermarket shop as an excuse to impulse purchase useless items, especially whilst we have the car and don’t have to carry our backpacks much!! Jayne made a lovely Thai green chicken and vegetable curry for dinner which we ate chatting to a Chinese girl who had decided to stay at this hostel for a month for free in exchange for work. Sat in the lounge warming up and watching the wood fire then heading up to our dorm to watch a couple of episodes of Modern Family before climbing into our separate bunk beds.