Woke up relatively refreshed, despite being in a 10 bed dorm full of smelly boys (and us)!! Showered, dressed and went downstairs for breakfast, leaving one roommate still snoring away on his bed. A well needed vanilla latte (from a sachet – we’re on a strict budget!!) and supermarket pain au chocolate, which weren’t actually too bad, before heading back upstairs to the now empty dorm to pack up our bags and head over to the coach station. Having torn my new ripped jeans in one section a bit too much (can’t get used to putting them on and off!!), I set to work sewing up the additional and accidental hole with bright pink thread to make it stand out… At least that is my excuse for the random and slightly poor needlework skills – although, in my defence, it was cold and I was wearing the jeans at the time!!

The coach was quite quiet and relatively painless as we used and abused the free wifi and in-seat USB plug sockets to catch up on writing and uploading blogs as well as some FaceBook stalking and research for things to do in Sydney. Jayne was so fixated and determined on uploading photos that she did it all during lunch – precariously balancing iPhones and hotdogs as the coach speed along the road.
Arrived in Central Station Sydney after 3.5 hours and headed up to the information desk to find information and train times for our visit to the Blue Mountain region in a few days time. All sorted, with shiny Opal cards in our pockets (the Sydney version of Oyster cards for TfL) and we started making our way towards our hostel. 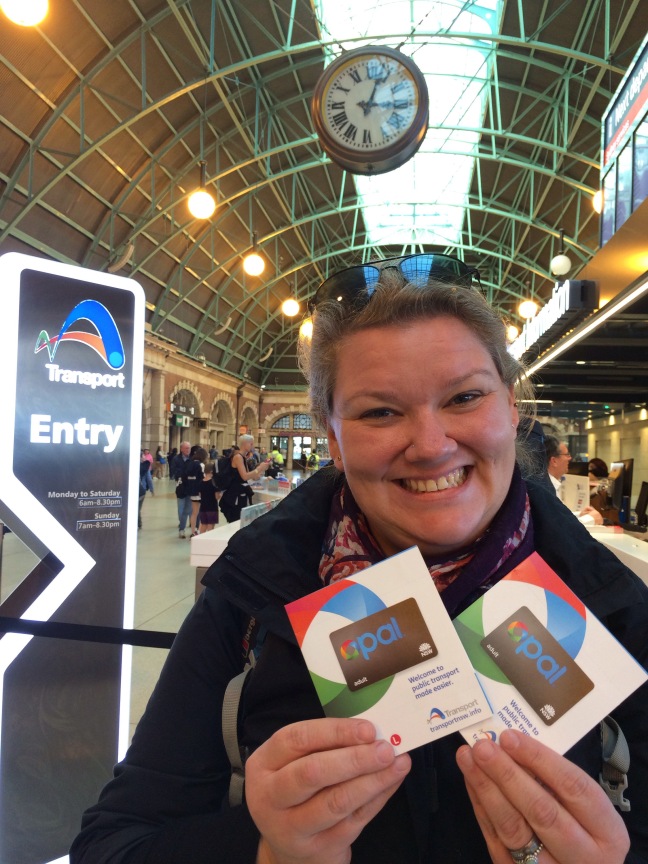 Decided to stretch our legs and walk the 3km to ‘The Rocks’, enjoying the weather and the views as we passed through the city. Walked past the beautiful Queen Victoria Building. Built in 1898, the Victorian building was repeatedly put up for demolition before it was restored in the mid-1980’s. It now occupies 200 speciality shops but it’s the wrought iron balconies, copper domes and stained glass windows that really make it stand out. Unfortunately, there were road works in front of the building so none of our photos really do it justice! 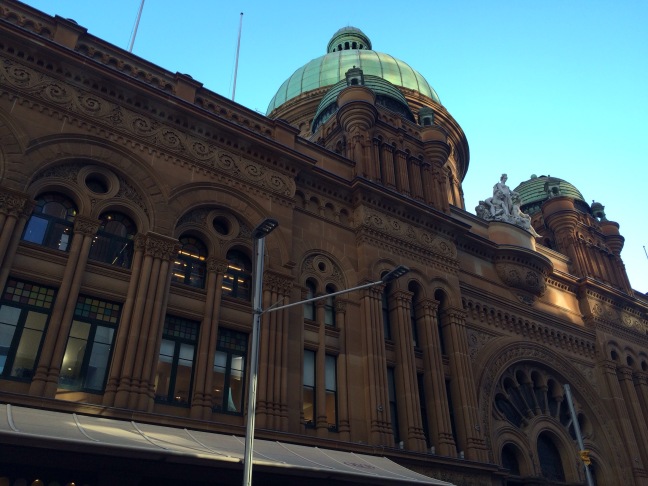 As we stood waiting to cross the road by the imposing statue of Queen Victoria, a little boys scooter rolled into the road. Several cars drove around it before a guy in a white van drove straight into it and dragged it off down the street to the astonishment and yells of the people waiting at the traffic lights. The mum of the little boy used it as a lesson to her son about not chasing his stuff out into the road…
Arrived at the Sydney Harbour YHA and checked in, the receptionist flabbergasted that we had walked from Central Station!! This hostel is an usual building as it is built on stilts above an archaeological site. In 1994, the remains of over 30 houses, two laneways, shops and pubs were excavated here along with over a million artefacts.

Dropping our bags off in the spacious dormitory (with private bathroom!) we headed up to the rooftop to see the million dollar view of Circular Quay and the Sydney Opera House (not too shabby based on the fact we are only paying $23 each per night!).

After a while of soaking up the view, we separated out to complete different jobs. Jayne headed out to find a supermarket to get some food and wine for dinner and I set about washing our clothes in the attached laundry. A couple of hours later, Cheryl turned up and the three of us had a fantastic evening catching up, swapping travel stories, drinking (too much) wine and eating dinner in the hostel. The evening passed too quickly and, before too long, we were walking Cheryl to the train station. 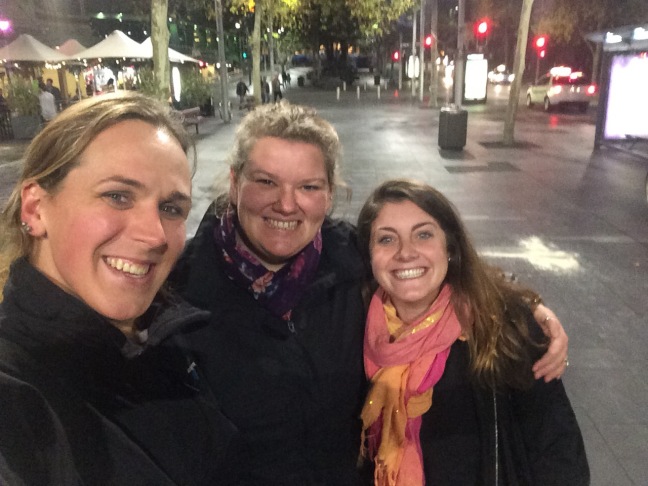 Got ourselves an ice cream as we walked back up to the hostel and chatted to our Canadian roommate before falling asleep.