Alexander Graham Bell said, “before anything else, preparation is the key to success”. Mr. Bell was a Scottish-born scientist, inventor, engineer and innovator who is credited with patenting the first practical telephone. It is kind of ironic that I type today’s blog on a modern telephone and the first thing we had prepared for the day was pack the bags the night before and thus we slipped quietly out of the room nice and early without waking anyone.

A 4km walk to Thrifty to collect our car, we were a bit out of sorts when the grumpy old man behind the desk said that we hadn’t booked a car but rather requested it. We were told basically to get lost for half an hour and hopefully the car they were collecting from the airport would be suitable. Oh and where are your passports? Having not needed them in Melbourne this chap was insistent that he wouldn’t accept just the driving licence and need more money from us as a deposit for international renters. Thus, wandered up and down the road to find a wifi signal to send photos of our passports to the office. Returned to a more amicable gentleman behind the counter and with a bit of cooperation and business sense we drove away with a cute little car heading to The Big Banana. Nothing more than a giant replica of a banana, it’s famous in Coffs Harbour and has made it in to the Big Things of Australia book. It’s probably the first banana that Katherine has liked in years.

Dorrigo National Park is one of the fifty separate reserves that comprises of 366,500 hectares in the NSW and QLD states. They are the most extensive area of subtropical rainforests in the world and you guessed it, a UNESCO World Heritage Site. Being listed as a WHS for three criteria: Major stages of Earth’s history; Significant ecological and biological processes; Significant natural habitat for biodiversity, the anticipation was building as we drove higher and higher in to the mountains with signs along the Waterfall Way for lookouts and waterfalls every few kilometres. We stopped at only one waterfall en route to the Dorrigo Rainforest Centre and for a simple donation of $2 each we were in.

The view from the Skywalk was breathtaking. An uninterrupted view of the mountains, covered in forests, rolling gently down to the valley and sea. We more interested in just the views than taking many photos, which should hopefully give some credence to how beautiful this place is. We wandered through the forest, sticking the pathway (as other tourists said they crossed paths with a large black and red-bellied snake) and just got lost in time. The waterfalls were incredible. The less visited, further away fall was captivating and we wished we could have it as a garden feature. It was totally different to the cascading fall in to the pool that had so many tourists and incredibly serene and peaceful. 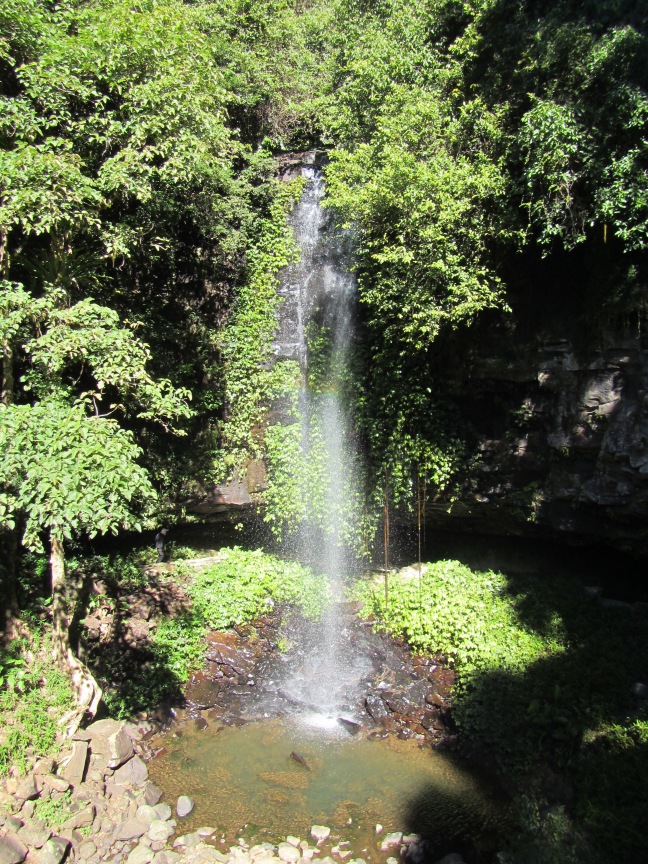 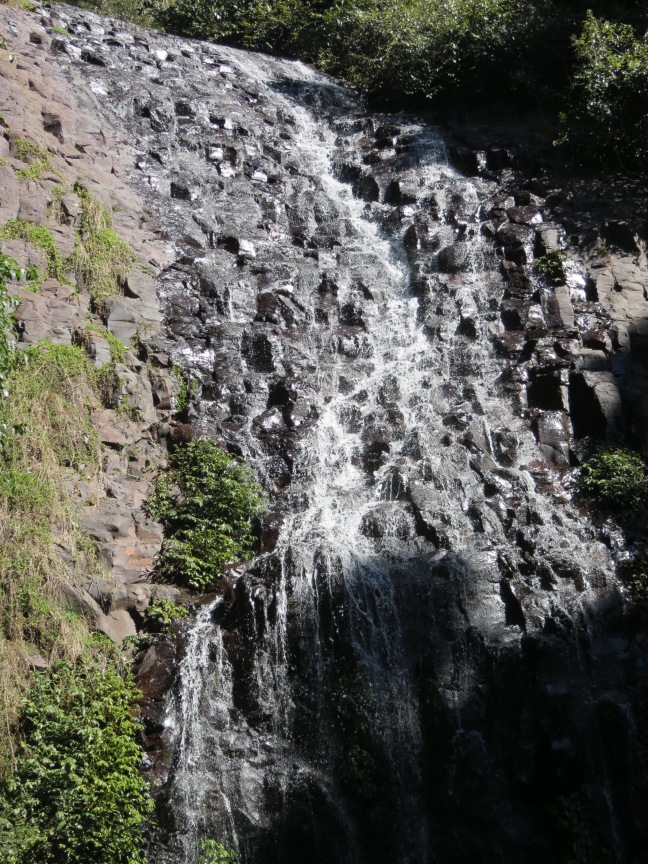 The walk back, a circuit of 6.6km went through denser forest areas. We saw a number of mature tallow wood trees, some of them slowly being encapsulated by the strangler fig. The webbing of the fig roots across the trunk of the host tree was akin to a sugar nest desert or for the film buffs, the scene in spider-man where he’s trying to to rip the venom costume from his body.

It was almost to the end of the trail when we finally spied the Eastern Whipbird – a small blackish teal bird with a white head, it can’t be confused for anything else because of its call. A long piercing whistle, the retired gent on the skywalk earlier said they are called the Star Wars bird because the sound is like a blaster cannon with the female response (not always after the male) sounding like two small blaster shots. I must have been a bit annoying towards the end of the walk with me doing the two blaster whistles after every male call. Still, it brought life to the timeless forest and the brush turkeys that wandered about were boring in comparison.

We had lunch up at the Glade. Unable and unwilling to take the rental on the unsealed road up to Never Never picnic lookout, we had a spot of sunshine and tranquility before visiting Dangar Falls. A total wow moment, not expecting the sheer size or quality of this site, we could easily have missed this spectacle if we had driven out of our way for lunch. The lads down at the bottom of the creek swimming must have been bonkers, for up on the cliff looking down at the waterfall and pool it looked freezing cold. 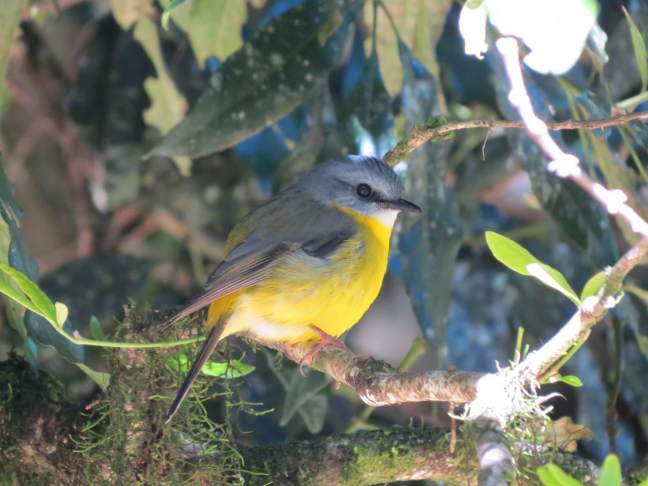 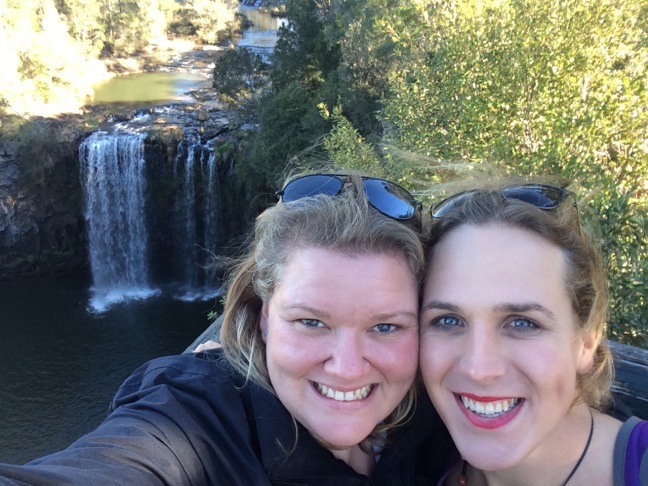 We stopped to feed some horses some apples on the way to another lookout and this stop would later come back to bite us in the ass. We went to Griffiths Lookout, again another jaw-dropping panoramic view of the rainforests. We sat in silence before we mutually agreed without saying anything that we needed to head off. This was also the start of the massive allergic reaction that Katherine was having. Tears streaming down the face, sniffles that would put one of the dwarves to shame and eyes swelling up to match a puffer fish. We stopped in Bellingen for antihistamine eye drops and chocolate. Apparently chocolate, in particular Mint Oreo, is very important in the healing process. 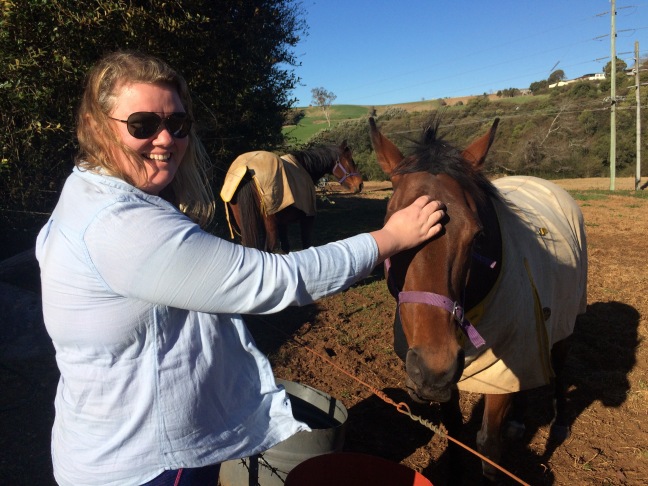 We detoured to the same lookout we were taken to the night before. The sky was clear, the hills having a beautiful orange glow on their crest and the sea behind was casting calm waves upon the shore. The canoeists had no idea that just behind the breakwater of the harbour a humpback was swimming past. Too slow to drive down to a proper vantage point to find the whale a bit closer at least I got an image to prove that we had seen whales for a third day in a row. It was another fab day and when dinner was finished we passed out, some of us a bit louder than others in the dorm.