Woke up in our very strange dorm room that had the fire exit sign shining brightly like a lighthouse beacon all throughout the night. So much so, that on three occasions during the night I woke up in a panic thinking it was daylight outside and we were late for our bus transfer to the ferry port. Fortunately (or unfortunately, since I didn’t have a proper nights sleep) we were fine and got up just before our alarms went off to go shower and get dressed. Rather than disturbing our roommates, we packed up our bags outside on a picnic bench by the pond with ducks making a hell of a racket around us! With all our bags reorganised ready for our trip to Fraser Island, we headed to the kitchen to have some breakfast of left over chocolate cake and a coffee (so healthy!!). Checked out and, as I was waited for our bus to turn up, Jayne chatted away to Tiffany in the YHA reception and our travels. Jayne says it was nice to talk to a receptionist who was clearly interested in what we were doing rather than feigning an interest. Our transfer bus turned up and the driver, Jon, had to go on a walk about to try and find two other passengers who hadn’t turned up… Apparently they had done the same on Friday! Clearly a bit pissed off, he called head office to let them know and then we were on our way. As the only two on the massive bus, we could have spread out but Jayne decided to sit right next to me… Got us slightly hoping that we might be the only two on the tour of Fraser Island but no such luck – the others were being picked up in a different bus. We were just too far over the other end of town to make it feasible to pick us up with the others! Went for a little drive around town with Jon pointing out various things to us and driving past the town marina to see if there were any last minute passengers to collect (there weren’t!). Drove out of town to the Kingfisher main office where we were given our boarding passes for the ferry and had to store our luggage in a container that would be brought over later on a quieter mid-day ferry. Sat on a bench, admiring the absolutely stunning view of the bay whilst we chatted to other guests (who were going on a different tour) and drinking iced coffee.

We then all got on a different bus and headed down to the private marina to board the Kingfisher Bay Resort boat. It was at this point that a woman stepped in front of us carrying a baby to which Jayne said, in a hideous Aussie accent, ‘a dingo ate my baby’… Fortunately the woman was from New Zealand and thought it was funny, even saying that she wants to keep saying it herself but doesn’t want to tempt fate! Jayne still got a disapproving teachers look from me! 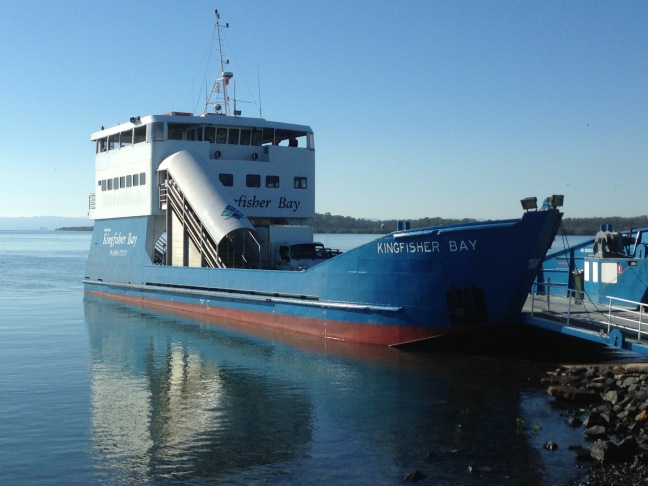 We spent the 45 minute ferry crossing looking for wildlife. I was under strict instructions form Jayne to keep my eyes open for dugongs, humpbacks and dolphins that can all be spotted in this stretch of water. We did get to see a turtle that seemed to be flailing around in the water a bit. The skipper (Captain Warren) was confident enough to sail the boat extremely close to the shore so we got to get our first glimpses of our 49th UNESCO site.

Arriving at the Kingfisher Bay Resort dock we met out tour leader, Hayden, and were asked to wait in the jetty bar so he could double check numbers and dietary requirements before we headed out in the bright yellow 4×4 bus. As the largest sand island in the world, there are no paved roads outside of the resort. You are basically being driven around, up and down, sand dunes in a bus. It is essentially the worlds bumpiest theme park ride – which mean that seat belts are compulsory but they do jam up every time you hit a bump which effectively strangles you!! Coming out of the resort, the first road we encountered was called ‘Rollercoaster Road’. Imagine going down a water slide that is made out of sand in a bus and you’ll kind of understand what it was like… Don’t think I’ve ever simultaneously bumped every part of my body against bus seats, windows and Jayne before! As we descended the Rollercoaster road, Hayden played a song over the speaker system that basically announced that ‘we all have to die one day’… Great way to break the ice!!

Continued our bumpy drive across Fraser Island, along the well worn in tyre tracks that had been etched in to the ‘road’ that was surrounded by forest on either side, not wide enough for two vehicles so there was a lot of huffing and puffing when we came across a car coming in the other direction – especially since 9 times out of 10, it was us that had to reverse! It took us about 45 minutes to get to our first stop of the day – Lake McKenzie.

Lake McKenzie is probably the most visited natural site on the island. It is a ‘perched’ lake, which means it contains only rainwater, no groundwater, is not fed by streams and does not flow to the ocean. The sand and organic matter at the base of the lake form an impervious layer, preventing rainwater from draining away. The sand here is pure, white silica and is not only beautiful to look at but feels beautifully soft to walk on. The sand acts as a filter, giving the water its clarity and helping to make the water so pure it can support very little life. Deciding to test that theory, we went for a swim – the water was freezing!! But, in for a penny in for a pound, as we were already in our swimming costumes and ankle deep in the water, we decided to fully submerge ourselves. Jayne went for a snorkel, looking through the crystal clear waters at small fishes and the lake vegetation. Not wanting to get my head wet, I swam breaststroke to the island in the middle and waited for Jayne to come over. A slightly scary moment where the lake goes from clear blue to very dark where you can only hope that there are no biting creatures lurking beneath the waves! 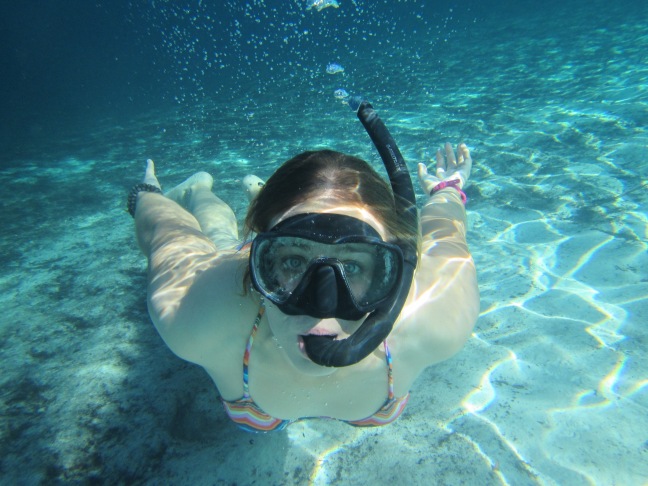 Deciding that we didn’t want to stay in the water much longer, we headed back to the shore and sat near the water getting dry and warm in the sun. Walked back up to the bus at 12.30 to have lunch. A help yourself buffet of make-your-own sandwiches where we had a constant stream of birds waiting for any bits that might get dropped, including a Kookaburra who stole a piece of cheese straight off a lady’s plate! It was the land monitor lizard that got most people’s attention as it inched further and further forward… 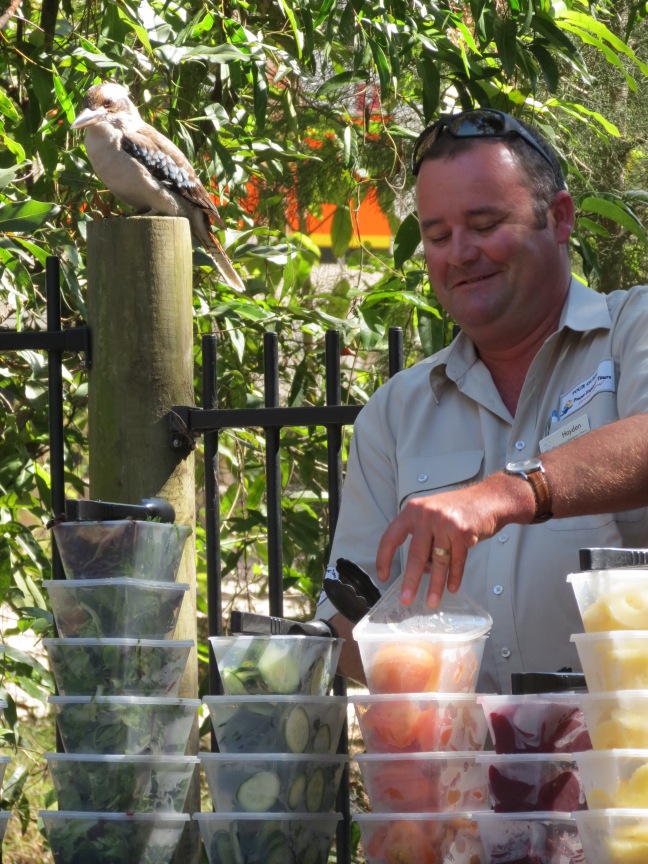 Back on bus, we were headed into the forest to begin the first of our two walks of the day. As we were driving/bouncing along the road, Jayne spotted an echidna snuffling around in the trees – much to her delight as she has been desperate to see one. Our first walk was 2.6km through the forest stopping off at Basin Lake before we got started.

Basin Lake is a window lake which is created by a natural depression or valley in the sand exposing the water table or aquifer below. These are as the name suggests – windows into the aquifer or water table. Although les famous than Lake McKenzie, it was incredibly beautiful and, shamefully, deserted.

The walk through the forest was lovely. We got to spend time looking at the different varieties of flora and keeping our eyes out for any animals. Chatted mostly to a couple called Dave and Em, who seem to be on a similar trip to ours – they have visited many of the same places! Whilst comparing notes, I was spending more time looking at my feet as I was worried about tripping up on one of the hundreds of tree roots that were littering the path.

Arriving in Central Station, which originally was established as a forestry camp when there was logging on Fraser Island. Central Station’s rainforest area houses a display explaining the development of the island and its various flora and fauna with a wealth of information on display. Central Station has a short boardwalk around Wanggoolba Creek and through the Fraser Island rainforest, where we walked down another track to begin the 1.8km rainforest walk. Fraser Island is the only place in the world to have a subtropical rainforest growing in sand. Imagine towering pines, rainforest trees with three metre girths, rare and ancient giant ferns, eucalypt forests with their characteristic pendulous leaves, lemon-scented swamp vegetation and dwarfed heathland shrubs covered in a profusion of flowers. Now imagine them all growing on an island of sand. It was actually really interesting to see the contrast in the rainforest compared to the forest, which are meters apart. We were able to fill our water bottles straight from the creek as the water is so pure, having been filtered through layers upon layers of sand for almost 80 years before it surfaced in the creek. 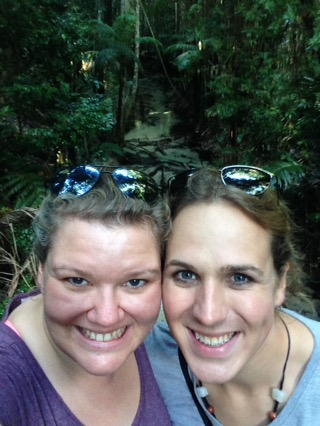 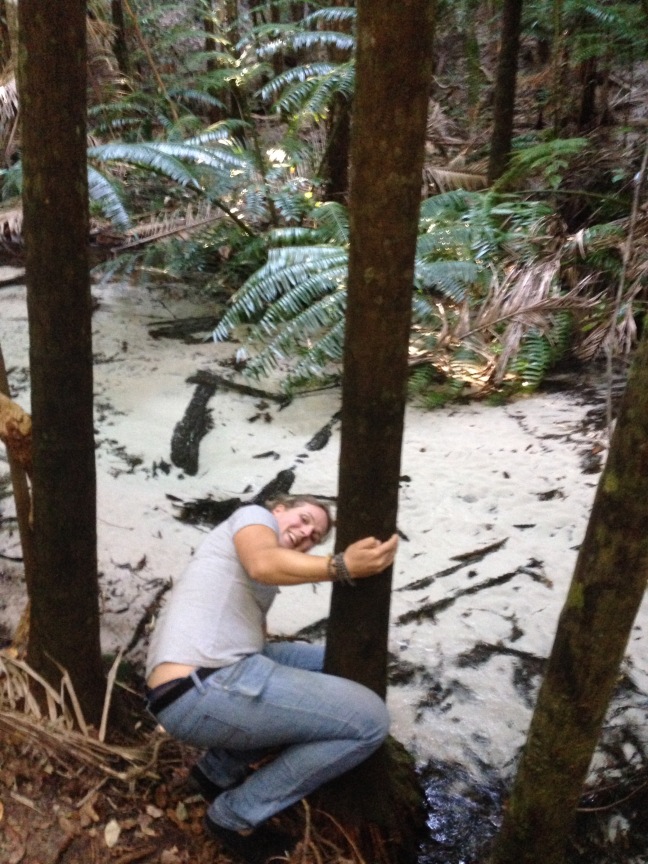 As the others in the group powered on ahead through the forest, we lagged behind being absolutely fascinated and taken aback by the subtropical vegetation growing so prevenetly in the sand. At the end of the walk, the bus had opened up its sides to give us homemade biscuits, tea and coffee. Jayne and I found a log away from the group just to enjoy being in the environment.

A bumpy drive back to the resort and we got some free time to either walk down the beach, go to the bar or walk to the end of the jetty. We chose the latter option, sitting at the end of the dock watching the ferry sail away, the fisherman trying to catch something and the sun set. Absolutely stunning and a beautiful end to the day! 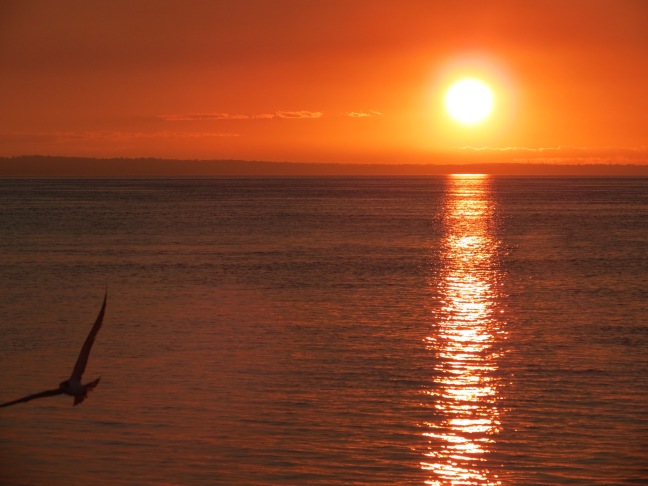 Back on the bus to be driven up ‘Heart Attack Hill’ – the steep incline which houses the cheap backpacker accommodation at the top of the 1km hill. We had been assigned 4-bed dorm rooms in buildings with 5 rooms each yet no one on our tour was in our room… As I went to retrieve our bags, Jayne went to the room and met Emma – a teacher from Bristol who starts her tour tomorrow. We opened up the goon bag of white wine that we had bought with us and got to know each other better. Chatting to her, it was like I had found a carbon copy of myself… Except she has never read a Harry Potter book!! Finally being able to get over this and move on (😳), we headed over to ‘The Dingo bar’ where we had burgers, wedges and salad for dinner, chatting away to Emma about our respective adventures with a pitcher of cocktail. Not entirely sure how it happened but we ended up playing Beer Pong… 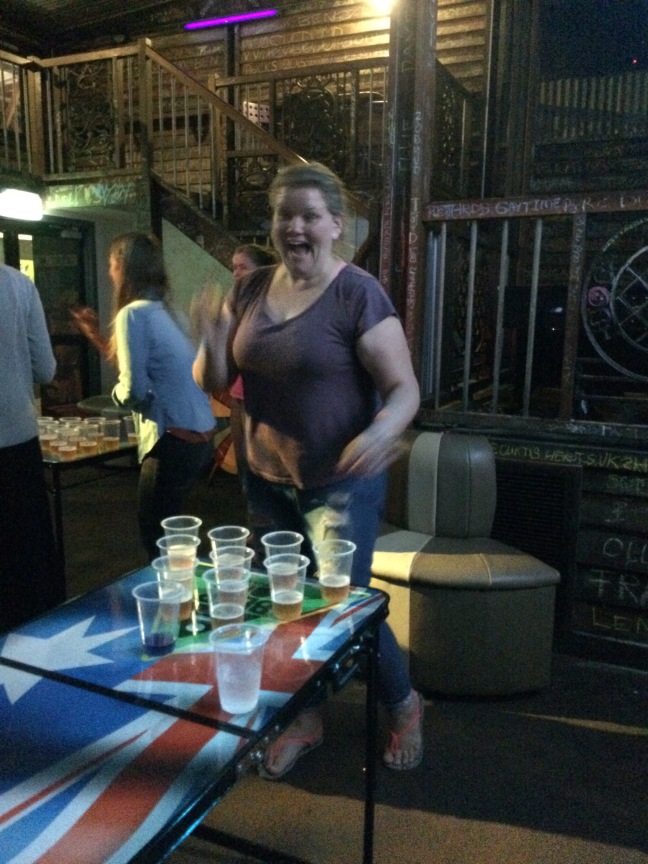 We played it with the roughest tasting beer ever – to the point that we kept having to swap people in as the drink kept making us feel gassy and sick. Unfortunately, after the game was won, it was Jayne who was chucking up her dinner in the bar toilets so we headed back to the lodge and went to bed!