The alarms went off at 6am and we both dragged ourselves out of bed to go and have a shower. I was feeling particularly worse for wear, having drunk far too much pink cocktail and eaten far too much roast pork the night before. Getting dressed quietly, Emma, Jayne and I headed down to the bar area for breakfast. I managed to pick my way through a tiny amount of scrambled egg and a piece of dried fruit toast – what my body was really craving was a fresh fruit salad – as Jayne hoovered up a full fry up! Emma’s tour left at 7.30am so we said goodbye to her, telling some more jokes about drop bears and making the tales so ludicrous that we were sure she would realise we were joking… I’m not so sure she did. Went back to the lodge to brush our teeth and put our rucksacks in the luggage store before boarding our own bus for the last day on Fraser Island. One of the French guys wanted to play his music over the speaker system – it was possibly the most painful music we have ever had exposed to our eardrums. The grumbles from everyone on the bus was apparent as the music droned on for over 30 minutes until Hayden asked if anyone had a problem with his music, P!nk and Eminem, anymore?!? The drive along the roads brought us to Lake Birrabeen. This lake is very similar to and just as beautiful as Lake McKenzie, but with significantly less tourists, which meant that our view was uninterrupted. It is another example of a perched lake, which means it has been formed on an impermeable layer of leaf litter and detritus and is self-contained, not fed by rivers or flowing to the sea. Despite this the water is super clean because the organic colloids are filtered out by the sand. 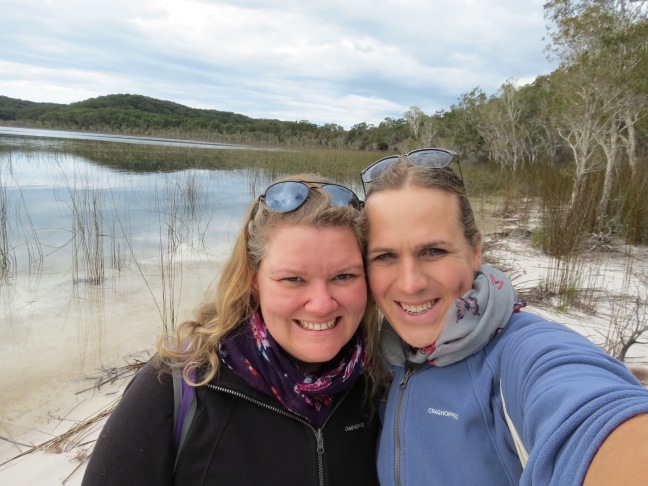 As it was slightly overcast with a chill in the air, there was no way that Jayne and I were going to go swimming so we went for a walk along the lake shore, as far as we could go until we were cut off by the mangroves and then we turned around and walked as far as possible in the opposite direction. The others were sunbathing and trying the stand up paddle boarding – I did want to have a go but with everyone watching (and willing) people to fall in, I wasn’t prepared to make a fool of myself and attempt to have a go. As we walked, we found some purple claws from a freshwater crayfish, a raptor bird of prey in the trees, a worm mimicking a bit of stick and red flowering plants that resembled a type of Venus fly trap. Having walked as far as possible, including and area of reeds that just scared me a little too much and made me think I was going to stumble across a den of dingos, we found a tree root to sit on and enjoyed the view of the lake and watch the others mess around in the water. 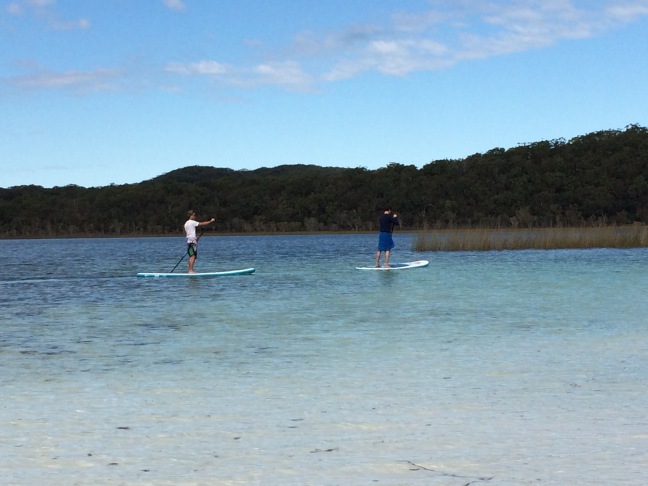 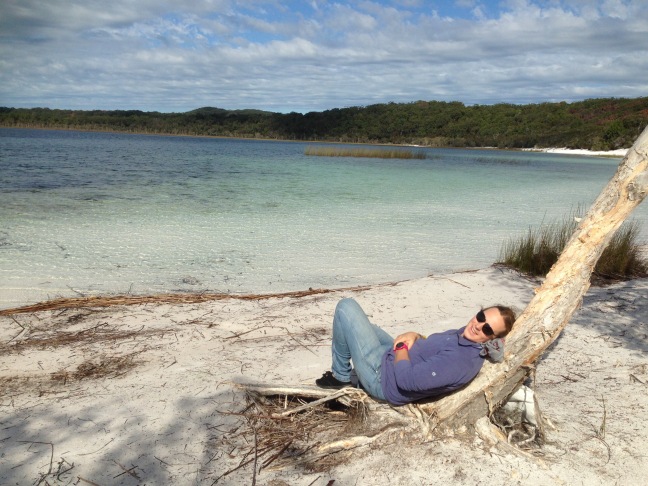 About 10 minutes before we had to be back on the bus, a couple of French girls stood behind us chatting. Couldn’t work out why they had decided to stay so close to us, bearing in mind that the entire beach was almost deserted. However, as we got up to head back to the bus they quickly jumped onto the tree roots – they had been waiting for our spot! Back on the bus, we headed to the nearby Eurong resort for an early lunch, apparently to give us more time at Lake Wabby. Still feeling a bit rough from last night and both still full from this morning, we both just picked at our all-you-can-eat lunch buffets (a clear tactical move on their part!!!). We did grab an ice cream while we waited for our final trip around the island, walking to the beach to see if we could spot any humpback whales but no such luck. Our last stop on our Fraser Island tour was Lake Wabby, which is also termed a barrage lake and is formed by the damming action of a sandblow blocking the waters on a natural spring. Lake Wabby is relatively close to the ocean side of the island and unlike the other lakes it supports several varieties of fish. It is also a good example of the sandblow phenomena, gradually encroaching on the deep green waters of Lake Wabby as the sandblow makes its gradual progress westward across the island.

It was a 2.8km walking trail leading through a sand dune forest to Lake Wabby. During the walk, Hayden, Jayne and I told jokes, most of them dirty ones, with Hayden being the master of sick humour. After walking for about 30 minutes, we came out of the forest and onto a massive sand dune. Hayden acted all shocked and pretended that the lake had dried up – much to the annoyance of the French couple, who looked like they were close to having a toddler like tantrum. Just round the corner of the sand dune was the lake which is surrounded on three sides by eucalyptus forest and the fourth side is a massive sandblow that encroaches on the lake at a rate of about 3 meters a year. The lake is thought to disappear by the end of this century. 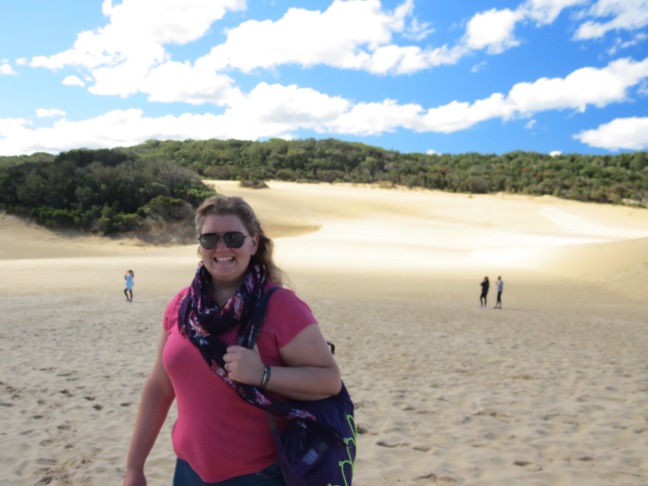 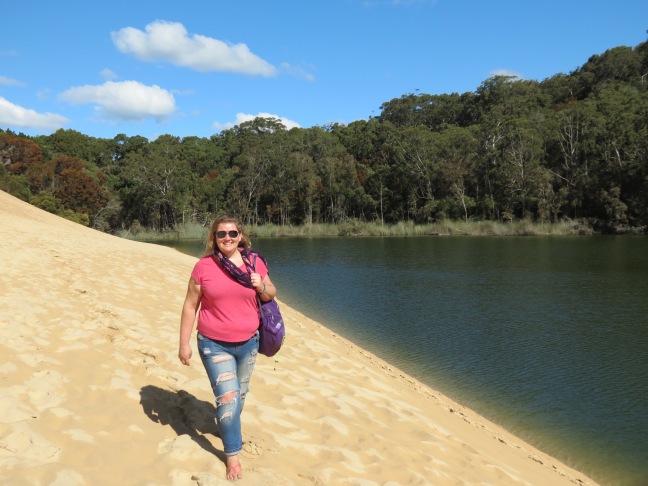 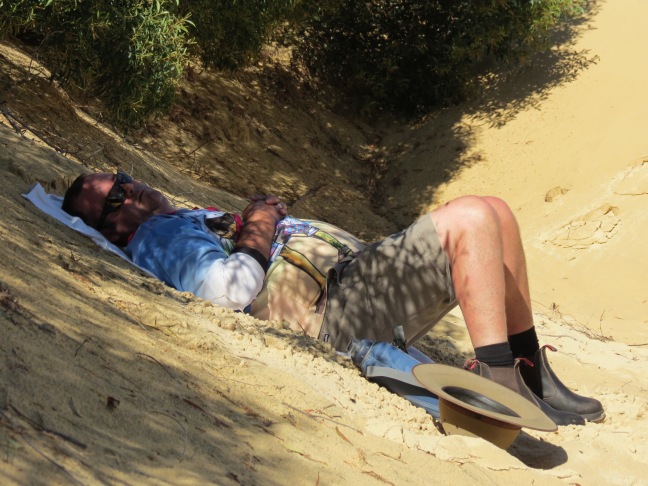 Jayne and I decided to sit in the shade to enjoy the relative tranquility of the area whilst the others went swimming and sunbathing. We saw a couple of eagles fly over the lake, making a duck quake loudly as they tried to steal the fish it had just caught. We must have spent about 40 minutes relaxing at the lake before going back through the sand dune forest to the bus. 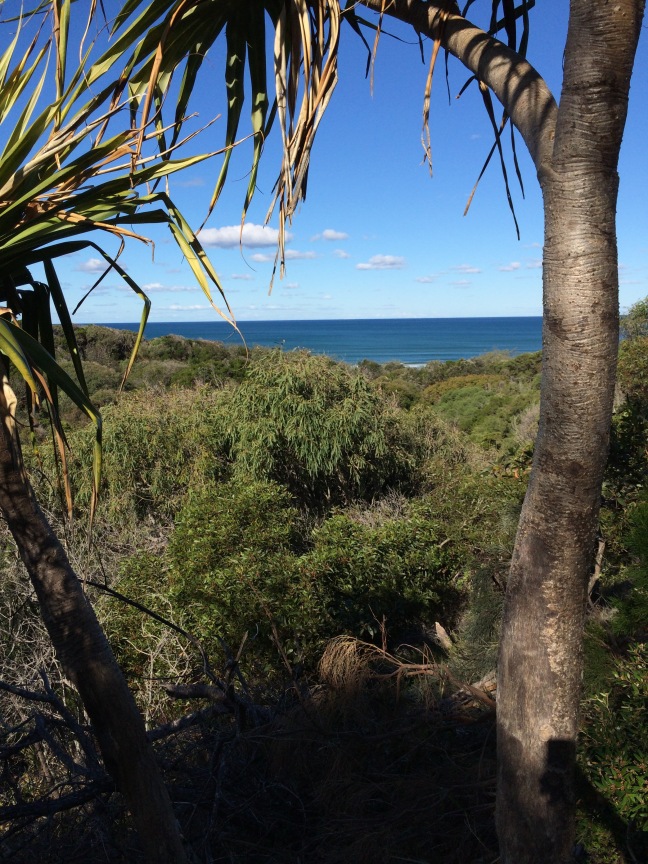 We dropped some people off at the bus stop on the east side of the island as they were getting the bus back to the Rainbow Beach as we continued over the west side on our last bumpy ride through the island – and Hayden made it extra bumpy!!! Something about turning off the back wheel lock so that the wheels turned and spun however they wanted… Whatever he did, it was brilliant!!! Back at the dock, we had time for a last quick walk along the beach. The tide was out so we were able to walk under the pier and out quite far, looking at the different patterns in the sand. 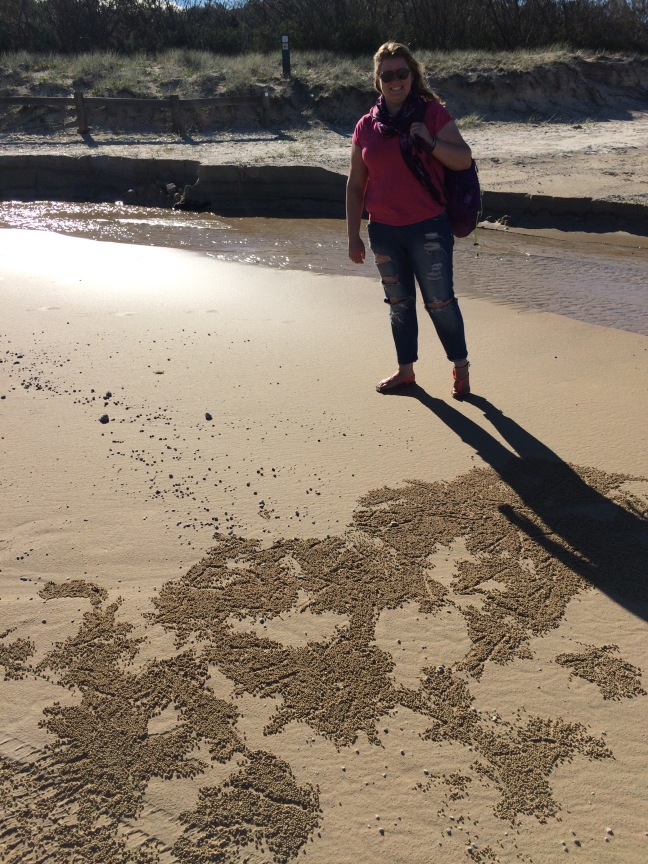 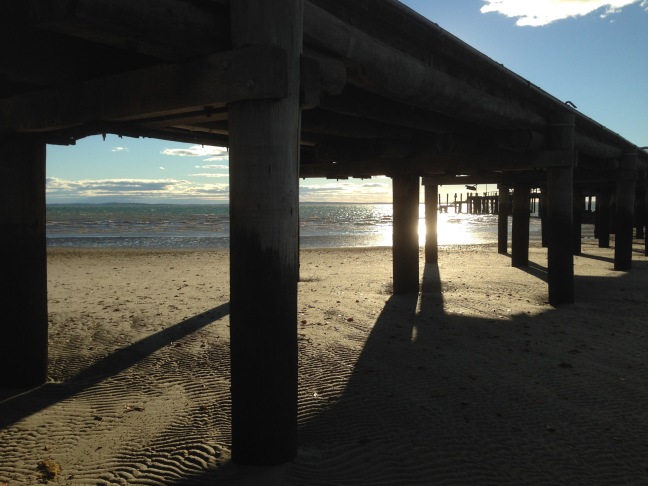 We got back on the ferry and there was no space in the downstairs cabin (which is fully enclosed) so we had to head up to the top cabin and spend the entire journey in the cold breeze. Utilised our time by looking for wildlife and wrapping scarves around our ears to keep the wind out. Arriving on the other side, we all got loaded into a bus that dropped us off at various locations in Hervey Bay. We were the last, getting dropped off at the coach terminal. We walked over to Hungry Jacks (Australian Burger King) for dinner and to use their wifi to download our coach tickets and to check emails etc before climbing aboard our night bus to Airlie Beach.