The effects of the last few nights of late nights and heavy drinking became apparent on the night bus – we both slept so well, comparatively to any other time we have tried to sleep on a night bus!! Woke up a couple of times during the night, mainly when the driver stopped for his compulsory break or when the long distance transistor radio crackled with jokes between truck drivers. At our 7am break stop, I jumped off the coach to get us some coffees, managing to find massive bottles of iced coffee for the same price as small ones – we were so buzzed for the rest of the journey!! Arrived in Airlie Beach just before 10am and made our way from the coach/yacht terminal to ABC Travel shop to pay the remainder of our cruise around the Whitsundays. The list of rules about about could and couldn’t be brought on to the yacht was comprehensive, including red wine and bags with zips (due to bed bugs?!?). So we sat in the travel agents along with several others re-arranging our bags into shopping, duffle and tote bags that had no zips. All organised (and slightly stressed!), we crossed the road and spent some time chilling out in the shade by the side of the lawn surrounded swimming lagoon. 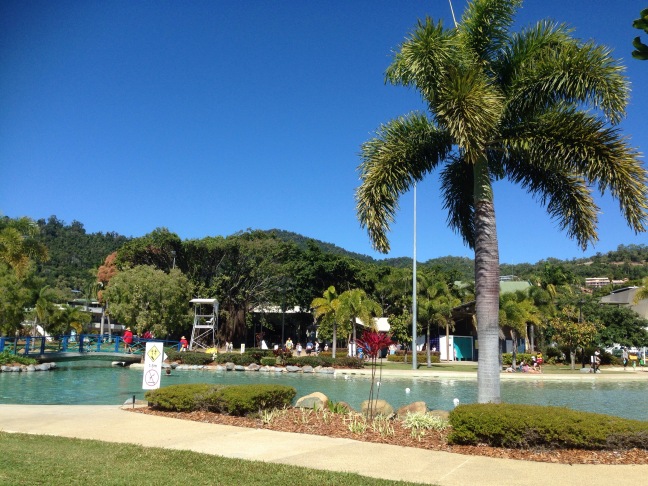 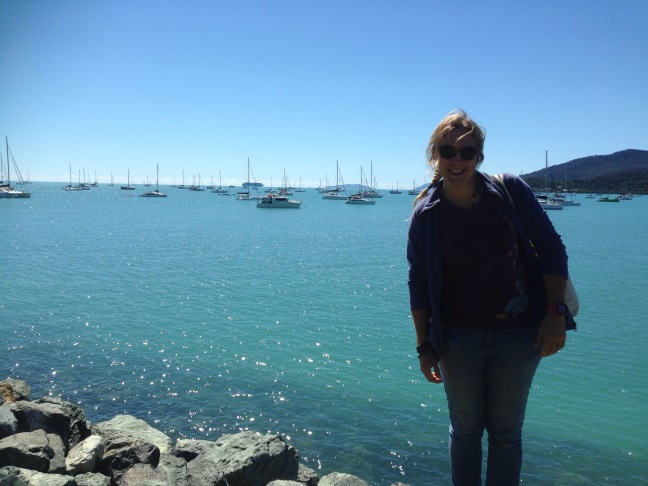 Was great to see so many people, locals and tourists using the lagoon – you could tell the difference by the attire and amount of sunblock used!! chatting for ages and generally people watching, an hour or so passed by quickly so we got up and headed to the local pharmacy to pick up some ear drops as a precaution for my ears that were definitely going to suffer with being in sea water for three days in a row. I wasn’t allowed to buy my usual drops over the counter as I didn’t have a prescription (and I wasn’t prepared to visit a doctor to get one) so I bought their homemade versions with tea tree oil and anti-inflammatories. Fingers crossed it keeps any infection at bay!! We then quickly used and abused the free wifi outside of McDonald’s (along with several other tourists) before I treated myself to a new sundress and we got some lunch bits in Woolworths. We walked back to the lagoon to have some lunch, using the picnic tables and shooing away seagulls that came too close.

After lunch, we began walking to the second town marina to catch our yacht out to the Whitsunday Islands. Surrounded by very young people all holding shopping bags full of alcohol (and not much else!!), we both began to feel very old… Waiting for the staff to turn up we listened to various stories of people’s travels/drinking games around Australia, embarrassed to share our culture tour of UNESCO treasure hunting with them. Having given the staff a couple of dollars each to buy ice for our drinks (Jayne and I sharing a half full goon bag whilst everyone else had a full one each), we made our way to the yacht and climbed onboard.

Turns out that the other yacht that usually sails is out of action hence the high number of people on our yacht for this cruise. Think I overhead one of the crew say 33… It felt crowded!! We all sat upfront for the usual safety briefing, including where we were and weren’t allowed to go and what to do if someone fell over board. After that we were allocated our rooms. Fortunately, we were placed in section C which means we only had 6 other girls with us – sections A and B had up to 16 people in them! The other bonus is that where our double bed is positioned, there is no one above us and we have the only plug socket!! With the party in full swing on the bow of the boat, we opted to sit inside the cabin and play some cards. Managed to get half way through a game of ‘Backpacker’ before the crew asked us to teach them. Removing the trickier cards from the pack, we taught Bex, Eileen and Evan the simple version first. It soon became competitive and, had we had longer, we would have reintroduced the harder cards and all ganged up on Evan!! As the crew went back to sailing and getting dinner ready, we sat out at the stern of the boat, enjoying the scenery and the gentle rocking of the boat.

We ate dinner of fish with mashed potato and coleslaw at the back of the boat with a glass of wine accompanied by Alex and Vanessa (the other older couple of the boat) as the party got into full swing up front. Watched the sun set and decided to get an early night, especially after the night bus and Bex saying that they wake everyone up at 6.30am in the morning… 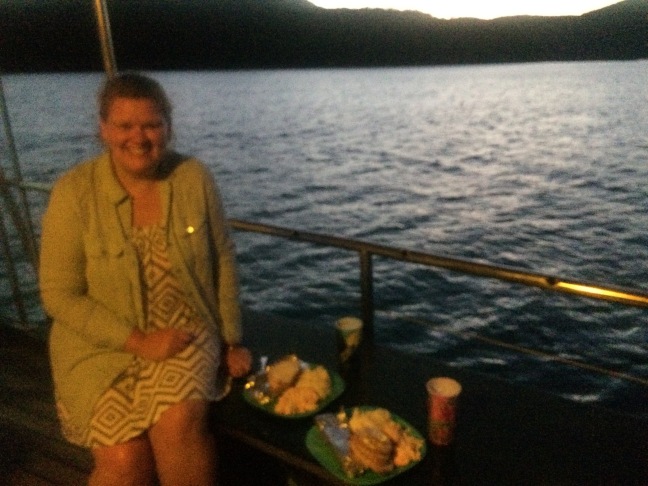