Having done our research late last night after completing the census, we knew we needed to catch a shuttle bus at 8.30am. Getting up early, showering, eating our free pancake breakfast we headed over to the bus station. After a quick dash to Coles to grab some apples to go with lunch, we waited for our bus. Watched the Kuranda scenic railway train leave from the stations as the bus pulled up. Only to find out that it didn’t drop off passengers off at our stop – it only picked them up! After a conversation with the driver, we found out that we could catch a bus from just outside our hostel. Retracing our steps, we managed to catch a bus to the Smithfield Skyrail. Felt like it was the longest bus journey in the entire world as it went around the houses and up every little back alley possible. It took us over an hour to go the 15km to the Skyrail rainforest Cableway. At 7.5km long, it is one of the worlds longest gondola cableway, giving a birds-eye view over the tropical rainforest and our 51st UNESCO World Heritage Site.

Finally arriving at the ticket counter, we organised our tickets to catch the cableway up and the train back down to Cairns. Only to find that my card didn’t work… Slightly strange as I had topped it up last night, we grabbed a purchase number and stepped out of the queue to allow others to be served whilst we tried to sort it out. The free wifi in the centre wasn’t working so I turned on data roaming to check accounts. With no reason for it not to work, other than a technical fault with the bank, I transferred some money into Jayne’s account and we kept our fingers crossed that her card would work. Fortunately it did, but it was a rather stressful 15 minutes! Fortunately, there was no wait for us to get into a gondola and we were above the rainforest before we knew it. 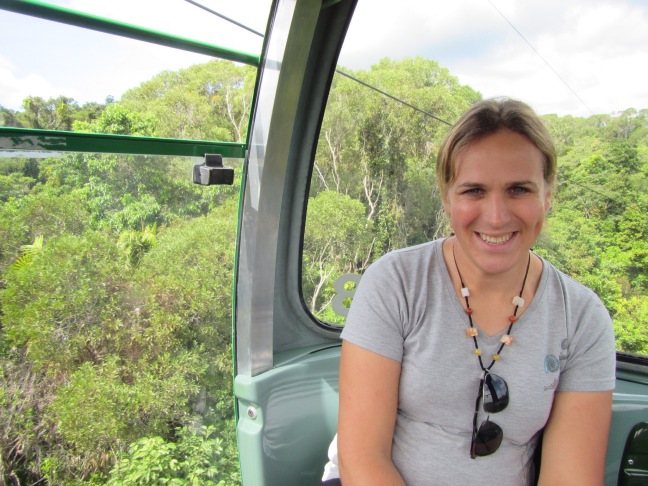 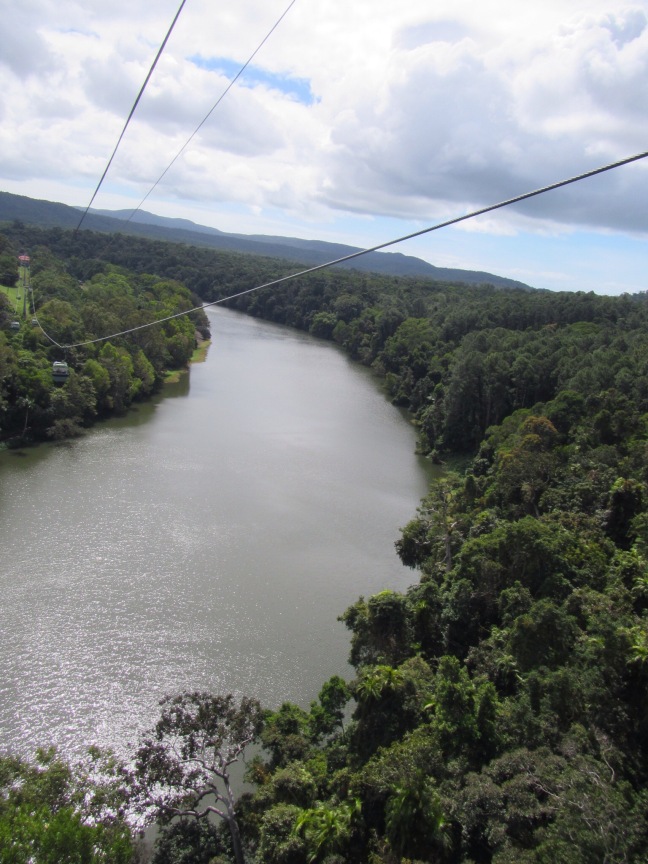 The Barron Gorge National park is stunning. Spread almost as far as the eye can see, there are towering tall green trees with an occasional glimpse of the road that runs through the rainforest. Our first stop was Red Peak station, where the gondola descended through the canopy layers and took us deep in the forest. Red Peak Station (545m above sea level) is nestled amongst pristine rainforest with a 175 metre boardwalk providing a perfect opportunity to explore the forest from ground level. The Station is surrounded by towering trees, lush palms, giant ferns and a diverse array of plants and wildlife.

We managed to catch a free guided ranger talk where Ranger Rob pointed out various plants along the boardwalk, including our favourite ‘Strangler Fig’ and the interesting fern baskets that only disseminate sideways. 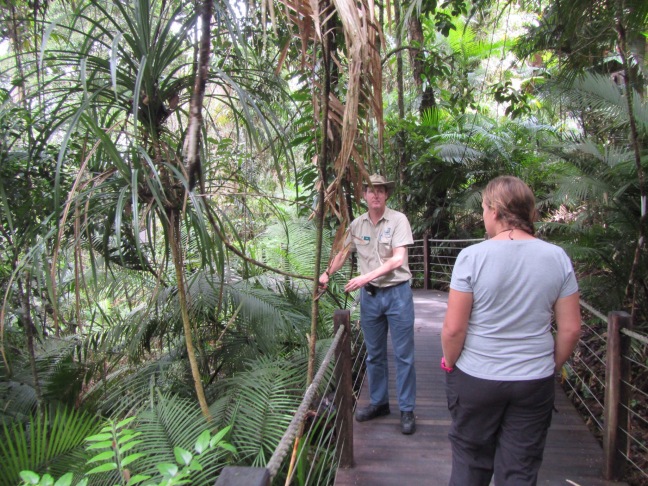 We then continued on to the second station of Barron Falls, where we enjoyed spectacular views of the Barron Gorge, a deep chasm lined with dense rainforest vegetation at a couple of different lookouts. Having explored the three lookouts, which provided breathtaking views of the Gorge and Falls, we headed off to the toilet area where Ranger Rob had told us that a wild cassowary had been spotted over the last few days. Walking quietly and peering around, we must have looked quite odd staring out into the vegetation trying to catch a glimpse of the worlds second largest bird. No such luck unfortunately so we headed to the information centre before catching the last section of the cableway to the Tableland village of Kuranda. 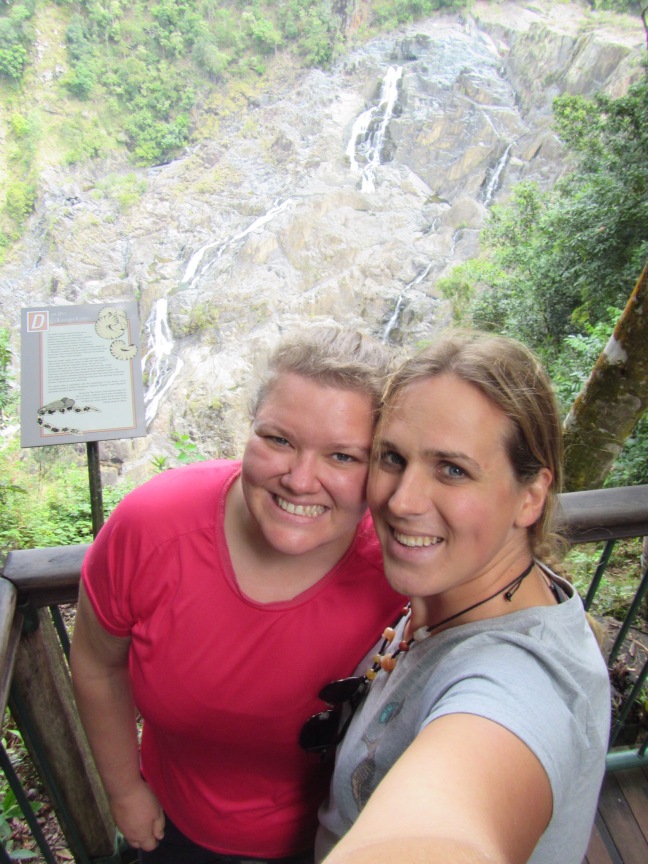 Arriving in the village, we walked up to the main streets, looking into the aboriginal markets that are held here. Deciding to veto the zoos, we decided to compete a couple of the walking trails in the area. There are six walking trails around Kuranda from a walk through the village to a rainforest stroll through the undergrowth to a more strenuous hike back to the Barron Falls lookout.

Conscious of the fact that we needed to get the train back to Cairns at 15.30, we opted to do the village walk and a couple of the rainforest ones. It was really nice having the trails mostly to ourselves as we explored the area.

Our last walking tour dropped us straight outside the train station as we caught the Kuranda Scenic Railway back to Cairns. Winding 34km through picturesque mountains, the track was completed in 1891 by workers who had to bring their own tools or dig by hand, battling sickness, steep terrain and venomous creatures. The journey took just under 2 hours and had a running commentary throughout as well as slowing down at various significant points along the route to allow for photo opportunities. 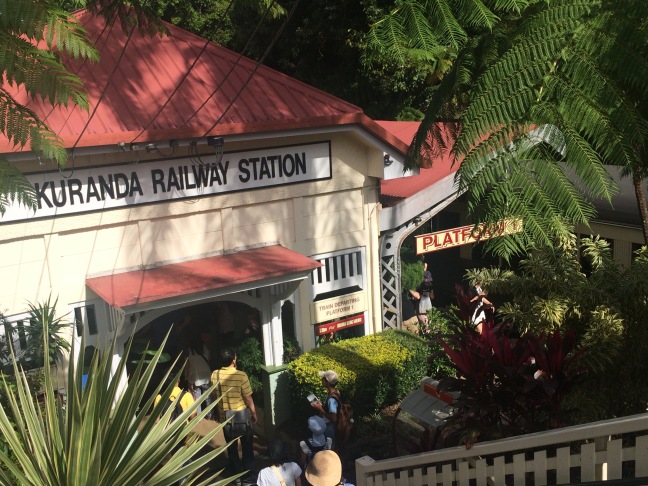 Back in Cairns, we popped into Coles to get some food for dinner before heading back to the YHA. Drinking far too much goon wine with our pasta, we headed off to bed deciding that tomorrow is going to be a rest day as we are both tired from our travels up east coast.