I should have stayed up and watched the Secret Life of Walter Mitty. We love that film and it was on next when I clicked off the tv. The ninjas slept well and I didn’t, I at least should have had a good excuse. So, after packing up the car we headed back towards Darwin but turned off at Humpty Doo. Topped up with petrol from having chewed up a far ole’ distance on the highway already, and a quick pic with the boxing croc before we drove towards the Kakadu National Park. 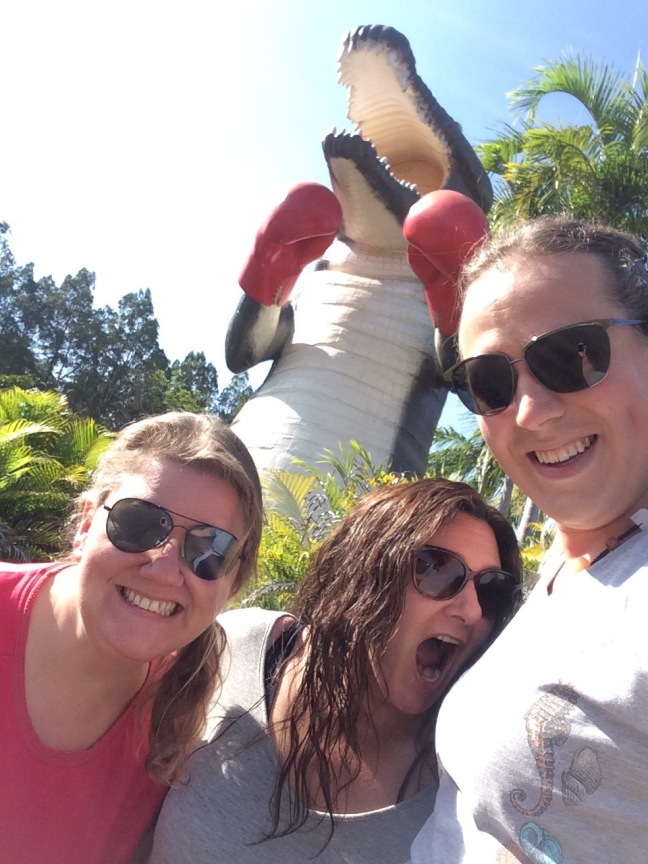 While en route we managed to purchase our park permits online. The 3G kept cutting out on Tracey’s phone but we got there in the end… only a few kilometres from where we could have bought ’em over the counter!

Continuing the adventure we missed the turn off for the croc tour. Oops, quick U-turn. Recommended by Ben yesterday to go with this company we drove a long way down a dirt track with the dust from vehicles in front being a small comfort that we were at least getting lost in convoy.
We managed to get a slot on the 11am boat. But, with so many people turning up they stuck all the elderly and children on this boat and sent out the ‘cool’ boat for another group at 11:15 (much to the satisfaction of everyone on board). The guide had forgotten his bait stick so asked us to hold the steering wheel in position while he went ashore to find one. I have to say, personally, that I think that pushing the throttle forward a nudge was prudent in the situation as the boat was pulling off the jetty and surely he’d like both us and vessel still there when he returned. However, he didn’t find it acceptable and asked someone else up JUST to hold the wheel. Whatever! 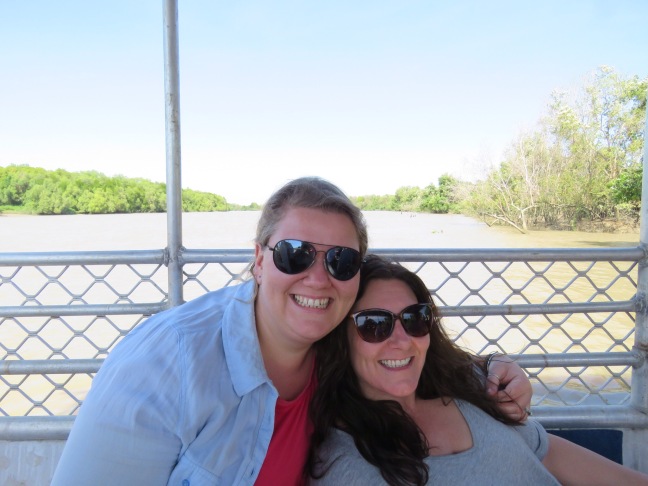 We only went a small distance across the Adelaide river to our first croc. Domino, a 5m male, had set up territory across from the jetties and was waiting patiently at the side of the other boat for the food to appear. We thus got our first glimpse of this prehistoric reptile with its head lurking out of the water next to a tin can with perhaps 20 people. Oh, and he was longer than the boat. And our boat was a smaller boat than their’s. Yikes! 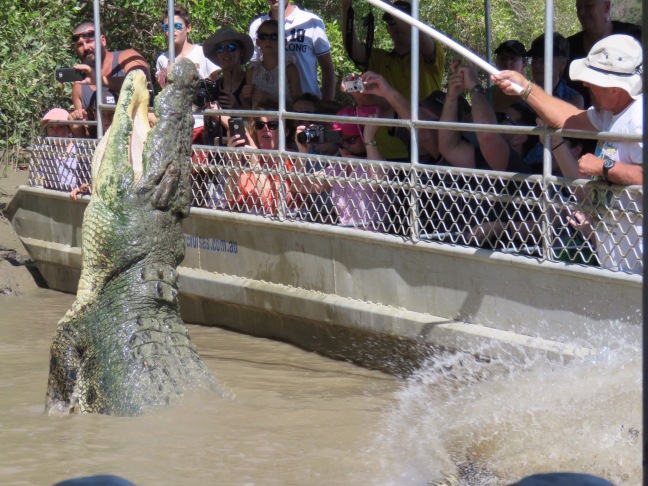 So, when he jumped from the water, a terrifying realisation that the side bars are nowhere near high enough and this is indeed an apex predator. We loved every second. Braving the edge and railings a bit more as the cruise went on, we got photos of a half blind female, other quicker, more nimble, higher jumping females, a scrawny little male and a couple of juveniles. 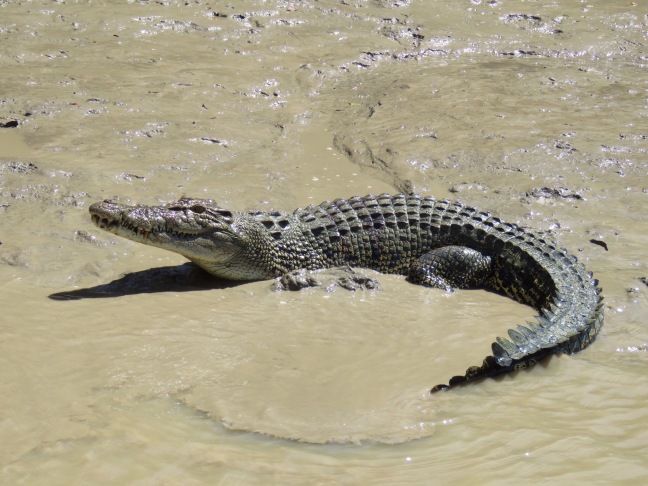 Katherine and Tracey plied the skipper with questions to which everyone listened to the answers and we traversed up and down the river, zigzagging across the choppy waves to different territories. The adrenaline was magnificent and the new camera managed to capture some continuous shots of the morning. It was pretty epic and something we’ll never forget.

Stopping at the weirdly beautiful transmission station down the road we were on the highway heading towards our UNESCO World Heritage Site #52. Katherine is delighted that we managed to achieve 1 WHS per week before we had been travelling for a year. What started as a route to decide our travel destinations is now something worthy of a Dave Gorman show and I think we need to sit down and work on the idea. The now obligatory photo of the UNESCO symbol at the site was provided by the lovely Tracey when she did another U-turn.

Kakadu is a whole lot more than a national park. It’s also a vibrant, living acknowledgment of the elemental link between the Aboriginal custodians and the country they have nurtured, endured and respected for thousands of generations. Encompassing almost 20,000 sq km it holds a spectacular ecosystem and a mind-blowing concentration of ancient rock art. The landscape is an ever changing tapestry periodically scorched and flooded, apparently desolate or obviously abundant depending on the season.

The charming navigator in the back seat planned our lunch break at Mamukala wetlands. A beautiful observation platform granted uninterrupted views of wading birds, ducks and the occasional passing raptor. It was serenely peaceful except for the birds and that’s totally acceptable and refreshing. We let grub settle down before hitting the road to Ubirr. Kakadu’s rock art has many fine examples at this site as well as stunning views over the landscape. Including depictions of traditional Aboriginal law and learning, and the abundant foods to be found in the area, the bus loads of visitors don’t disturb the inherent majesty and grace of the place.

Layers of rock-art paintings, in various styles and from various centuries, command a mesmerising stillness. Part of the main gallery reads like a menu, with images of kangaroos, tortoises and fish painted in x-ray, which became the dominant style about 8,000 years ago. Predating these are the paintings of Miami spirits: cheeky, dynamic figures who, it’s believed, were the first of the Creation Ancestors to paint on rock (given the lack of cherry pickers in 6,000 BC, you have to wonder who else but a spirit could have painted at that height and angle). 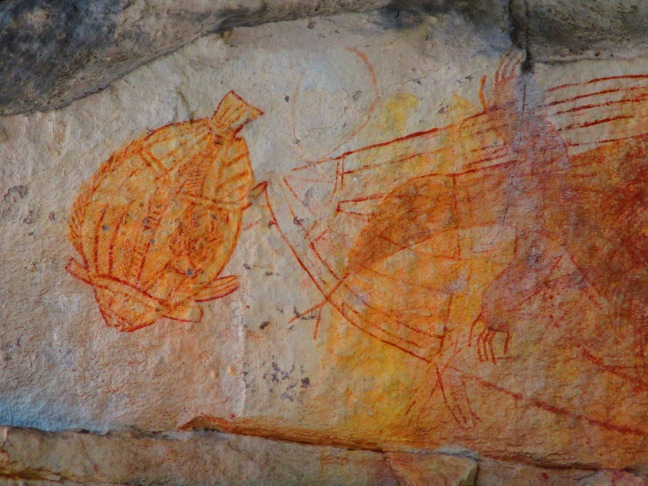 The magnificent Nardab Lookout is a 250m scramble from the main gallery. Surveying the billiard-table-green floodplain, the landscape changes dramatically from the soaring sandstone escarpments of Arnhem Land to monsoon forests and savanna woodlands and tidal flats in the distance.

The beauty of the area is lost on the youth: the children are impatient and running amock and adolescents are more concerned about a unique selfie or dangerous pose over the cliff ledge. But, we enjoyed it and headed down with enough time to explore more paintings and head back towards Jabiru before sunset and darkness. 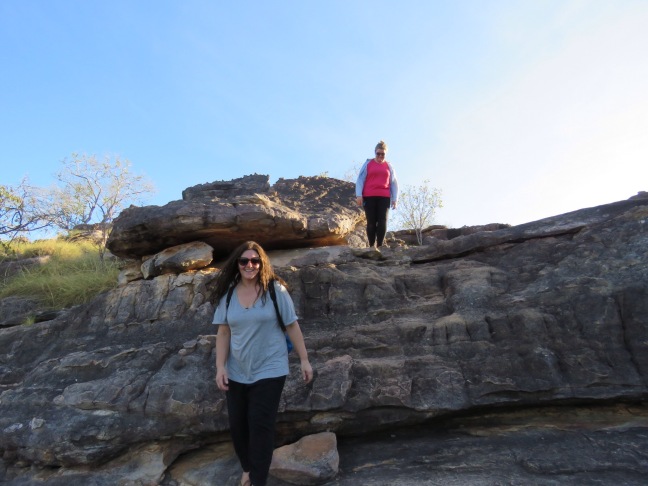 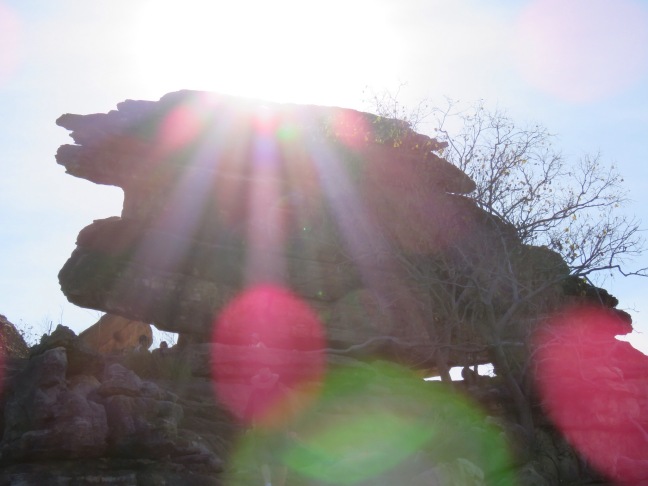 I had saved on to the MapsMe app where our accommodation was for the the night. So, it was annoying that we drove in to this caravan park without any signs and not a reception or office in sight. I looked up the address of the place on the tourist map and directed Tracey to the other side of town to where the address said it would be – nothing. So, we drove around the town looking for somewhere that we could then ask for directions. Eventually finding the campsite, I was quite upset that we drove in to the same place as earlier. We had come in the back entrance of the complex (the only road marked on my map) and thus the little jog around town was a big waste of time. Tracey and I went down to the garage to get stuff for dinner and Katherine sorted out full SD cards for a change. It was pretty awesome cooking burgers on the barbecue and a late night dinner was had with a nice cool breeze blowing through the complex. Our ‘bush cabin’ was raised very high on stilts and the glamping vibe was quite nice to wind down after another action packed day.