The name ‘Kakadu’ comes from the Gagudju language, spoken by Aboriginal people in the north of the park. Today, the three main languages spoken in the park are Gundjeihmi, Kunwinjku and Jawoyn. Rock shelters, stone tools, grindstones and ochre quarries in Kakadu are reminders that Aboriginal people have lived in this area for over 50,000 years. We don’t speak any of these languages and we only stayed one night at an Aboriginal-owned park. But, what a tough night it was! Woken at 03:00 by the bats in the trees above our ‘tent’, we were exhausted and a bit grumpy when we finally gave up the pretence of sleep and had our first coffee of the morning. The Rangers were out and about washing down cars from all the bat guano and piss and the smell was pretty horrific. Second coffee in our systems, we filled up with petrol, chose the biggest pastries at the bakery and headed down the highway to the first stop.

Arriving at Nourlangie the sight of this looming outlier of the Arnhem Land escarpment makes it easy to understand its ancient importance to Aboriginal people. Its long red-sandstone bulk, striped in places with orange, white and black, slopes up from surrounding woodland to fall away at one end in stepped cliffs. I planned a walk around the billabong for us before going over to the main site. However, in the car park we saw a trail map that led up the hill to Nawurlandja Lookout so we decided to break up the morning with lookout, lake walk and then main site. Wow, what a view! 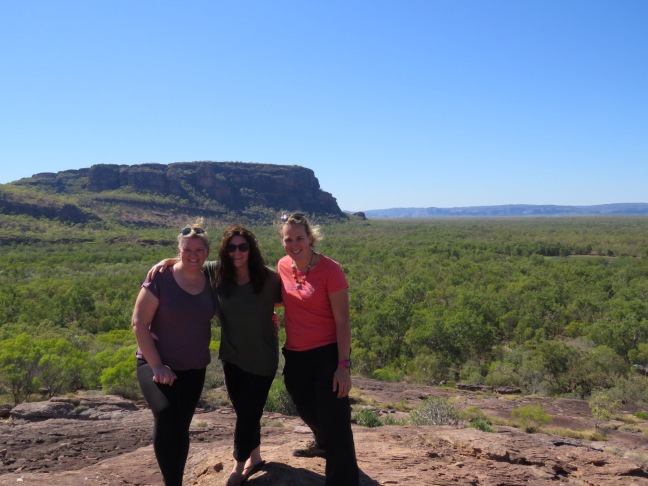 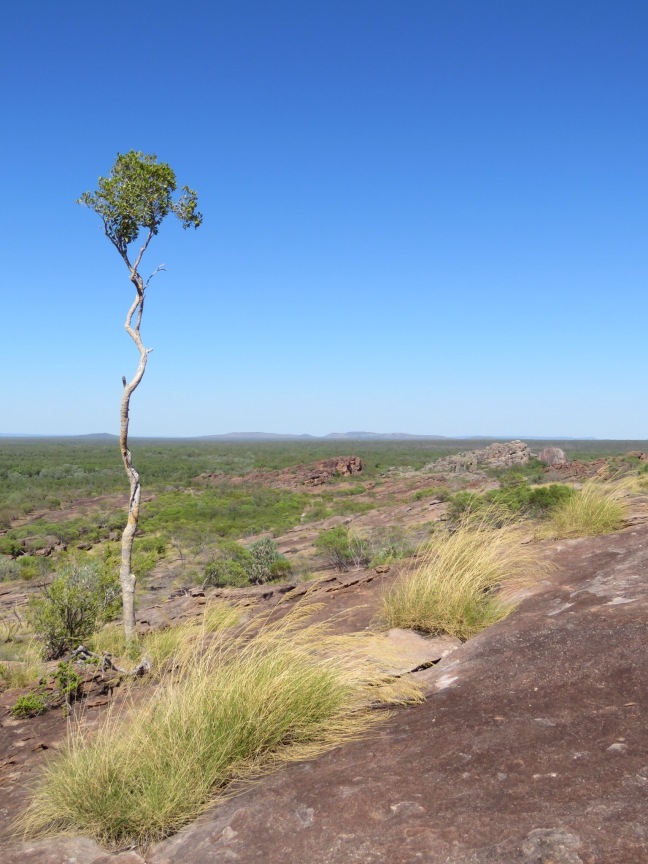 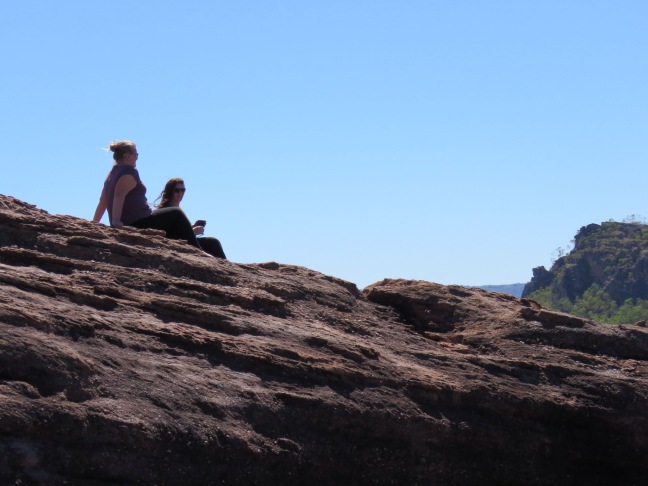 Sitting on an outcrop of sandstone, finding some unmarked paintings on the way to this viewpoint, we sat as long as possible in the morning sun gazing out at the impressive views. The shade in the trees around the Anbangbang Billabong Walk were lovely and provided a perfect spot to enjoy the pastries from the bakery. The track circles the receding water, with signs showing how close the crocs can get to tourists along the route without them realising. We passed through the paperbark swamp with no hassle and enjoyed the multitude of birds, both native and migratory, that habituate this picturesque area. 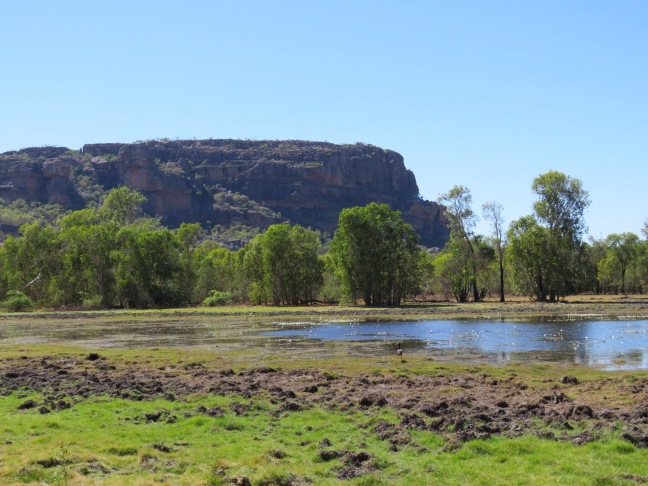 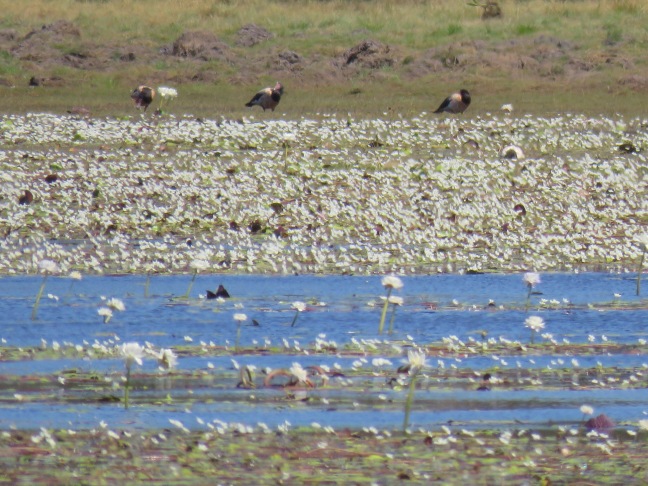 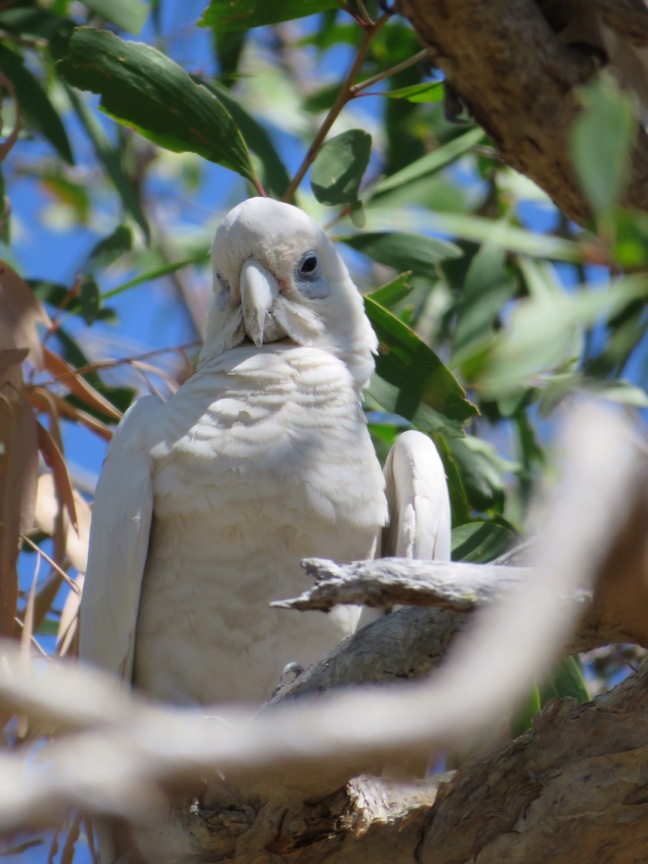 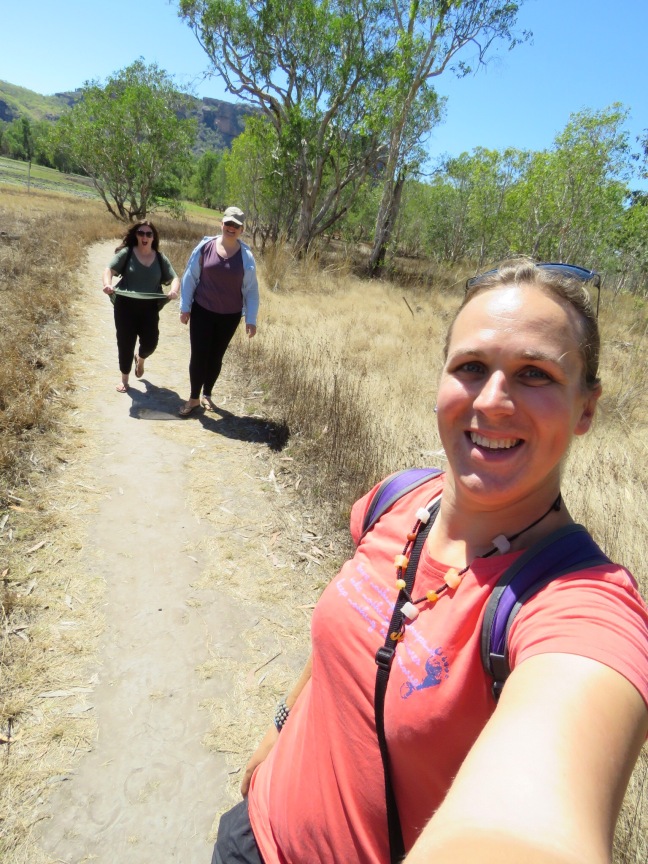 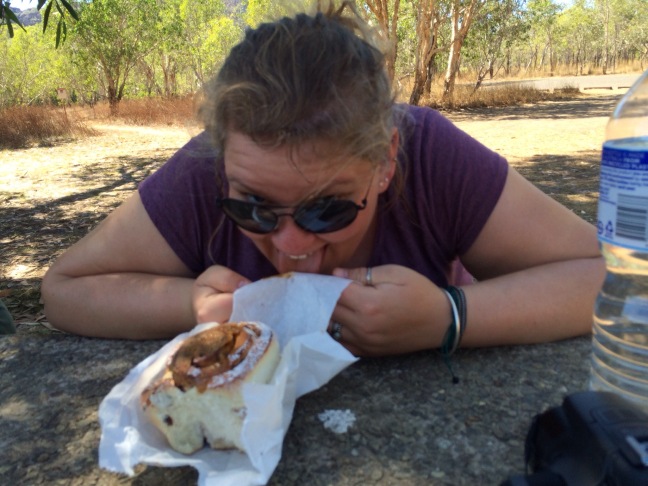 The name Nourlangie is a corruption of nawulandja, an Aboriginal word that refers to an area bigger than the rock itself. The 2km looped walking track takes you past some of Kakadu’s best-known collection of rock art. With the majority of sites off limits or inaccessible we started at the Anbangbang Shelter, used for 20,000 years as a refuge and canvas. Next was the Anbangbang Gallery, featuring Dreaming characters repainted in the 1960s. The information board at this gallery made it incredibly easy to locate Nabulwinjbulwinj, a dangerous spirit who likes to eat females after banging them on the head with a yam. From there it was a short walk around the base of the cliff and up the hill to Gunwarddehwarde Lookout. Spoiled once again for incredible views of the Arnhem Land escarpment we had to leave again due to the blistering heat. We didn’t see any signs of the wandering buffalo bull that lurks in the area… we like to live dangerously. 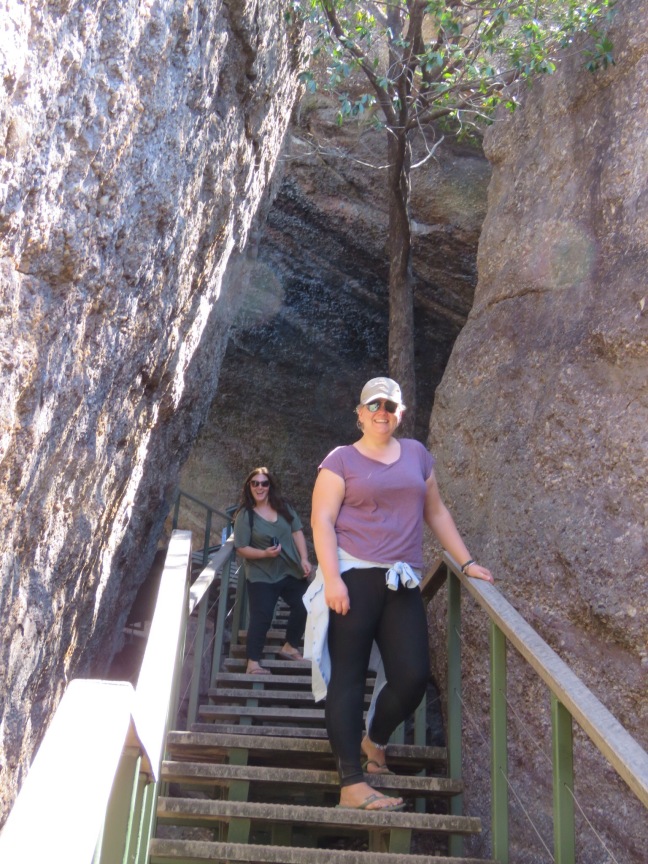 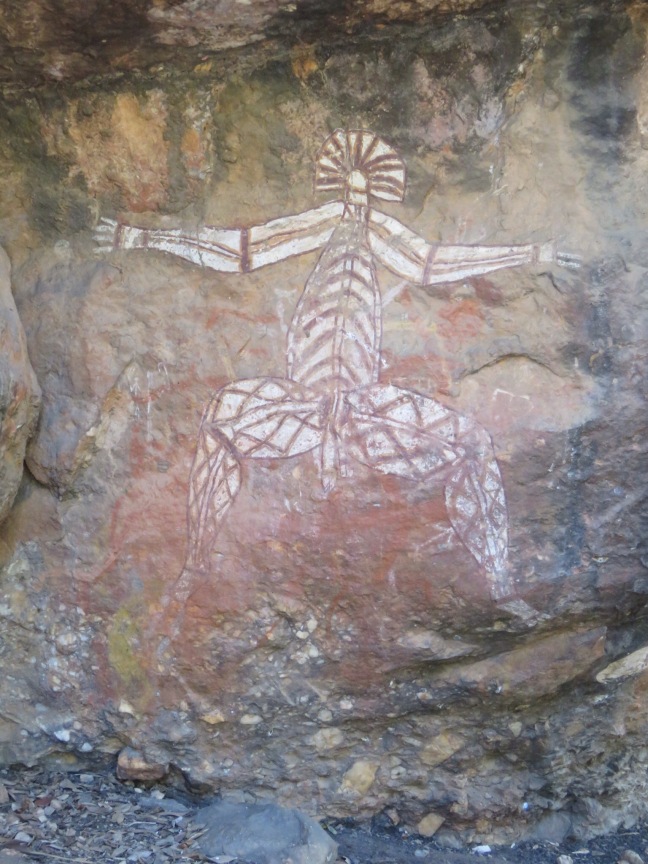 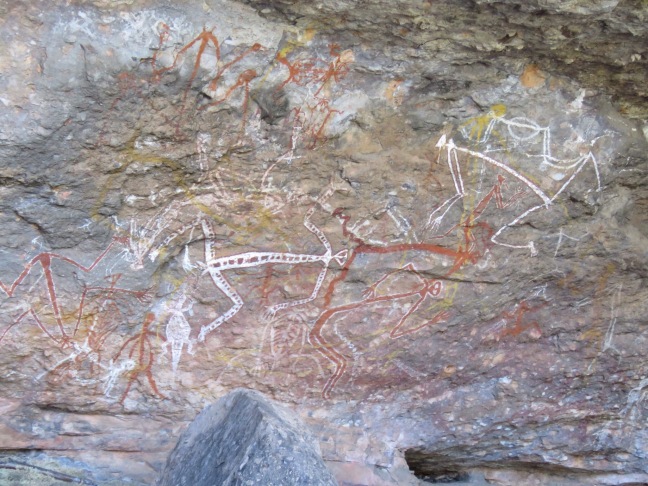 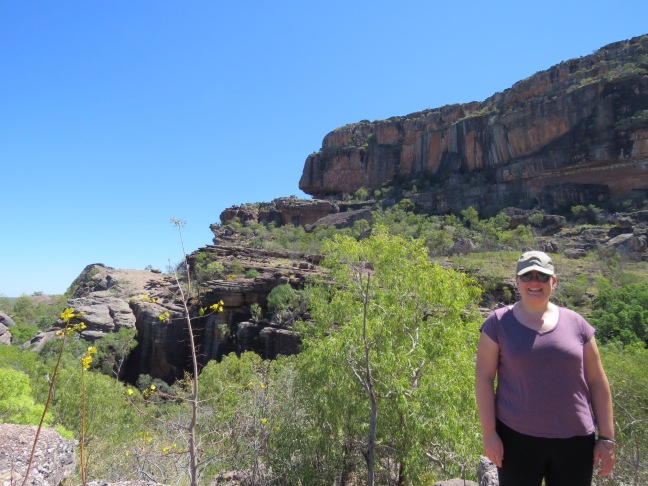 Tracey at the wheel, we were down to Cooinda and Yellow Water before long, i.e. – blink and we were there. But, it didn’t seem like anyone else was having a picnic in the area so we asked some bus drivers who were waiting for a cruise boat to return. They must have thought us mad for thinking to eat in the area, it is apparently littered with crocs, not just the shy freshies, but the big salties. So, food in the bag, we went looking for ’em. Katherine spotted one off the end of the jetty hanging around for the boat too, possibly for an unruly brat that may be easy pickings (or thrown overboard). The end of the walkway was bloody noisy with a massive flock of Little Corrolla’s perched in every single branch of about three trees (not thirty trees, just three trees). Down the road a bit further we enjoyed lunch in the picnic area of the campground and an ice cream from the shop. 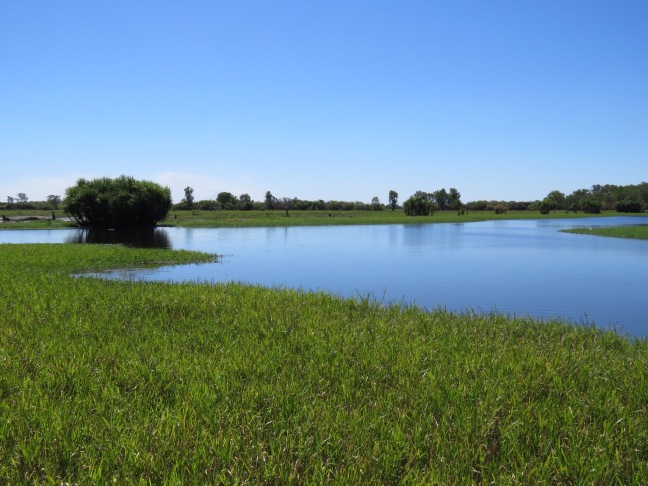 We’re not sure if we were meant to bring our own sheets, they had forgotten to leave them in the dorm room or perhaps a combination of the above. We forgot to ask and went for a swim in the pool instead. Complete nonsense, hysterics and good fun for maybe half an hour and we we cooled off and refreshed. Plus, it washed the feet for the two ninjas who continue to walk in the bush with flip-flops. 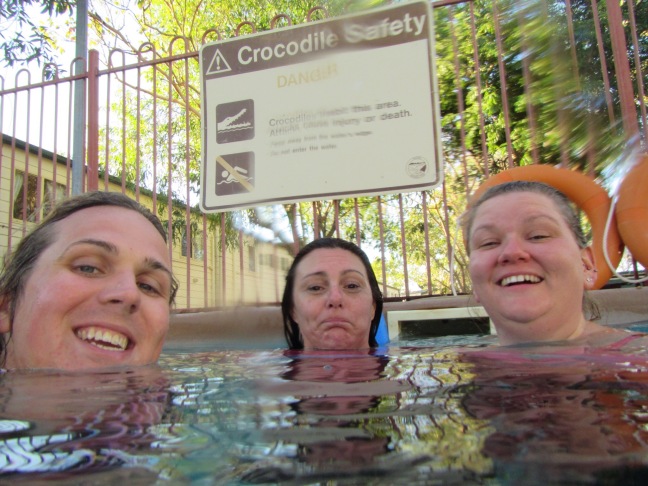 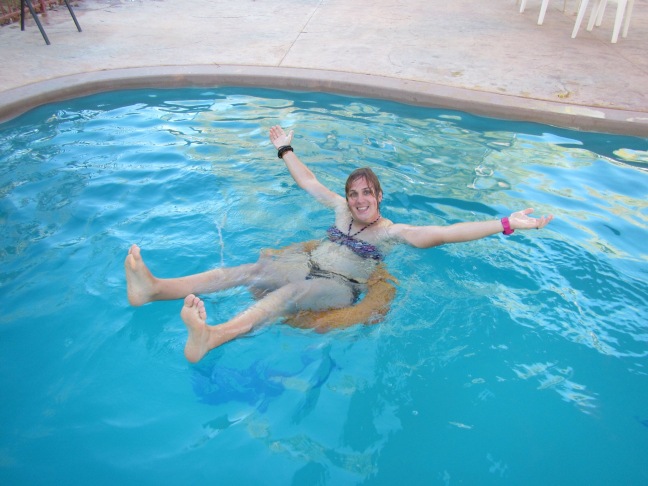 With little choice available for dinner options in the shop, we treated ourselves to Chicken Snitty. A lovely meal in the bar area, with the Olympics on in the background, the two amigos enjoyed buckets of white wine and I topped up on electrolytes. In the end I payed the piper for needing the loo and traversing the camp ground to pee, praying that I didn’t spot a snake. Anyway, we enjoyed our evening, teased the baby croc in the aquarium with a wooden replica of itself and headed to bed. An assortment of clothes, nod-pods, taking the fourth mattress, sheet and pillow and we tried to get some sleep as we were frozen but exhausted. 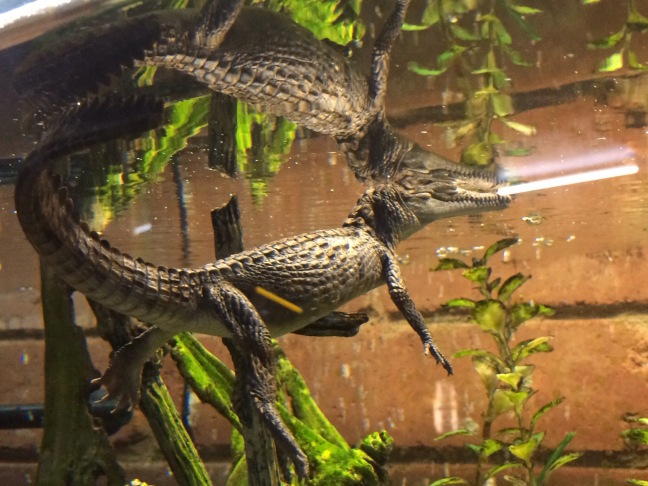 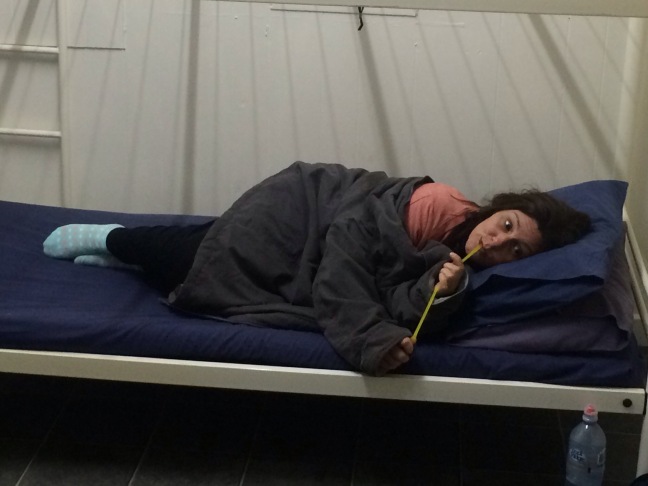