I’m really hoping that today’s blog will be relatively quick and easy to write. It involved a lot of driving, lots of music, and a whole load of fun.
Leaving the resort by 07:30 we treated ourselves to a coffee at the garage before hitting the highway. There were a few wallabies by the side of the road still enjoying the coolness of the morning and lush vegetation and Tracey saw her first wild dingo. It didn’t appear to be eating any babies.
About 3km off the highway, after a number of bloated (ready to pop) cows , we had a stop at Daly Waters. An important staging post in the early days of aviation − Amy Johnson landed here on her epic flight from England to Australia in 1930. Just about everyone stops at the famous Daly Waters Pub and we were now part of the posy. Decorated with business cards, bras, banknotes and memorabilia from passing travellers, the pub claims to be the oldest in the Territory (its liquor licence has been valid since 1893). It has become a bit of a legend along the Track, although it may be a bit too popular for its own good.
Further down the Stuart Highway there was a change of drivers. Katherine was at the wheel and had to learn how to deal with the heat shimmer on the road, the dips in between the visible sections of road and the white blobs of vehicles that one second are far off in the distance and suddenly really close due to the speed and misperceptions of the terrain. She did a sterling job and even overtook a road train (on a bend). Tracey continued to teach the young padawan the tricks of the road and we chewed up a fair distance before lunch.
Our lunch break was spent slagging off the grey nomads who couldn’t decide what they were doing with their caravan. It was quite painful watching the drama unfold like a bad black & white film. If there was a frying pan handy I would gladly have taken part in the antics. But, Tracey had us back in the car heading south before we lost the plot altogether. Katherine created a playlist and I carried on catching up with blogs in the back. I had to put in headphones at several points with the dodgy karaoke in the front being very loud (and bad).
The gigantic boulders in precarious piles beside the Stuart Hwy, 105km south of Tenant Creek, are called the Devil’s Marbles. Karlu Karlu is their Warumungu name, and this registered sacred site has great cultural importance. The rocks are believed to be the eggs of the Rainbow Serpent. Stopping at 3 points at the site, the main site has a ’15-minute’ walk that loops around an area – we spent much longer going around marvelling at the granite formations from different angles and trying different camera settings. 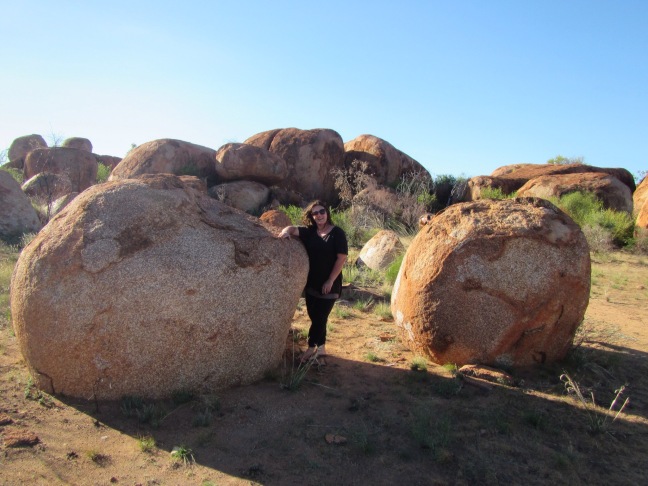 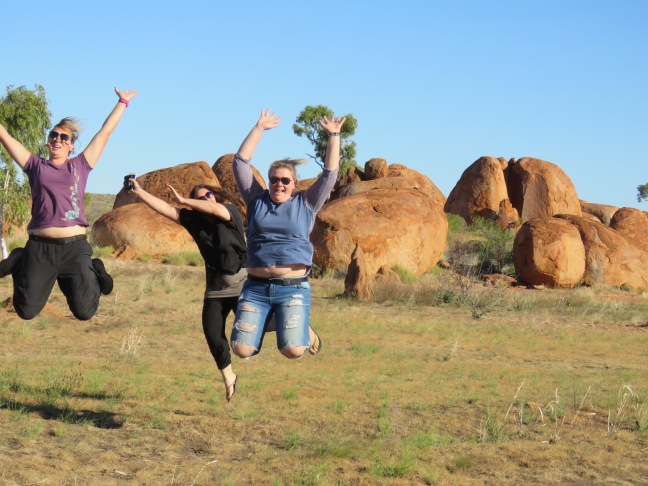 This geological phenomenon is particularly beautiful at sunrise and sunset, when these oddballs glow warmly. We did sit down for the sunset spectacle, knowing that tonight’s accommodation is only a few minutes down the road and we’d be there before it was dark. Thus, we witnessed the stone change from a rich golden glaze, to a warm terracotta, to a gentle ochre. The disrespectful people climbing all over the rocks took very little away from the majesty of the transformation and when our shadows were as long as the giant formations we were admiring we left. 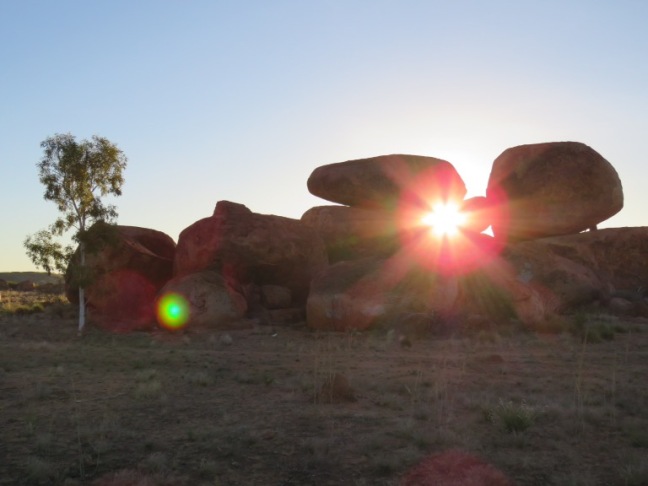 Arriving at the hotel we had completed our 791km journey and finished the longest leg of our road trip. Settling in to the room, the peace was disturbed as Tracey was attacked by a gecko. Rather, it must have been stuck in the air con unit above her head and it only dislodged when the tail fell off… the tail that continued to wiggle on her bed.

With hysterics in full swing I disposed of the sadly deceased reptile and gave her the iPad to watch The Inbetweeners. I’m sure all trauma was soon forgotten as she laughed away while we fell asleep.