I’m going to skip what we did when we got up because let’s face it, our bowel movements and what we ate for breakfast must be pretty damn boring by now. The most exciting thing that happened was that Katherine thought she saw Amanda’s (the Canadian) nipple at breakfast as she paraded around in a top that was two sizes too small. I missed the entire thing so I can’t vouch for the sighting. We left around 9am to head out on the days adventure. We picked up our hire car and headed out in the road. We had our trusty map, (thanks Lindy) and a tank full of fuel with the excitement of possible sea lion sightings keeping us focused. Our first stop was the Pennington bay lookout. Pennington Bay is on the south coast of KI (Kangaroo Island) that’s accessible by an unsealed road. It offers some of the best surfing on the island. The surf is not ideal for swimming but it’s great for taking photos and laying on the beach. Surfing is still the main activity as the surf can be large and rough.

Next we headed off down the back roads to Clifford’s Honey Farm. Random Fact: Kangaroo Island is the last place in the world where pure Ligurian Honeybees remain. They are Italiano!!

Herein lies the end of the lore of the Hobbit. She never finished her blog and it is up to one of the big folk to finish her tale of adventure.

After watching the short informative video about the bees, looking at a see-through hive of the species and looking at artefacts of the trade, such as transport boxes for queen bees to go to other countries, we went back in to the gift shop. Tracey and I bought some of the exquisite honey ice cream and with the minimum payment on the credit card needing a few more dollars, I tried the mead. Memories of a long forgotten story of a tavern on the drive to Wicklow came back to me and the golden liquid was delicious. Far too easy to drink, it was a good thing it came in a small plastic cup. 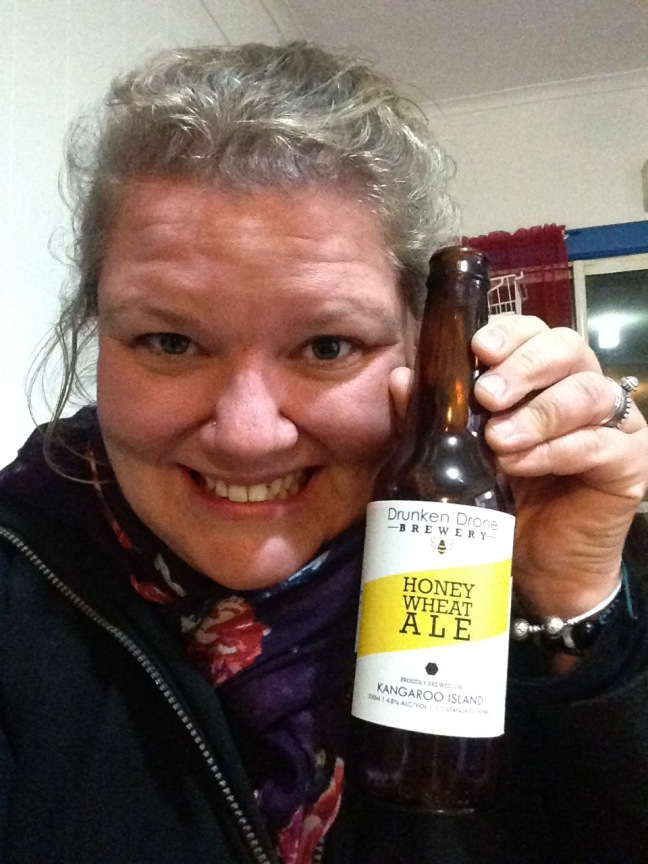 Around the corner was the Eucalyptus distillery. A compact little site with a gift shop bigger than the workshop we watched a video about the establishment as we came in to reception. Katherine was very posh and sat in the carriage for the presentation. Intrigued by the site and process of eucalyptus distillation we decided to do the self-guided tour. Katherine was our guide extraordinaire and pointed out various points of interest in the yard and explained the process stages as we passed. The jars and bottles of raw and refined eucalyptus oil were incredibly pleasant for the olfactory senses and with the multitude of uses for the oil now known to us, you can expect either a lot of trips to a Swedish sauna or a house smelling of the stuff in the near future. 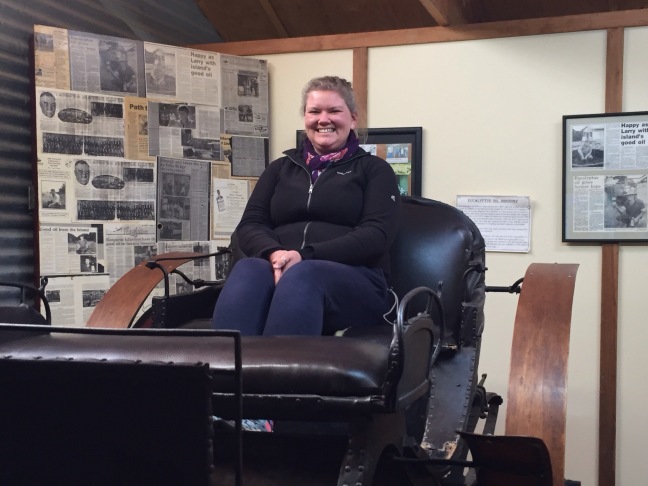 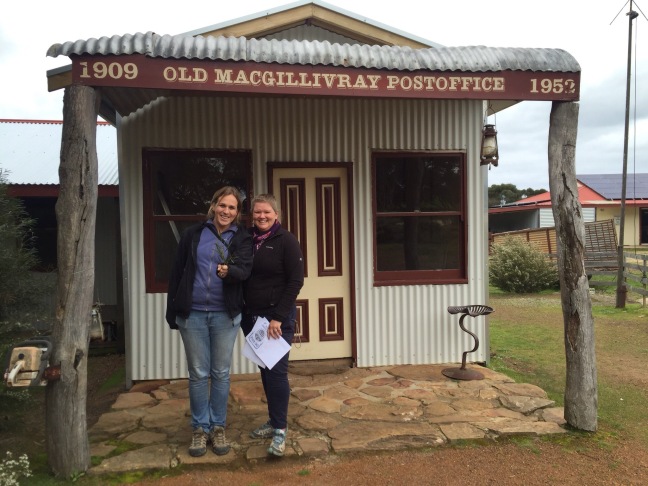 Driving to the Flinders Chase National Park we drove past beautiful scenery and a mixture of habitats. We paid our entry fee for the park and carried on to the Remarkable Rocks. Accurate in its nomenclature, these rocks are a prominent feature at the edge of a headland and are quite remarkable. The elements and passage of time have eroded the granite blocks to misshapen architecture with nothing between them and the Antarctic. 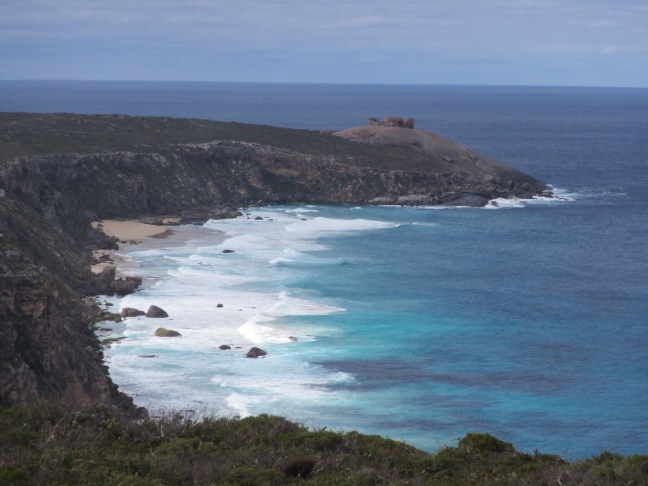 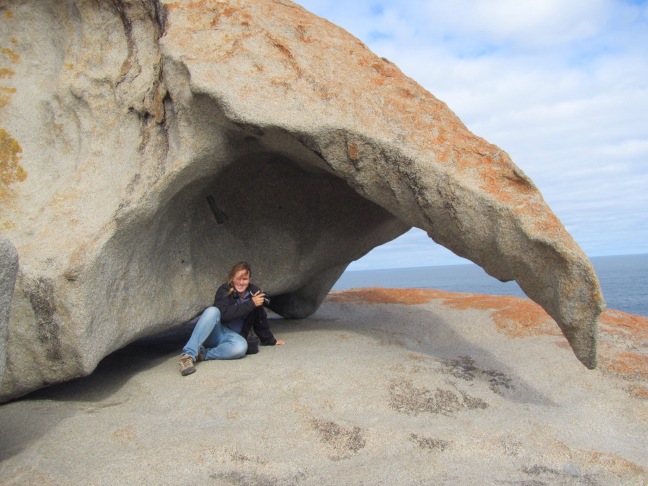 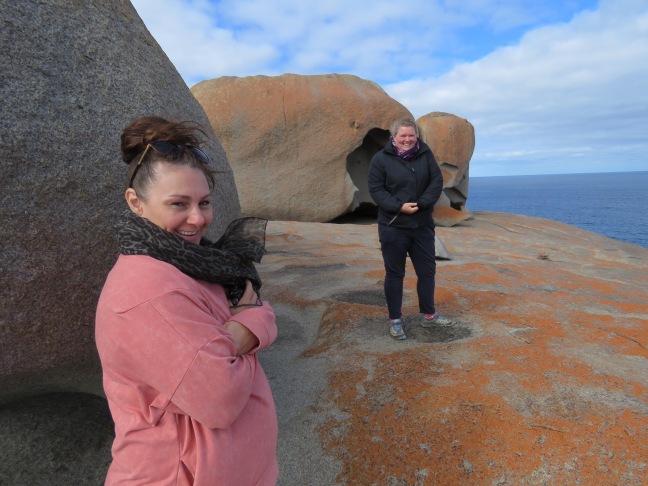 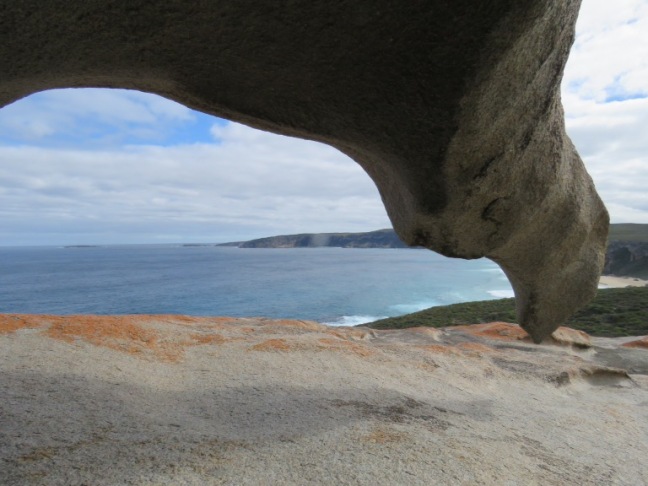 With evidence of possums and wallabies in the area we headed off to the Admirals Arch. But, one was a bit distracted firstly by the force of the waves crashing off the two small islands and then by the hundreds of fur seals adorning the rocks. It was a while (and a lot of photos) before we descended the rest of the way to see the arch itself. A beautifully framed piece of nature – an overhang of rocks, stalactites and vegetation with intertidal rocks peppered with sealions (New Zealand fur seals) and the gentle wash of waves into the protected little alcove. But, of course with bright sunshine pouring through the opening, no camera was every going to capture the full extent and beauty of the place in a still image. 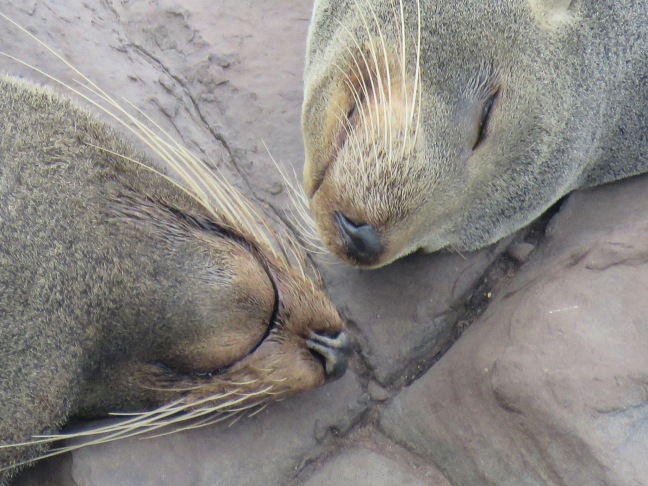 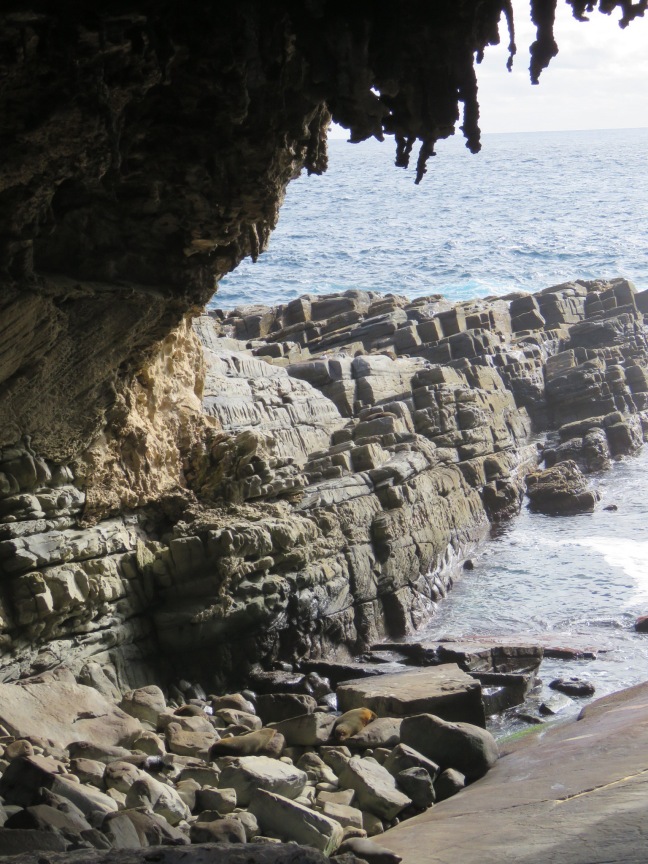 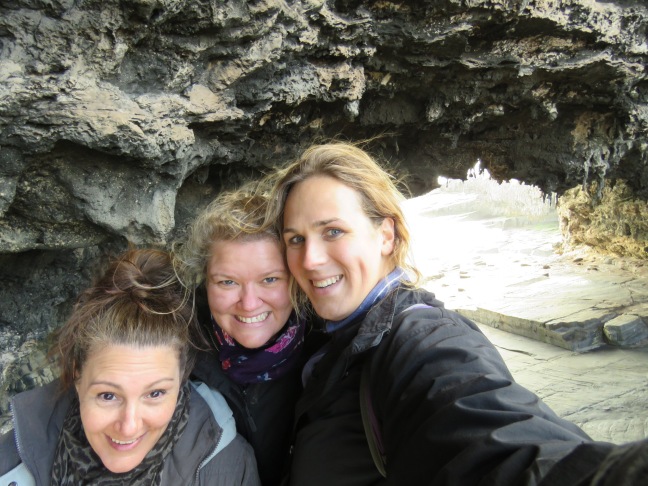 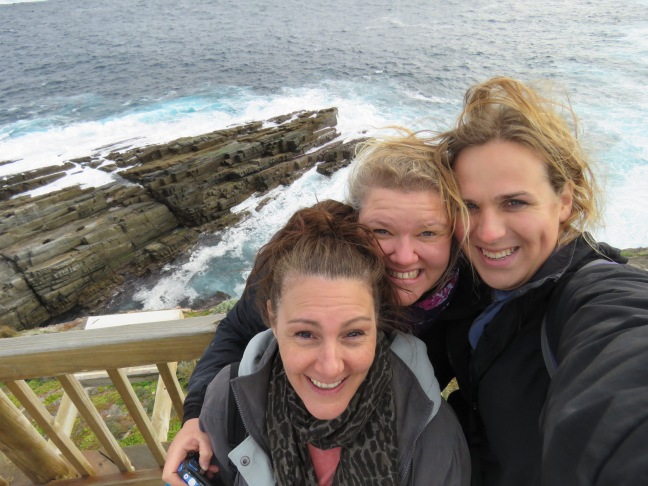 On a solid bluff of rock at the top of the hill at Cape Couedic was the lighthouse. Not a picnic bench in sight, so we plonked ourselves down on the steps, cut up some avocados from the Adelaide market with our sporks and enjoyed a delicious meal. It was interrupted by the bus load of tourists stopping to take a photo of the lighthouse – bloody tourists! Guess who was amongst the throng on the tour… Amanda. Wearing a suitable bigger top, Tracey was unable to verify earlier sightings. It was probably for the best, it was a bit cold.

A jaunt over to Weir Cove to see the site of the storehouse. This humble, sturdy limestone building (recently restored) would have been used to house supplies shipped in every three to four months for the occupants and lighthouse workers. Built on a treacherous, rugged coastline, I’m afraid the coastline was a bit more impressive than the history. The cliff face has still got it’s dramatic fissure hewn from the rock where the winch brought stuff up from the boats. No vegetation has yet reclaimed the passage to the sea below, but it has almost completely hidden the chains that are visible in the sand behind the car park. 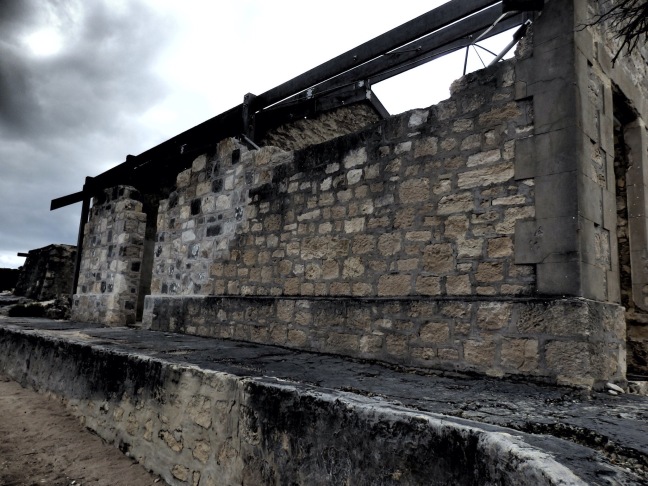 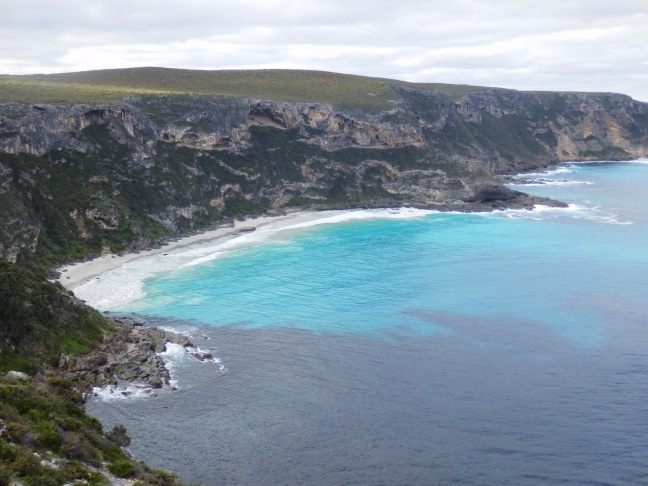 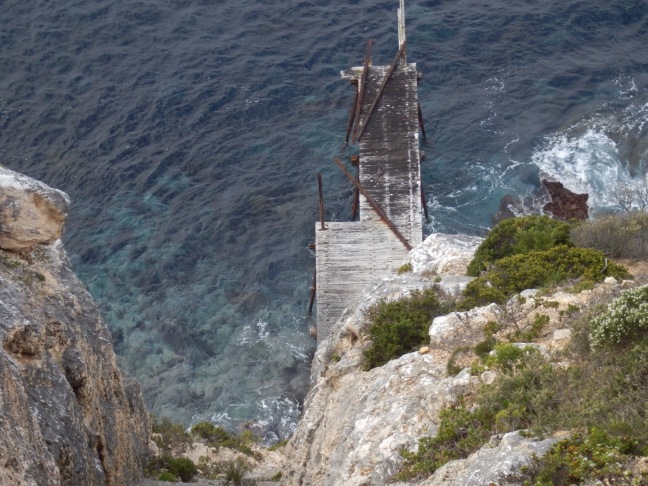 We chanced our pick at the caravan park down the road. MapsMe and insider info shows a walking trail around the perimeter for koalas. But, the owner was having none of it, the property just for camp site guests. Ah well, on we go. He’s losing out on a trick and could make a fortune just doing a gold coin donation. So, pulling over to see a wallaby – what the hell are you doing up in the middle of the day – we slowed down quite a bit and none of us had a camera ready for the big kangaroo that skipped across the road. Thankfully we reached Vivonne Bay without incident and looked out for the mother and calf Southern Right Whale that has taken refuge her for a bit lately. We didn’t spot any cetaceans so proceeded to try jumping photos on the sand. Tracey was either deliberately trying to tire us out with jumping or was having a special moment with the camera. Either way the slog up the sand was tough and we were silent for the journey home. 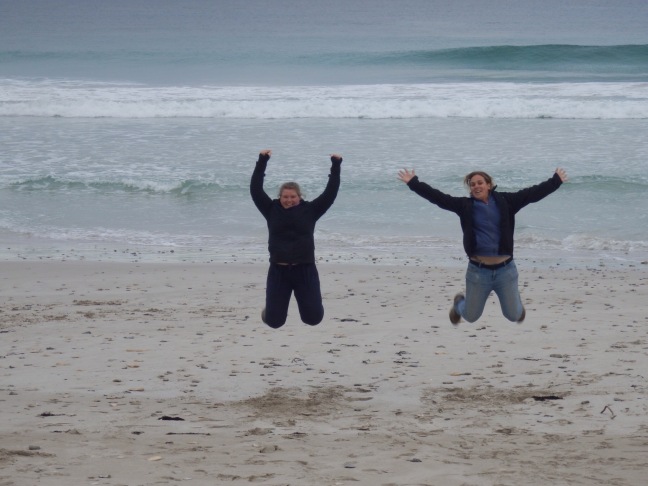 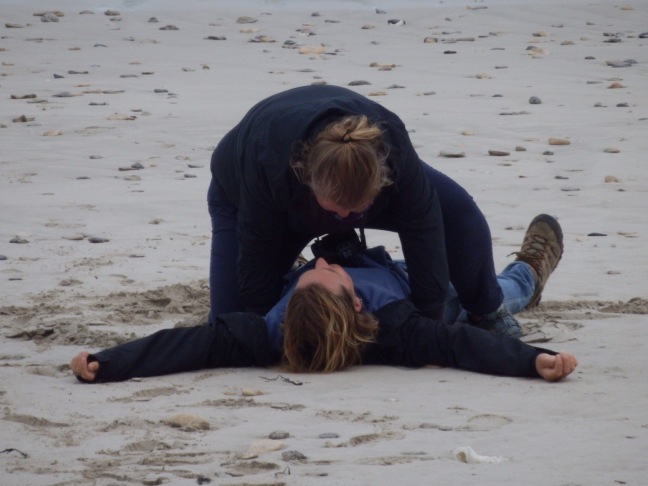 We ended up chasing the setting sun on our way home. Knowing that the marsupials were limbering up for the night and our insurance not covering us, we couldn’t stop to take any photos. But, it is still vividly clear in our minds of how the sun cast a golden colour on the trunks of the trees and the fields between them was a blur. Dinner sorted with ease, I finished the work for the beauty clinic at the computer (finally, weeks later) and the Ninjas caught up on some drinking – Tracey with the goon and Katherine with a honey ale and goon (I tore through my vodka pop once finished the computer stuff). All to bed with snoring the minute heads hit the pillows.