All woke up toasty warm from leaving the little heater on all night. On the plus side, our feet weren’t freezing lumps of ice. On the negative side, the aroma of three women slowing cooking in their own body juices in what can only be described as a miniature oven was an experience that none of us are keen to experience anytime soon. We tucked into our free hostel breakfast before packing up the car and heading out for the day.
Driving to the north coast of Kangaroo Island, we headed for the ‘secret beach’ that was recommended to us by Lyndi and Sarah. Apparently a bit of a challenge to find unless you have inside information, we headed for the RockPool Café and went to explore. Stokes Bay was absolutely stunning in its own right, with beautifully clear turquoise waters which were captivating in even the cold. However, to the very right end of the beach there was a secret sign directing us behind some rocks. At some point in time someone was clever/crazy enough to blast through the cliffs and create access to a secret beach. It took some ducking and weaving through the narrow caves, which was particularly difficult for Jayne and I as we are so tall – Tracey hopped, skipped and jumped through like a sure footed mountain goat, to reach this mysterious piece of paradise. 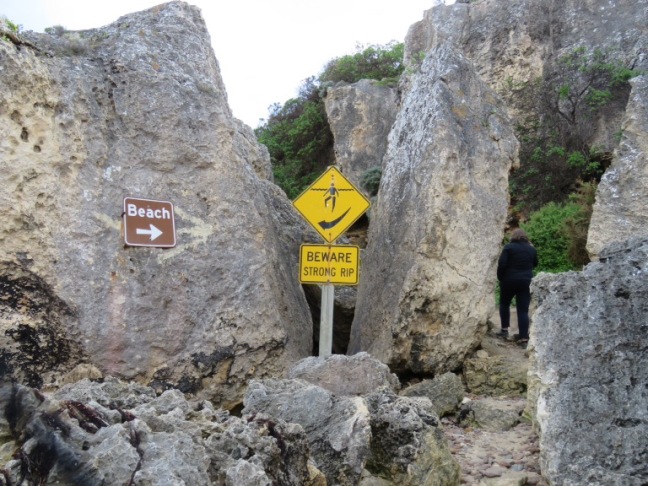 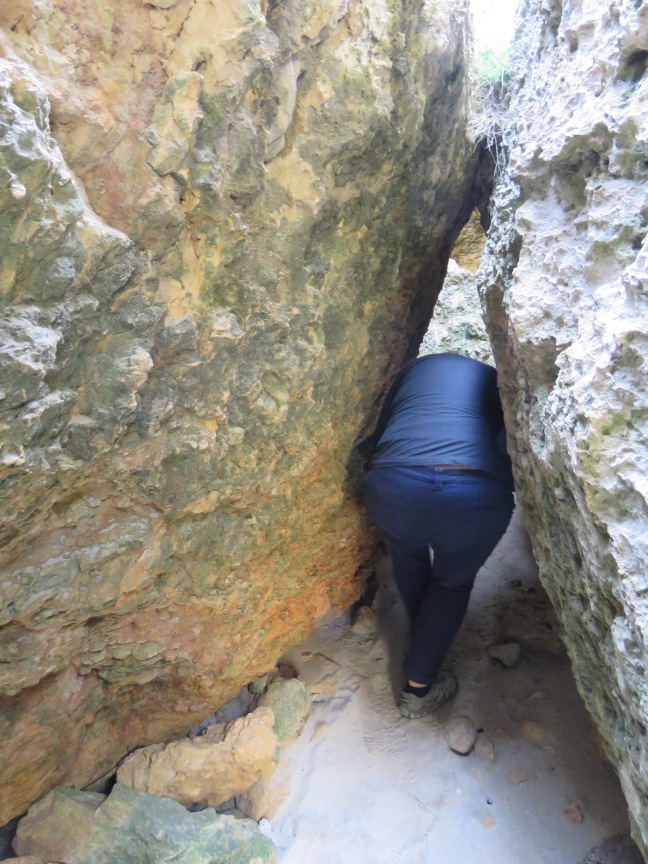 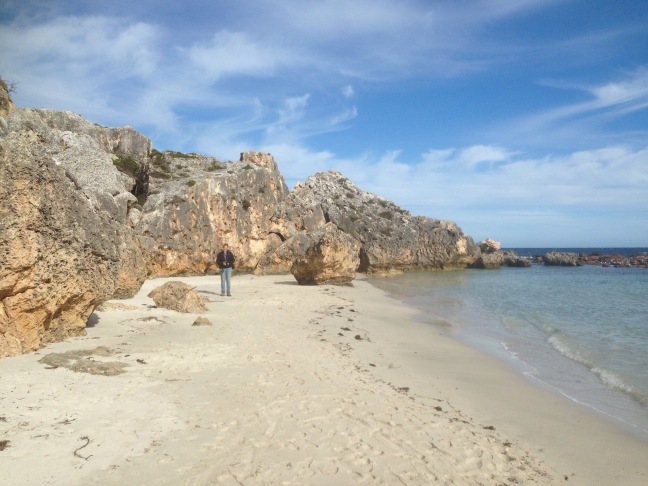 Wandered along the shore for a while, enjoying the tranquility of the completely deserted beach. The rapidly incoming tide cut our time short on the beach especially as waves started lapping into the entrance of the caves.

Next stop was only just down the road at Kangaroo Island Wildlife Park. Opened in January 1992 and sold to the current owners in 2013, the wildlife park is home to over 150 species of Native Australian wildlife and houses over 600 animals! We were fortunate enough to arrive in time for the koala talk, where we got to enter the enclosure with these cuddly bundles of fur, stroking them and posing for photos. Learning loads about my new favourite animal, I was delighted to find out that Jayne had paid for me to have a koala holding experience. Standing over to a quiet corner of the park, I was given Alfie to hold. 10kg of gorgeousness, as I was the only one with a koala experience, I got to hold him for ages! 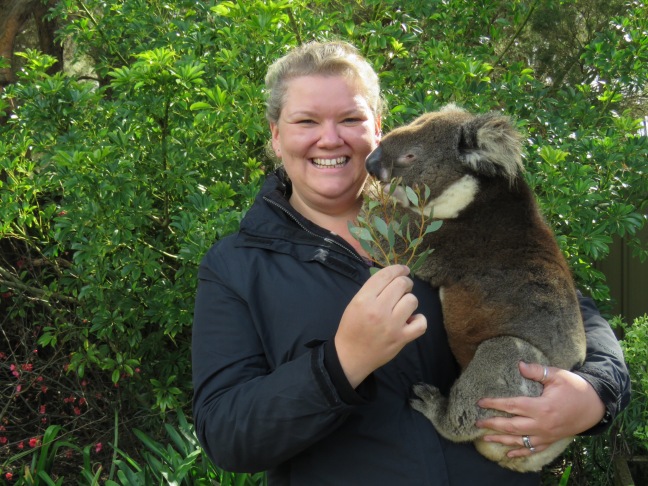 Reluctantly giving him back, we headed out to the rest of the park – small birds, nesting cassowaries, kangaroos, wallabies, wombats, penguins, farm animals, snakes, crocodiles and reptiles. They are currently building a new enclosure for dingoes (which was currently closed to the public but we spotted the dingo puppies being walked around the grounds and got to have a quick cuddle with them too!). 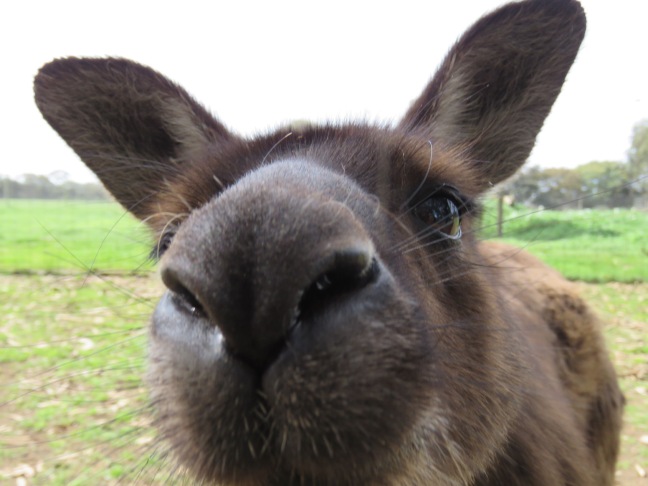 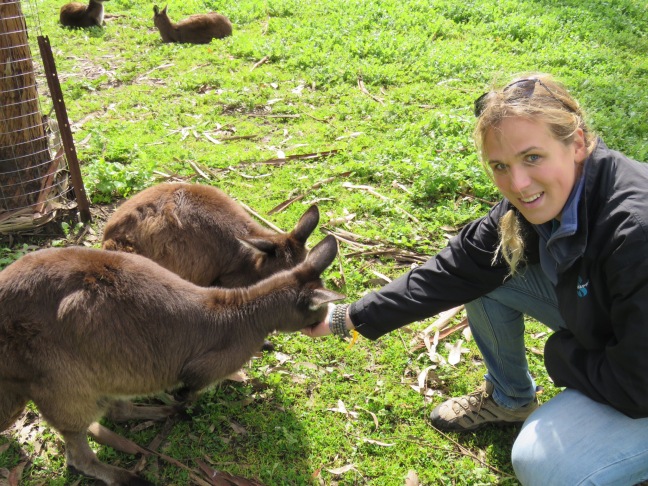 Found a quiet picnic bench to eat some lunch whilst we watched the world go by and got to watch the next group of people do the koala experience. A much larger group, they only got to hold the koala for a couple of minutes each before he went back into the enclosure – I was definitely lucky! Treating ourselves to an ice cream from the shop, we were delighted to discover that a major ice cream brand was using local ingredients to make the different flavours. Tracey and Jayne both chose the Kangaroo Island honey with pistachio flavour while I played it safe with a cookies and cream.

Back in the road again, we headed for Island Pure sheep dairy which is a 260 hectare grazing property situated on the banks of the Cygnet River and Gum Creek. Opened in 1992, twice a day the ewes wander in to a purpose-built dairy to be milked before heading back into the paddock. The dairy makes a range of cheese and yoghurt products which are entirely homemade on site. We began with a tasting season where we got to sample all of the products that they have available to buy. My favourite was the Cygnet cheese (a semi-matured manchego) whereas Jayne preferred La Casuarinas (a feta) and Tracey loved the Ravine Des Casoars (halloumi). 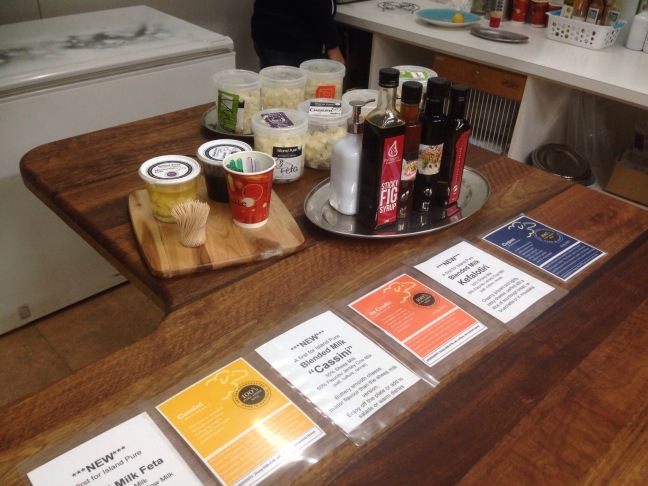 We then watched an informative DVD which explained about cheese making before getting a visit of the factory and watched the sheep being milked. A truly fascinating experience, especially as I used to be a ‘young farmer’. The milking process we saw for these sheep is similar to that when milking cows, except, that they only milk half of the sheep at each time and then swap the milking teats over.

Having watched Tracey stock up on cheese products (mostly halloumi), we headed off to our next stop of KI Spirits. Walking past the 80 litre copper pot which is still used to hand make their entire premium range, we sampled several different gins, spirits and liqueurs. Tracey treated herself to a coffee whilst I bought a drink of the ‘Old Tom Gin’. It was incredible and clearly I have expensive taste. It is the award winning drink of Oz and cost a small fortune per bottle – however, it slid down my throat like liquid gold! It didn’t need any form of chaser and I would have been quite happy drinking it as a digestif most evenings!

Last stop on our quick tour of the island was the pelicans. These massive birds have become accustomed to a daily feeding frenzy from a local man, who regularly gets into trouble for feeding the wildlife. Not entirely sure how we felt about it, we were delighted to hear that these birds are often present at this site an hour before the feeding time begins. As we made our way to a small, wooden amphitheatre set above the rocks that lined the harbour there were half-a-dozen of the birds perched on the rocks, along with a similar number of silver gulls. We watched the birds fly around and land nearby, waving their voraciously snapping beaks as they premed their feathers and waited for an easy meal.

Driving back towards the ferry, we kept our eyes open for any last sighting of kangaroos before catching the ferry. We filled up with fuel, having a slightly bizarre moment when the pump wouldn’t let us fill up the tank anymore but the gauge said the tank was only half full. A quick call to Hertz to explain the issue and we were reassured that sometimes the gauge takes a while to move. Sounded slightly fishy, we weren’t in a position to argue as we couldn’t put in any more fuel from the only petrol station in town and the office was closed. Had a pub meal as our last night together as a threesome on this holiday – I, unfortunately, had major food envy of Jaynes beef schnitzel but she gave me some in exchange for my salt & pepper squid so it all worked out (she is so good to me!).

Catching the ferry across the bay, we boarded the Sealink bus to take us back to Adelaide. The bus driver seemed to double up as the local postman as he stopped several times along he route to check the post boxes for letters and putting them in the bus (or we had just witnessed some very unstealthy post thief!). One of the passengers had a very loud and irritating laugh so Jayne and I fell asleep to block him out. Tracey took this opportunity to take unflattering photos of the two of us as we snored gently in the seats behind her. Arrived in Adelaide and made our way to the YHA. Clearly during the two weeks together, we still haven’t realised that Tracey can’t walk as quickly as we can… Sorry Tracey for walking too fast and that you had to remind us for the umpteen time! Fortunately, we were able to make our beds without worrying about waking anyone up, as all our roommates where out and we quickly fell into bed and passed out.