We had set our alarms for an early start but didn’t really need to… It was freezing! I even woke up at one point, contemplating whether to release myself from the cocoon of blankets to steal the free duvet from the bunk above. This idea was squashed quickly as I didn’t want to move one inch to let any cold in so slept huddled up and fully clothed. Ah… It brought back memories of being a poor university student all those years ago!

Warmed up in the shower, dressed and in the car before the other ‘hostel’ guests were up, we headed back down the road we had driven on last night at some ridiculously slow pace. In the daylight, it didn’t seem so scary but, with the amount of roadkill on the side of the road, it was a good job that we had gone slow.
I drove us the 30 minutes down the road as Jayne fancied doing some scuba diving. I really wanted to join her but my ears have been a bit sore recently and I didn’t want to push it, especially since I shouldn’t really be scuba diving at all. Dropping Jayne off at the dive centre, the one shore dive quickly became a boat dive followed by a shore dive. So with my blessing, she headed off for around four hours and got back in the car and headed back down in the direction we had just come from to walk in the Freycinet National Park on my own (cue the tiny violins!!!)

Jayne: Unless, there was a crab called Sebastien, some trumpetfish and a guitarshark lurking nearby, there was no lament as Katherine drove off. Ok, maybe a small bit of guilt. Suited and booted, into the back of a rusty old truck, hopped on a boat before the boat was professionally launched behind the Governor Island. 5minutes around this bit of rock, being watched by the fur seals, we arrived at our dive site: Bird Rock. There were no birds on the rock itself and the churning water didn’t look appealing. But, the dive was a treasure trove, especially with one of the easiest accessible sites EVER! Giant rock boulders and gullies contained a variety of life. The surge was at times a difficulty, others a real joy. The trickiest moments were when going through the caverns and swim-throughs when it had to be timed well to get in to the sweet spot where it wouldn’t knock you against the sides, seabed or cave roof. Going through all these passages was fabulous. It was explained to me later that it was much to do about giving the open water diver a chance to practice old buoyancy skills before going to dive some particular wreck. A multitude of fish species that I can’t remember the names to, a draughtboard shark, old wives, secretive crayfish, massive abalones, colourful sponges and tunicates and a patchwork of encrusting algae where seaweeds and kelp didn’t grow. 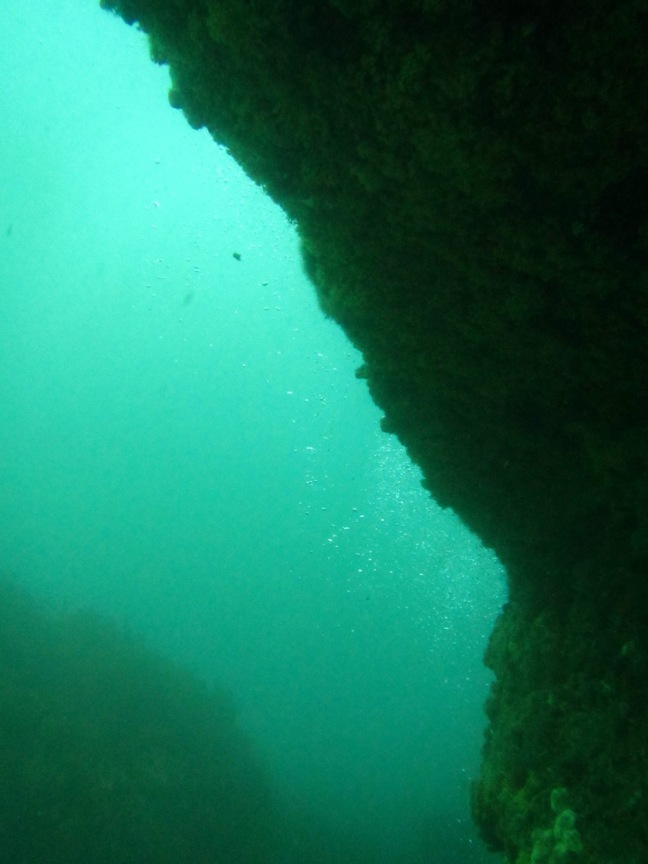 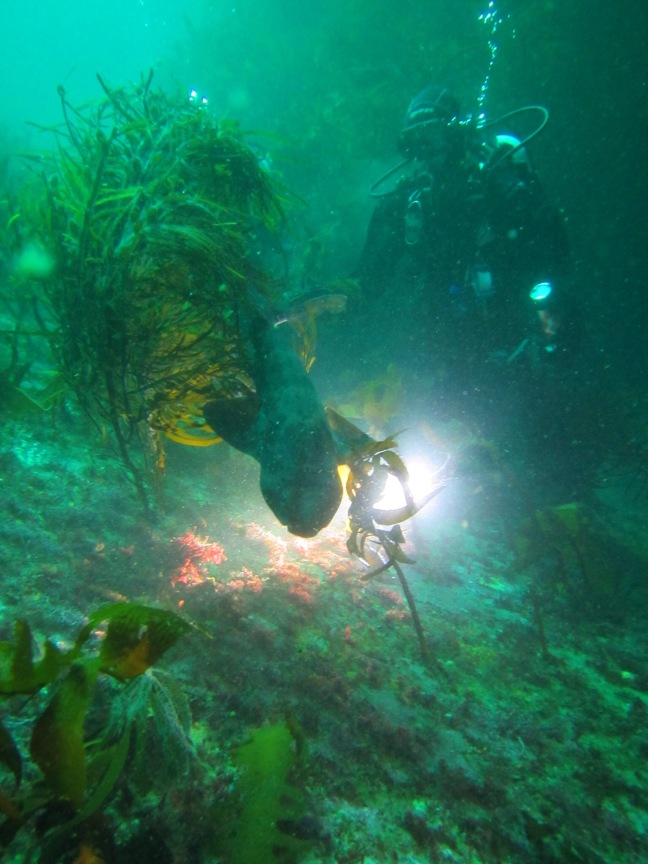 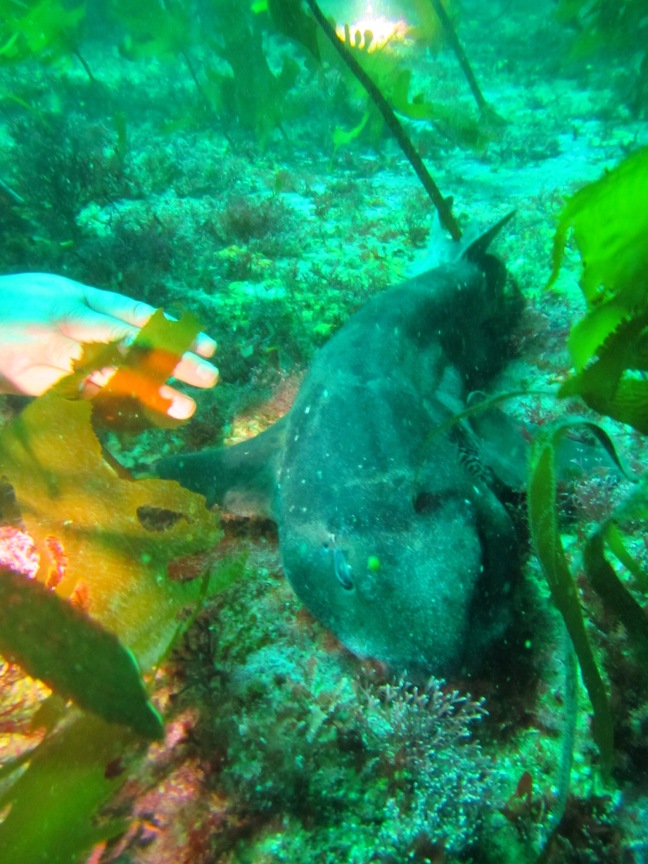 I managed to squeeze my fat ass out of a tight gap, idiot skinny people thought we would all fit through, waited for the last diver to shimmy through as well (at least it wasn’t just me), and returned to base for a hot milo and chit chat. The owner and the club are all heading off to Papua New Guinea soon and Bob and I chatted loads about hiking the Himalayas – not something he was expecting. Second dive was just Al and myself. An interesting ride down in the other jeep, with wide turns for the vehicle that didn’t have power steering, he set up a dive flag at the end of the pier and I picked up a smashed phone from the car park. This site was even better than the first – it is no wonder that so many locals dive it several times a week. Depth instantly off the pier with a beautiful mixture of granite sea bed, sandy areas and kelp forests. The pockets of vegetation were the best chances to spot the wildlife as we could hover and circle around the area with keen eyes looking for elusive creatures. We were thus rewarded with a pot-bellied seahorse and 6x weedy sea dragons. Completely over the moon with having seen these remarkable creatures I was fortunate enough to figure out the camera settings on the dive and get a few shots. Of course, all good things must come to an end and the idea of warming up was soon more alluring. 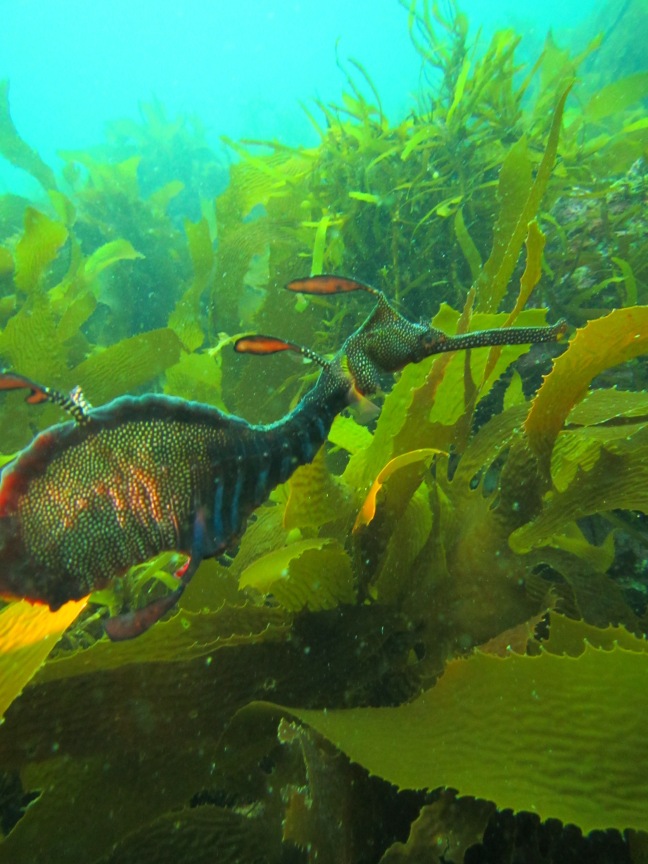 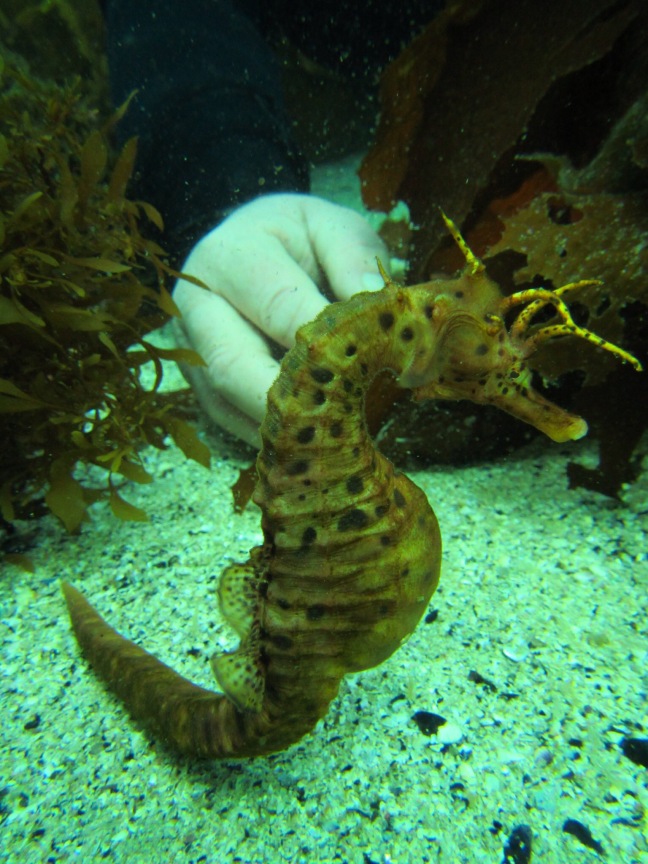 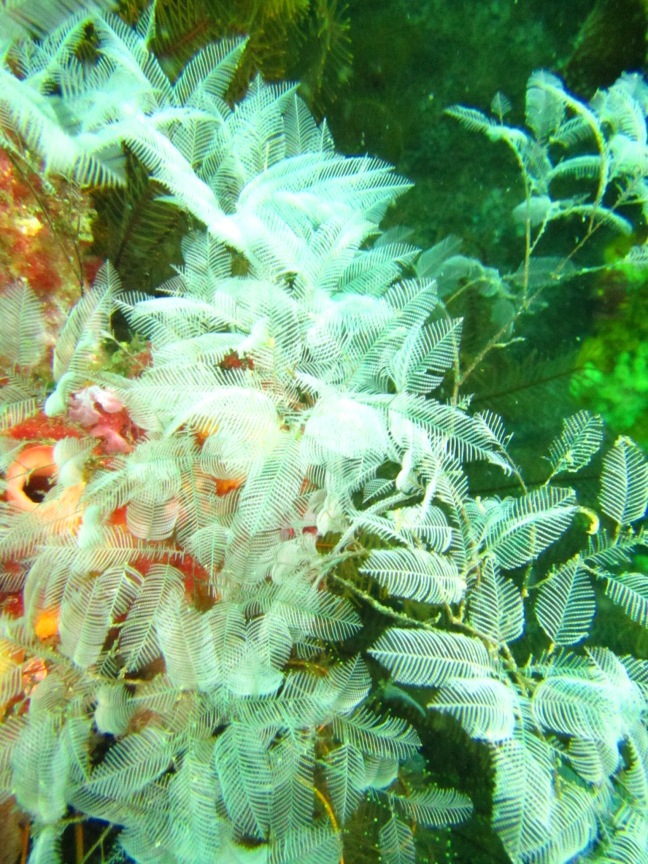 Katherine: Having paid my park permit, and receiving a free set of posters to celebrate the centenary of Tasmania’s National Parks (what am I going to do with them?!?), I started with the Wineglass Bay walk. Considered one of the most celebrated views in Tasmania, I began the steep uphill climb on a rocky, well-constructed track up to the saddle between Mt Amos and Mt Mayson. About half way up the path, I stopped to look out over the viewpoint of Coles Bay (and to catch my breathe and strip off several layers of clothing!!) which was absolutely stunning, even more so as I was the only one there! Continuing up the path, the granite rock formations were truly mesmerising especially when they were formed during the Devonian period. At the saddle, I followed the short side track that leads to the lookout with spectacular views over the crystal clear waters and white sandy beach of Wineglass Bay. 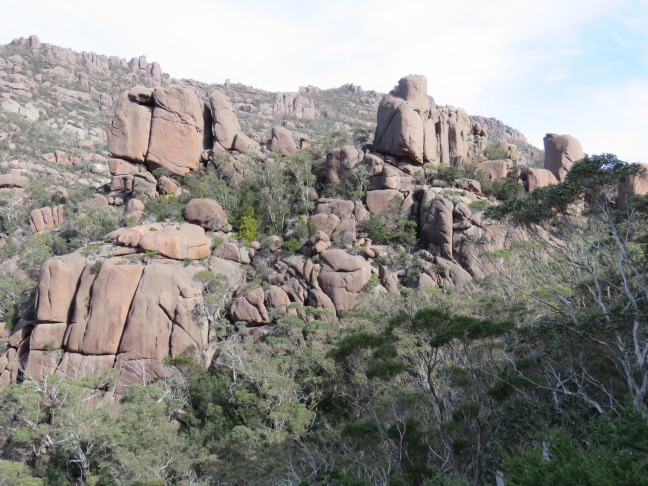 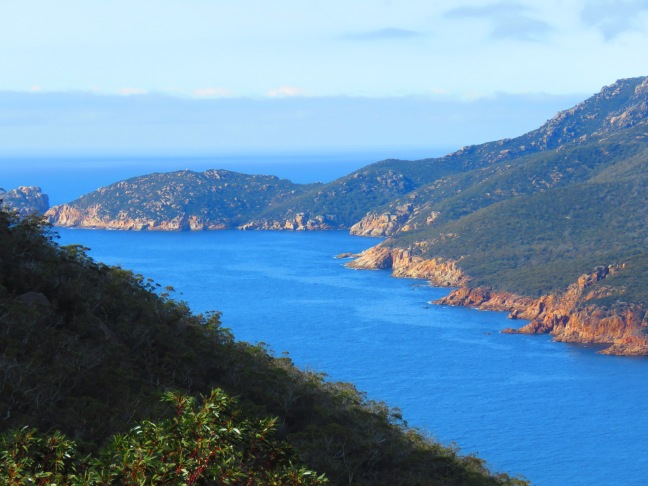 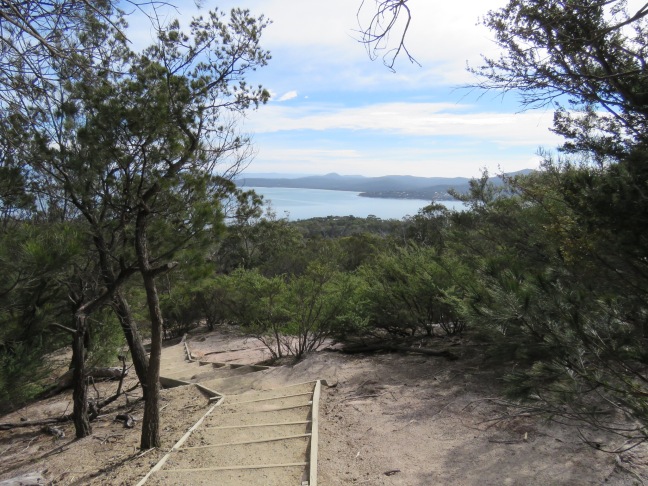 Chatted to a Welsh and Australian couple who were also travelling through Tasmania. Offered to take a photo for them and captured a beautiful one of the both of them and the view. When they returned the favour, the photo is a close up of me and not much else – so much so, it’s not even making the blog so you’ll have to put up with my poor attempts at selfies instead. If only Jayne was there with her long lucky selfie arm!!

Backtracking down to the car park, I headed back through the park towards the Cape Tourville circuit. A really easy walk with gentle slopes and no steps, the walk provided sweeping views of the Freycinet Peninsula, Wineglass Bay, the Tasman Sea, the Nuggets and Friendly Beaches. Stood looking for whales and other marine life for a while until a (very) loud American woman came and choose, despite the entire empty boardwalk, to stand right next to me to have a conversation with her husband about the lack of wild koalas in Australia.

Seeing that I had just over an hour before I needed to collect Jayne from the dive centre and I only needed 45mins to drive there, I decided to do one more walk to Sleepy Bay. I followed the gently graded steps leading to the rocky shoreline of Sleepy Bay which, despite its name, often experiences wild and rough seas. Didn’t make it all the way to the sandy bay itself as, being conscious of time, I turned around about half way and headed back to the car. 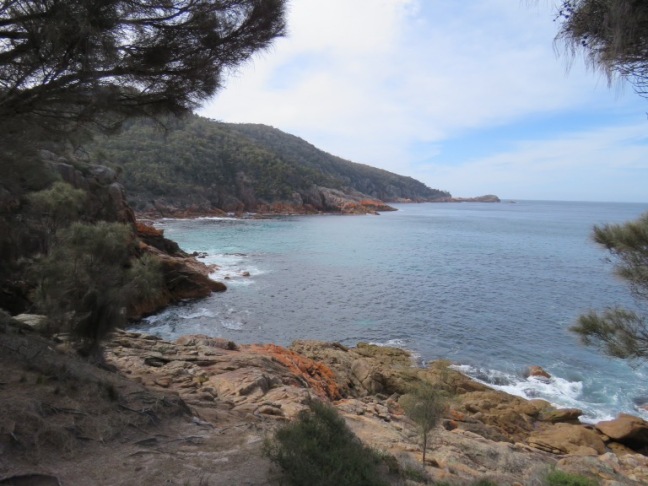 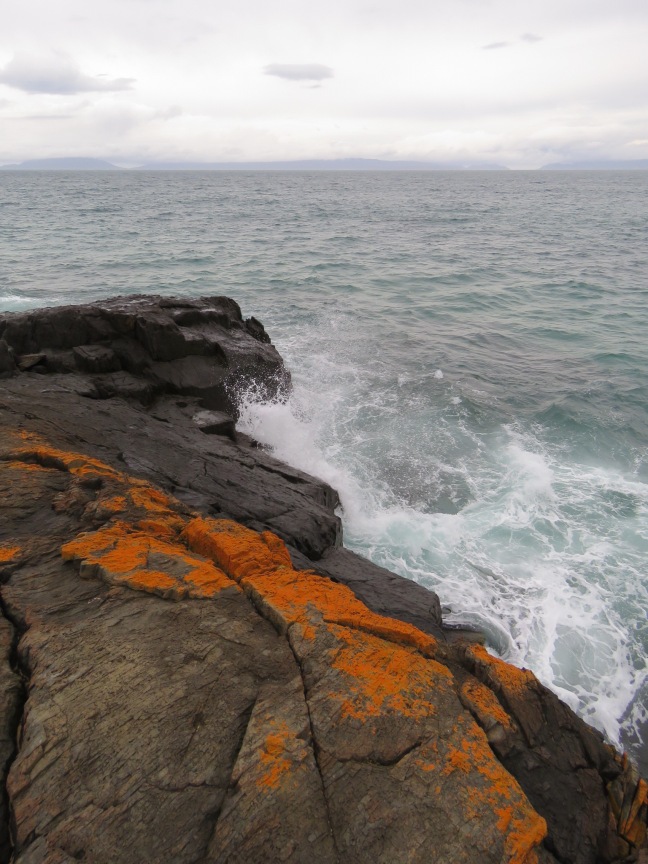 Arrived at the dive centre just before 1pm (as promised) only to have to wait for three quarters of an hour for my lovely wife to turn up – typical!! Chatted to one of the women who works in the dive centre who told me all fantastic places she has been diving in the world… I’m not jealous, not jealous at all.

Helped Jayne rinse her gear before we jumped in the car and drove to the dock where Jayne did her shore dive so she could point out where they went down and saw all the weedy sea dragons. Stopped off at the bakery on the edge of town to grab a couple of hot chocolates to warm us both up and may have, accidentally, purchased a chicken and camembert pie and a couple of caramel slices too… Oops!
An easy drive back to Hobart, stopping at Spiky Bridge on the way. As the name suggests, it’s just a bridge but it’s pretty cool. Built by convicts in 1843, this bridge abruptly pops out of the landscape to baffle passers-by with its odd design. The bridge was made from field stones laid without mortar or cement and the parapet features field stones laid vertically, giving the bridge a spiky appearance. It’s claimed that the spikes were designed to prevent cattle falling over the sides of the bridge, though no one really knows if this is true. There are also the remains of the Governor’s cottage on the hill overlooking the unusual bridge. 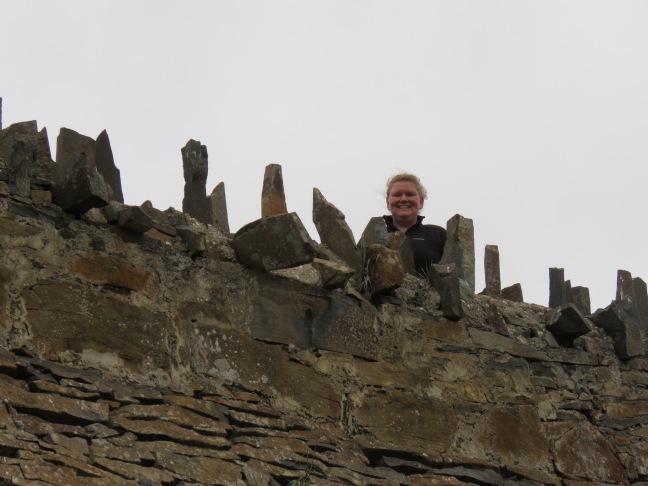 Back in the car, we cruised back to Hobart, stopping in a nearby town to waste away time in Coles buying dinner supplies as we can’t park outside the hostel before 6pm. Back at the hostel, I got busy with a much needed load of laundry whilst Jayne tackled the mess in the tiny kitchen to make us some dinner. The lovely lady at reception had put us in a dorm room on our own so we were able to snuggle up in bed, watching a film at the end of the day and looking at Jayne’s photos from the dives.