The drive out of town was easy and we got to see the changing scenery as we zoomed past in the car, as well as passing (what looked like) a cherry farm. Shame there was no fruit growing on the trees as the ones within arms reach may have been stripped bare! There was also several vivid rainbows.

Purchased our permit pass from the visitors centre and, wanting to avoid the crowds that usually turn up on day coach trips from the capital, headed straight for the popular Russell Falls walk. Considered one of Tasmania’s best knew scenic attractions, the 10 minute level ground walk dropped us right in front of the magnificent waterfall. Green and graceful ferns lined the track edges while giant eucalypts towered overhead. The tiered-cascade waterfall itself was absolutely stunning and gushing with water. So much so, it was hard to take a photo as our camera lenses kept getting wet and we needed to wipe them with a tissue after every shot to remove the water droplets.

Walking up the slope and some incredibly slippery steps, we arrived at the top of Russell Falls where you could appreciate the rush of sound that came from the amount of water passing through it every second. About 100 metres further upstream we arrived at another tiered-cascade waterfall, Horseshoe Falls. Not as big as Russell Falls but equally as captivating, Jayne managed to play around with some of the shutter speeds on her camera to get some nice shots of the waterfall.

Continuing on with our walk in the National Park, we entered into the Tall Trees walk which took us through a forest that features the world’s tallest flowering plants and one of the tallest trees in the world, second to the coast redwood – the magnificent swamp gums. A straight-trunked tree with smooth grey bark and a stocking of rough brown bark to 5–20 metres above the ground, it regularly grows to 85 metres, with the tallest living specimen, the Centurion, standing 99.6 metres tall in Tasmania. 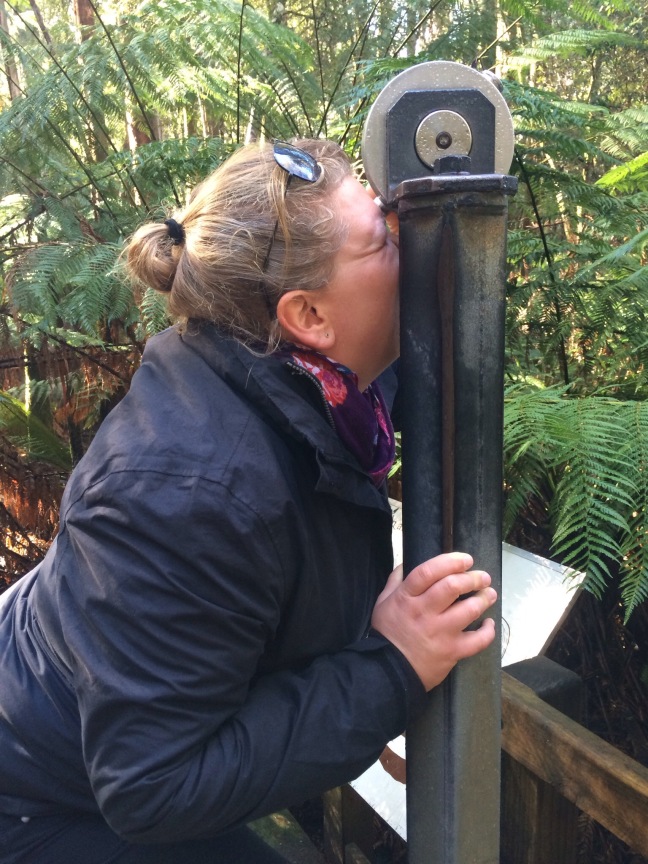 The trail took us about 30 minutes during which time we saw a pink breasted robin and a pademelon (a marsupial endemic to Tasmania). We then completed the circuit with a visit to Lady Barron falls. Another tiered-cascade waterfall named in honour of Lady Clara Barron, the wife of Sir Henry Barron, who was the Governor of Tasmania from 1909 to 1913, and Governor of Western Australia from 1913 to 1917.

Back at the visitor centre car park we decided to drive up road to Lake Dobson. The lady at the desk had assured us that the road was suitable for a 2-wheel drive car but once it started raining, the drive got a little scarier. I was able to distract myself slightly as the tyres slid about on the mud by the diversity in vegetation, ranging from tall swamp gum forests and massive tree ferns at the base of the mountain, through rainforest along the road, to alpine vegetation at the top – this park really did have it all! 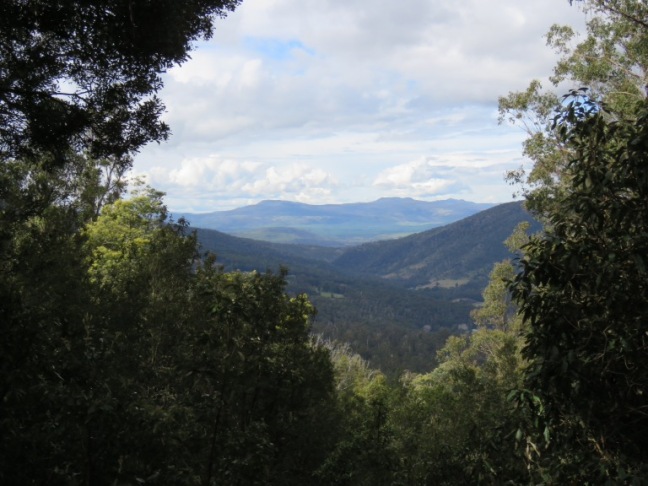 Finally arriving at the top of the road, we headed into the hut to eat our lunch. Colder inside than it was outside, at least we had some shelter from the rain whilst we ate. Deciding to put on our rain jackets and brace ourselves against the wind, snow and rain we headed out to walk around the lake. Jayne found enough snow on the ground to make a snowman (Tommy the Tasmanian Snowman) although my hands were too cold to even consider removing them from my coat pocket! 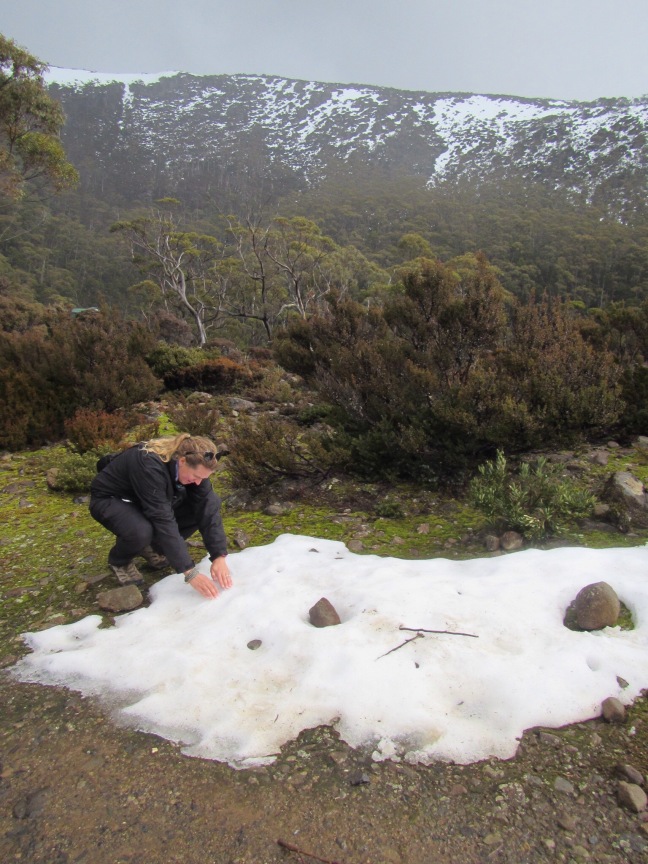 The walk around the lake is called the Pandani Grove walk and it is named after the remarkable Pandani, which is just one of many subalpine plants found in Tasmania and nowhere else on Earth. Along the walk we encountered numerous alpine plants and, it seemed like, there was a greater diversity of plants at the top of the mountain than at the base. At the end of the lake, we entered into a stunning patch of forest dominated by a mixture of pandanis and pencil pines. Pencil pines are one of a number of ancient conifers that are endemic to Tasmania. 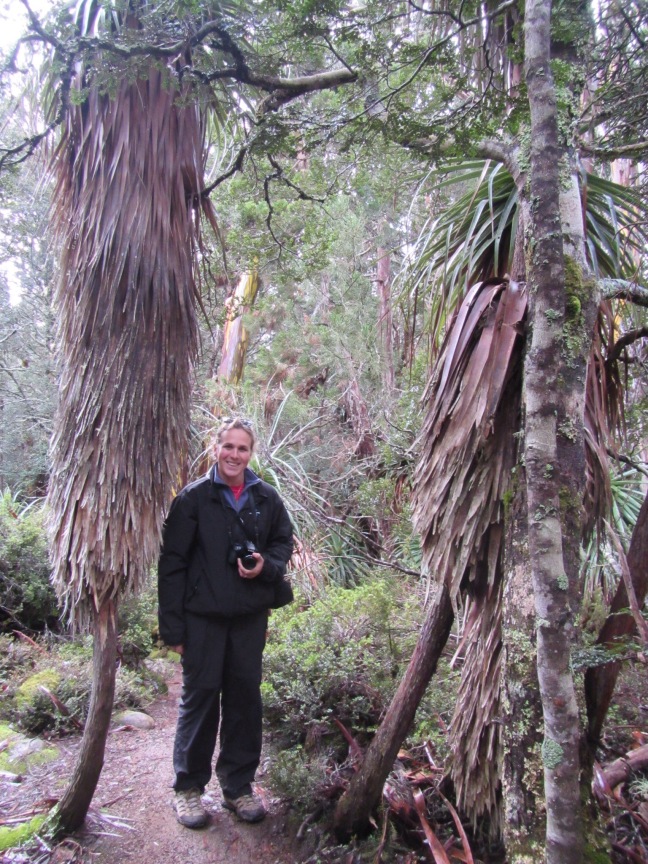 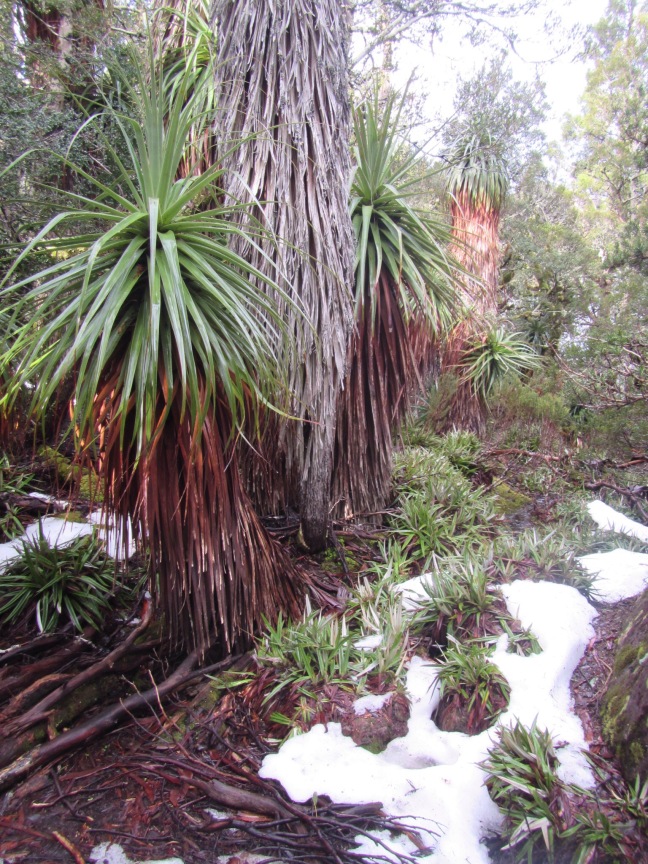 Got chatting to a local lady who was also walking around the lake and chatted about her heritage being from UK and how she came up to this region every winter with her kids to take them skiing. Continued walking around the lake, keeping an eye out for the elusive platypus that can occasionally be spotted in the lake, especially around dawn and dusk. It must have been our lucky day because the afore-mentioned lady came charging back down the path telling us there was a platypus near the waters edge. Cue, the three of us standing in the cold rain looking into the deeps of the dark lake trying to spot him again – we must have been quite a sight! Fortunately, our patience (and soaking wet feet) paid off and we got to watch him for about thirty minutes, scavenging for food along the fallen branches in the water. When he started swimming across to the other side of the lake, we said goodbye to the lady and returned to the car to blast hot air onto our soaking wet and freezing cold feet.

An easier drive back down the mountain and into Hobart. Stopped by the Botanical Gardens to have a quick look around but they closed slightly early than we had realised as it is winter! Managed to get a quick peek just past the gate but didn’t want to venture too far for fear of being looked in for the night. Drove back to the YHA where we had the usual battle to find some space in the kitchen to prepare dinner before jumping into bed to watch half of ‘Miss Congeniality’ – I was too tired to finish it and Jayne was frustrated that I had chosen the film and couldn’t even finish it… Oops!