An early start to catch our 7am shuttle bus from Shepparton to Melbourne Tullamarine airport. It meant we would get to the airport far too early for our flight to Bangkok but it saved us the hassle of getting the train and then connecting to the SkyBus once in town. Tracey was our hero, dropping us off at the pick up point and waiting until our bus turned up before heading off to work. Cue tears, hugs and silly photos as we waited – can’t quite believe our time in Australia is over. It has been epic! 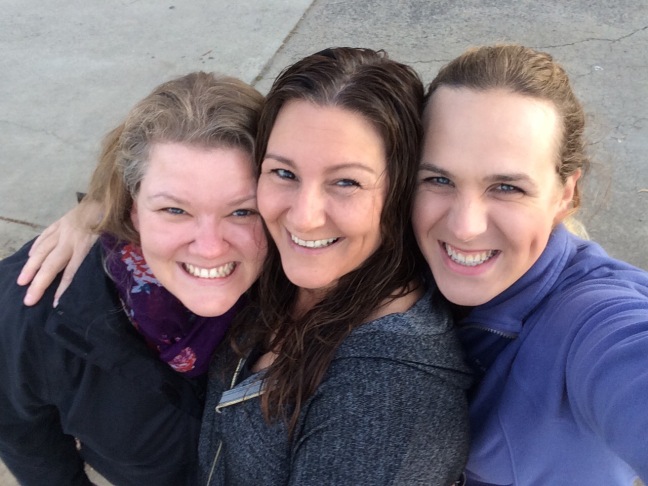 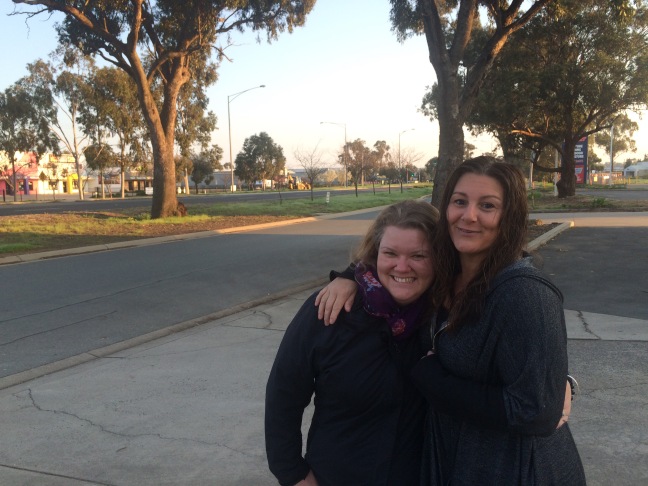 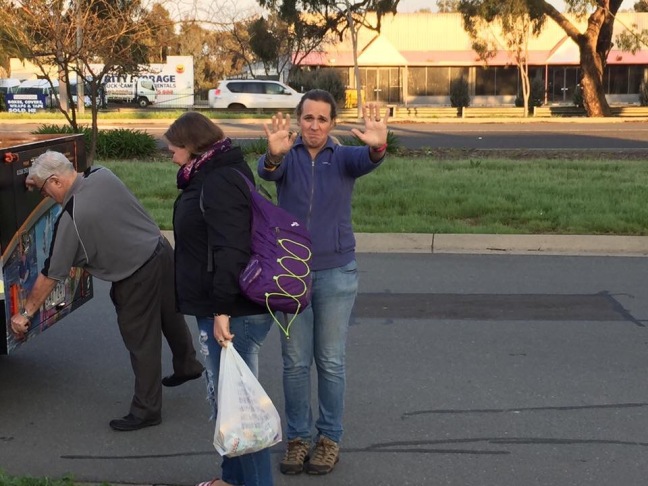 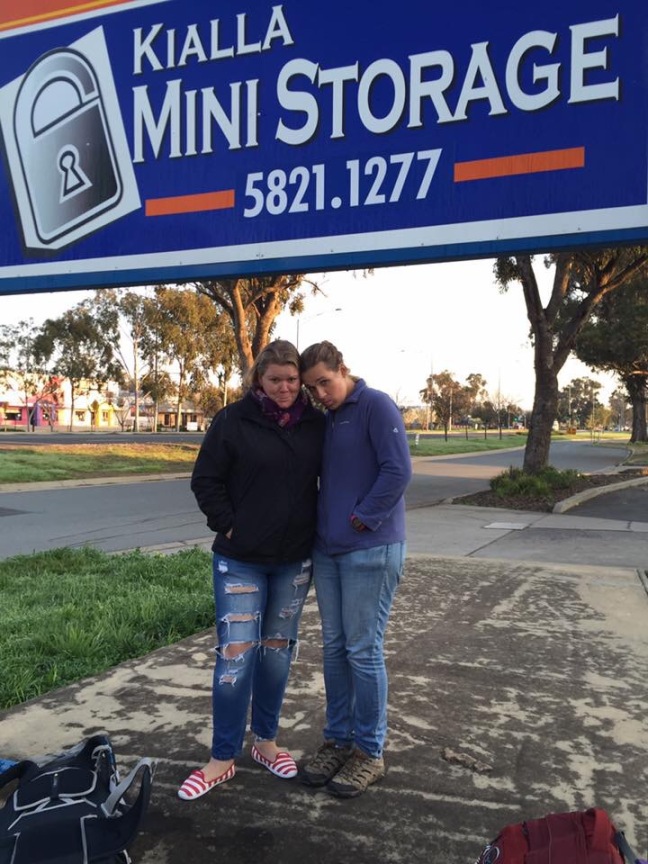 An easy bus drive, stopping in Seymour for a coffee and toilet stop before continuing onto the airport. Checked in using the machines (no human contact allowed when you are travelling with low cost airline, JetStar) only to then have an issue putting my bag through. Turns out the check in machines will tell you to proceed to the bag drop machine but they can’t quite tell you that that bag drop machine won’t check your bag until someone hidden behind a wall will allow it to! Fortunately, a passing elusive JetStar employee was walking past and managed to override said arsy and temperamental machine to check in my baggage. 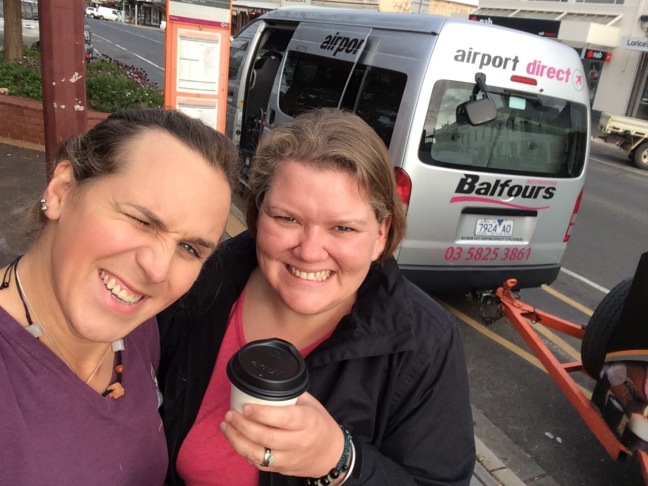 Security and border control was easy, although I still didn’t get a stamp in my passport (very disappointing Australia!!) and we waited in the lounge for our flight to be called. Got some water and a couple of magazines to pass the time before tucking into an early lunch at Hungry Jacks, knowing that we wouldn’t get food on the plane (budget airline, remember?!?). 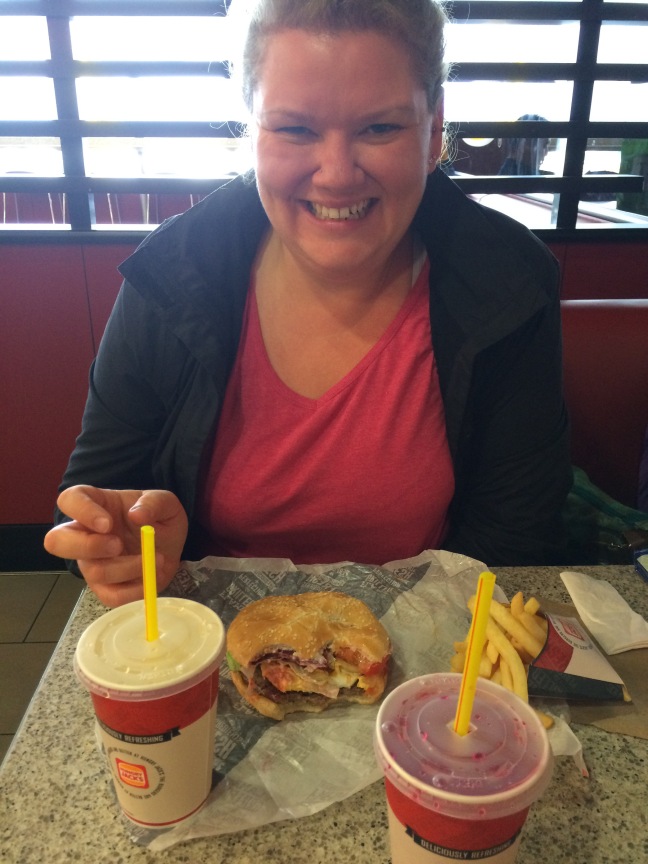 We were waiting at the gate when we got the announcement that the plane was going to be delayed by an hour. I understand that this is an inconvenience to lots of people but I always maintain that I’d rather be late than in a plane that shouldn’t be flying! Anyway, one hour turned into two and the gentleman beside us decided to use this as a chance to talk to us (we clearly still haven’t perfected that ‘leave us alone’ aura). Apparently having tried to fool the airline by not paying for checked bag and only bringing hand luggage, he was furious that they weighed his bags to find they were 7kg OVER the 7kg limit… He was then equally furious that they made him pay $120 to keep his bag. I didn’t think it was an appropriate time to tell him that I prepaid $12 for our 20kg backpack! When the announcement came that it was a three hour delay, he stormed off and we used he opportunity to find a plug to charge our phone and to swap seats. We got offered $10 food vouchers each due to the delay so Jayne went off in search of ‘second lunch’ whilst I guarded our charging devices. 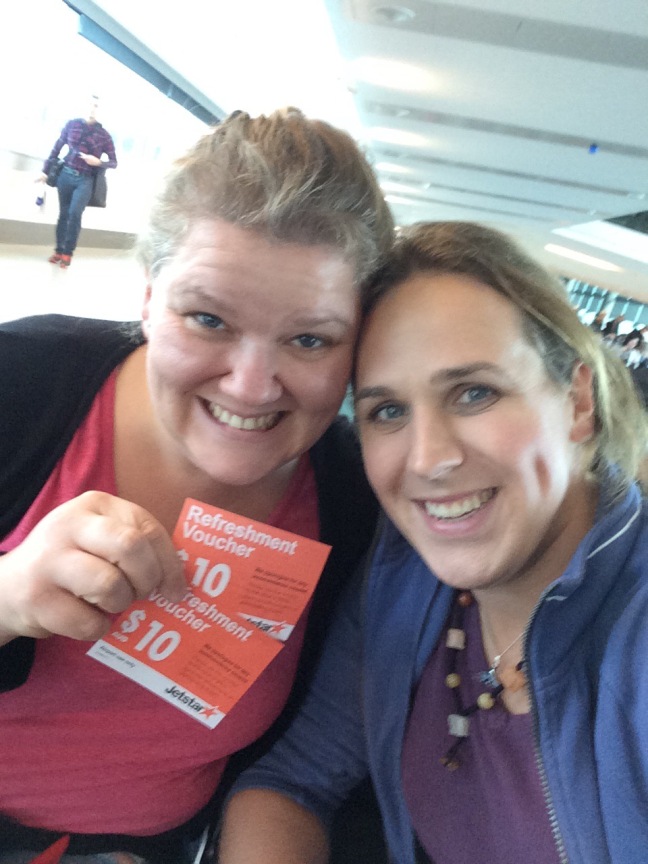 At four and a half hours delay, the announcement came through that the flight was cancelled. Shouting from other passengers occurred immediately as Jayne and I looked over in bewilderment. Our only concern was where were we going to sleep tonight?!? Marched back through passport control with security guards and collected our bags, we then headed up to the check in desk to await our fate… Fortunately, we were lucky and were about fifth in the queue. Managed to get a hotel room for tonight together since they had booked us into separate hotels, with $30 worth of food each and a new flight on a better airline (Qantas) for tomorrow although we would be going via Sydney and not direct. Not bothered in the slightest, we left the poor ladies to deal with the rest of the raging passengers and headed to our free shuttle bus to our free hotel. Checked in at the hotel and confused the reception lady who was adamant about giving us a twin room. Even when we told her we were married and wanted a double bed, she was determined to find us a twin room. Don’t think Australia really understands the lesbian thing… All sorted with a double bed, we were told that we would also receive a free glass of wine with dinner, so we booked ourselves a table and headed out for a quick walk. Nothing really to see or do, except for a selfie outside the world largest lolly (sweet) shop and bought some amuse-bouche cheesy chicken nuggets at Red Rooster(I’d wanted to try them for ages and never got around to it!). 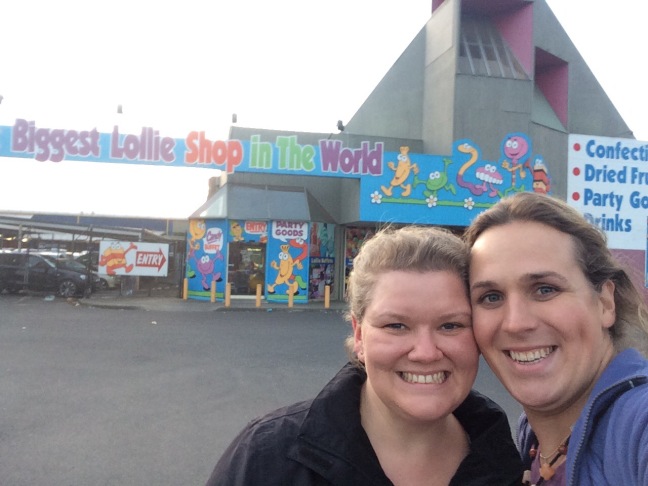 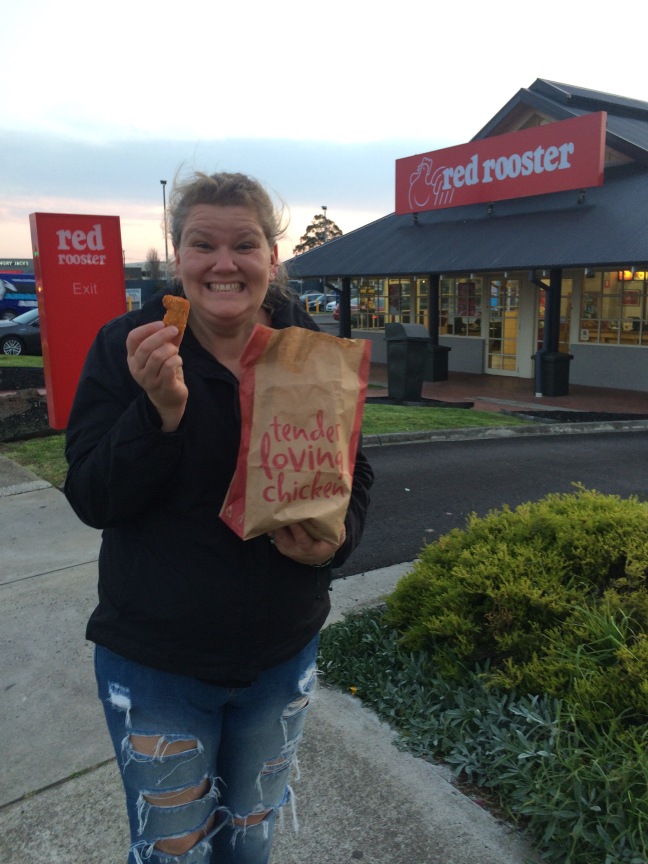 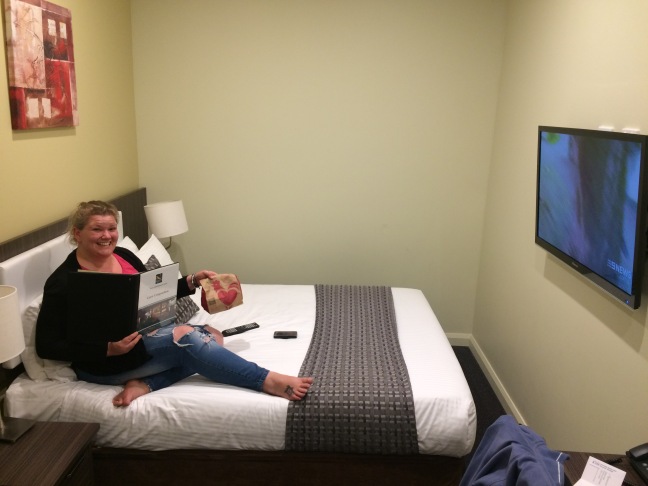 Back at the hotel for a really nice meal, we even considered it our belated wedding anniversary meal, with free wine and enough on our meal voucher for a cheeky dessert too! Back in our room to snuggle up early since we needed to be up at 4.30am to try leaving Australia again tomorrow. 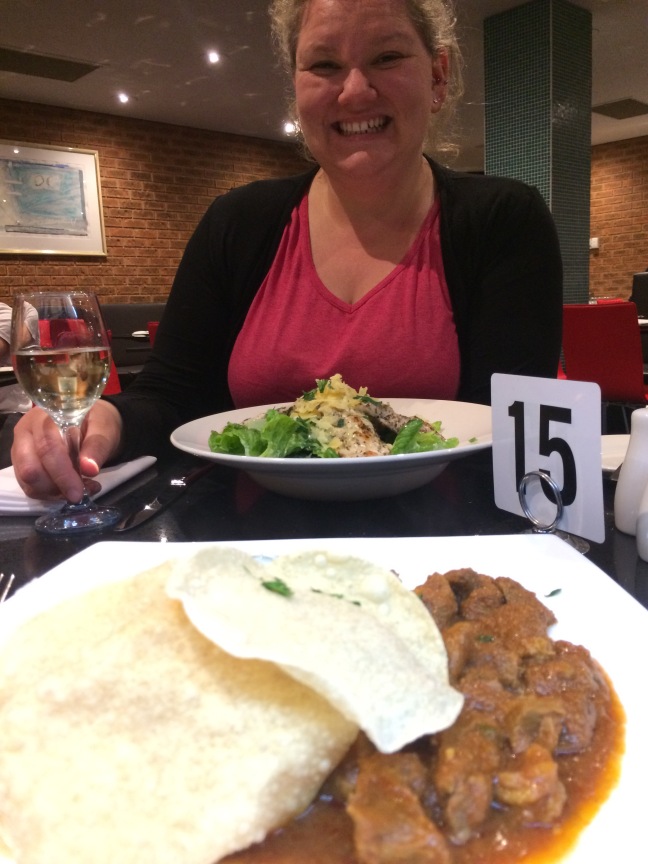 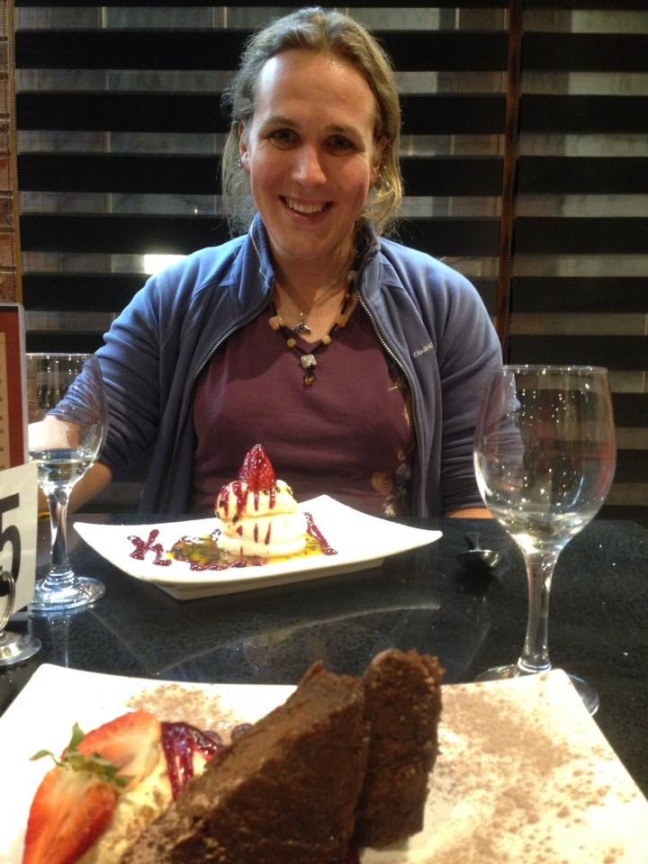