Typical… The day we have to set an alarm is the day that I don’t wake up ridiculously early of my own accord. Really wanted to throw the phone against the wall when it woke me up with its shrill musical sound. Fortunately, Jayne was in a much more functioning and capable humour. Up we got, showered, dressed and packed up our bags, ready to start the adventure again after three days of practically being hermits. Took ages for us to check out as the reception lady had gone walk-abouts and the cleaner just kept repeating ‘2 minutes’ to us. Fortunately, we weren’t in a rush so used the opportunity of an empty reception to steal a few of the lychee sweets that were in the bowl.

All checked out and good to go, we started walking towards the oriental ferry terminal. Now, I’m going to openly admit that in all the time we were in Australia we didn’t have any problems with anyone. Within five minutes of walking down the road in Bangkok, I had already been told that ‘I eat too much’ and that the ‘ferry closed on Sunday but TukTuk good price’… Oh, how I had blissfully blocked out the joys of SE Asia. Even though we’ve been here several times before and travelled this area for the 8 months prior to Australia, the culture shock was a huge smack in the face – as was the fact we had a culture shock to begin with!! Kind of assumed we’d slip straight back into the Asian way of travelling, but it might actually take a few days to get back in the swing! That being said, walking down the back streets of Bangkok was nice and the ticket man at the ferry terminal restored my faith in humanity by making me laugh. Kept saying he was from ‘wetland’ and did I know it?!? When I said ‘no’ he seemed really shocked. We then suddenly realised he meant ‘Scotland’. 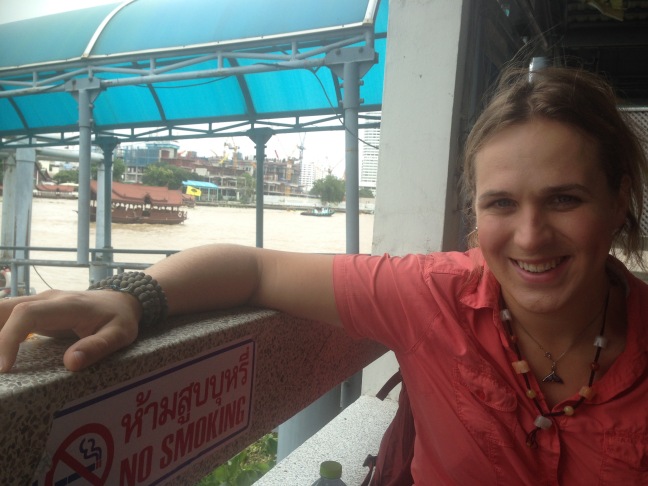 Jumped on the really crowded ferry that took us up the river. Clearly there has been a big push in recent years to clean up the river with a huge reduction in water pollution and signs everywhere warning of big fines for littering. Dropping all the other ‘white’ tourists at the Grand Palace, we were the only ones left going to Thonburi stop for the station. Jayne managed to navigate us via the hospital to find the station. Got our tickets and then waited for the train. Leaving me with the bags at the station on benches that looked like they may have been recycled pews from a church, she headed off to look around the food market. Couldn’t quite tell if it was a night market or a morning market but at the time we were there it was a little bit deserted. Bought lunch from a street vendor – papaya salad, rice and meat kebabs. Jayne described them as mystery meat but I recognised one of them as chicken hearts. Not sure what they others were but they tasted good, so who cares?!?

The train journey up to Kanchanburi was pretty easy although we were both struggling with the heat and humidity. The scenery was lush and green, baring in mind it is the wet season, and there was plenty to occupy us for the three hour journey. A Thai gentleman kept walking past us and telling us that it was ‘hot’ and then sat down next to us to say that The Beatles were his favourite band. He then proceeded to sing the opening one line from a large repertoire of their hits… It was actually really sweet, except when we tried to join in and he didn’t understand our English pronunciation, so had no idea what song we were singing… It was slightly embarrassing!!!

Arriving in Kanchanburi, we walked the 10 minutes to our guesthouse and checked in. Payed a little bit extra to sleep in one of their ‘raft’ rooms which meant we were literally sleeping on top of the river Kwai. We also had an awesome view of the river so we spent some time on our veranda enjoying the soothing sound of the water and the gentle rocking of the deck… Until the jet skis and party boat went past!!

Headed back into town to grab some water and breakfast supplies from the shop, then to the night market to get some food. An amazing array of sights, sounds and smells, we were absolutely spoilt for choice and were glad we were staying for a couple more nights so we could sample as much as possible!! Had a cheeky chocolate cake as we walked around the markets before getting a fried ham and cheese sandwich to snack on as we purchased our main meal. Bought a sample of Thai dishes to take back to the guesthouse and a slurpee too (I haven’t had one of those in ages!!!).

Ate back in our room, enjoying the air conditioning before having a quick shower to rinse of the day’s grime from the train. We then snuggled in bed watching some episodes of ‘Friends’.