Neither of us slept very well. I think we were both anxious about the upcoming border crossing. We had booked to leave at 8am from the nearby Mo Chit bus terminal to the border market town, Rong Kluea, in Sa Kaeo just on the Thai-Cambodian border. We got up early enough to take our time getting ready and having breakfast. Leaving the hotel, we made our way to the local bus stop and caught the 77 bus to the station as neither of us wanted to spend the entire day sitting on a bus having been all hot and sweaty. The bus was easy and, before we realised it, we were at the bus terminal. Jayne picked up some custard buns as a snack before we found our bus. The bus driver was a brilliantly funny guy, having a joke with the cleaner by throwing rubbish on the floor every time she swept it. Jumping on the bus, it was an easy drive along the road. The bus wasn’t too busy so the air conditioning worked perfectly as we passed the time with monopoly and watching TV shows. A petrol stop after about 3 hours meant we got a chance to use the toilet and treated ourselves to a fizzy drink and a chocolate bar.

Back on the bus we carried on passing the time with ‘Game of Thrones’ as the bus got busier and busier, meaning that the air conditioning becomes less and less effective. Also, as we got closer to the border, more people got on the bus and with each new passenger we were worried that they might be one of the aggressive visa pushers that kept getting mentioned on the Internet forums. Fortunately, we arrived at the border market with no problems. As soon as the bus had stopped, the luggage compartment door was pulled open and a handful of men stood close by. As Jayne looked after the two smaller bags, I grabbed our big bag and put it on. One man asked if we needed passport photos and when we said ‘no’, we had no more hassle. Walked through the Thai border section to get ‘stamped out’ with a total of 3 people in front of us. Took about 5 minutes maximum to officially leave Thailand before taking the path to pass by the casinos in ‘no mans land’. Arriving in Cambodia, we had to cross the road to go to the ‘visa on arrival’ office. Filling in the forms, we were the only tourists in the room with a dozen Cambodian officers. As we went up to pay for our visa, there was a clear printed sign stating ‘$30’. So when one officer showed us a scrappy piece of paper with ‘$30 + 100 Baht’ scrawled across it, I questioned it. He only insisted once more to pay the additional 100 baht before taking our $60 dollars for 2 visas. I asked if I could use the toilet, at which point he told me ‘no water’. I’m guessing that, had we paid the 100 Baht, there would have been water in the toilet!! Got the visas in our passport within minutes and we walked towards the immigration point to get ‘stamped in’ to Cambodia. Despite all the experiences that other people have had with this border, we didn’t have the same issues. Even the guard that tried to get the extra 100 Baht each out of us didn’t try too hard!

We didn’t get on the ‘free’ shuttle bus as, after nearly a year of travelling, we know that nothing is really free and opted to walk the one kilometre to the bus station instead. Tried every ATM we came across but none of them accepted our card – Jayne thinks it might be a way of getting tourists to exchange money at one of the hundreds of exchange shops in the town. Fortunately, we had extra US dollars with us so we were able to pay for our mini bus ticket to Siem Reap.

Despite it only being a three hour journey, we had the obligatory ‘rest stop’ at a restaurant in the middle of nowhere with inflated prices. Whilst the other passengers ate some food (and paid for the drivers dinner) we found a quiet spot to sit down and wait until the bus left. The view was beautiful and there was a kid playing football (who didn’t want us to join in…). 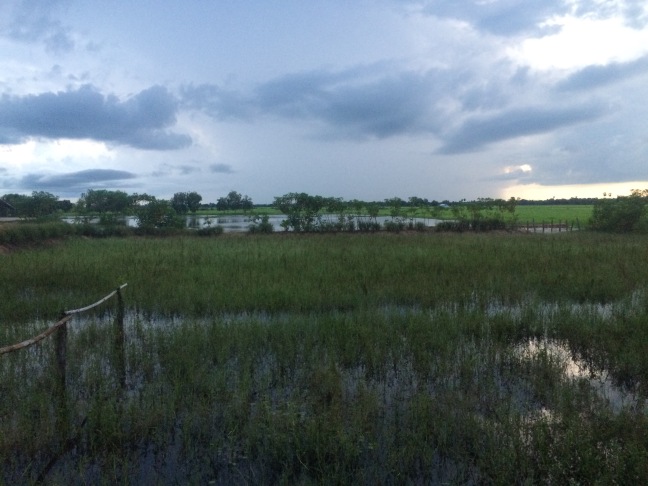 Back on the bus, we arrived at Siem Reap and, deciding to stretch our legs, walked the 4 kilometres to our hotel through the main streets in the town. Checking in, we headed to the nearest (and only) restaurant open and order dinner. One of the starters was fried tarantula, which Jayne wanted to try…

Having changed her mind, she ordered beef with red ant instead. A nice meal, even if it was a little bit odd! Jayne had to pick through her meal to find the edible parts as it seemed that they had simply cooked the entire branch covered with ants!! I went for a less adventurous duck breast soup (which was amazing!). 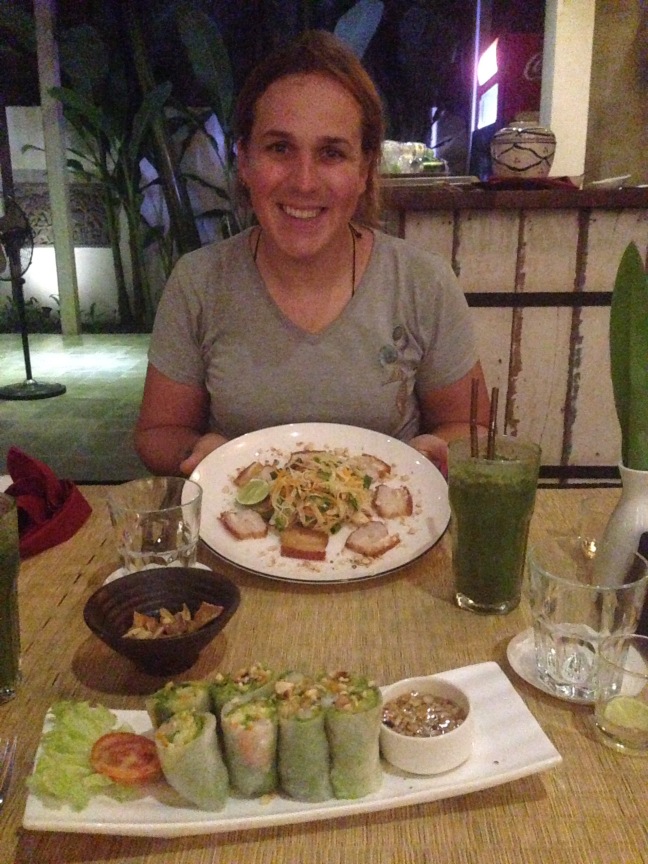 Walked the 50 metres back to our hotel and headed straight to bed, looking forward to a decent nights sleep for the first time in a couple of days.