Having had a lazy day recuperating yesterday, we decided that (despite some sniffles) we were going to head out to the Angkor Wat temple complex and complete the 26km big circuit. Having booked a motorbike through the hotel last night, it was a little bit frustrating to find that it hadn’t been delivered at 9am and we had to wait for over half an hour for it to arrive – with no petrol! Topping up with petrol we headed down the road, had our tickets stamped and were off to our first temple of the day – Pre Rup. The temple consisted of a pyramid shaped temple mountain with the uppermost of the three tiers carrying five lotus towers. The brick sanctuaries were also once decorated with a plaster coating, fragments of which still remain on one of the towers; there are some amazing detailed lintel carvings here. Several of the outermost towers are perilously close to collapse and are propped up by an army of dodgy wooden supports. It is suggested that the temple may have served as an early Royal crematorium as Pre Rup means ‘Turning the Body’.

Avoiding the crowds of ladies trying to sell us anything from their vast collection of t-shirts, trousers, souvenirs and cold beverages, we were back on the dodgy bike (I could only start it if Jayne wasn’t sitting on it) and headed down the road to Eastern Mebon. The Hindu temple is a smaller version of Pre Rup. The temple mountain form is topped off by a quintet of towers. The elaborate brick shrines are dotted with neatly arranged holes, which attached the original plasterwork. The base of the temple is guarded at its corners by perfectly carved stone figures of elephants, many of which are still in a very good state of preservation. The earthen ramps that flank the side of the temple are a clue that this temple was never finished and show how the temples were constructed. 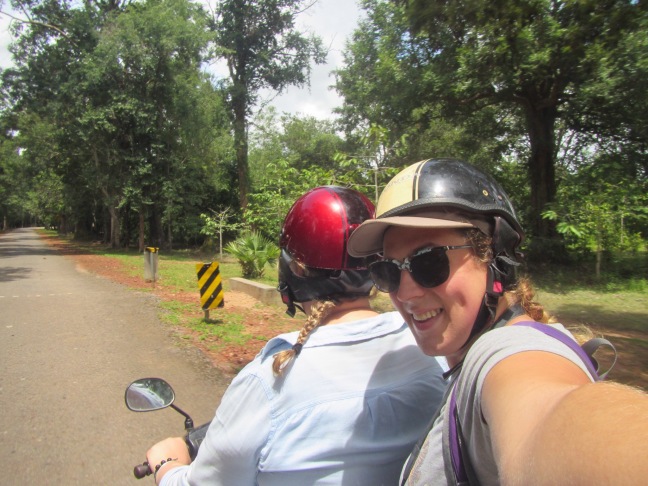 Slightly further down the road was Ta Som, a late 12th century Buddhist temple. The most impressive feature at Ta Som is the huge tree completely overwhelming the eastern gopura (entrance pavilion in traditional Hindu architecture).

Back on the bike, we drove to Preah Neak Pean, another late 12th century Buddhist temple. It’s a large square pool surrounded by four smaller square pools. In the middle of the central pool is a circular ‘island’ encircled by the two nagas (mythical serpent, often multi headed) whose intertwined tails give the temple its name (Temple of the Intertwined Nagas). The temple is restricted to only the edge of the complex and is accessed by a wooden causeway. The central pool used to have four statues but only one now remains. Water once flowed from the central pool into the four peripheral pools via ornamental spouts in the form of an elephant’s head, a horse’s head, a lion’s head and a human’s head. The pool was used for ritual purification rites.

The next temple we visited was Preah Khan (meaning Sacred Sword). One of the largest of the complexes at Angkor – it is a maze of vaulted corridors, fine carvings and lichen-clad stonework. Probably served as the Royal residence while Angkor Thom was being built, this temple was immense! Phreah Khan covers a large area and it took us over 90 minutes to explore it (and I’m sure we probably missed some things!). The temple itself is within a rectangular enclosing wall of around 700m by 800m. Four processional walkways approach the gates of the temple, and these are bordered by a stunning depiction of the Churning of the Ocean Milk, although most of the heads have disappeared. From the central sanctuary, four long, vaulted galleries extend in cardinal directions. Many of the interior walls of Preah Khan were once coated in plaster that was held in place by holes in the stone. Today, many delicate reliefs remain including rishi (Hindu wise man) and apsara (heavenly nymph) carvings. 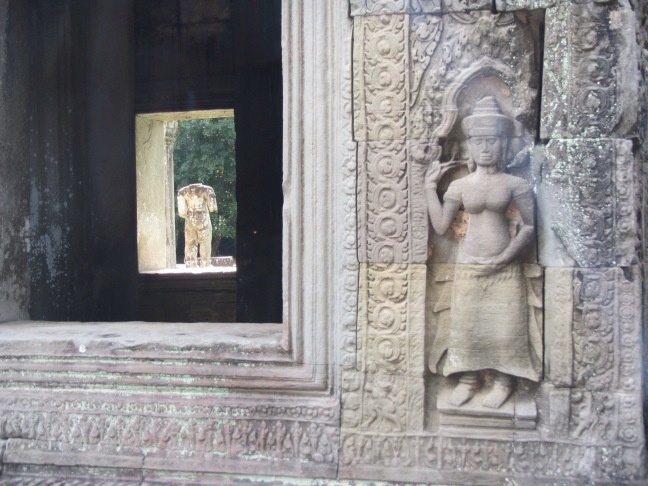 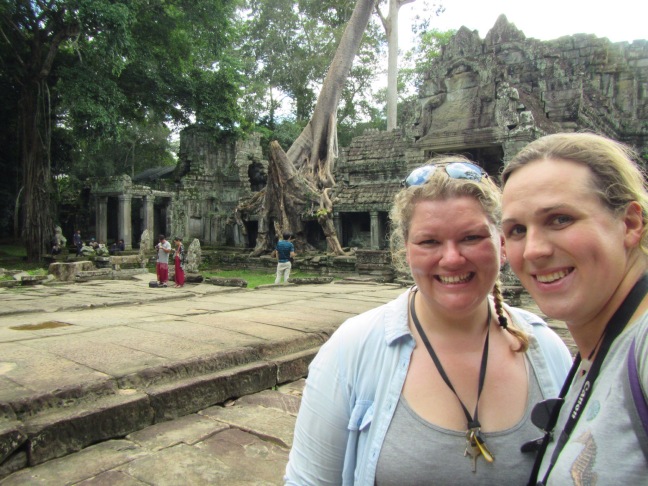 Passing through and stopping at the North gate for a couple of photos of the absolutely stunning gateway we continued to Phnom Bakheng, the popular sunset point.

Visitor numbers have been been restricted to just 300 people at any one time which meant we had to arrive pretty early (4pm for a 5.55pm sunset). Climbing the hill up to the temple was a bit tough after spending all day in the heat and humidity but we made it to the top and were one of the last people to be allowed in. The temple mountain has five tiers, with seven levels (including the base and the summit). At the base are – or were – 44 towers. Each if the five tiers had 12 towers. The summit of the temple has four towers at the cardinal points of the compass as well as a central sanctuary. All of these numbers are of symbolic significance. The seven levels, for example, represent the seven Hindu heavens, while the total number of towers, excluding the central sanctuary, is 108, a particularly auspicious number and one that correlates to the lunar calendar.

Unfortunately, there were too many clouds in the sky to experience the ‘proper’ sunset experience however the colours in the clouds over the Western Baray was beautiful and well worth the wait.

Back on the bike, we made our way in the dark back to our hotel, dodging the insects that were attracted to the headlights. Dropping off our cameras and bags, we took the bike into the centre of town to get some dinner. Knowing that we needed to return the bike by 9pm, we weren’t too worried when the heavens opened at 8.10… Even when it was still raining hard at 8.30… However, at 8.45 we started to get a bit worried, had to bite the bullet and drive home in the pouring rain. It wouldn’t have been too bad except all the streets were flooded and I am truly surprised that the motorbike got us home at all, especially as in some sections we were mid calf deep in water!!

Totally drenched, we stripped off our clothes, had a warm shower and relaxed with some ‘Modern Family’ on the iPad before going to sleep.