Since we had an early bus, we had to get up early to pack away the clothes that we had hung up around our room last night. Most things had dried, I think – or maybe they still have some moisture in them… I’m sure we will smell delightful in a few days!! We had waited to do Jayne’s injection until we could find a safe place to dispose of the needle – fortunately, the pharmacy attached to the guesthouse had a sharps box so I was good to stab her with sharp needles!!! Managed to get everything sorted and we were ready with enough time to eat our slightly stale generic brand cornflakes with Milo chocolate milk.
The mini bus drive to Sihanoukville was easy except for the three irritating Australians sat behind us. Even our headphones and loud music could barely drown out their ridiculous conversation and frustrating travel bragging. It was made even worse by the metre by metre run down of how close they were getting to their hostel only to then be subjected to repeats of ‘where are we going?’, ‘It’s too far away!’ and ‘Oh no, we’ll have to get a TukTuk’ for the last ten minutes of the journey as we drove further away from it. When we arrived, they even refused to get out of the minibus as we weren’t at the bus station. Had to point out that we weren’t on a BUS and that’s why we weren’t at the BUS station. We chucked our bags on our backs and walked quickly away from them and up the hill to our guesthouse. Must have been there for all of two minutes when it began raining – and it wasn’t light rain. It was full-on typhoon type rain, so relentless that with the pounding of raindrops on the roof we could barely hear each other speak!

From previous experience, the rain in SE Asia usually stops after a while. However, this was clearly no usual SE Asian rain storm – it went on all afternoon! Just when we thought it was slowing down a bit, it would pick up again with incredible gusto! Even the guesthouse staff seemed surprised at how long it was lasting. Fortunately, the guesthouse has a bar, restaurant, pool table and decent wifi so we were able to entertain ourselves for the rest of the morning and early afternoon. The guesthouse manager was apologetic about the rain but, actually, it suited us fine. There isn’t much to do in Sihanoukville apart from go to the beach or get wasted. We had come so we could see the beach in Cambodia and to visit Narae’s friends vegan cafe (which was closed on Mondays) but we weren’t too disappointed that we couldn’t even get there. We are both tired and could definitely do with taking it slower than we have done in the past. 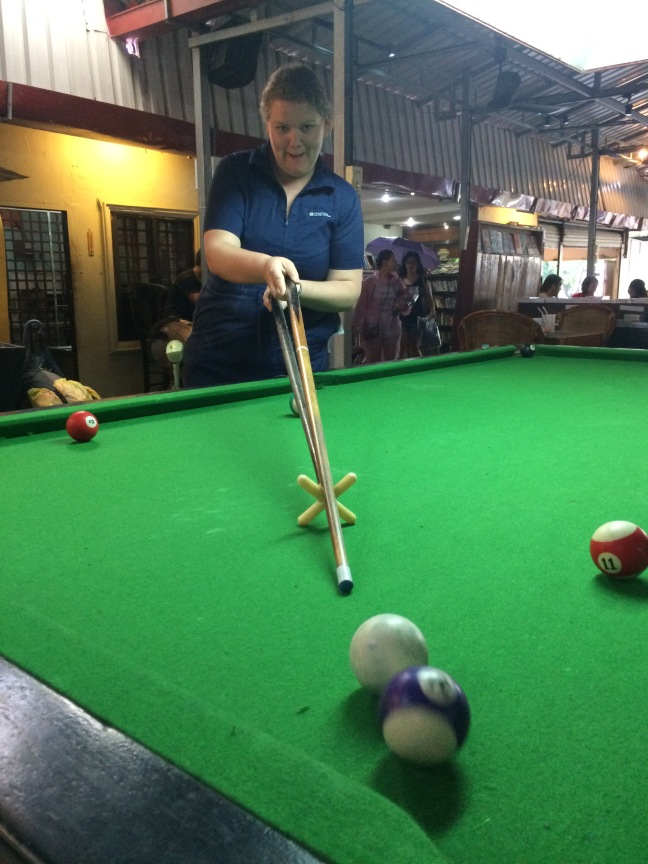 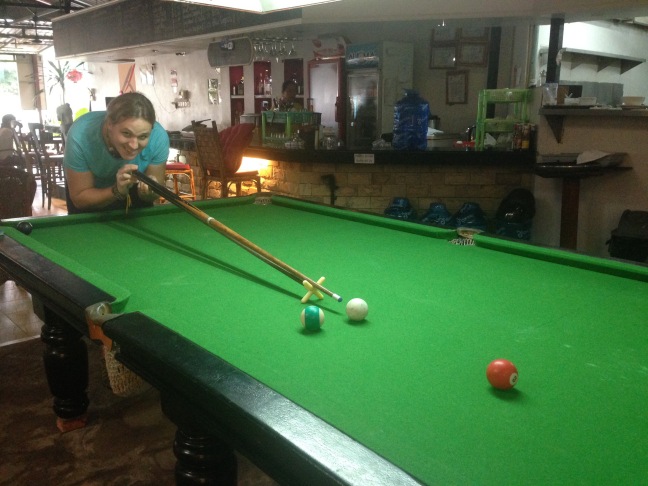 A little bit of google searching and we found a cinema just opposite our guesthouse. I say a cinema but it was a place where you rented a private room full of sofas and a huge screen to watch any film from their collection. It was actually kind of amazing and makes me really tempted to turn our spare room into a cinema when we get home…

We choose to watch ‘Mike and Dave need wedding dates’ and ordered a four cheese pizza too, although we declined the offer to make it a ‘happy’ pizza.

The film was funnier than either of us expected and it was a great way to waste away a wet afternoon.
When we left the cinema, the rain had slowed to a light drizzle so we headed to the beach to have a look. 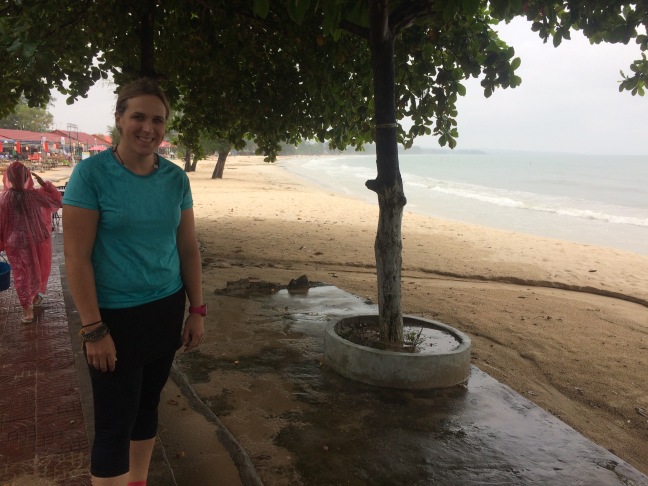 The people stood outside each restaurant and bar trying to entice people in as they walked past with special food or drink offers seemed more in keeping with Magaluf than with Cambodia but I guess it is known for being a bit of a party place in the high season.

Back to the guesthouse for a couple of games of pool – Jayne beat me both times. In fact, on the first game, she had managed to pot all her balls and the black before I even got a chance to pot one of mine! An episode of ‘Quantico’ before snuggling down in our bed with comfy mattresses – it must be a southern Cambodia thing.
Monday 10th October 2016